The 15 Best Dressed NBA Players (Plus Some of The Worst) 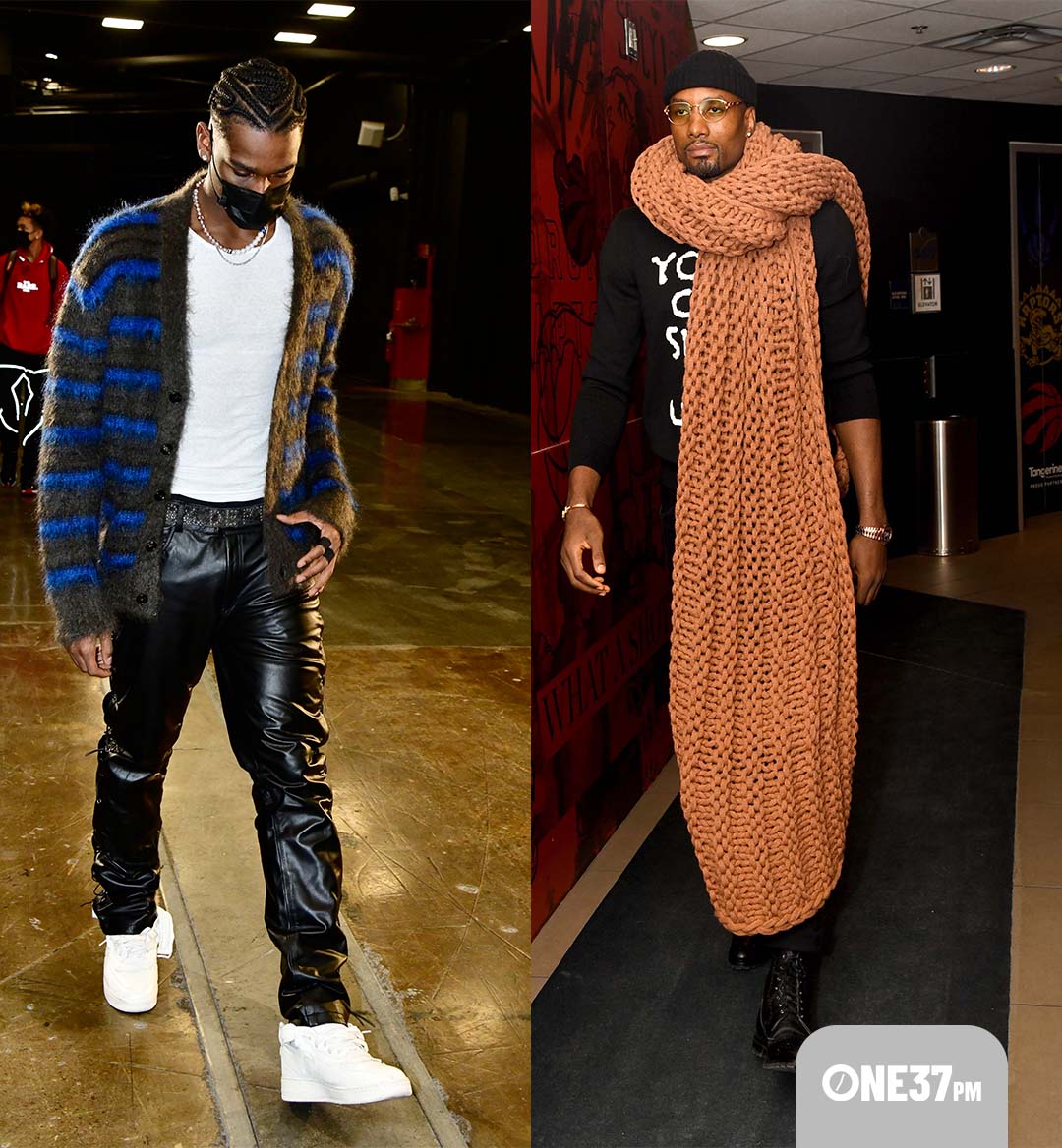 In the past 20 or so years, the NBA tunnel has become one of the most-discussed style environments outside of the fashion world. There are some players who just come to hoop and don't engage with "tunnel fit" culture, but then there are those who have come to view their arrival to each game as a pseudo-runway, donning their very best to get flicked up. From the iconic to the jaw-droppingly heinous, here are the best dressed NBA players in the game, plus a few of the worst for good measure.

These are the cream of the crop, the players who view the tunnel as an avenue for personal expression through what they wear. Some of these players have some misses, but that's to be expected when they commit to experimenting and pushing boundaries with their daily fits. The best-dressed NBA players are the hoopers who have donned more hits than misses by a wide margin. 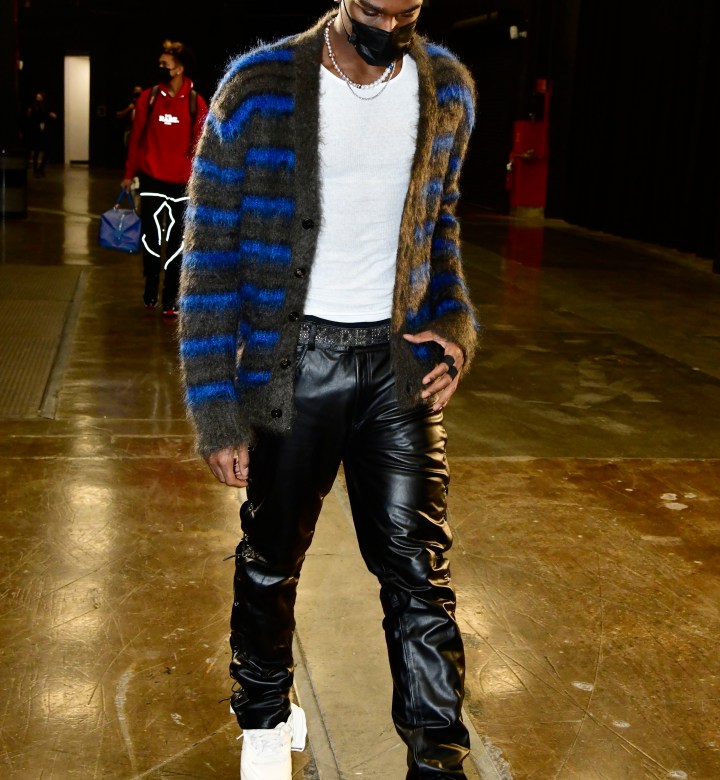 Shai kills it every time, that's all we have to say. He knows his proportions, and he knows how to work them. This fit has some beautiful textural contrast with the Marni mohair and the leather pants, and the Comme forces just tie it all together. What's more, we had a hard time choosing just one outfit to judge from him.
He's so good. 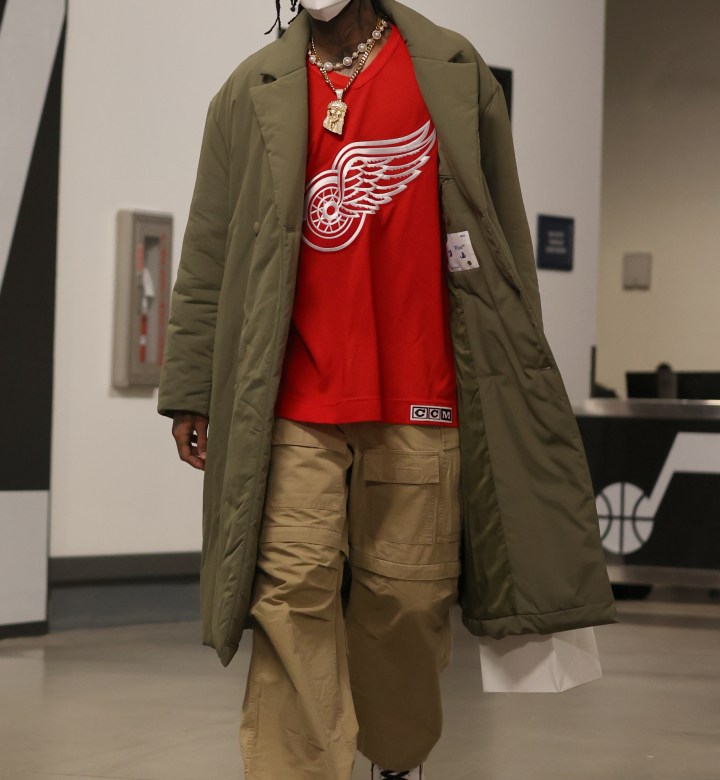 Jordan Clarkson knows how to make oversized clothing work on an NBA player's frame, and that's commendable to say the least. This fit here has some nice color blocking, mixing neutral tones with the Red Wings jersey and the color hits on the Off-White 2s. 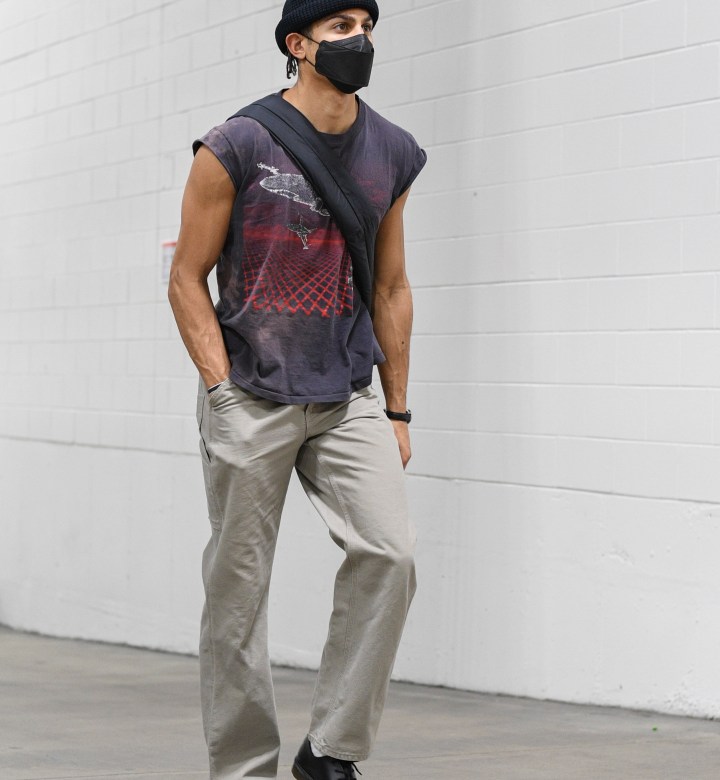 Frank Jackson isn't exactly an all-star player on an all-star team, but luckily it gives him plenty of time to think about fashion. He's always full of surprises, rocking a nice punk look with his Raf Simons Doc Martens here. The sleeveless tee is a bold choice, but he really makes it work. Sometimes his fits can be a little basic, but they almost always look good. 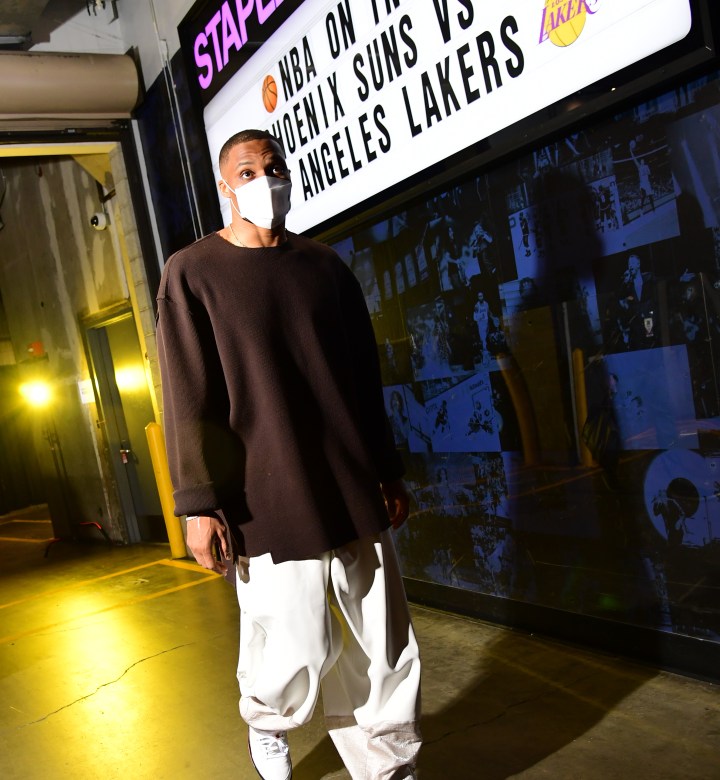 Russ has probably gone through the greatest fashion transformation in the league, and for that we love him. He always had his ear to the ground when it comes to clothes, and recently it has really clicked. We can forgive the 2014-2015 era for him, because let's be honest, it was a cringe period for all of us. Here he's having a little oversized y2k moment, and it's smooth as butter. He even knew to cuff the sleeves, unlike somebody in their pink Raf sweater (staring deeply into your soul, Kuz). 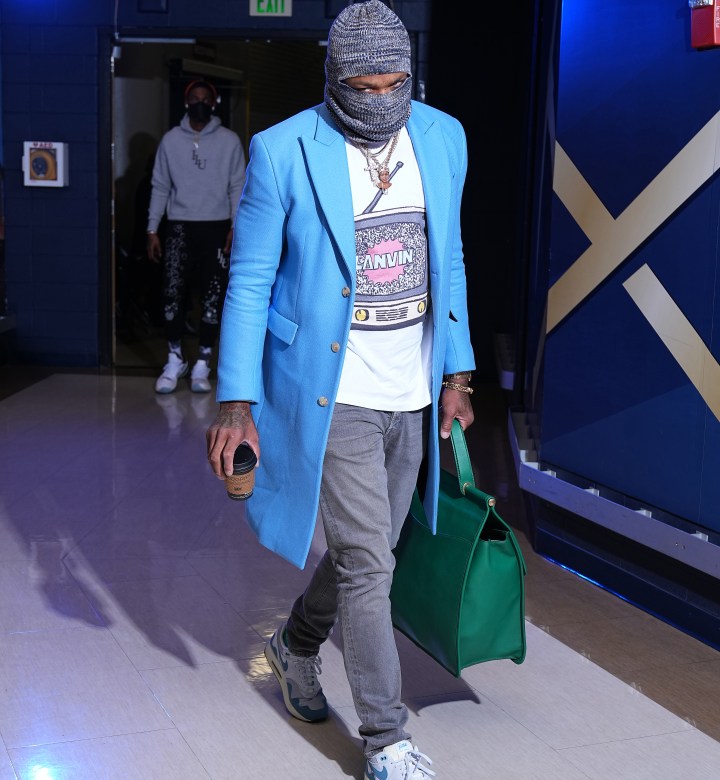 PJ Tucker has easily the best sneaker collection in the league. He's full of surprises like unreleased and f&f Jordans, OG Yeezy's, and the latest in dope sneaker collaborations. The tones on this outfit are nice, cool, and collected, and really make the Patta Air Maxes pop. Also, respect the balaclava movement. I could've gone for some baggier pants here, but that's a personal choice rather than an objective fashion decision. 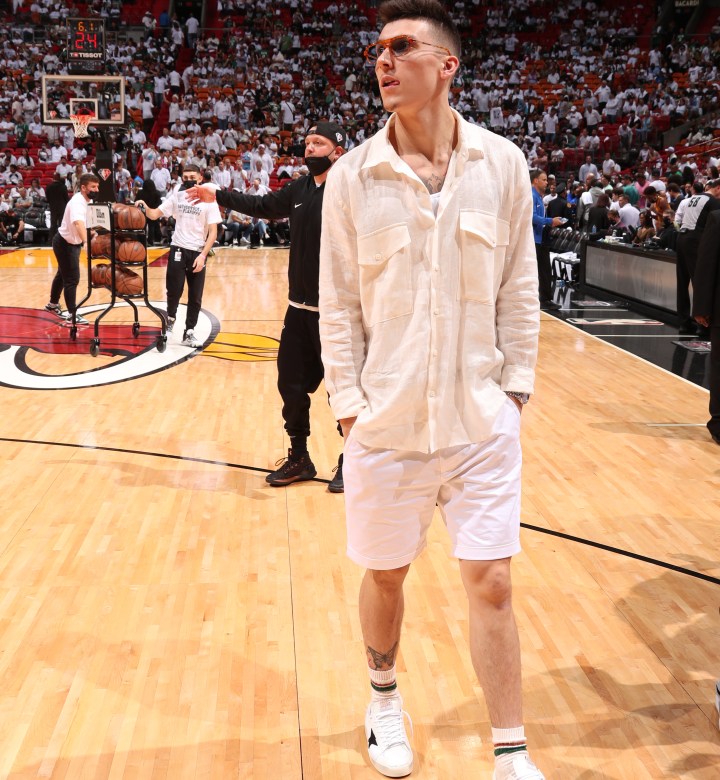 We call Tyler Herro "Mr. Cool" around these parts. Herro always has some sort of drippy look going on, which is usually accompanied by shades and a nice pair of kicks. Very Miami Vice if you ask us. 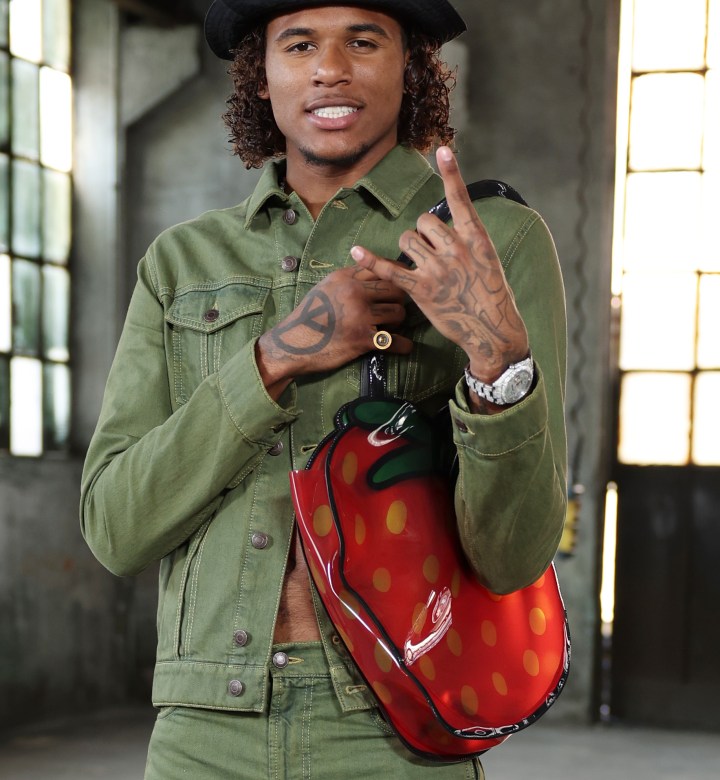 Jalen Green is being invited to shows. Moschino fashion shows at that. Those invites aren't just handed out to everybody. In order to attend, you have to show that you have a great sense of style yourself. Green's style is very eclectic, and we love it. 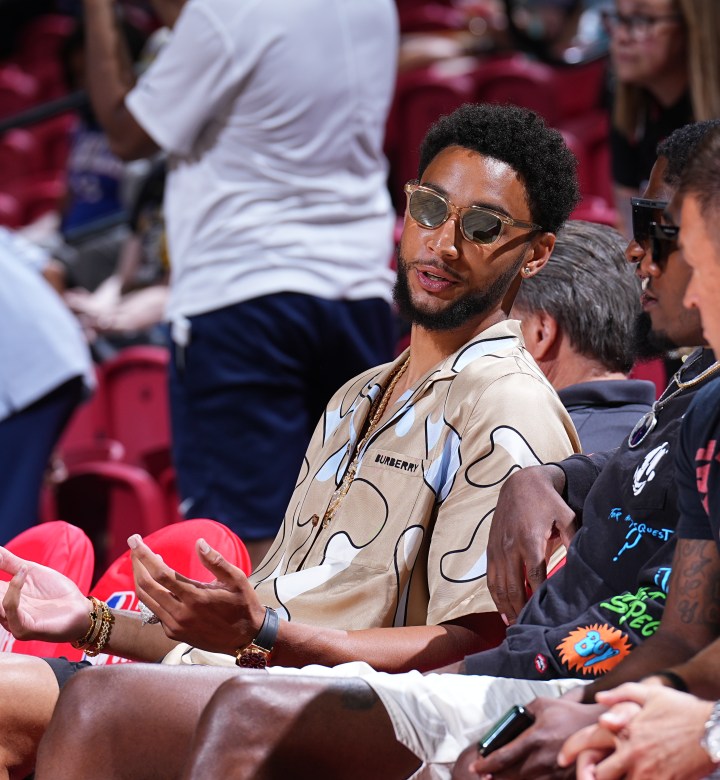 Ben Simmons pulled up to Summer League in the Burberry y'all. We're feeling the retro 1970s look Ben has been sporting lately. 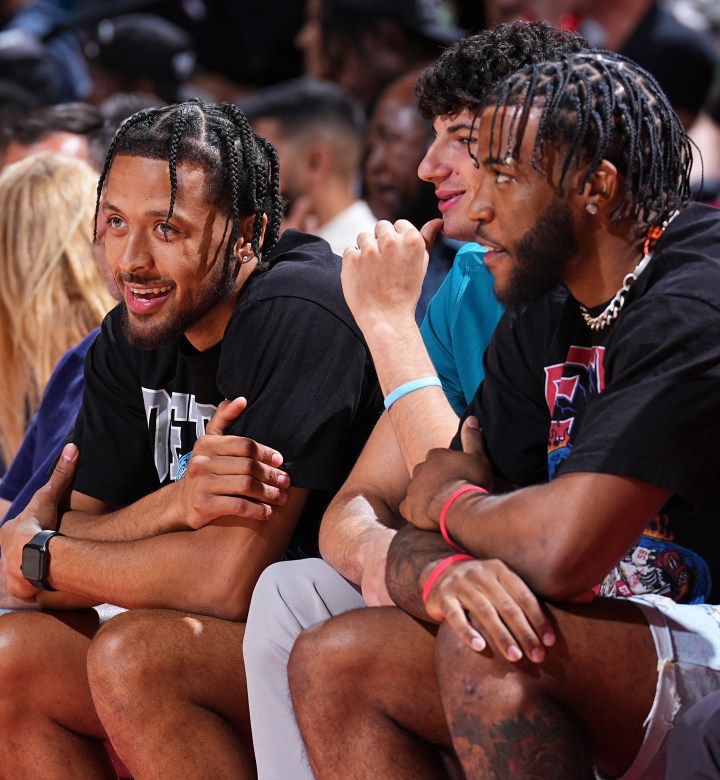 We've seen Cade's drip in person, and believe us when we say the drip is fresh to def. Cade definitely knows how to put an outfit together for sure. 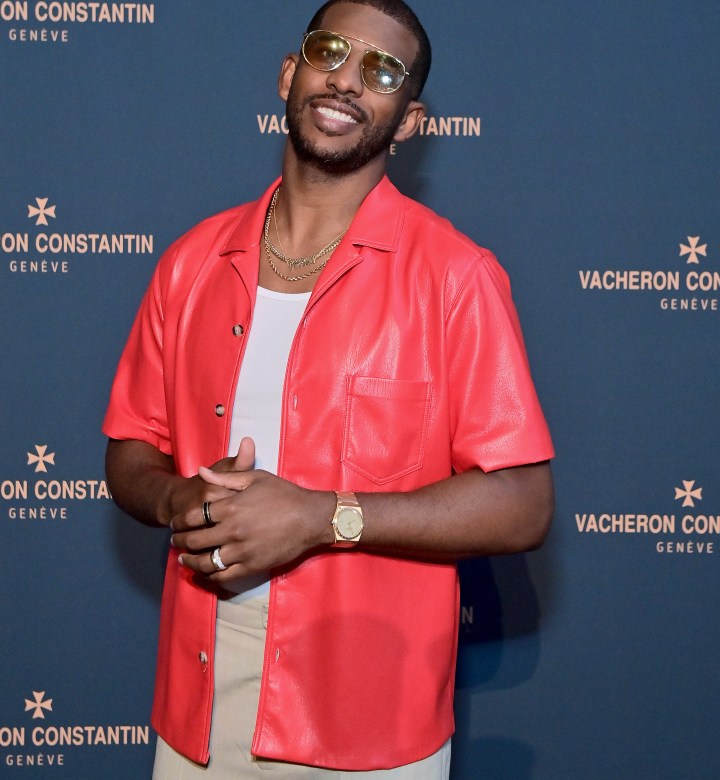 Whether it's an HBCU shirt or a suit, you know Chris Paul is always going to bring the on and off the court fits. 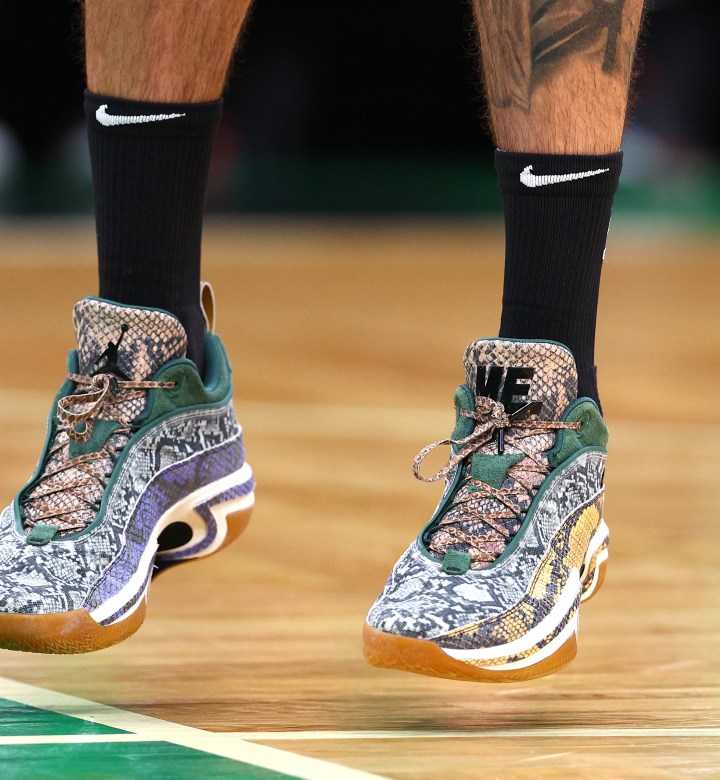 We're choosing a shoe picture because it's just an example of how Jayson Tatum always brings something unique to the style game. We'll describe Tatum's style as laid back with an epic sense of flair. That sounds about right. 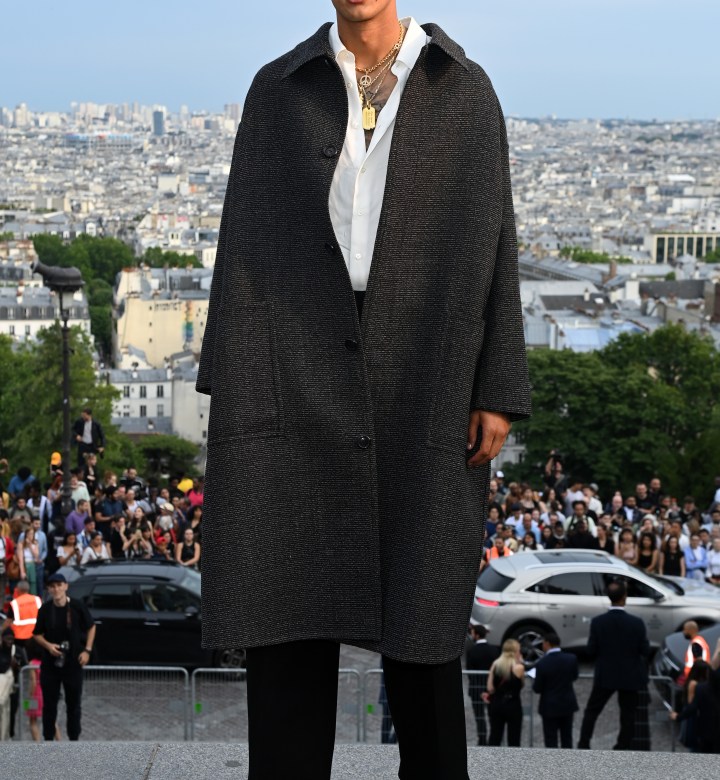 Although Kuz has had his fair share of misses, his commitment to pushing boundaries and always trying out new silhouettes has to put him somewhere on this list. Some of his misses are surely as notorious as his hits, but he's got to get credit for trying. 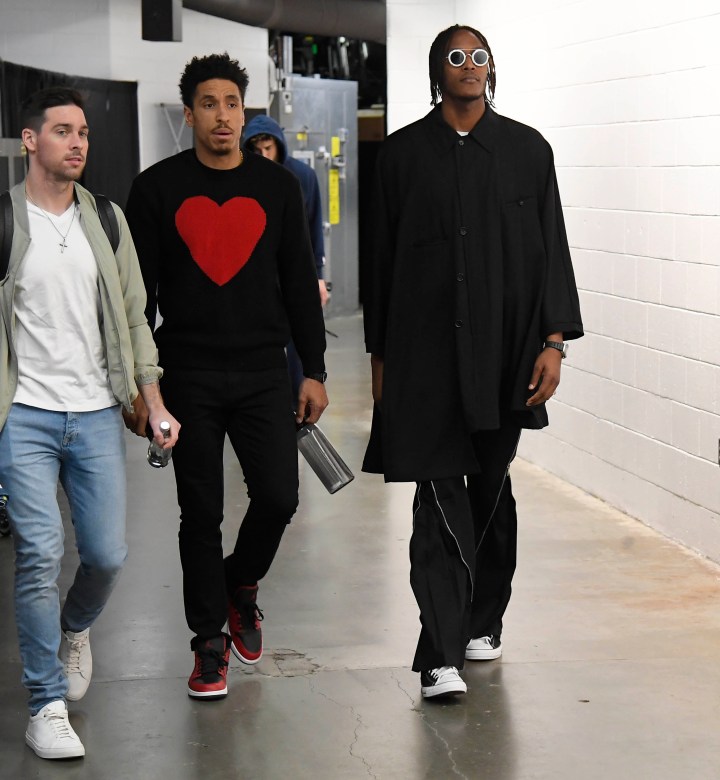 Look at Myles go with his Enter The Matrix fit. This tunnel picture is one of the many examples of Myles Turner bringing the sick fits during the NBA season. Whether it's casual, semi-casual, or a little more on the upscale side, Myles always delivers. 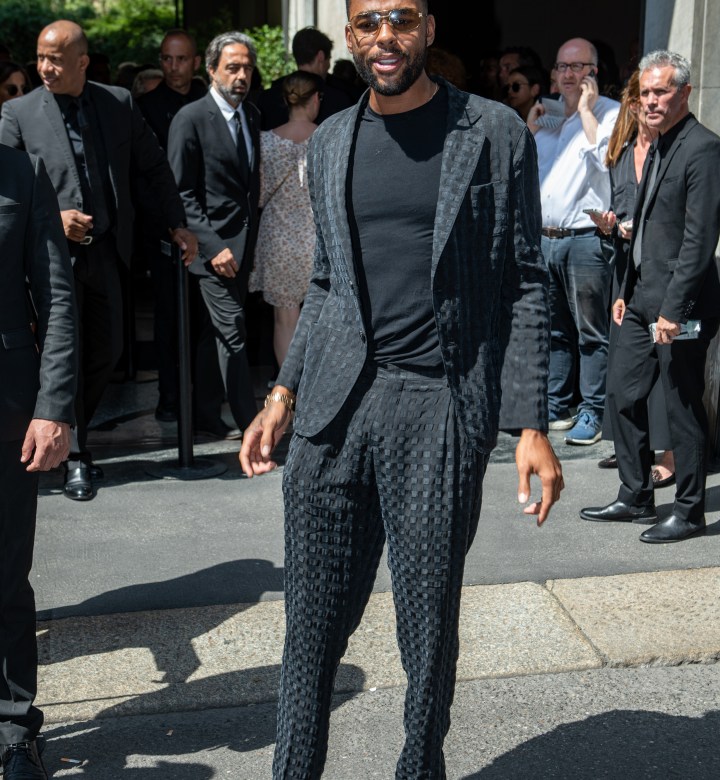 Guess who was at Milan Fashion Week? If you guessed D'angelo Russell you are correct. Once again, these fashion week invites aren't just handed out to anybody. You have to be a "somebody" in the fashion world, and as proven by his many signature fits, D'angelo is definitely a somebody. 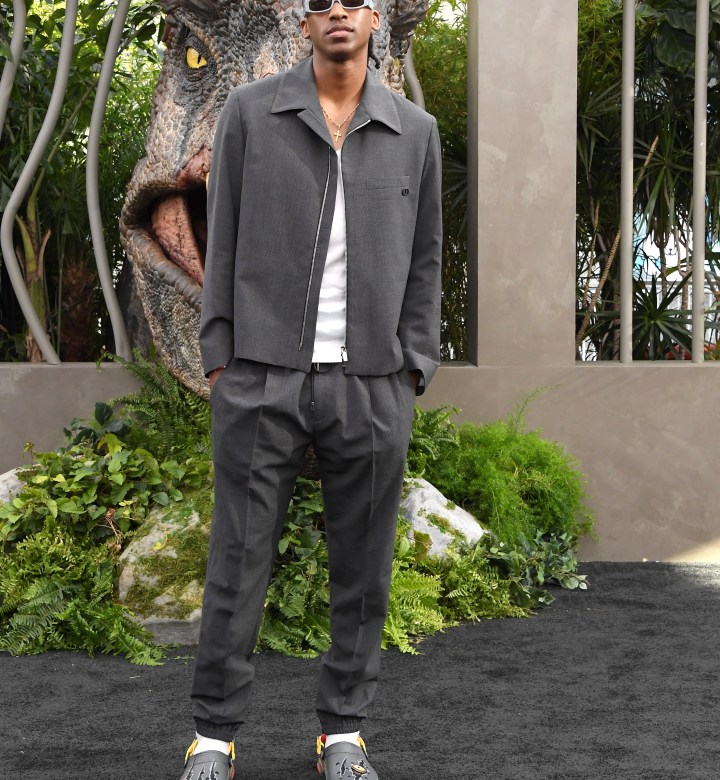 They call him "Red Carpet" Terance. Whether it's a pre-game tunnel outfit, or it's on the red carpet for a popular movie premiere, you known Terance is going to bring his A-game. We also must note that his shoe game is impeccable as well.

To be considered for "the worst," these players can't be the pure hoopers who don't subscribe to the tunnel fit ethos. It wouldn't be fair to include players like Giannis Antetokounmpo, who wear Nike tech fits each and every day to allocate all of their time for focus on the game.

Like with the best, some of these guys certainly have had some decent fits in their careers, but these are the players who produce more misses than hits. 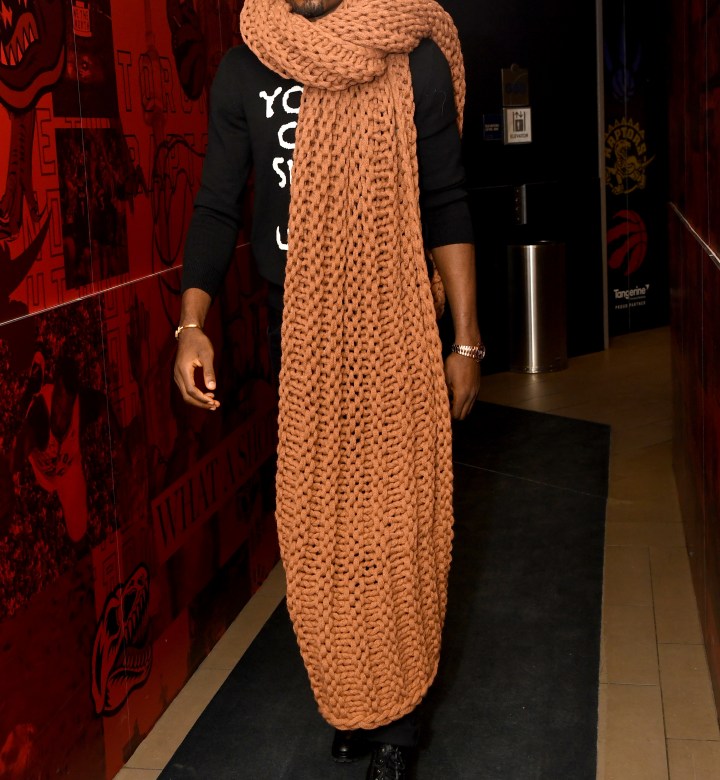 Poor Serge, who let you out the house like this? Serge is a perfect example of a player on "the worst" list who has some good fits up his sleeve, but the bad ones outweigh the good. He falls to prey to a pitfall many larger NBA players succumb to, where a lot of his clothes just don't seem to fit right.

Honestly, this scarf fit is far from his worst, but it was so meme-ified when it happened back in 2020 that we had to include it. 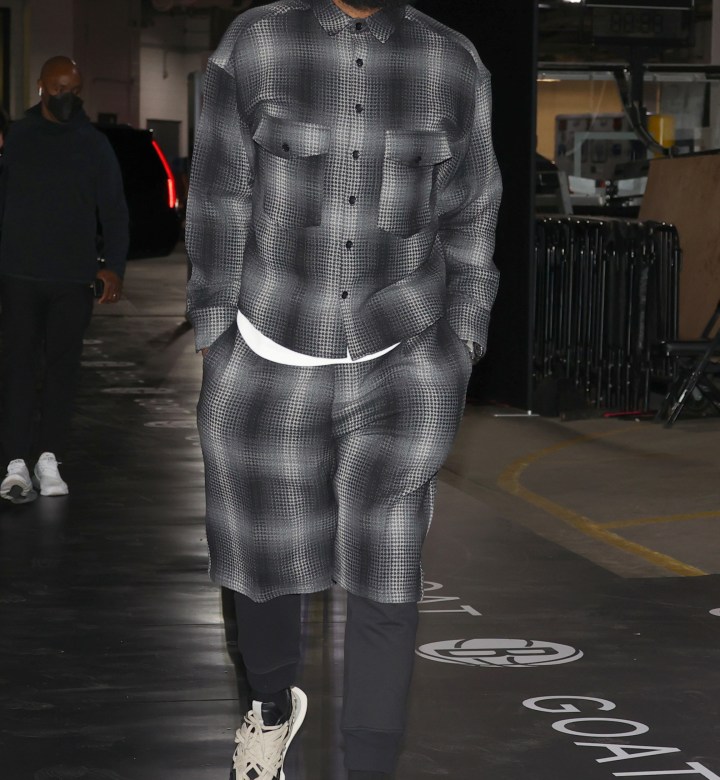 I really hope that this one doesn't need elaborating for our readers. Tights under shorts in a non-athletic setting was already an awful trend in the mid 2010s, but sweatpants? Are you serious? Not to mention the ugly matching patterns he's got on, and another Rick Owens disgrace. People need to understand there is a set and setting for Rick Owens, and this is definitely not it.

When he opts for something more muted, Harden has certainly pulled off a fit or two, but when he tries to up his game it tends to fall flat. 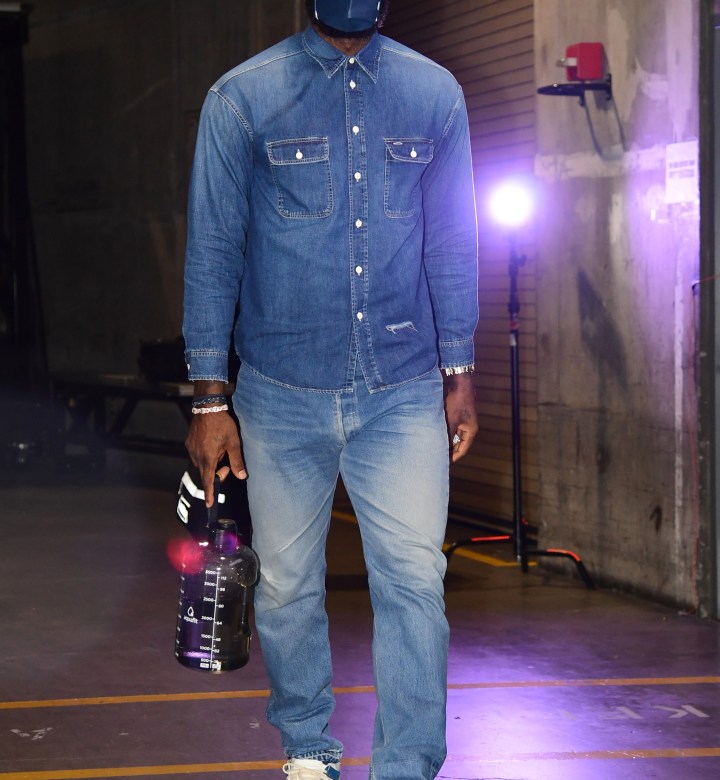 Bron consistently goes for cropped / pin-rolled looks and it never hits. The above fit is a rare instance where the clothes actually fit pretty well, but the vision is just not it. So although Bron doesn't rock particularly terrible fits, his usual fare doesn't fit his frame well, and when he tries to put together something cohesive, it's pretty odd.

For your regular degular 6'9" guy, we'd understand having trouble finding clothes that fit properly, but when you make $40 million+ a year, don't be afraid to throw a few shekels over to a tailor. He does have some solid fits from time to time, but as one of the greatest players of all time, we think he'll live if he takes a little heat for his tunnel fits. 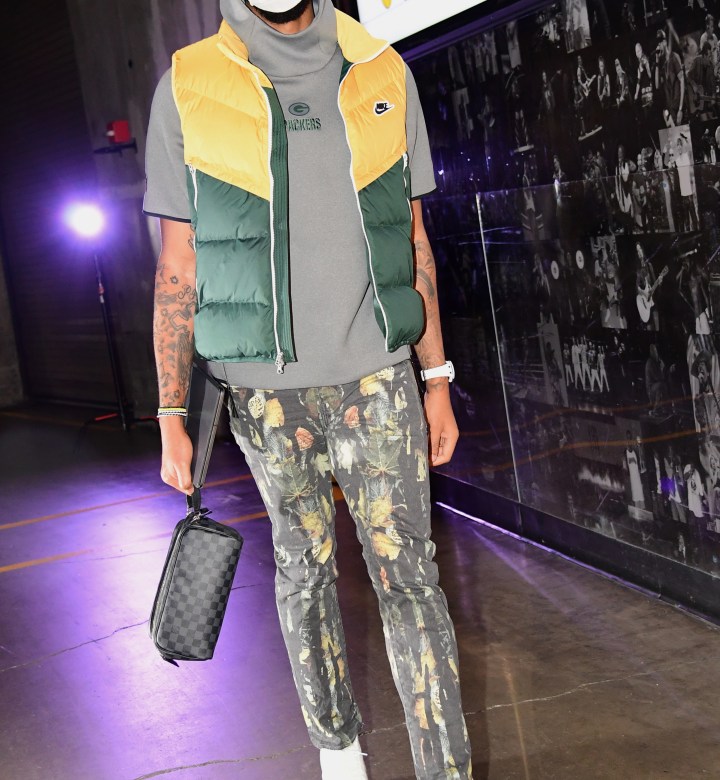 AD—perhaps more than anyone on this list—falls victim to his size. At 6'10" with unbelievably wide shoulders, Davis' commitment to skinny pants doesn't do any favors to his overall silhouette. He ends up having a cartoonishly odd shape, reminiscent of some of anime's big top / little bottom characters—see, Bartholomew Kuma.

Not even wider pants could salvage the above outfit though; it's just a mess. If his goal was to opt for something matching (as signaled by the vest/hoodie combo), then a more coordinated pair of pants would have worked. As is, there's just nothing cohesive about this outfit, and none of the individual pieces bring anything that interesting to the table. 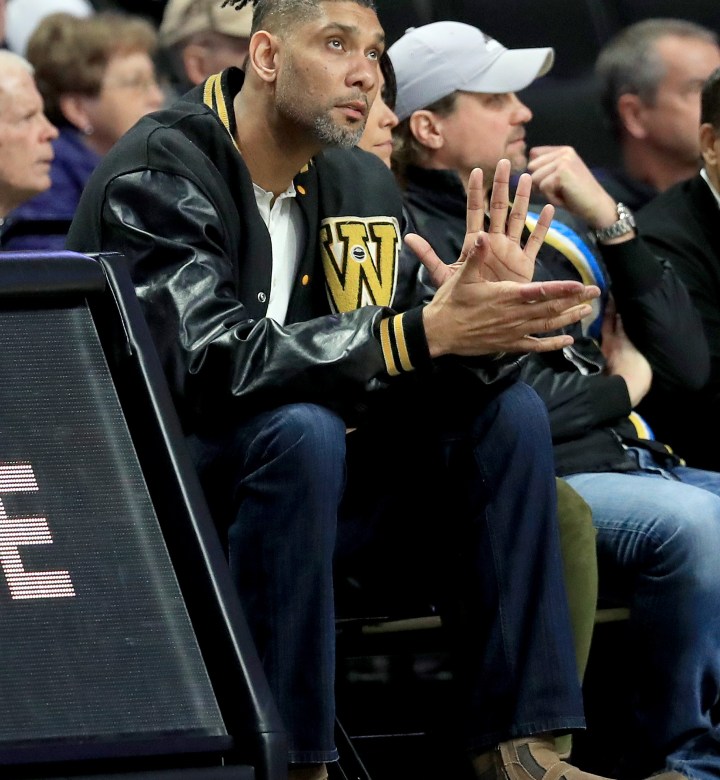 While Timmy's coaching looks are definitely a step up from his playing days, he still could use a little assistance. Tim, you could have paired the varsity jacket with sneakers. Varsity jackets do not go with dress shoes. We can't explain why, but they just don't. 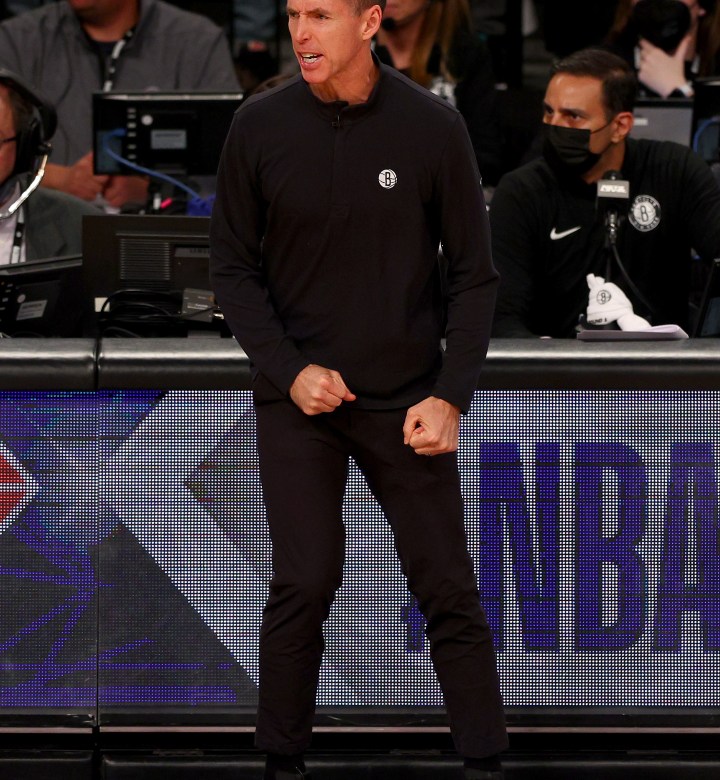 Poor Steve. He has never been able to get it quite right when it comes to fashion. Not as a player, and not now as a coach. Maybe one day Steve, maybe one day.