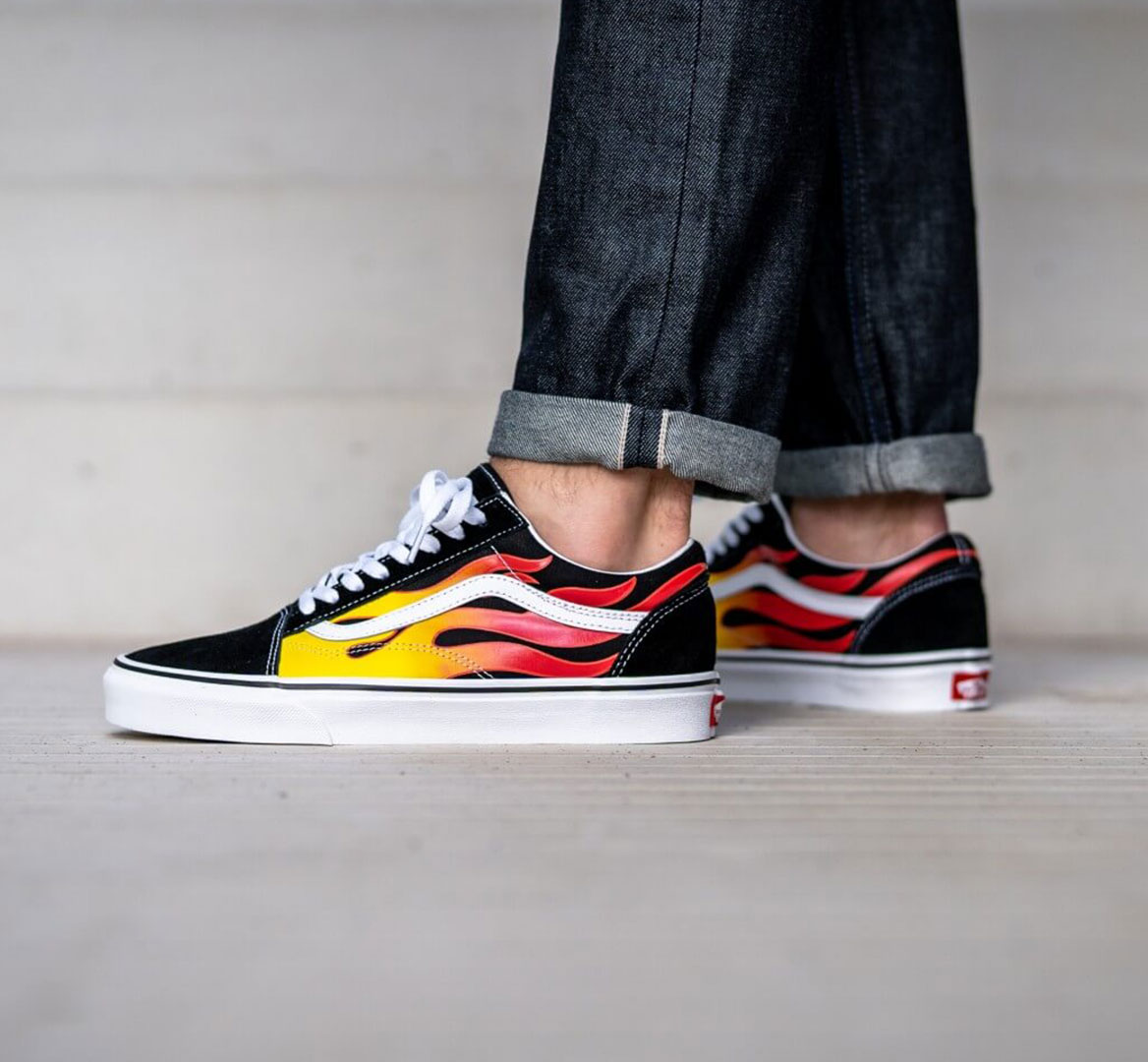 The year is 1966, America is embroiled in Vietnam, Phil Knight and Bill Bowerman founded Nike two years prior in Eugene, Ore. and almost exactly 888 miles down the western coast of the United States, the Van Doren brothers are striking gold, or rubber if you will, as they introduce the world to Vans. Their first day included 12 pairs of shoes, ordered, made, and delivered in the first 24 commercial hours in existence. Their local Anaheim success was an omen of what was to come: a future foretold where the best Vans shoes are some of the best damn skate shoes on the market.

The humble garage setup was just the beginning as the brand, and their iconic rubber waffle outsole, continued to craft new silhouettes, slowly but surely altering the skateboard and lifestyle footwear landscape. The Sk8-Hi, Slip-On Classic, and others all became essential equipment for the uniform of a 70s SoCal teen in the know.

Sooner than later the whole country, not to mention the world, knew the phrase “Off The Wall”. The brand is a powerhouse. Executing simple black/white colorways on its top models, it collaborated with other skate staples like Thrasher magazine, Supreme, and others who perfectly paralleled the unbuyable “cool” that the brand continues to deliver on a steady basis.

While cool factor is incalculable, we did our best to take a look at 15 of the best Vans shoes, from the perfect wide soled skate silhouette to one-of-a-kind collabs, our list does its best to draw some conclusions about a brand that was never worried about being ranked. 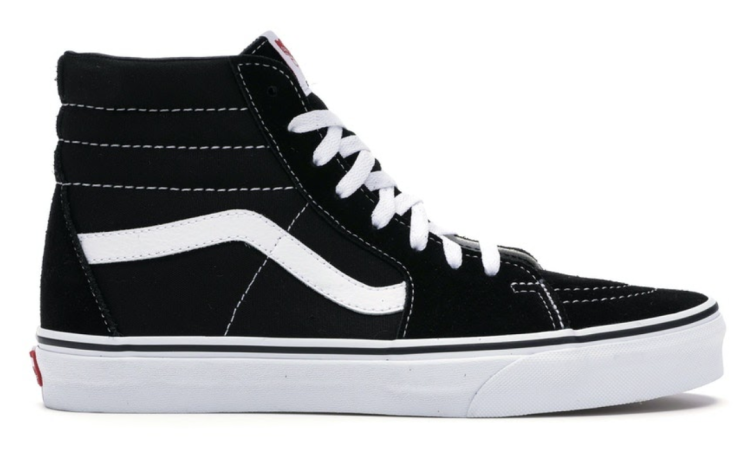 All hail the Sk8-Hi. Seen in the classic and simple black/white colorway it is the Air Jordan 1 of skateboarding. Coming on to the scene in 1978 it set a precedent for skate performance. Tall and bold, the white rubber midsole pops off a textile and suede black upper. It’s taken on numerous iterations and versions but still remains a dominant force in the skate performance world all while enjoying an equally prominent place in the world of casual/lifestyle wear.

The unofficial sneaker of southern California, the Classic Slip-On says it all right there in the name. Classic as classic gets, the Slip-On was not only the go-to for early skating but rests easily as one of the most sought after and loved casual sneakers of all time. It’s relaxed slip-on style is the perfect encapsulation of skate culture and the relaxed lifestyle of California.

For all of their high profile collabs and bold colorways, the thing that makes Vans great is their simplicity. Their ethos stems from their early aughts in that Anaheim garage and it seems that no matter what, the brand is still sticking to that. Black/white never looked so sharp, yet so simple on the Vans Old Skool. One of the brand’s highest-grossing models, the Old Skool is unmistakable with its bright, white jazz stripe logo slicing down the side of the silhouette.

Whatever your thoughts may be on American designer Jerry Lorenzo or his LA-based streetwear company Fear of God, his collaboration with Vans in 2017 was an undeniable success (seriously check out those resale prices). The high-end streetwear brand put their simplified and overbranded spin on a number of sneakers including the Era 95 DX resulting in a project whose price tag hit some pretty unprecedented numbers for the simple canvas sneaker. Even the Chainsmokers got their hands on some pairs, unbeknownst to them they treated them like any old Vans and beat them into the ground.  However heartbreaking that may be, it did make for a nice anecdote on Complex’s Sneaker Shopping with Joe La Puma.

Of Supreme’s multiple collabs with Vans, their 2013 one with White Castle is not only a personal favorite but kind of a sleeper. They put their spin not only the Authentic but a Classic Slip-On and Sk8-Hi each decked out with their own version of the burger chain’s bright and bold blue and white logo. The seemingly arbitrary joint project offered fans of the brand no answers– the randomness of the release was enough to keep demand for the pairs high and sticking true to their Quickstrike business practices, still very hard to find to this day.  ​

Like many advocates for the brand, among us is Tyler, The Creator. A picturesque Cali teen who grew up loving the brand got his full-circle moment when Vans matched up with his creative outlet, Golf Wang in 2014. His super out-there style was a perfect match for the brand, the results; three boldly colored Old Skool Pros. They all came decked out with cool Golf Wang heel branding and cotton candy pink midsoles. The ones with the forest green uppers are my personal faves. 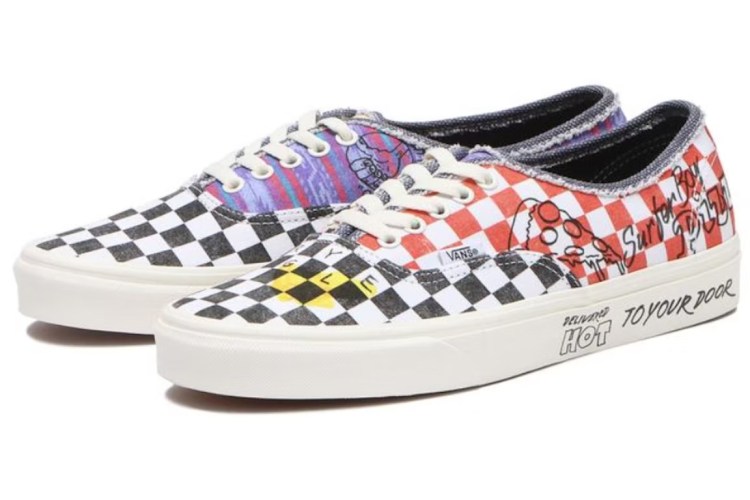 It's no secret that it's a collabs world out there right now, and Stranger Things manages to keep itself pretty firmly in the zeitgeist at all times. These kicks, which invoke the colorful nostalgia of the 80s Netflix show, released in August of this year and are a pretty fun rendition for those who aren't afraid of a bit of flash. 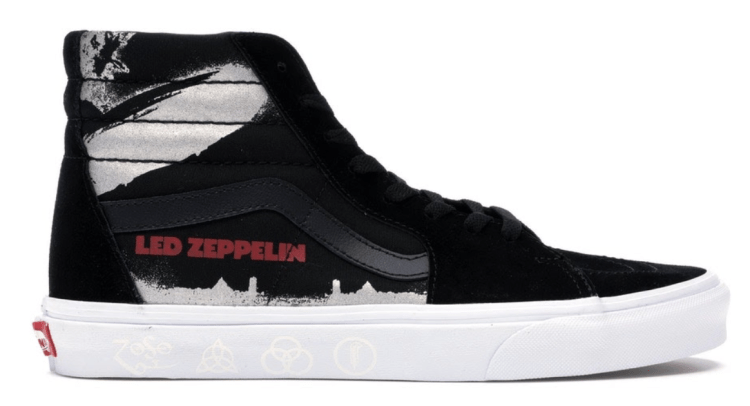 There’s hardly a rock band worth their salt that doesn’t count Led Zeppelin, among others, as a major influence. The band celebrated their 50th anniversary in 2019, and with it, a two sneaker release with Vans. The Sk8-Hi is a personal favorite but the brand also worked on an Era silhouette to give the collaboration a hi and low option for those looking to rock or shred.

Of all the music-centric sneaker collabs that exist, there’s a special place for this 2018 collab with A Tribe Called Quest. The rap group has been steadily putting out genre-defining music and with that a special multi sneaker collab in 2018. The best of which, was the Authentic. The simple low cut sneaker came decked out in white and black but this time drenched with words and phrasing from the group in an all-over pattern. Want to see more music-themed kicks? Look no further.

With a hard rubber outsole for gripping a skateboard, Vans was never the most comfortable sneaker brand but that all changed when Vans introduced the world to a more comfortable version of their iconic skate sneakers with Comfycush™. The new tech brought updates to the Era and other silhouettes. The brand even bragged that their material was as comfortable as running sneakers and although that’s a tall order to fill, the general consensus was yes, Vans are more comfortable now. The new product launch came with some new colorways like “Marshmallow” a reverse twist on the classic black/white template.

The Vans Old Skool “Flame” is a simple sneaker with a cool colorway that transports you back to the days of sneaker shopping when the only thing that mattered was if a sneaker had flames or not. Even though we’ve grown up a little bit (some of us anyway) there’s still nothing wrong with going gaga over a good sneaker with flames. If Supreme and Nike can try and make flames cool again then so can Vans.

Another great example of Vans’ seemingly flawless execution is the Half Cab Pro - for skaters by skaters. The sneaker looks best in a simple black/white colorway and came into existence in just about the most punk rock way possible. The legend centers around Steve Caballero and if you don’t know about his high top sneaker then get this - he noticed young skaters chopping off the top of his signature skate sneaks and using duct tape and stickers to close up the wounds.

This makeshift version was the first iteration of the silhouette and Caballero even tried it himself to see what the hype was about. It didn’t take too long before he called up Vans with an order to manufacture the Half Cab Pro. Meeting the demand for this mid-height sneaker, the factory version was born, giving skaters and newfound street skaters a tool for performance. Watch the tale unfold for yourself here.

Although the Pros are expensive and hard to find these days, the traditional Half Cab is more accessible, but does sacrifice a bit of actual skate performance.

The Vans Lampin is one of their lesser-known silhouettes, its upper has an arch overlay but that unusual detail made it the perfectly unique model for billion-dollar streetwear brand Supreme to use as a template for their funky and bold aesthetics. So ugly it’s perfect – the mashup of embossed croc and corduroy colored mustard is just about as “Supreme” as it gets and for true fans of either brand, this 2018 collaboration was one of several examples of the power of each wield. Together, they’re an unstoppable force of skating.

Coke white. “Damn Daniel.” Whatever reference you might know them by the Vans Authentic “True White” is a bright, shining example of what makes Vans so great. Their emphasis focuses on the simple performance of their trademark rubber outsole. This simple plain colorway is a must-have for anyone, whether you’re looking to shred a drained pool or looking for something to pair with a casual fit. 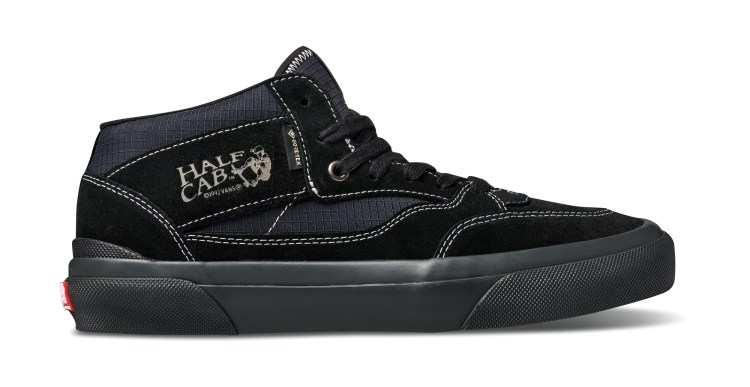 One of the newest additions to the Vans lineup is the Skate Half Cab ‘92 GTX shoes, which commemorate 30 years of the Half Cab, which started in 1992. A winterized take on one of the most influential skate shoes of all time, the Skate Half Cab features  Gore-Tex construction, molded heel counters, locked-in tongue straps, DURACAP underlays and plenty more in what is going to be the first of plenty of epic drops and collaborations coming in the near future. These released on November 23rd. 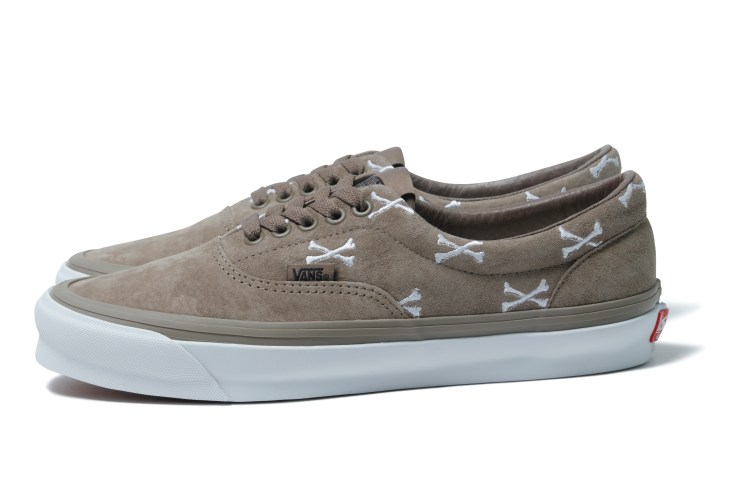 It seems like WTAPS has been everywhere over these past couple of weeks. Their latest collaboration is drop two with Vault by Vans after a highly successful first launch. The second drop takes inspiration from the cold weather season and the snowboarding heritage shared by both brands, featuring monotone, earthy hues, V3 UltraCush with The North Face Flashdry liner, V3 PopCush footbed to elevate comfort, V3 Waffle Superenduro outsole with all-trac cold weather rubber compound for performance in and out of your bindings, and a V3 harness for ankle support. Really cool shoe. 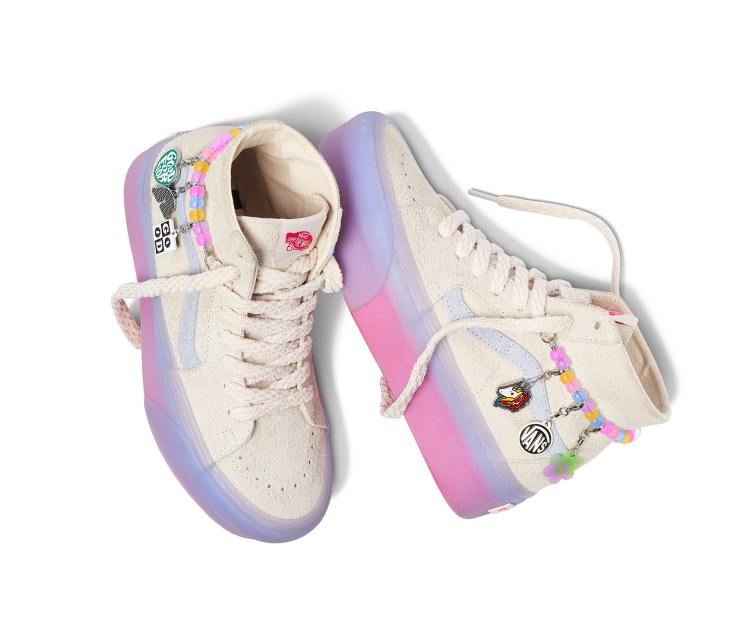 Another cool collaboration from Vans is their partnership with  international fashion personality Irene Kim, for a new collection that celebrates individuality, creativity, and positivity. The head-to-toe collection incorporates Vans classic footwear in the form of  the UA Authentic 44 DX refreshed for the Holiday 2022 season in a luxe velvet upper and finished with a tie-dye print reminiscent of a positive aura reading, and the Sk8-Hi Tapered Stackform features a hairy suede upper and includes a removable ankle chain decorated with custom IRENEISGOOD charms. 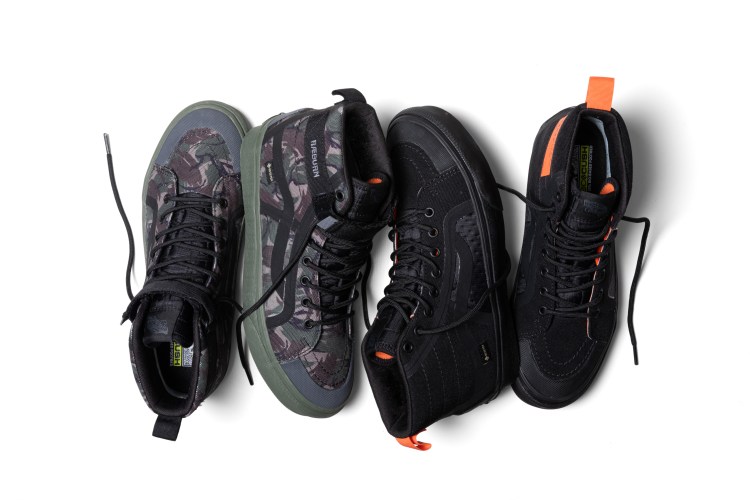 Vans teamed up with British designer Christopher Raeburn for their first ever collaboration, which is a  utilitarian-inspired head-to-toe collection of footwear, apparel and accessories. Available from November 18, VANS x RÆBURN draws on the design studio’s responsible design ethos for a capsule of four footwear styles which includes two different colorways of the VANS Classics, the Sk8-Hi and Old Skool. Pretty sick. 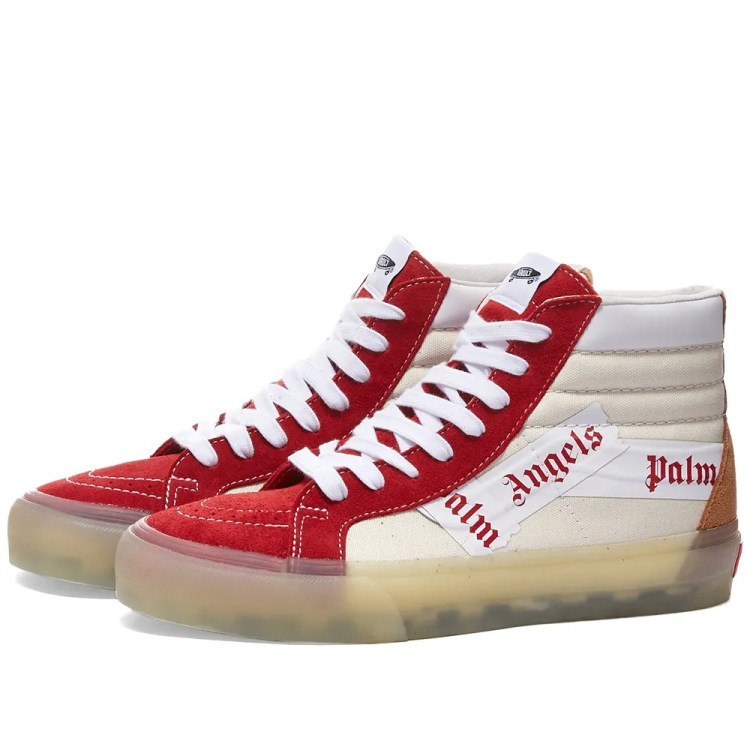 Releasing in September of this year, the Vans Vault collab with Palm Angels is a vibrant and eye-catching take on one of the brand's most iconic silhouettes. “Palm Angels started with a photography book and Vans was already there. I took a picture of a guy skating in Venice beach, wearing the most vintage Vans Sk8-Hi I had ever seen and since then, the idea of Palm Angels collaborating with Vans has always been in my mind. It’s now finally reality. With this collection I wanted to recreate exactly that same image: few models with a vintage feeling and a contemporary take“, Francesco Ragazzi, founder and Creative Director of Palm Angels, said about the collab.

While the initial release took place on September 27th, you can still find the kicks at select retailers, including the UK's End Clothing.