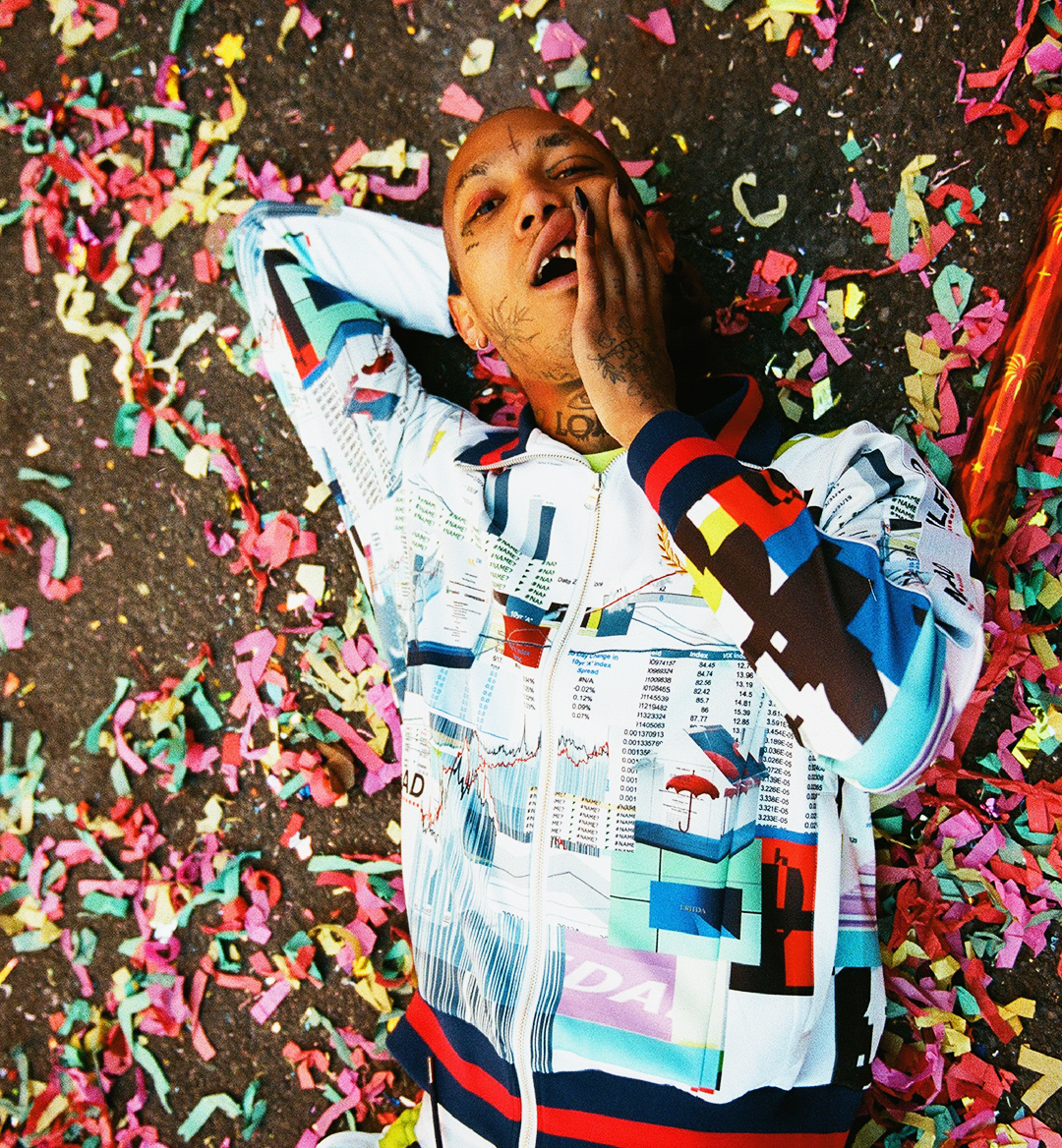 In a time where high-end luxury brands are co-opting streetwear, Milfdad isn’t afraid to embrace its streetwear origins. Since the first collection dropped two years ago, Milfdad has gained the attention of fashion figures like Yung Gravy, NLE Choppa, YNW Melly, Smokepurpp, Lil Tracy and more. All your favorite artists and celebrities can be found in Milfdad’s colorful tracksuits, sweatshirts and durags, as well as rocking the shoulder bag lined with stock prices and symbols.

The brand was founded by Ben Fine, who previously worked as a financial analyst, and Justin Butler, a multifaceted artist who studied English and film. The pair conceived the name Milfdad while on an acid trip in their hometown in New Jersey after Fine had quit his finance job to pursue a creative venture. After initially reselling streetwear pieces online, Fine translated his eye for identifying trending pieces into beginning his brand. In just under two years since Milfdad launched, the brand has made waves in New York City and is now being sold in boutique stores abroad. Hip-hop and rap artists have uniquely identified with the entrepreneurial spirit of the brand and Milfdad has established itself among artists and celebrities within the entertainment space. The founders aren’t afraid to fail or take chances to make an impact on the fashion industry. So far, their gamble is paying off.

What was your inspiration for Milfdad?

Ben Fine: Basically, the brand started as a username. I was doing streetwear resale on websites like Grailed and Depop, and Milfdad was just my username. Then, we created a logo from the Notes app on the iPhone. It was just a screenshot. When I became a pretty major reseller in the streetwear universe—since that was my main source of income—I started mocking up products with the Milfdad logo.

Did you see immediate success at first?

Fine: People always liked the name. Depop posted on Twitter saying that Milfdad was the best new username, and that was before the brand even began. The thing about it as a clothing brand is that the bigger it gets, the funnier it is. It’s kind of a commentary on the way people brand themselves by wearing branded products and build an identity that way. That kind of consumerism has always made me uncomfortable, so Milfdad is sort of a rejection of that dynamic while still, of course, being a part of it. A lot of the brand names out there are somewhat silly. The ones meant to be the most serious are usually the dumbest. And the best brands are usually just named after a person. I sometimes tell people to just pretend Milfdad is my last name and that’s the reason why we call it that.

Fine: It’s been less than two years since our first release in 2017. In the first year, it took a while to get the clothing made. The process involved us trying to figure out how to do apparel production on our own, which took some time. We had our ups and downs there, and anyone making clothes will tell you that it’s kind of rough. But we didn't have a problem getting the brand out there. Our main marketing strategy was to get our clothes to celebrities because we didn’t have a budget for any traditional advertising. So, we got lucky that in the first week or two. After the first tracksuit release, Fatboy SSE, Famous Dex and a bunch of other people were wearing it.

Did that translate into sales for Milfdad?

Fine: Yeah, it led to a lot of sales. Enough for us to re-invest in the next collection of Milfdad. And through this process, you get to see who holds weight with the consumers. Now I’ve had to become somewhat of an expert at wading through all the fake followers and engagement on Instagram, and I’m now able to tell who actually has sway. I'm not going to name names on who didn’t carry weight when you would expect them to, but certain people look popular on Instagram, but at the end of the day, no one really cares. Then, other people who might have fewer followers actually have a cult following. Selecting influencers depends on the product you’re selling. If you are selling clothes, then you want to market with someone who is respected for their fashion sense. If a person isn’t considered a fashion inspiration, then it might not translate.

In the past two years, what designs and styles gained the most traction?

Fine: Honestly, I know this game pretty well, just from all the selling and reselling, and weirdly enough, at the end of the day, a lot of people just want a T-shirt or hoodie in a regular color with the brand name on it. So it’s just a game about branding and having high brand awareness. The best product for us has been a black hoodie that says “Milfdad.” That's been the one that's been the hardest to keep in stock. You can make a bunch of awesome pieces, but the core motifs and the core products are always going to be the majority of what the customers buy. The flashy stuff that you see celebrities wearing brings attention to the brand, but at the end of the day, the average consumer is going to see that, want a piece of the brand and purchase something basic that fits with their current wardrobe. Our tracksuits have sold well and been profitable— that’s certainly been what we’re most known for—but the black logo hoodie is something that everyone can pull off.

In your two years as an entrepreneur in the streetwear industry, what have been the biggest changes you noticed?

Fine: I don’t think that much has changed, just certain brands have been going up, others going down and certain people have gained influence. A lot of this stuff is dictated by a few individuals: Kanye West, Kim Kardashian and all the people affiliated with them like Travis Scott, Virgil Abloh and others. That crew collectively influences consumer taste pretty heavily. I think they have even gained strength in the past two years.

Is New York City still the city of streetwear, dictating culture and fashion?

Fine: Yeah, and that’s never going to change. I think the brand wouldn't have worked anywhere else. We’re one of the few brands you'll find that was founded by people outside the fashion industry. My co-founder Justin and I are both from New Jersey, and I went to the University of Michigan to study finance before becoming an investment banking analyst. The lifestyle though wasn’t glamorous. It’s not like what you see in a movie—it’s far nerdier. That year, I happened to buy bitcoin and that became seed money for this Milfdad company. The investment banking job would have been a safe route to being wealthy and working 70 hours a week, which is bad but not terrible. After my first year, I had money and could imagine becoming a millionaire eventually through that path, but I was too miserable and it wasn’t worth my time. I could figure out a way to make more money without the job. It taught me to value my free time.

That year, I happened to buy Bitcoin and that became seed money for this Milfdad company.

What's going on with Milfdad today?

Fine: We have a Japanese distributor now and three stores have wholesale bought Milfdad in Japan. It's awesome because it's hard to break into the boutique game, and we’ve been learning how to organize. It also takes a lot of resources to be on the fashion calendar since a lot of stores like to buy their clothes ahead of time. Being in legitimate stores in Japan makes a huge difference for the brand for other potential buyers. We’re now in a store called Unfollow and they stock top-tier designer brands like Margiela and Yohji Yamamoto, so that’s a great look for us. It might take a specific type of brave person to wear Milfdad in America, but overseas, it’s just dope clothing. The people abroad know what Milfdad means but it's not that serious. The Japanese are way ahead in style because they don’t take themselves too seriously.

Fine: They want to get involved, but we’ve avoided it so far. I think it’s kind of going to be difficult to be taken seriously if all the visuals are just MILFs running around, or if we plaster the word MILF all over the clothing. So, even though the brand is called Milfdad, we haven’t made any other reference to MILFs thus far. We’re trying to get into those selective boutiques and magazines at this stage. Those types of places are very picky about what they endorse, and I don’t want my brand to be a bad reflection on them.

We are gaining respectability at this point and that’s the goal, but I do have some MILFs lined up for shoots if we do decide to go in that direction. If we bring them out, I’d want it to be over the top and extreme, not like a regular photoshoot.