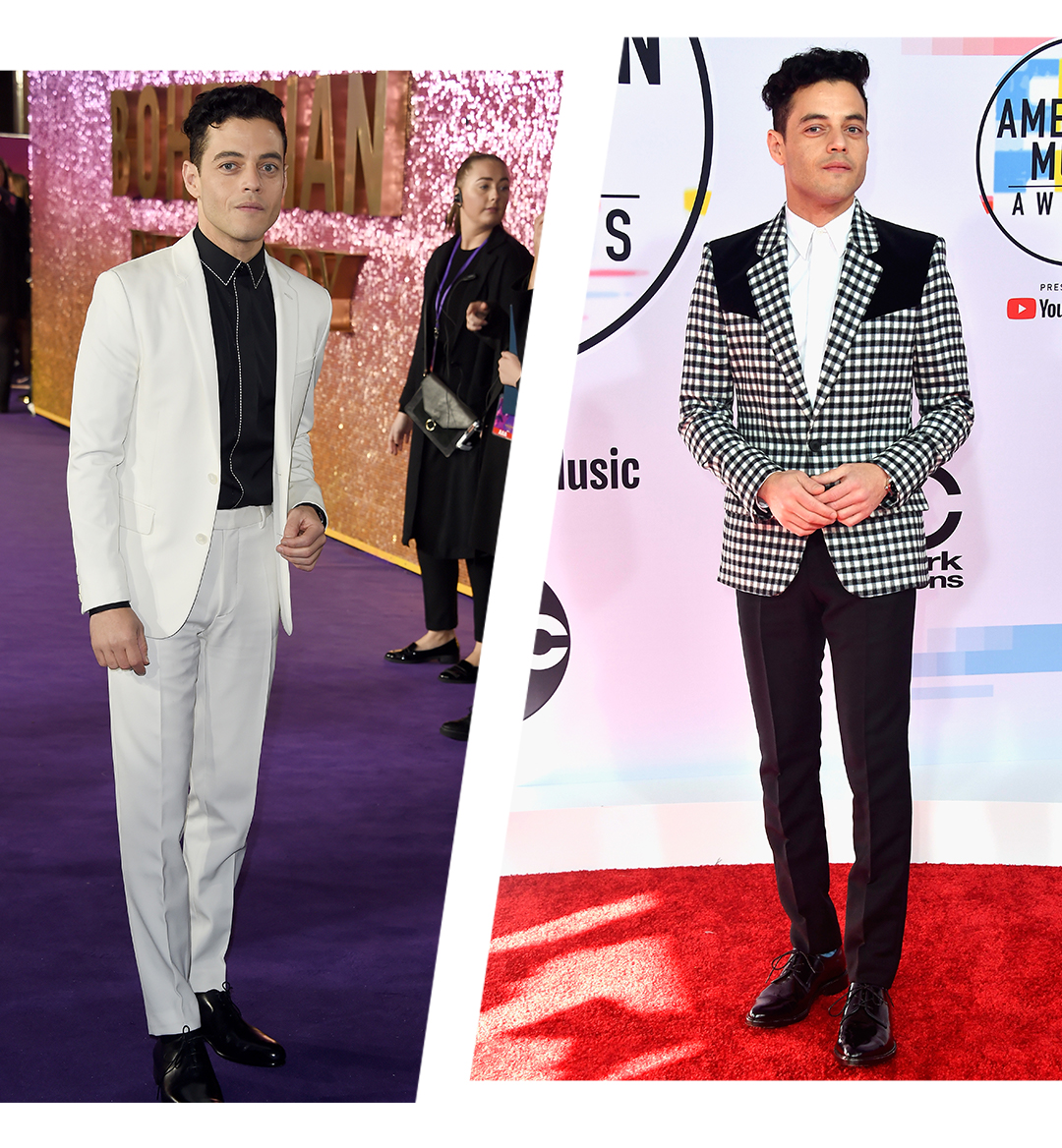 Since 2017, and heightened by his recent Bohemian Rhapsody acclaim and attention, actor Rami Malek has emerged as a style leader, quietly presenting outfits that whisper notes of dapper comfort. Instead of creating scroll-stopping looks like actor and red carpet killer Ezra Miller or owning street style like Puerto Rican singer Bad Bunny, he’s wearing outfits a woman would want her boyfriend to wear when taking him home to meet Mom. In theory, Malek might be the poster boy for uniform dressing, distilling his style to a dependable color palette and silhouette.

In fashion, there is a place for both the absurd and the comfortable. Malek is straddling both worlds while being polished and safe. He has established a uniform for himself that consists of monochromatic suits, a mostly black-and-white palette and interesting details like exposed stitching, funky collars and suits in unexpected colors (e.g., head-to-toe red) to keep things spicy. On every red carpet during his Rhapsody press cycle, Malek has quietly presented polished looks time and time again. Almost like a schoolboy uniform that he pulls out of his closet every morning to abide by a set of rules, it’s safe but effective. 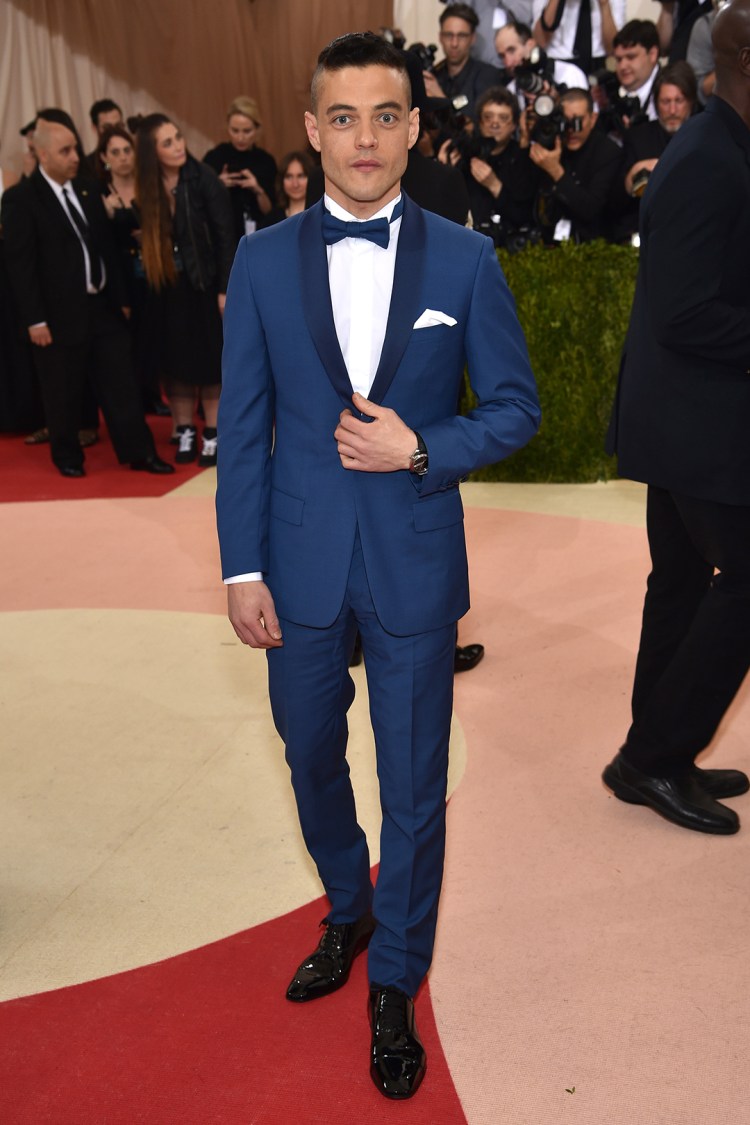 How comfy does Rami look? ?

Would we wear it? Potentially.

As the worst of the best, this look is still strong. Malek must be comfy because he isn’t making any major style moves for the night. He’s owning a well-tailored skinny suit, and the navy feels fresh for a gala that’s a sea of black suits. Nothing to write home about, but still nice. Would wear to a wedding, but, like, a distant second cousin twice removed’s friend’s wedding. 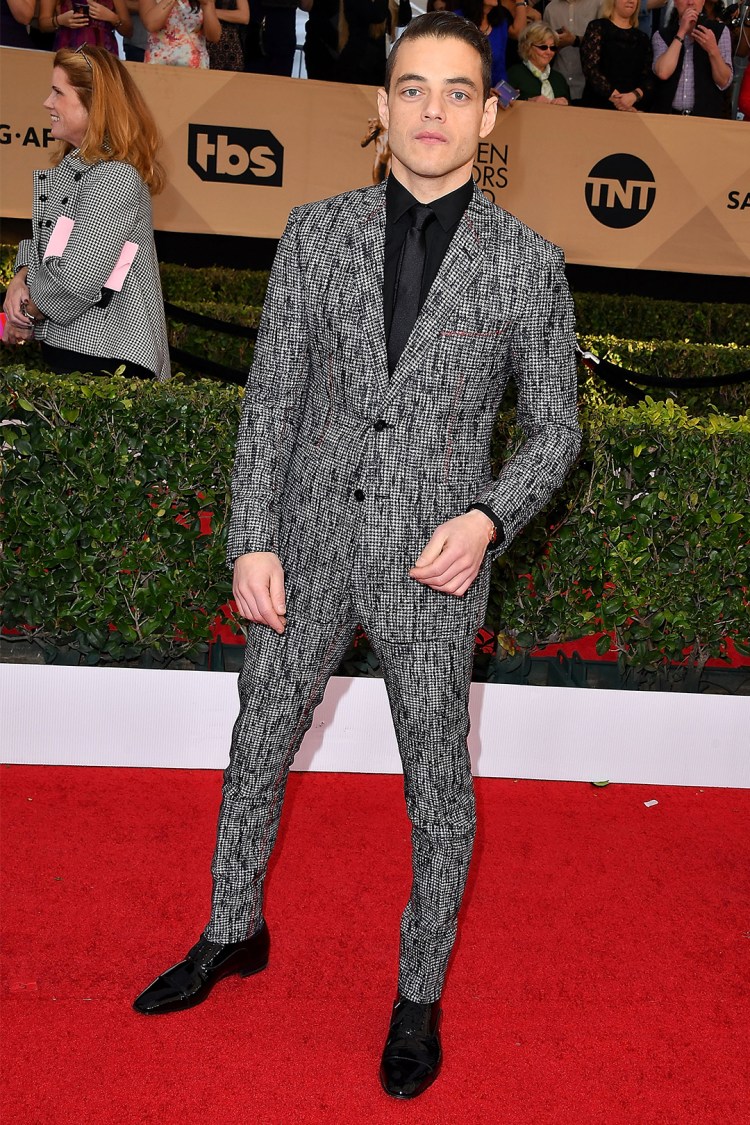 How comfy does Rami look?  ?

Would we wear it?: Maybe? Probably not.

Here we have the counterpoint to the solid navy moment: a head-to-toe tweed suit with slicked hair, a shiny tie and shiny shoes. Malek is definitely not comfy. He’s trying too hard. It’s giving us a headache. Would be hard to find an occasion to wear this look. 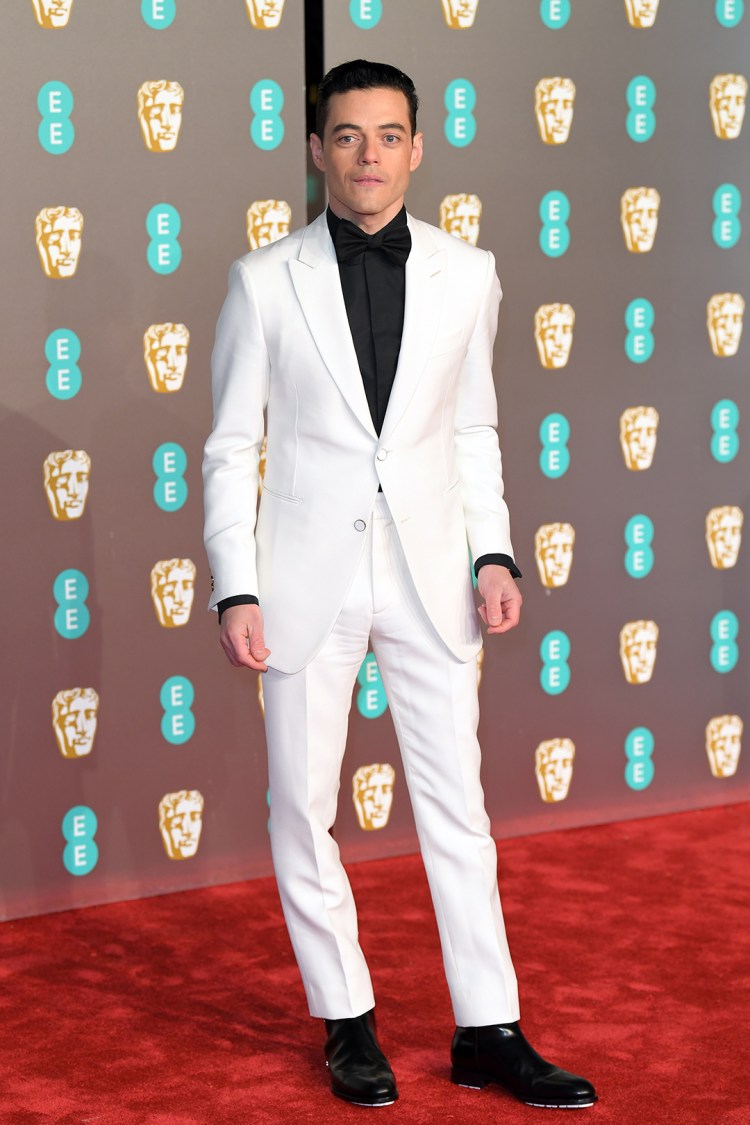 In a bow tie, Malek is not comfortable. You can see it in his pursed lips. We have to give him props for upgrading standard dress shoes to shiny dress boots. We probably won’t be pulling this look to wear anytime soon. 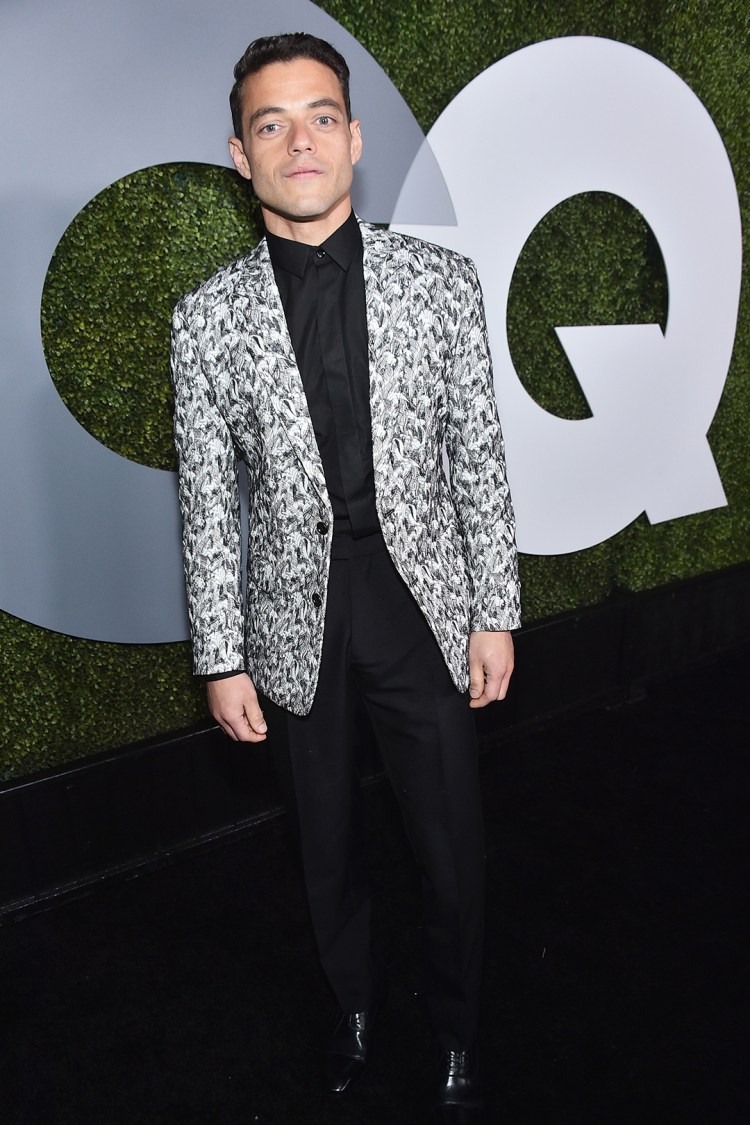 10. Graphic Blazer with No Tie

You guys, Malek is mad comfy. He’s not wearing a tie. He’s in all black. And he is almostsmiling in an awesome statement blazer that packs a punch. Steal this look for your next dinner party. Intricate blazers for the win. 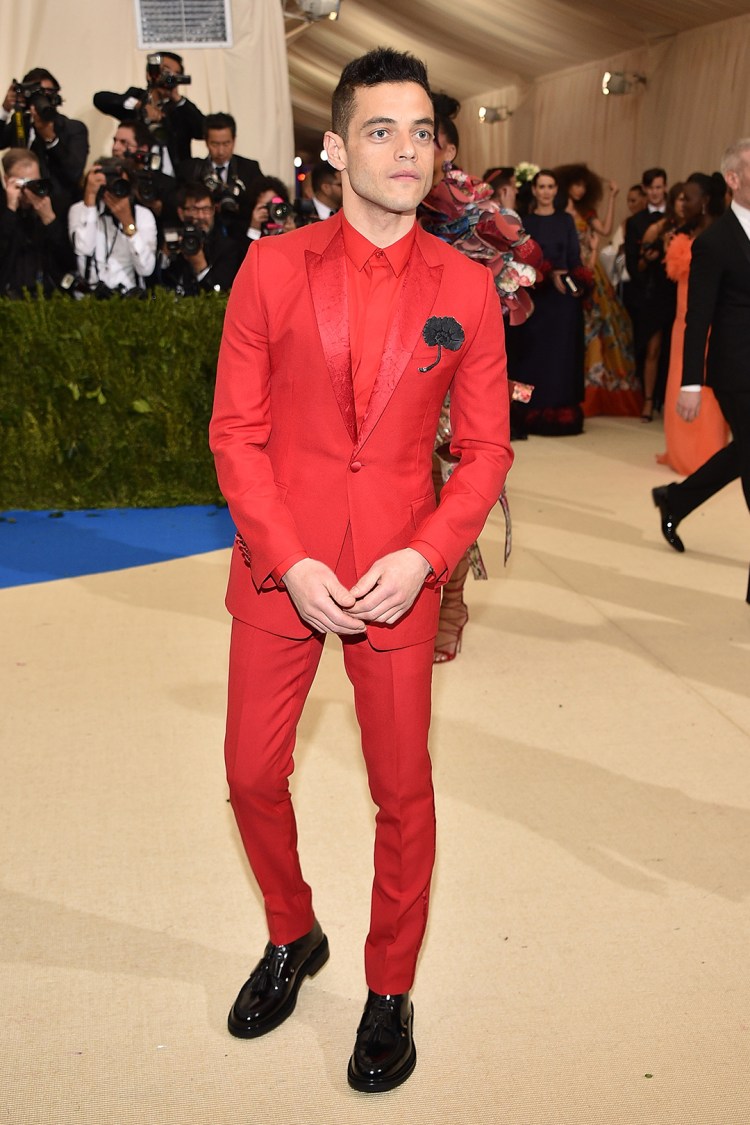 How comfy does Rami look? ?

OK, we know it’s the Met Gala, but our hatchling chick Malek appears to be very sad to be wearing an embroidered flower on his pocket. The monochrome dressing serves him well again here, and the red color is perfection, hence the high dap-o-meter score. Four out of five on the dapper side, one out of five on the comfy side. (Oh, and where would a normal person wear this?) 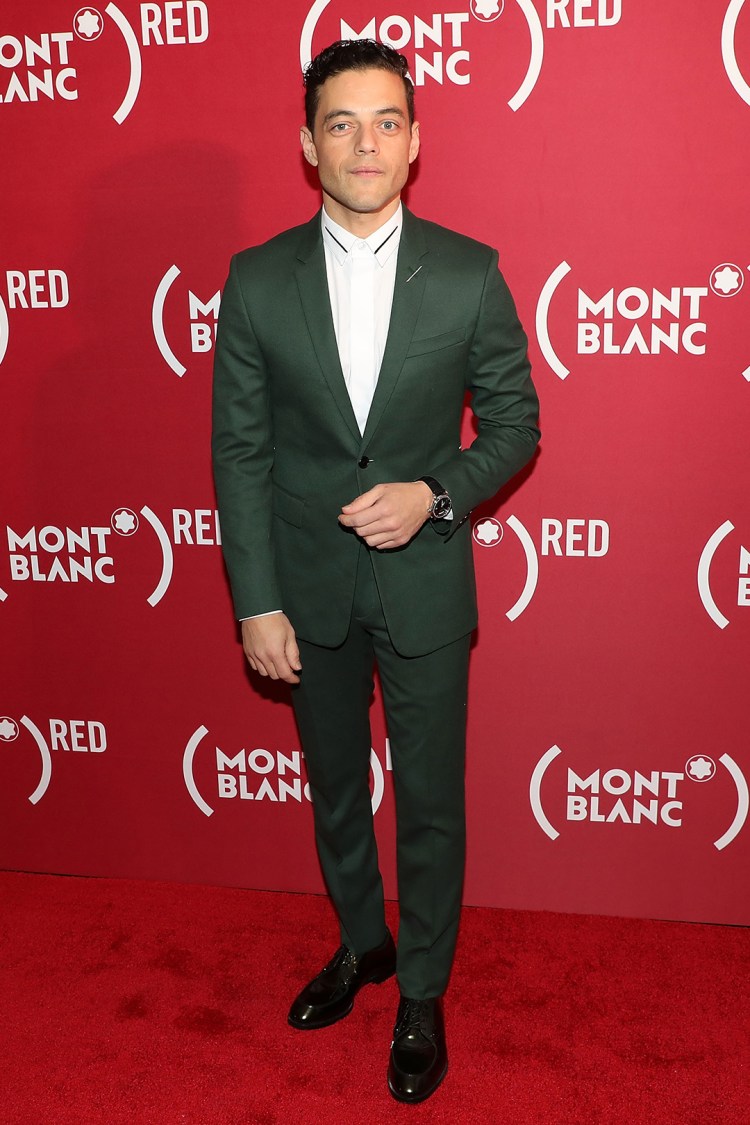 Would we wear it?: Yeah, most likely.

While this Dior hunter green suit is good, the black detail on the collar of his white shirt is even better. It’s stealing the show. This outfit is Malek’s uniform dressing at work. Replicate at will. 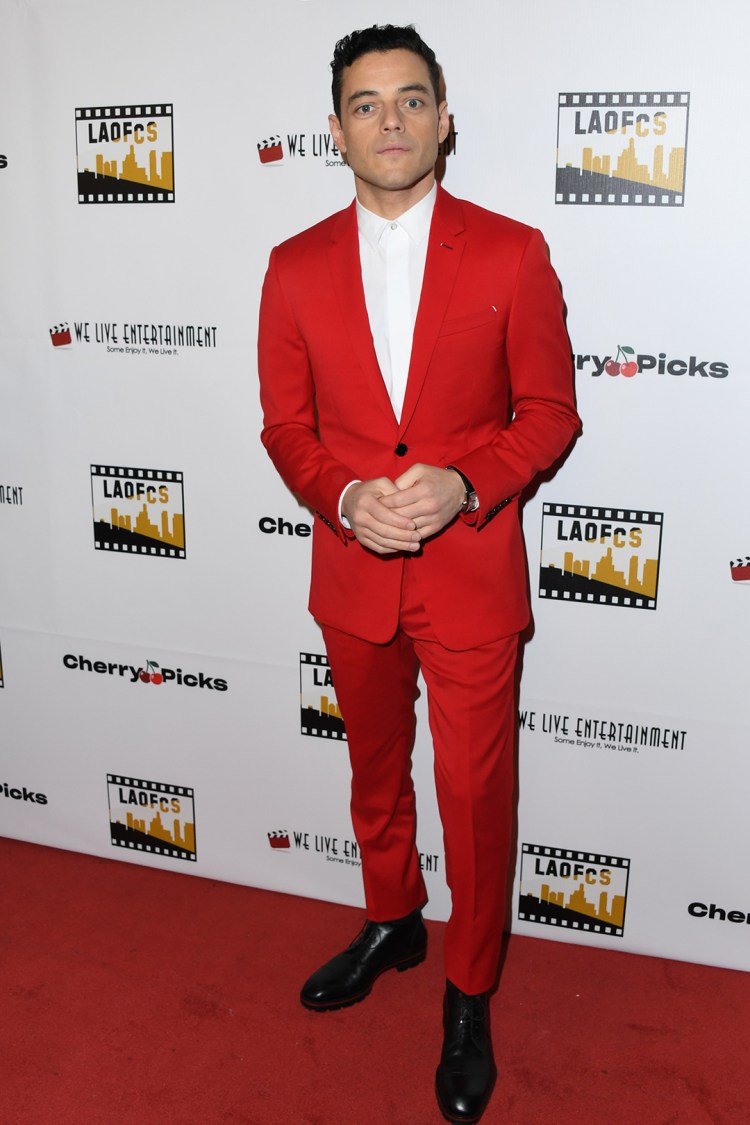 How comfy does Rami look? ??

Another red monochrome moment, but this time there’s less pomp and circumstance. Here he’s swapped the red button-down for a simple white one and added substantial boots with a lug sole. Malek just seems more at ease. We would maybe wear this to an event, but it would need to be something kind of outlandish—like, say, a film festival. 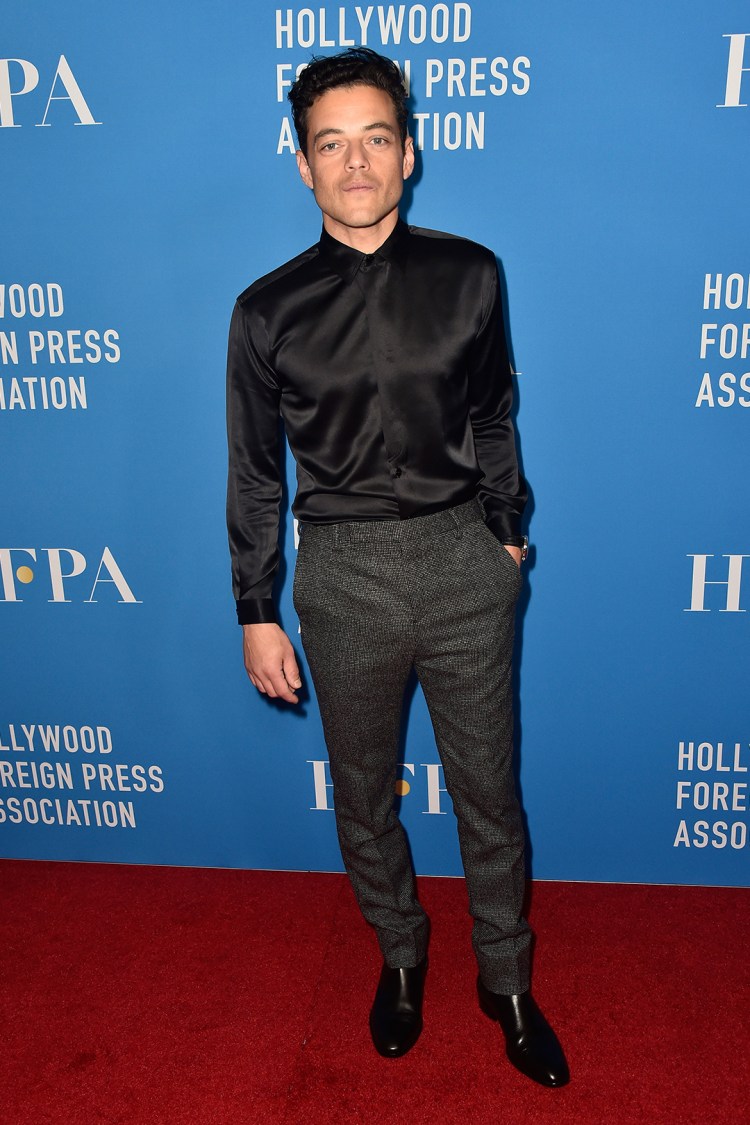 One of our favorite Malek looks, this is the most replicable and ultimately wearable. Simple gray tweed slacks with a shiny black button-down tucked in. He looks so relaxed and so lovable. 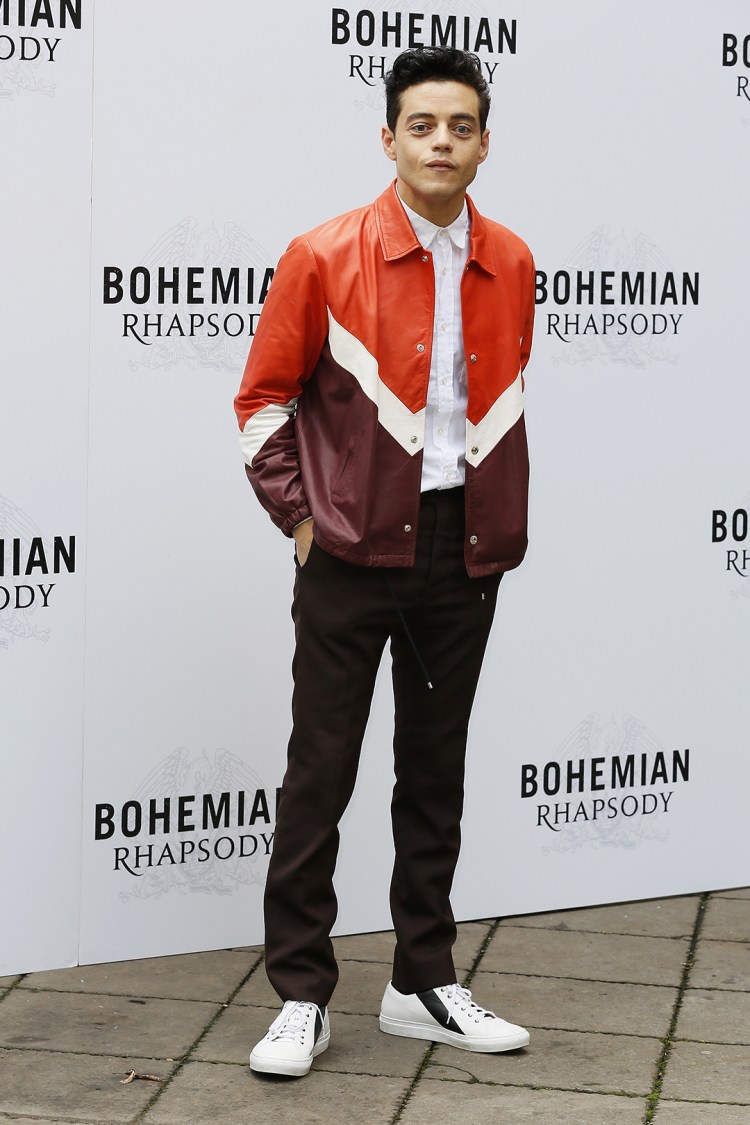 Would we wear it?: Yes, definitely.

One of Malek’s only street-wear looks, he pulls out a star moment in Rome on a photo-call for Bohemian Rhapsody. What a great jacket, made by Maison Valentino. What easy sneakers he’s wearing (Aquatalia). This look is the ultimate comf and ultimate cool. 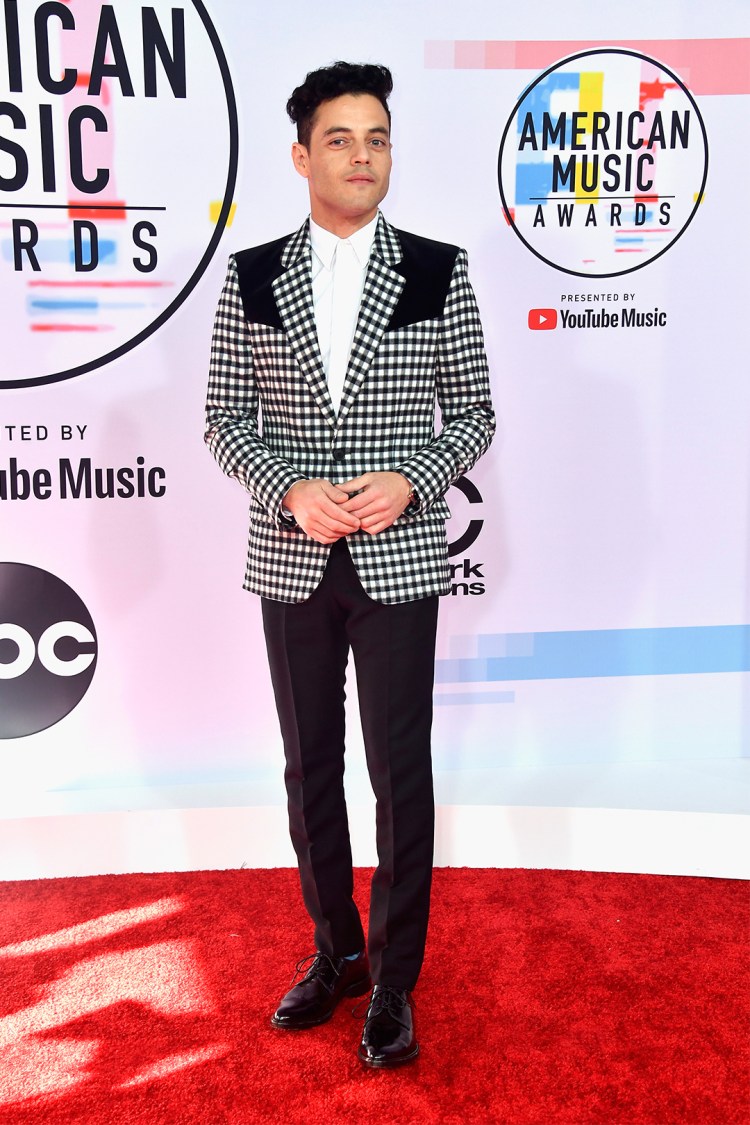 Here, Malek re-creates the things he knows work for him: a black-and-white palette, a statement blazer and a skinny, tailored fit. And he does it with great success. Copy this look ASAP. 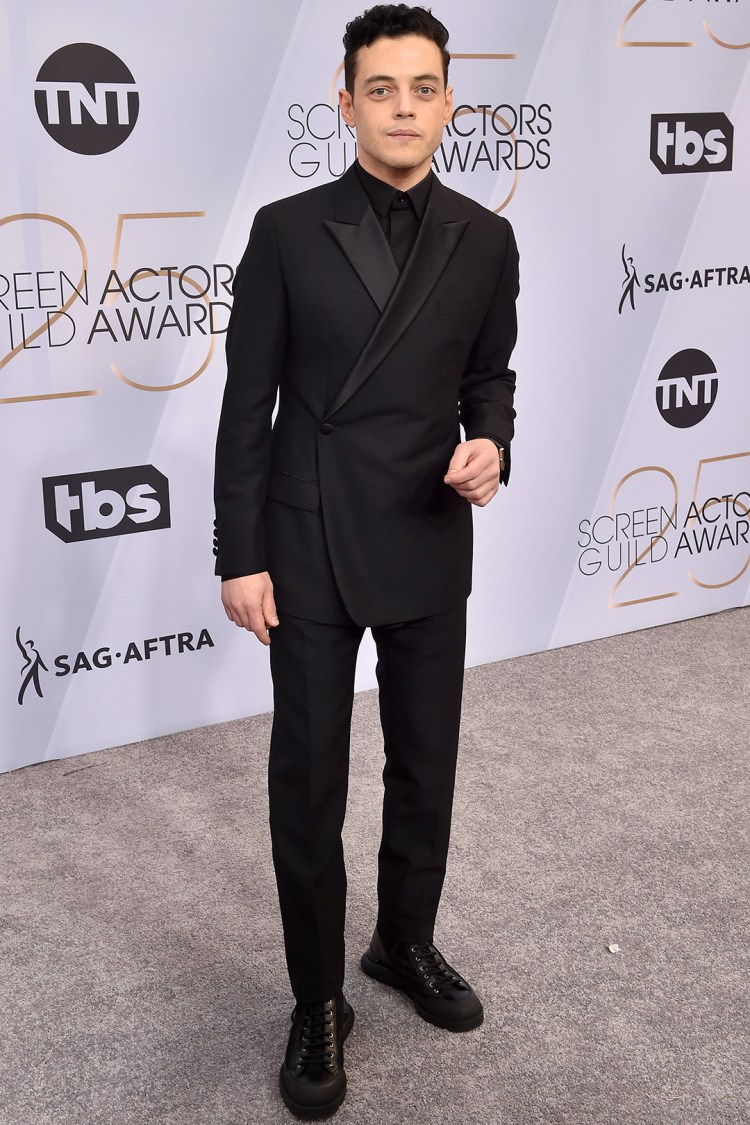 Would we wear it?: Yes, please.

We figure this look isn’t the most comfortable with its wrapped jacket, but boy does it deliver on style. The simple addition of an asymmetrical button on his Dior jacket launches this look into the stratosphere, and it is paired with sneakers of the same shade. Such a good vibe, Mr. Malek. Take this as proof that you can get away with sneakers at formal functions if they’re sleek and the same color as your fit. 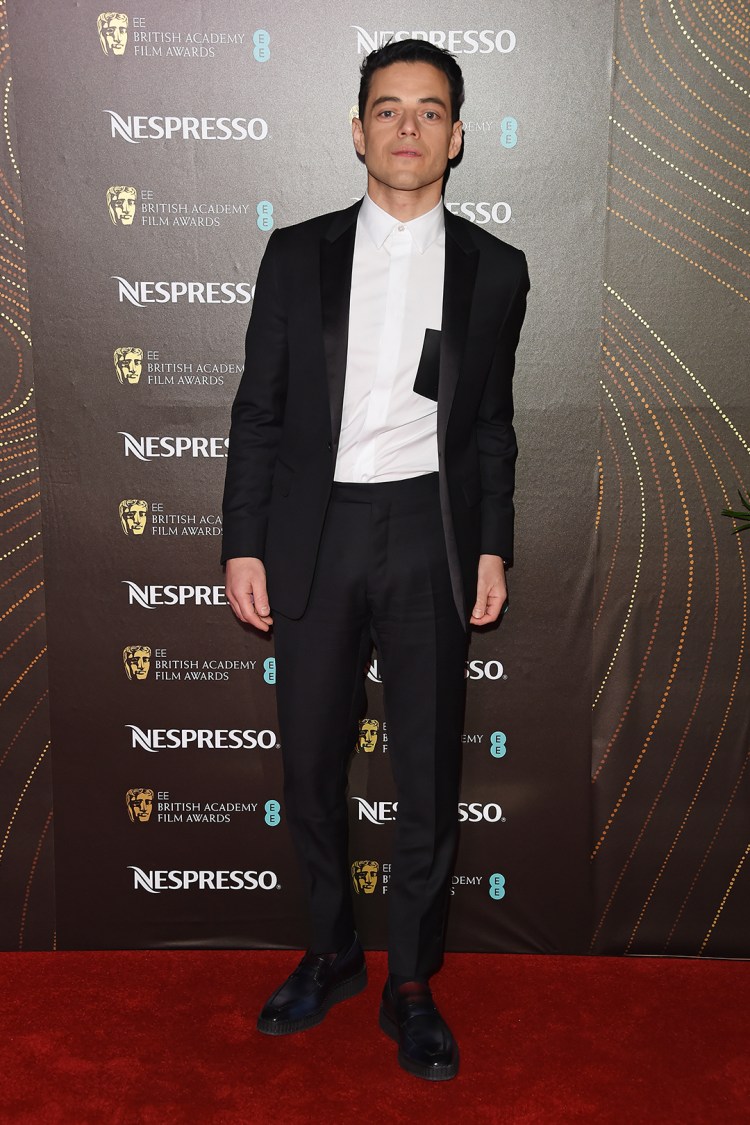 Would we wear it?: Absolutely.

This outfit would be nothing without that gorgeous black pocket peeking through. Malek’s classic buttoned-all-the-way-to-the-top style is deployed again to great aplomb in this Kris Van Assche for Berluti shirt. The shoes feel super modern and the dap-o-meter is high. Are you seeing the correlation between the comfy chick scale and the dapper scale? They’re connected. 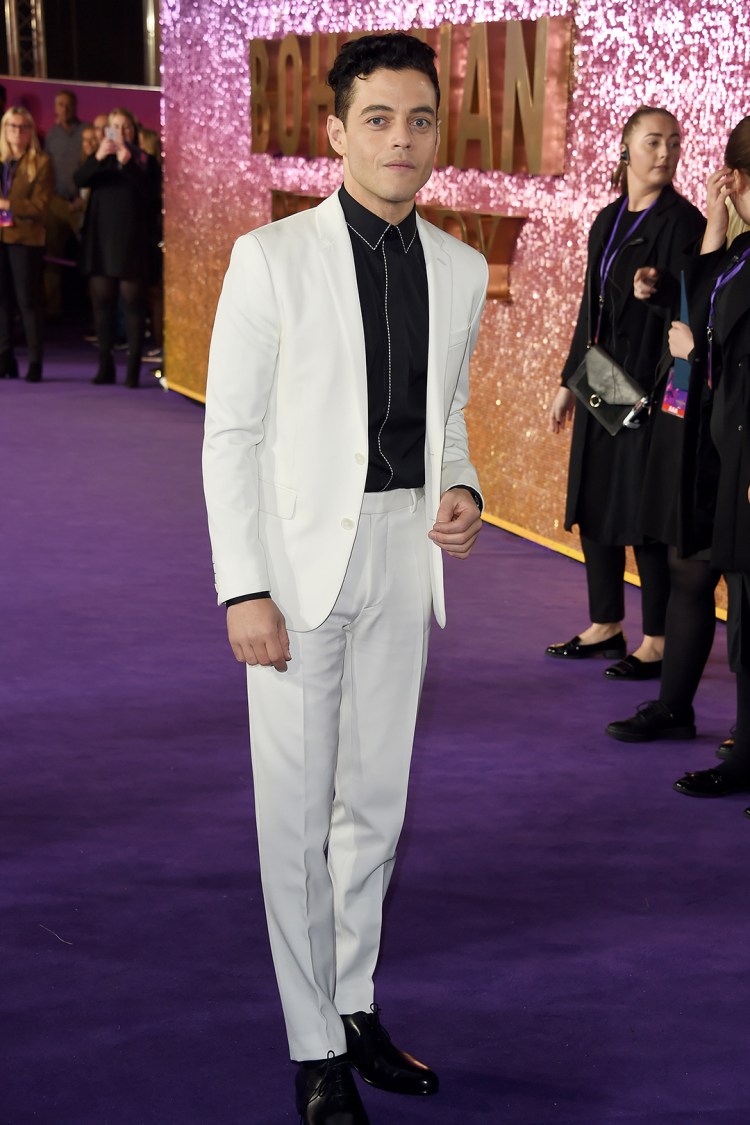 The look that passed both tests with flying colors is a Rami Malek buffet. For the world premiere of his career-defining film Bohemian Rhapsody, Malek didn’t leave a single style hack on the table. He’s wearing a tailored skinny suit in white and a button-down shirt in black with interesting stitch details, and he looks relaxed and happy.

Read more: These Are the Best NBA Fits from January