Why Does Luxury Fashion Cost So Much? 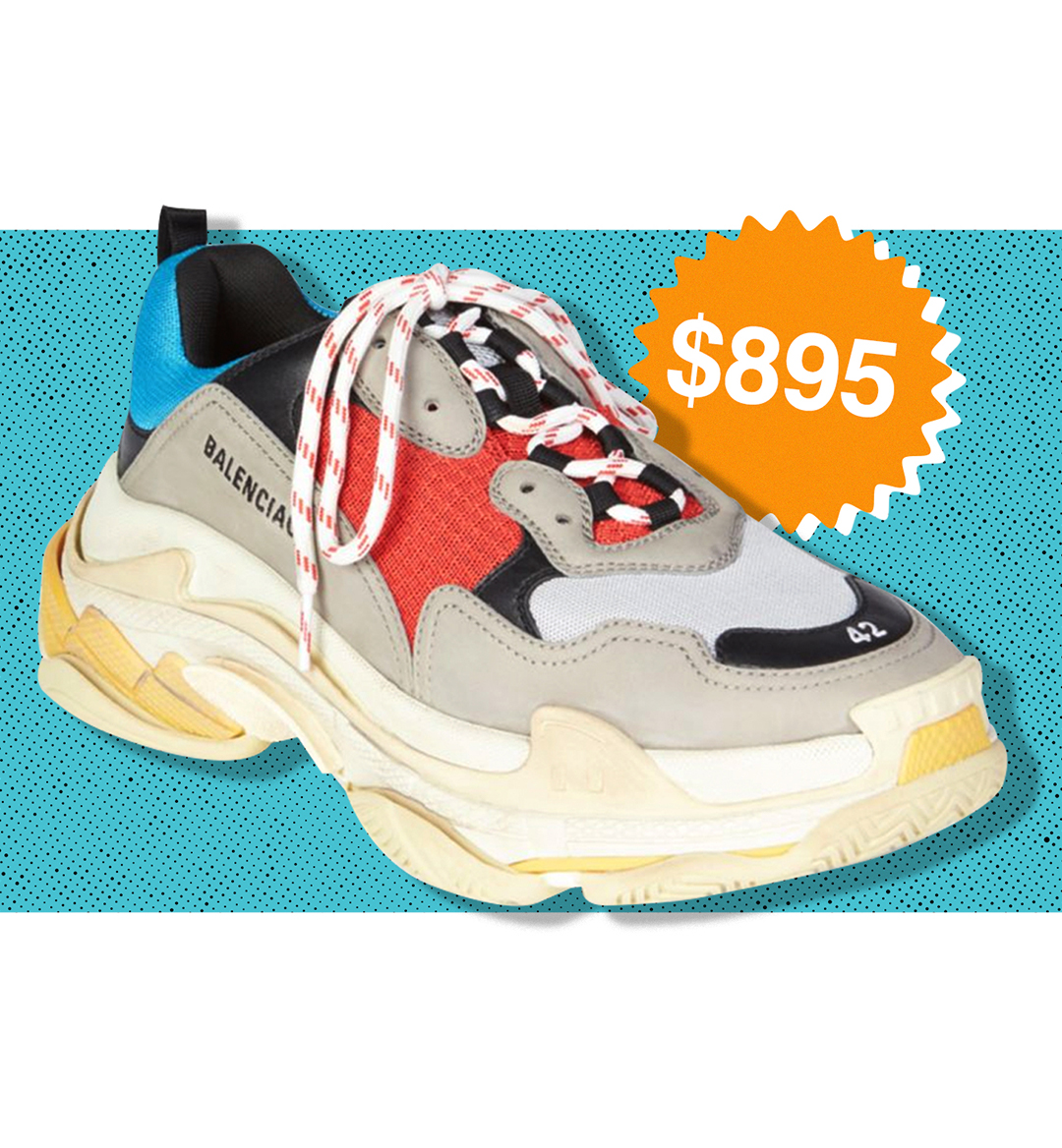 For a fleeting but character-building moment last year, I wanted to own a pair of Balenciaga Triple S sneakers. You might have seen them: The paragon of 2018’s ugly dad sneaker trend, they are molded around the foot like a daycare–made Plasticine mountain. Some come with mesh and contrasting colorways, like this Frankenstein one. Others come pre-dirtied so you can pretend to look poor. Don’t be mistaken, though—these sneakers cost $895, or a little over one month’s rent for me (I live in Bushwick).

That didn’t stop many sneakerheads from hunting them down. New York Times reporter Jon Caramanica documented his eight-month odyssey to secure a pair when they were first released. Then, three months later, rapper Wiz Khalifa ended them with a tweet bemoaning their ubiquity. By October of last year, the Triple S was on life support. Luckily, I paid my rent. On time.

Thanks to these chonk sneakers, however, Balenciaga is nearing €1 billion (or $1.13 billion) in revenue. A lot of the brand’s recent financial success is owing to the Triple S. Now millennial men are some of Balenciaga’s most prized customers. But why do any sneakers cost a wallet-burning $895? Are gold flakes baked into the soles? Or are we just being hoodwinked by brands like Balenciaga, Louis Vuitton and Calvin Klein?

Tl;dr: How is this shit so expensive?

IF YOU STILL HAVENT BOUGHT A PAIR OF THOSE BIG ASS BALENCIAGA SHOES IN THIS CLIMATE I APPLAUD YOU. ??

In some cases, we are being hoodwinked. Though luxury menswear made up less than a quarter of the $1.7 trillion apparel and footwear market in 2017, according to Euromonitor, menswear is expected to outpace women’s wear sometime in the next three years. (Menswear currently accounts for 5 to 7 percent of all revenue at Louis Vuitton, but rumor is prices are going up thanks to men’s creative director Virgil Abloh.) To boot, teen spending is up on clothing, with dudes shelling out up to $2,600 a year on what they wear, according to a 2018 Piper Jaffray survey.

The way goods are priced is down to an exact science for luxury brands. Labels like Louis Vuitton and Balenciaga generally begin by using more “luxe” raw materials at the design stage, usually produced by manufacturers in Euro-Mediterranean countries. “It goes without saying that materials used by luxury brands are almost always—and sometimes by a multiple—more expensive than materials used for mass-market products,” says Jeremy Cai, CEO of a new invite-only marketplace called Italic. “For example, top-grade Italian leather suppliers will sell their leathers for several times what a commodity American leather supplier may charge, and a premium technical material that Gore-Tex sells will go for many times its lesser counterpart.”

Italic is hoping to democratize this supply chain by allowing consumers to buy quality goods directly from the same factories as top brands but without the branding. So, for example, you can buy an unbranded pair of shoes from the same factory that makes footwear for upscale brands like Church’s or Kenzo. “We mandate that our manufacturers use the same or equivalent-tier supplier, materials and craftsmen as their most premium clients,” Cai adds.

As one high-end retail executive in Britain explained, on the condition of anonymity, not every material that goes into a luxury item is necessarily luxurious. “Normally, things like coats, jackets, suiting, shoes and bags are made from absolutely gorgeous fabrics you wouldn’t ever find on the high street,” he said. “If you need proof, try on a Zara suit jacket and then try on a McQueen blazer.”

To put the luxury of Karl Lagerfeld’s Chanel into perspective, he commissioned this old arthritic woman in the French countryside to create braids out of fabric he would send her before a collection. pic.twitter.com/FIx8BA2Ssa

The idea stands to reason. Fast-fashion retailers have to produce quickly, and at scale, so quality is often sacrificed. But what about the recent trend of luxury streetwear? “Where things get murkier is in the rise of streetwear as luxury fashion items. How luxurious can a cotton T-shirt or sweatshirt really be?” the retail executive continued. “Often in these categories, the materials are made from and the factories they are made in are of dubious origin.”

Prices of raw materials dictate material trends in fashion. Not to get all Devil Wears Prada cerulean sweater on you, but if shearling suddenly turns up in the collections of ten designers, it can likely be pinpointed to the low cost of sheep hides six months prior. Luxury sneakers, for the most part, don’t rely on fluctuating prices of raw materials. Balenciaga’s Triple S shoe is made of leather, mesh, jersey and, at the toe box, a proprietary reflective 3M material, according to The RealReal. Triple S sneakers “were initially made in Italy, but the manufacturer of the shoe was moved to China, where they have a savoir-faire and capacities to produce a lighter shoe,” a customer service representative explained to one customer who thought the $895 meant a “Made in Italy” tongue tag.

Let’s say I bought a pair of Triple S sneakers at the RRP [recommended retail price] of $895 before taxes. I’d still have sticker shock, but let’s see how they arrived here. The “cost price”—an industry term for the base cost after manufacturing and labor is covered—is doubled to determine the wholesale price for online and brick-and-mortar retailers. Across the board, a retailer will generally add a markup of 2.3 times the wholesale price. If that standard markup is taken off, the price is about $390. That would represent the designer’s wholesale price. Halve that and you have the cost price, the actual cost of making the shoes: $195.

OK, so once these puppies are made, they head to one of a brand’s many outlets or a department store like Bergdorf Goodman, Saks Fifth Avenue or Barneys New York. “It drifts somewhere around where what we paid for it is between 30 percent and 50 percent of the full price we are selling it for. For instance, a pair of Balenciaga Triple S sneakers cost us £300 to buy from Balenciaga (they probably made it in China for £100) and we sell it for £695,” said the retail executive. “A Raf Simons T-shirt has a cost price of £95, we sell it for £265. Fine jewelry and watches are where the margin is much lower. The easy way to look at it is that everyone in the chain’s cost is a third.”

Where things get more murky is in the rise of streetwear as luxury fashion items. How luxurious can a cotton T-shirt or sweatshirt really be?

When retailers announce sales, they can comfortably knock off up to 50 percent and still make a profit. “We can usually make a profit up until about 70 percent, then we’re breaking even,” said the retail executive. “Most retailers now do 10 percent or 20 percent off sale prices (that could already be at manufacturer prices) after a sale has run for about a month in all markets. The aim at that point is to get rid of it because to store and handle the stock costs money, and you need to make room for new items.” To make sure you’re not getting hoodwinked, look for sale periods beginning in May and December.

I may never be so well heeled as to be seen stomping the pavement in clunky Balenciaga sneakers. But to know that I saved $895 by pumping the brakes on my short-lived impulse gives me a true sense of how luxury feels, and that is worth more to me than any snea—

Fuck it, add to cart.