Today is Mick Jagger's birthday, and we're rockin and rollin 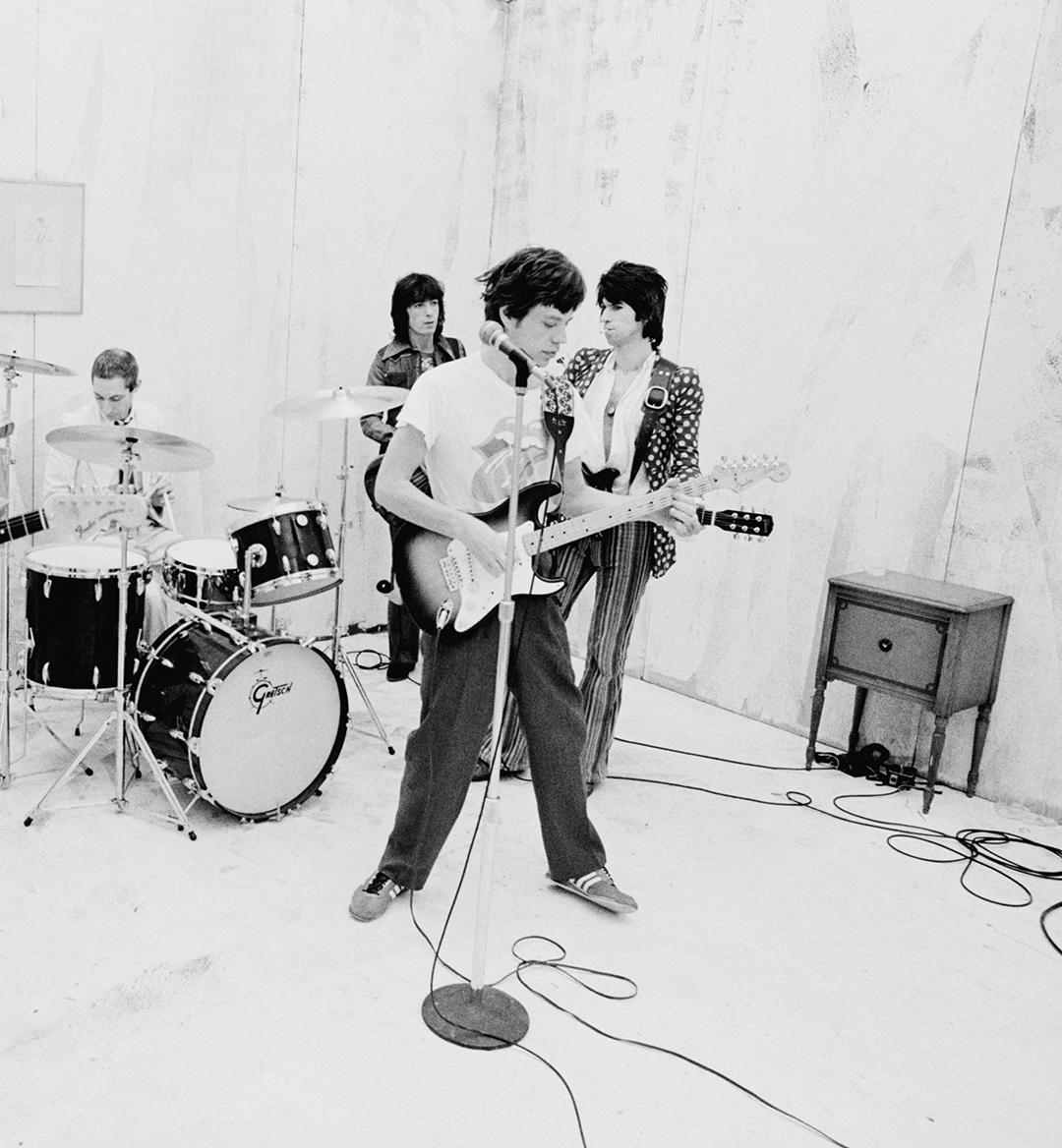 Are you a Rolling Stoner? If the answer is yes, then you already know today is a national holiday as Sir Michael Phillip Jagger aka Mick Jagger turns 79 today. Despite what Maroon 5 and Christina Aguilera said back in 2011, we don’t have the “Moves Like Jagger.” 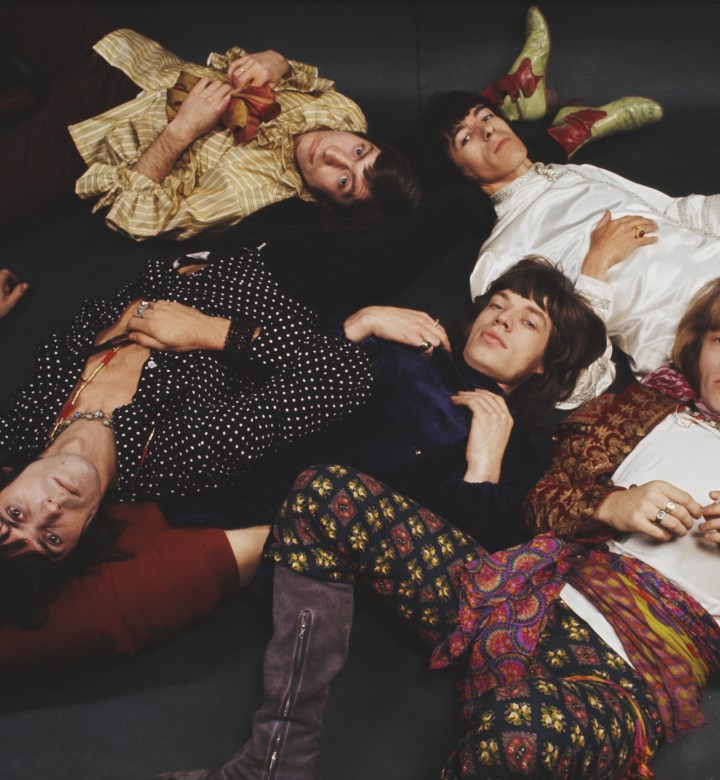 Nobody does. And nobody has his style either. We thought with today being Mick’s birthday, that it would be a great opportunity to continue our style series, by taking a look back at the Rolling Stones style evolution over the decades. We went deep into the archives for this one because why not? Let’s start all the way from the beginning.

The Rolling Stones made their debut in 1962, slowly but surely building a following by performing at various clubs in the U.K. At the time of their debut, they looked a little something like this… 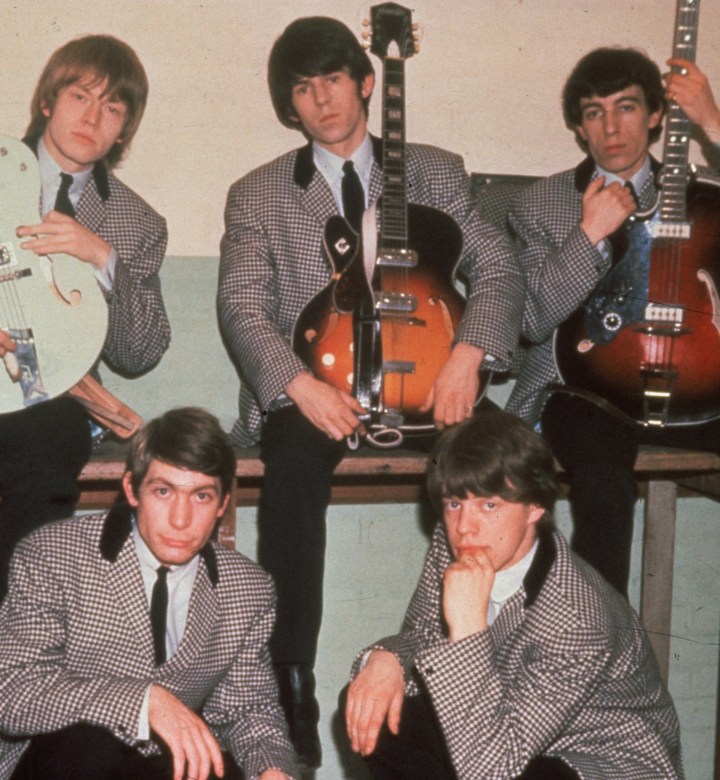 What?! Who were those young men in suits? Certainly not The Stones right? Wrong. Those were The Stones looking a little bit like The Beatles, which ultimately ended up being a no-go from their manager Brian Epstein who wanted them to develop their own look. What followed was a rugged tough down and dirty rock look that matched the direction The Stones were going musically. 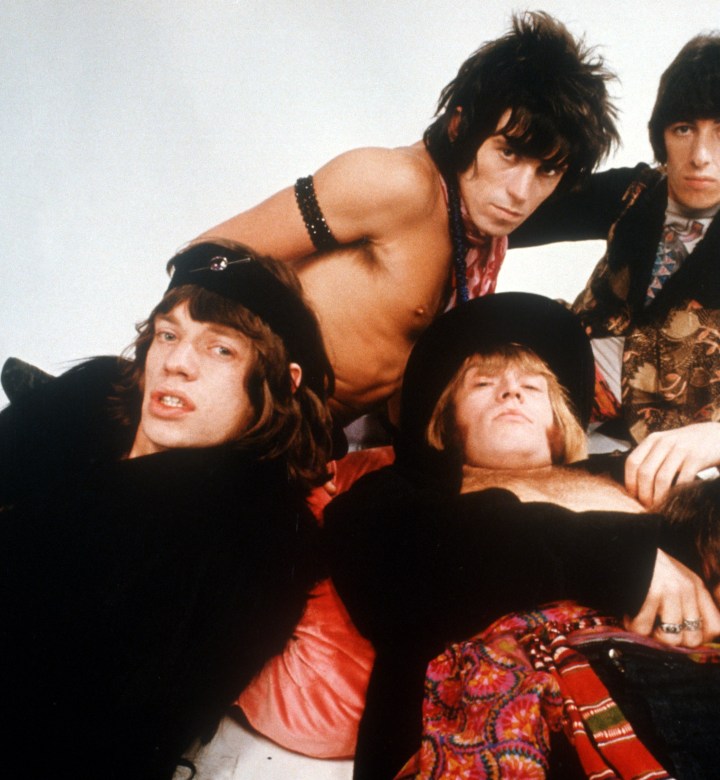 In general, we were beginning to see a shift in fashion in the latter half of the 1960s. Gone were the super conservative suits and dresses, and in were the hippie bohemian “Peace & Love” not a care in the world outfits. As The Rolling Stones fame continued to rise, we saw the introduction of military jackets, leather, and androgynous looks. Jagger himself began experimenting with his own individual style, playing around with custom glitter jumpsuits, shirt dresses, crop tops/jackets, and patterns. This leads up to the 1970s.

The Introduction of the Tongue and Lips Logo 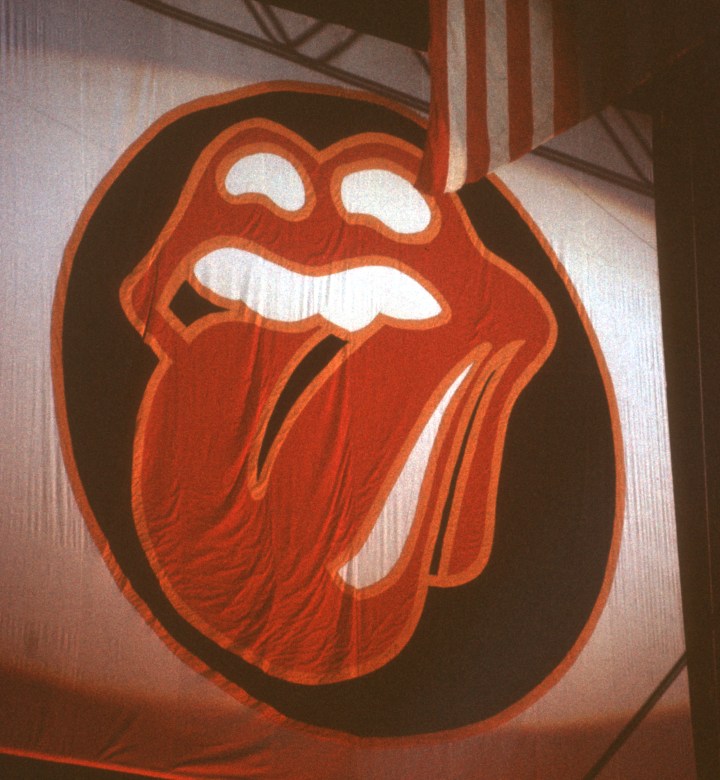 The funky electrifying 1970s. The 70s were an important time for The Stones because it’s the decade where they solidified their cultural icon status (the 1960s were when they started building it). For starters, The Stones official tongue and lips logo was officially introduced to the public in 1970, and it all started because the group wasn’t happy with the poster concepts for their 1970 European Tour.

The band sought out a design student to assist with the project, eventually discovering a young designer by the name John Pasche, who was in the final year of his masters degree at the Royal College of Art. 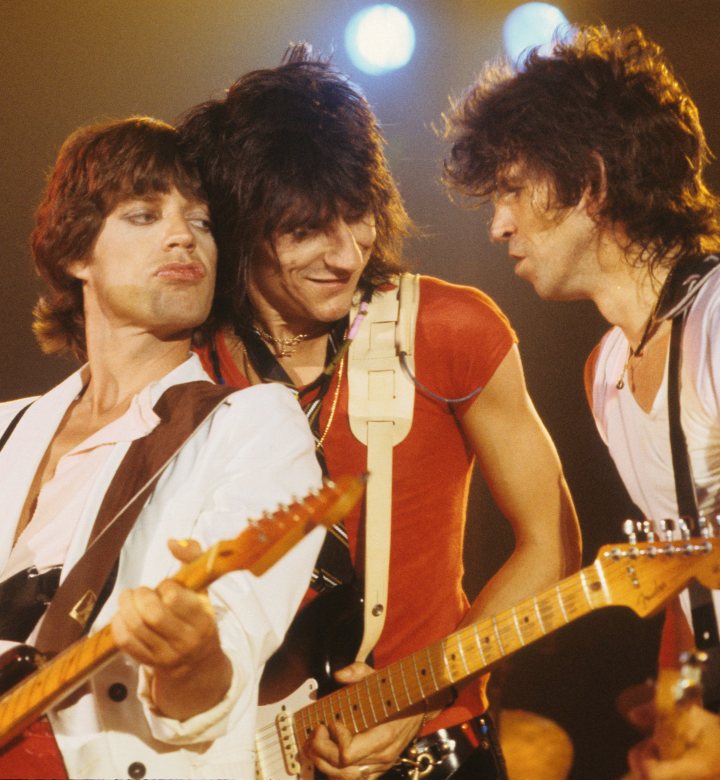 Approached by Mick Jagger himself, Pasche accepted the offer to work on the logo, drawing inspiration from the tongue of Hindu goddess Kali, as the tongue represented the band’s rebellious attitude, while also referencing sexual connotations. And as they say, the rest is history as the Rolling Stones logo has since gone on to become perhaps the most iconic in music history. The logo would go on to make its debut on The Stones 1971 Sticky Fingers album. 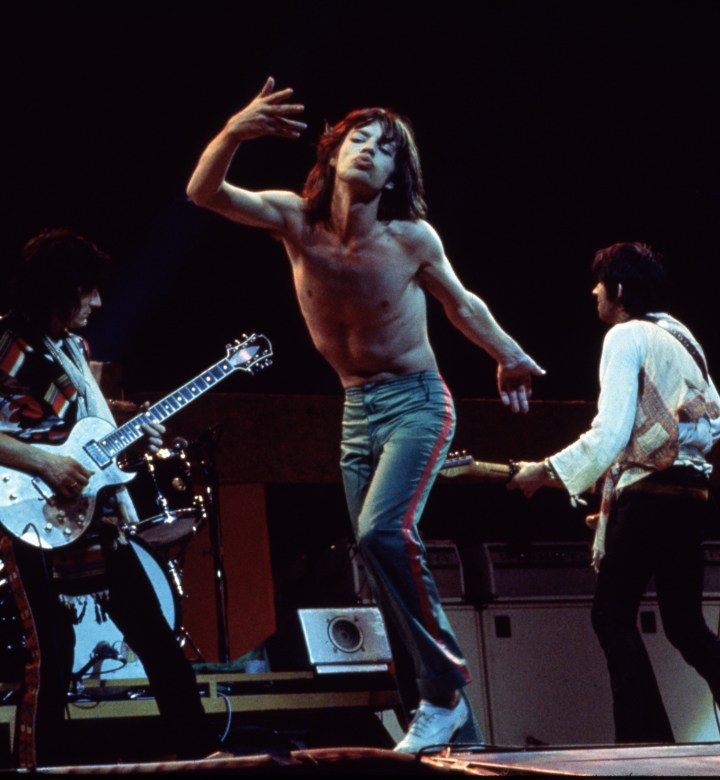 It was also during this time that Mick Jagger and Keith Richards would go on to be known as “The Glimmer Twins.” Both had a love of drama, theatrics, and flair, which would often be reflected in their style. Glitter, sequins, loose pants, and crop tops were recurring themes for the group, whose fashion alternated between something of “Rock Gods” and casual hippies. V-necks were also a big staple in their wardrobe (especially Mick’s), and this is mostly what we saw from The Rolling Stones through the course of the 1970s. 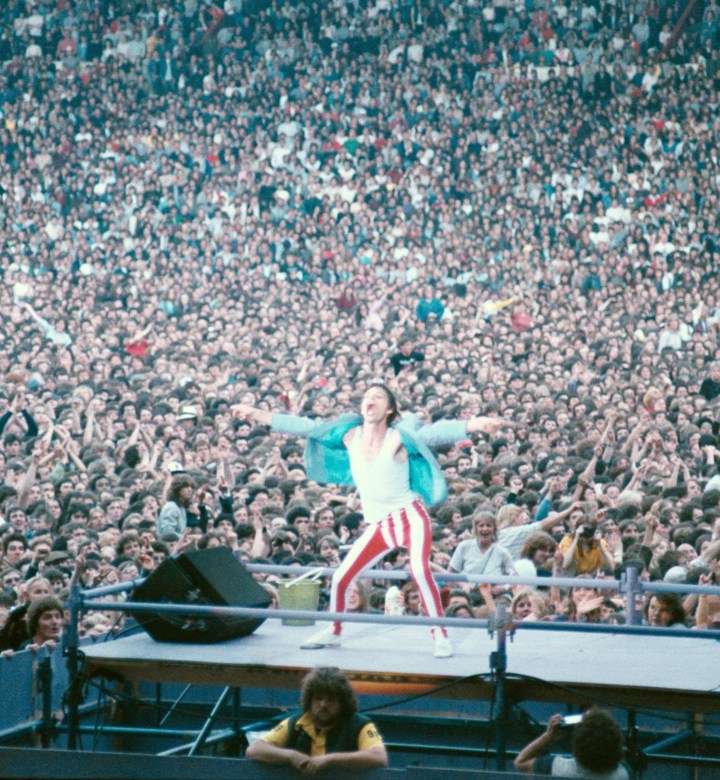 The beauty about The Rolling Stones is their ability to adapt to the times while staying true to the elements that make them, well, The Rolling Stones. The majority of the 1980s were all about the bright neon colors, which we saw reflected on Stones album covers like Dirty Work. Spandex was also heavily incorporated into Mick Jagger’s look as well.

This was also a time period where the band was able to achieve a second commercial peak so to speak amongst younger fans with a multitude of hit singles and their biggest concert tour to date, “The American Tour.”

What about the 1990s? Still cool as ever, we saw The Rolling Stones rocking blazers, aviators, and grunge style suits during their performances, once again matching their style with their evolution as a group. 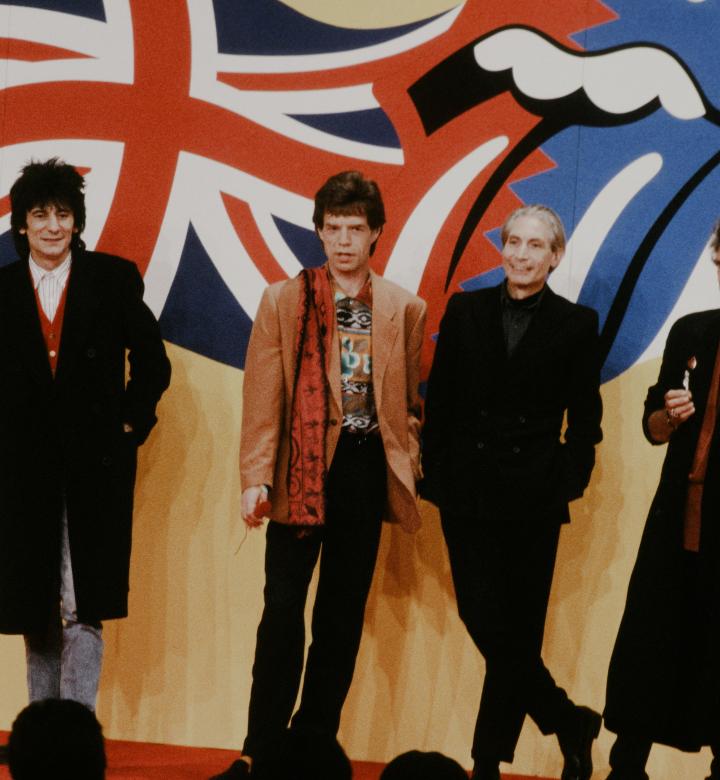 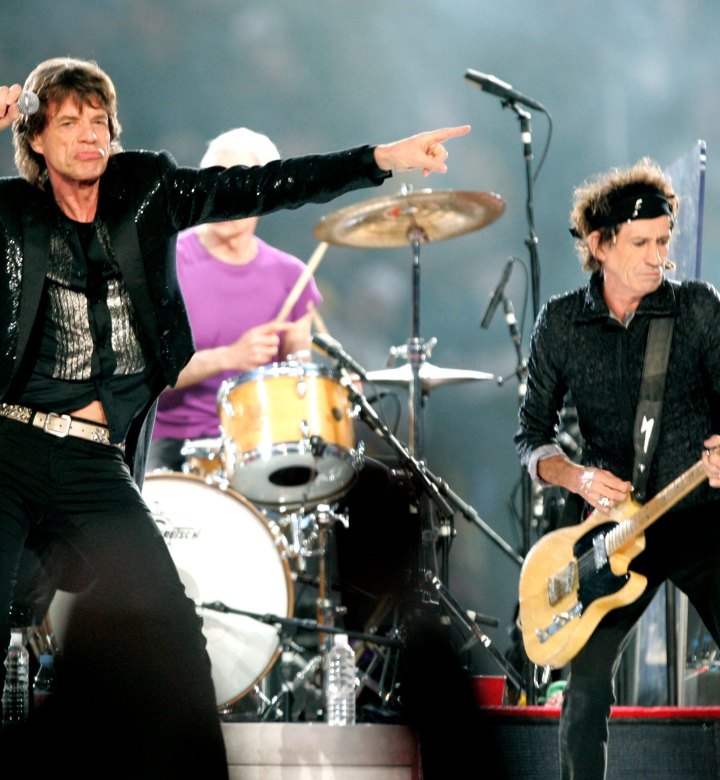 Since 2003, The Rolling Stones have been working with rock n roll stylist William Gilchrist. A bohemian hipster himself, Gilchrist has been the master behind the group's looks over these past twenty years. In addition to The Stones, Gilchrist's client list includes: Jude Law, Versace,  L'Uomo Vogue, Moschino, and plenty more. The focus of this era has definitely been maturity and individuality, which Gilchrist has executed beautifully.

Where would be without The Rolling Stones, their incredible music, and impactful style? Nowhere. Let’s all attempt to “Move Like Jagger” today.