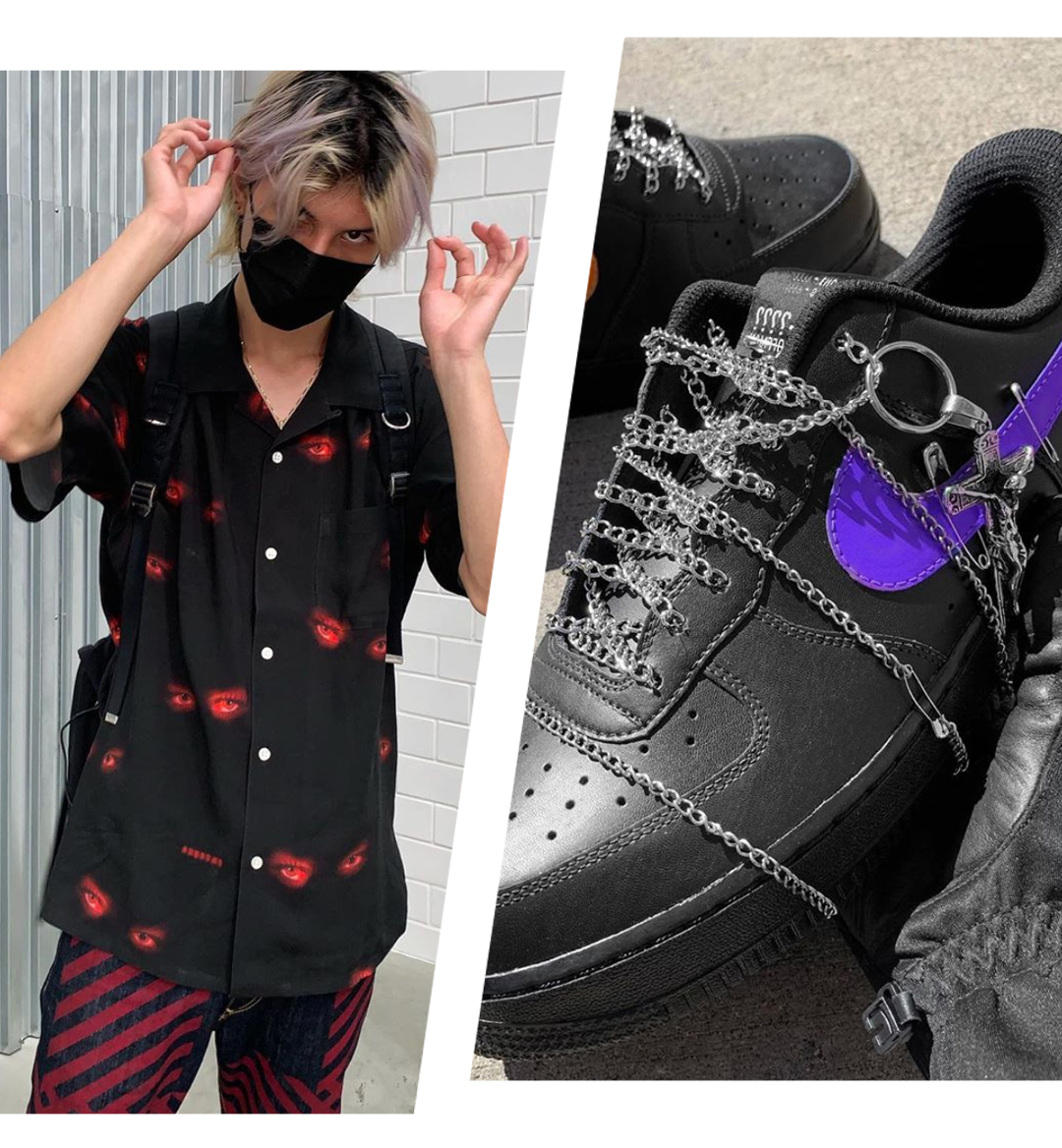 Keagan Hoffman’s ChainForces are edgy. The shoes are wrapped in barbed wire and sell for hundreds of dollars; however, they are exclusive. The only way to get a pair is by negotiating with Hoffman himself. The ChainForces series has propelled Hoffman to the forefront of the sneaker industry and allowed him to connect with several high-profile celebrities like Playboi Carti and Thouxanbanfauni, as well as outlets from all around the world such as Grailed and The Wave Mag.

Much of Hoffman’s entrepreneurial success is due to the power of social media. The ChainForces were his first attempt at fashion, and they immediately became a massive success after Playboi Carti was filmed opening them on Instagram. Soon everyone began to wonder who the designer behind this one of a kind shoe was.

Blending elements of alternative rock and classic streetwear, Hoffman has found himself at the epicenter of a new trend in men’s fashion. However, the young artist doesn’t appear to be affected by the spotlight. Hoffman is not willing to sacrifice the quality of his work for the sake of cash and prefers to keep his clothing scarce and in-demand. Inspired by the underground SoundCloud scene, which emerged in early 2014, Hoffman’s clothing rekindles the innocence of a movement now fully entrenched in mainstream culture.

Where do you live?

Keagan Hoffman: I’m in Los Angeles, and I’ve been living here for six years. I came to the U.S. from Tokyo after the earthquake. My dad is American.

How does it compare with the United States?

Hoffman: People in Japan are more influenced by fashion in Europe but have their own style. The clothes coming out of Japan are more detailed compared to American brands like Stussy, Supreme and Off White, which are more straightforward, in my opinion. And that’s like the culture in America: We like fast food and want things quick, but in Japan, they have a slower pace, and it leads to more quality.

How does your Japanese heritage influence your clothing?

Hoffman: I do graphic design, which goes hand in hand with making clothes. I am very particular about laying out my graphics. I take a long time to consider where to put them on the garments. I first put the chains on, then I focus on the pendant and finally the rhinestone. I would say it makes me patient, and I take my time. I care about quality and not if I’m making a lot of clothes. The amount I make fluctuates each month, I don't really know how many pieces I will make, but every year I get more productive and progress more.

When did you get involved with graphic design?

Hoffman: I started in elementary school, just having fun and learning from YouTube. But in high school, I got into making cover art for musicians. Now I still do graphic design, but I’m also really focused on my clothing. I got into graphic design because I didn't want to pay people to make my art for me—I wanted the credit to be able to create my idea exactly how I wanted it and not have to micromanage people. It gave me the freedom to do what I want creatively.

What’s it like to work with other people when you started for yourself?

Hoffman: You get open-minded about other people’s ideas, and they often come up with cool ideas that I wouldn’t have thought of, but I know they will be interesting to work on. When I hear their ideas out, I get inspired; they are the pencil, and I become the paintbrush. I did graphic work for Fauni, Xavier Wulf [and] Unotheactivist.

How did Los Angeles affect your career?

Hoffman: I meet people here, I’ll talk to them, and if we get along, we go from there. I’ll meet a lot of people by Melrose and around in Hollywood, so it’s definitely been great being here.

How did your Halloween clothing perform?

Hoffman: Really, really good, the response has been great. One NFL player wanted it, and another rapper did as well. I also got a pair to Faze Banks. It dropped on Oct. 10—we made a set amount, and it’s not cheap. It’s actually a collab between Blazy and me, and we met by following each other on Instagram. I thought his work was cool, so it was great to be a part of his first drop.

What was the inspiration behind your 1999 sweaters?

Hoffman: I just wanted to make a knit sweater—there wasn’t any thinking behind it. I initially wanted to put the graphic on a hoodie, but I didn’t like how it came out, so I thought about putting it on a sweater, and the pixel design worked out nicely. It was really a pure coincidence.

How do you feel seeing your clothes resold?

Hoffman: I like it. It’s great to see people seeing worth and value in my clothes. I take it as a big compliment.

Were the ChainForces your first successful clothes?

Hoffman: Yup, they were actually the first pair of clothes I ever made. I was at my friend’s house, and I had pants with a wallet chain and a necklace on at the time, and I thought maybe I should make a shoe that correlates with my outfit since my friend had Air Forces with silver shoelaces and I thought, “What if it was a chain?” Then, we went to a hardware store—I bought them and put it on a Converse, but it wouldn't hold on because the Converse shoelace hole is wider. So, then I thought about using the Air Forces and put "1999" on the back—the year I was born—and question marks as a symbol of not knowing when I'll die, and it gave a story behind the shoe.

How many variations are there?

Hoffman: Purple, silver, black and red, green, and...I think that’s it. Black and red are the originals, and they get the most love. I don’t know how many I have made; first, I started selling through a store but then decided to sell them through specific orders, and they go for $800 a pair. They are in high demand, and I want the price to reflect my worth and value, which is fair. Mostly celebrities purchase them. It’s unintentional, but it’s very popular amongst people with large fan bases, and when their friends see it, they want it. Clothes are my stable income, but I want to explore music production, and I do have a song coming out with Xavier Wulf that I produced, so I’d like to become a more established producer.

What are you working on now?

Hoffman: I've got a new hoodie, and I’m working on Xavier Wulf’s Hollow Squad merch. I don’t know when it’s coming out, that’s up to them, but I already made the design.