What is Nike ACG? 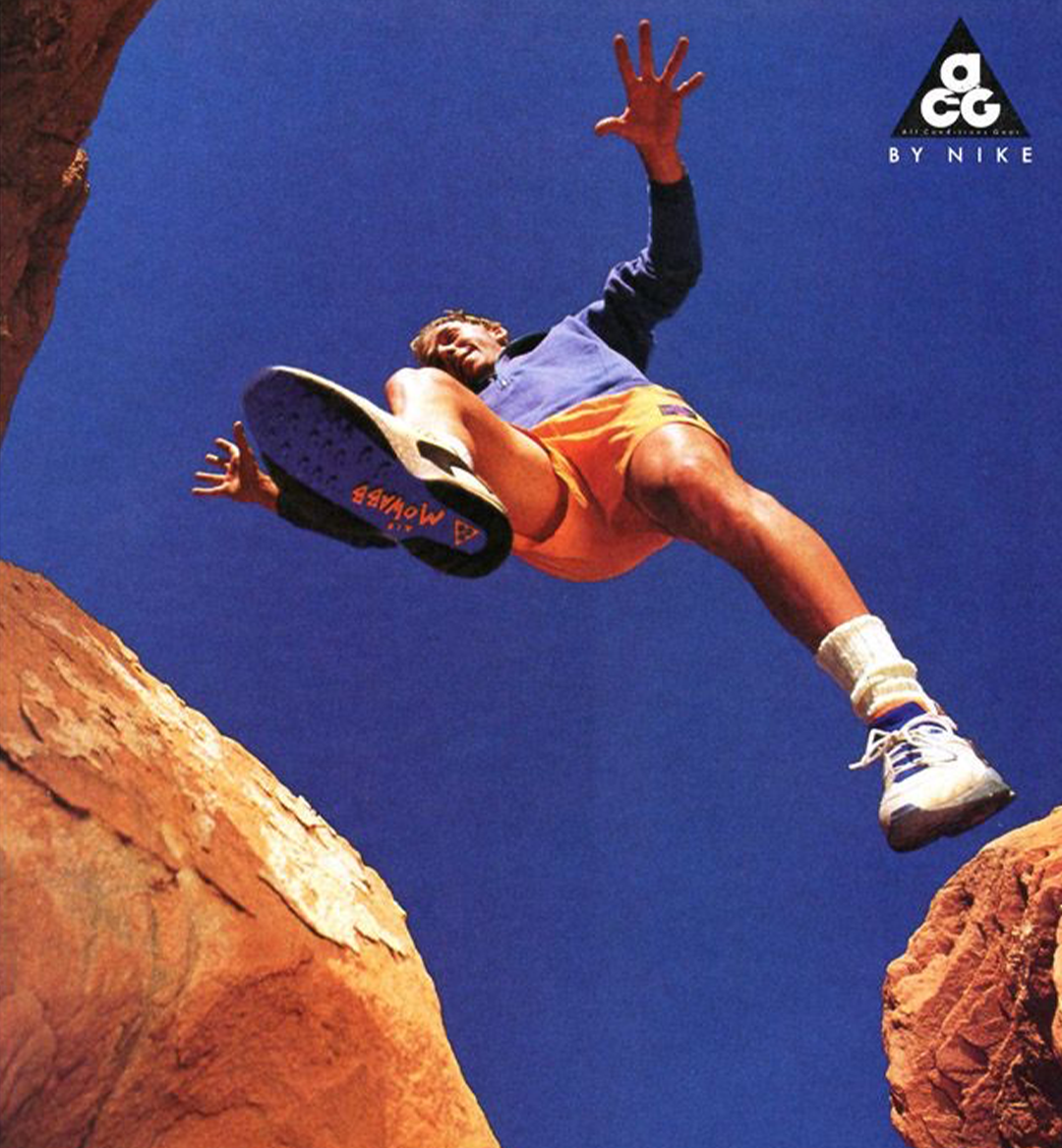 Nike. We all know it. Originally founded in Eugene, Oregon by Bill Bowerman and Phil Knight in 1964, the brand has since gone on to become the largest manufacturer of shoes in the world, and it's signature check logo is instantly recognizable. Nike has built a reputation for performance, and with that it has explored every avenue available within the realm of sportswear. However, very few of Nike's endeavors are quite as legendary as Nike ACG.

What is Nike ACG?

Nike ACG—an abbreviation for “All Conditions Gear”—is the successor to Nike’s hiking line beginning in 1981. The original line was Nike’s first venture into the world of outdoor sports, and saw the release of a trio of footwear that would set the tone for years to come: the Lava Dome, Magma, and Approach. The Lava Dome was a flexible, rugged trail shoe, while the Magma and Approach were, well, approach boots. 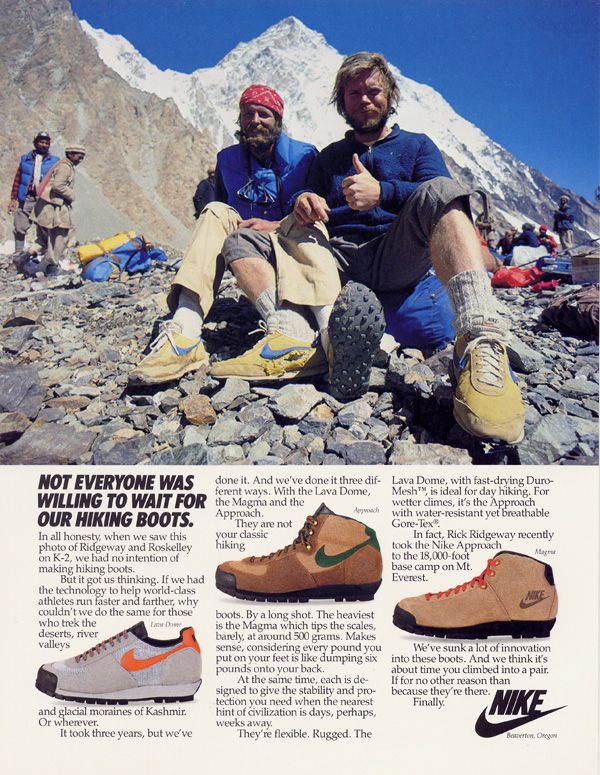 Even for the time, these three made revolutionary leaps and bounds in hiking technology. For starters, they were incredibly lightweight. The heaviest of the three was the Magma, clocking in at just 500 grams. The Lava Dome featured a fast-drying breathable mesh known as Duro-Mesh, while the Approach was one of the first footwear applications for GORE-TEX (Nike was one of the first companies to receive commercial orders in 1979).

The early 1980s ushered in a new era of technology geared towards the outdoors, as hikers shed their heavy leather boots in favor of these new, lightweight designs. Alongside Nike, brands like Adidas and New Balance were eager to try their hand at a hiking silhouette.

The shoes also shook the market visually, boasting bright colored checks and details that stood out against the muted tones seen elsewhere on the shoes. The style was reflective of Nike’s contemporaries like Patagonia and The North Face, whose colorful designs were the next wave of outdoor clothing. 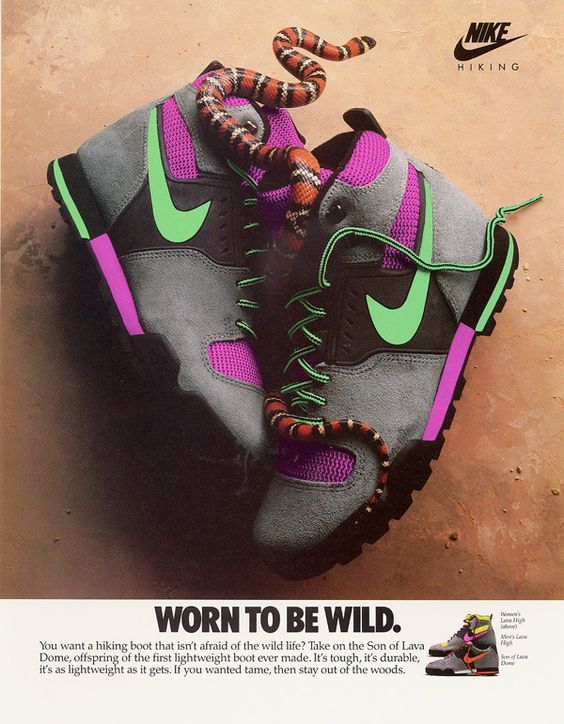 The Lava Dome remained in production until 1985, until it was supplanted by later Nike designs. Nearly a decade later, in 1989, ACG was truly born. Out of the ashes of the hiking line rose something much greater, much more all encompassing. Rather than focusing solely on hiking, ACG ventured into the realms of rock climbing, kayaking, biking, and pretty much anything else you can imagine doing outside. Early releases from this era included the Son of Lava Dome, an updated version of the Lava Dome, and its brother the Lava High.

Nike also explored well beyond the realm of footwear, and with GORE-TEX now at its disposal the Oregon based giant manufactured everything from waterproof ski gear to windbreakers. By the time the 90’s rolled around, the outdoors was seemingly opening up as more of America’s middle class found themselves able to participate, sowing the seeds for ACG’s breakthrough success.

In 1991, ACG released arguably its most iconic shoe: the Air Mowabb. Conceived by legendary footwear designer Tinker Hatfield, the Air Mowabb combined elements of an earlier ACG shoe, the Wildwood, and the recently released Huarache. Inspired by Native American moccasins and the design’s namesake Moab, Utah, the Air Mowabb informed much of ACG’s early design language, with motifs like speckled soles and the infamous plastic Huarache heel spotted on many later releases. Several other classic designs followed: 1993 saw the release of the Air Deschutz sandal, and in 1994 ACG graced us with the iconic Air Moc and Air Mada. 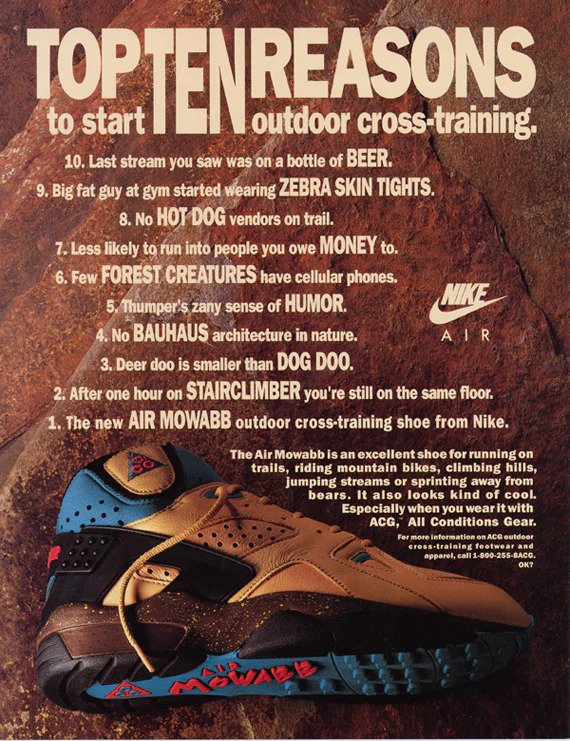 The ad campaigns surrounding Nike ACG were as unique as the products they sold. In a landscape of advertisements filled with statistics, ACG’s tongue-in-cheek marketing campaign fuelled the growth of the division’s cult following. A poster for the Air Mowabb reads, “Top ten reasons to start outdoor cross-training,” with numbered points like “10. Last stream you saw was on a bottle of beer.” and “2. After one hour on stairclimber you’re still on the same floor.” 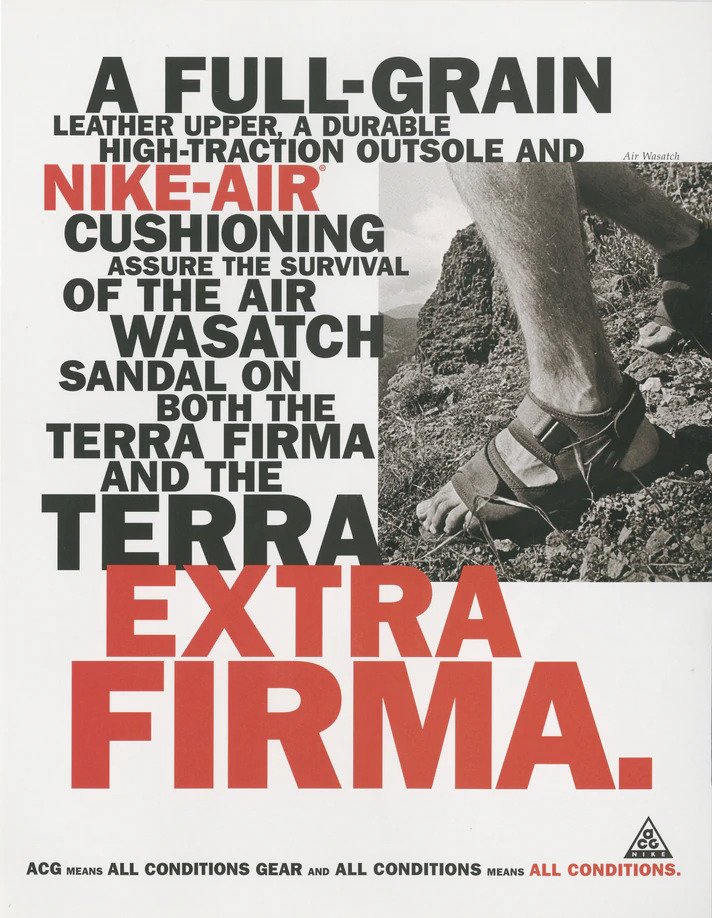 In the mid-90’s, ACG made a gradual, yet distinct pivot away from its bright, flamboyant image. Bold colors were replaced by muted tones on sleek garments, building the foundation for what would become the techwear we know today. The brand moved away from its explicit outdoor context, and directed its focus on the urban market. This era would eventually become known as the “Lungs” era, characterized by the safety orange triangles that resembled lungs and ultimately formed the new ACG logo. For many collectors of the brand, this era is considered a golden age of Nike design.

New clothing designs became more infused with technology as time progressed. On top of their long standing relationship with GORE-TEX, Nike developed their own breathable and waterproof textile, Storm-FIT. Used when GORE-TEX’s full capabilities weren’t necessary, Storm-FIT allowed ACG to massively cut production costs and opened the line up to a larger market. ACG began incorporating RECCO technology into its outerwear, a system involving an embedded radar device that allowed the wearer to be located in an emergency. Other technological innovations from the Lungs era include (but are not limited to): therma-fit fleeces, dri-fit underlayers, fully gusseted footwear with central zips and neoprene rubbers to block out debris, 3M reflectives, and 3M thinsulate.

However, despite all of ACG’s exciting innovations, Nike pulled ACG out of the North American market in the early 2000s. This left most of the stock in Europe and Asia, leaving many of Nike’s designers wondering if their designs were even hitting stores. Despite the massive loss, ACG designers were still pumping out large amounts of clothing. Some of ACG’s most iconic pieces ever were produced during this era. In 2008, Peter Valles designed the AirVantage jacket, meant to address some of GORE-TEX’s shortcomings. Some of the GORE-TEX fabrics were too stiff and inhibited movement, so Valles developed an inventive system to circumvent the issue: air insulation.

The jacket's construction involved the use of an extensive air bladder which molded to the wearer's shape and could be inflated via a nozzle on the neck of the jacket. The ingenuity of the AirVantage exemplifies the boundaries that were pushed by the Lungs era of ACG, where garments revealed their inner workings to users through specific scenarios showing that even the smallest minutiae were pored over and perfected.

Where is ACG Now?

Unfortunately, things took a turn for the worst in 2008. From then until 2014, ACG entered a period of relative obscurity. ACG's founder, Steve McDonald, left the brand in 2008, and Nike decided to restructure. Action sports, like skating, had begun to dominate and market trends began to change, leading to the eventual consolidation of Nike SB and ACG. The designers, who had previously worked separately, would now be operating under the Action Outdoors department.

By 2014, it had become agonizingly clear that Nike was at a loss with ACG and desperately needed to revitalize the brand. Enter Errolson Hugh, co-founder of Acronym. By the time he joined forces with Nike ACG, Hugh was already a legend in his own right. He founded Acronym in 1994 alongside Michaela Sachenbacher, and the pair have since developed the brand into the posterchild for the 'urban ninja' aesthetic.

Initially, the duo quietly designed outerwear for other companies until eventually building out a label of their own. In the following years, Acronym has forged a distinct, post apocalyptic identity that feels as though it's straight out of a Hideo Kojima game (Hugh actually designed a real life version of the jacket worn by Norman Reedus' character). The brand is built upon a foundation of modern utility, geared towards the urban explorer. Perfect for ACG, right?

The result of Hugh's involvement in ACG found its home at NikeLab, the brand's division for innovative products. The garments themselves were obviously of high quality, but on a macro level the project felt more like a collaboration between the ACG and Acronym than a truly homogenous mix of the two brands' identities. Hugh's ACG was dark and brooding, and was a distinct departure from the irreverent and rebellious spirit that the brand was founded upon.

Four years later, in 2018, Errolson Hugh passed the position to James Arizumi for 2019. The designer came from Nike SB with a background in tennis and gold at Nike, and was given a clear mission when he arrived at Nike ACG. Less tech, and more soul. Arizumi embraced ACG's roots, but still continued to expand the label's repertoire. He has since looked to other Nike divisions like football, basketball, and running for the first time in ACG's history, incorporating the best innovations from each into his new work.

Gorpcore and the Future

It's clearly worked, as Nike ACG has been everywhere as of late. Of course, Arizumi had the good fortune of taking over during gorpcore's time in the limelight in the fashion world. Alongside this, a distinct interest in the vintage garments from these brands has rekindled a market for vintage ACG, further highlighting the greatness that arose during the brand's heyday. It's clear that ACG is in good hands now though, and we can only hope for a future that balances innovation and new tech with the giddy anticipation of the outdoors that made the brand so great to begin with.