‘Once Upon a Time in Hollywood’ Style: Are You Pitt or DiCaprio? 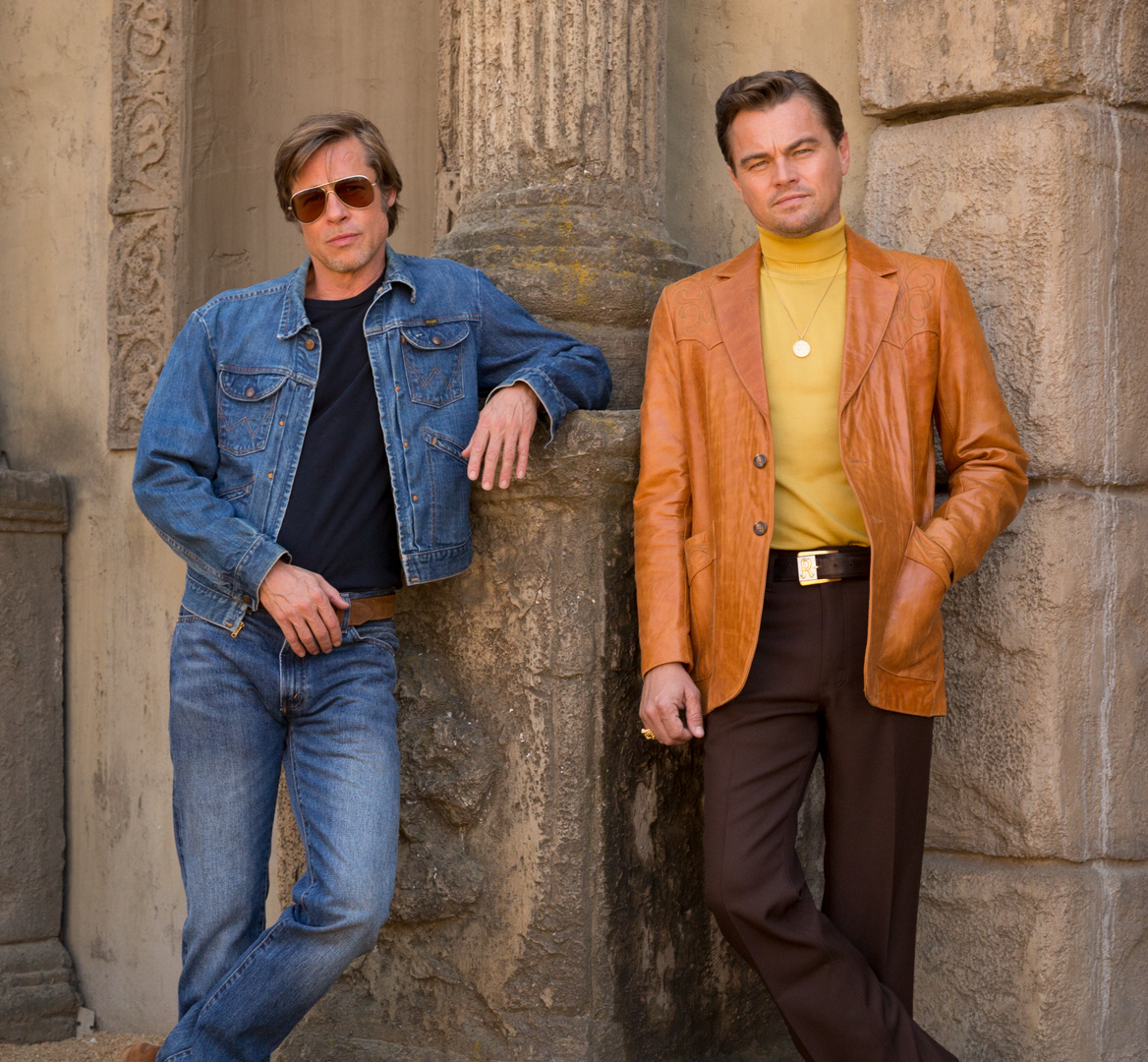 The Hollywood of the ’60s was a fairy tale.  Some of the greatest cinematic works were produced in this era—from Butch Cassidy and the Sundance Kid to To Kill a Mockingbird to Lawrence of Arabia—with stars that epitomized Hollywood glamour.

It’s therefore fitting that the leading men in Once Upon a Time in Hollywood, Quentin Tarantino’s latest film about two men making their way around the hippy Hollywood scene of the ’60s, are two of the most recognizable faces in the industry today. Leonardo DiCaprio and Brad Pitt are veritable icons with decades-long careers. And while a Hollywood movie filled with tributes to Hollywood may seem meta or even self-serving, in the hands of Quentin Tarantino it’s a spectacle, managing to showcase both the enchantment and underlying darkness of 1969 Los Angeles.

Set exactly 50 years ago, the film features ’60s-inspired costumes designed by Arianne Phillips that are as sentimental as Tarantino’s homages to classic cinema. The story follows aging actor Rick Dalton (DiCaprio) and his stunt double Cliff Booth (Pitt) as they attempt to navigate the film industry. The two men boast bold looks, but each has a distinctive style.

Is your personal style more Pitt or DiCaprio? Take a look at these ensembles and affordable ways to replicate the fits below. 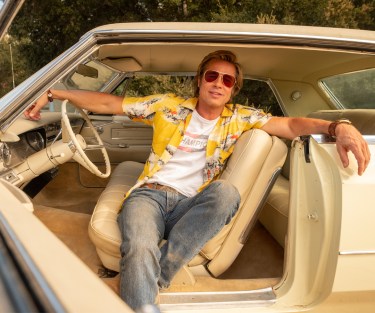 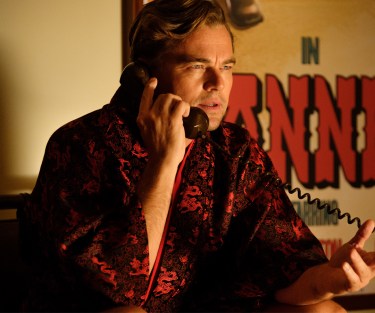 While not every ’60s man fully relished the age of flower power, hippie and bohemian influences greatly impacted the decade’s fashion trends. Rigid, formulaic fashion gave way to looser, more colorful pieces. Pitt and DiCaprio’s fits above demonstrate the funky fashion choices that the ’60s allowed, like DiCaprio’s bold Chinese dragon–print loungewear. Hawaiian shirts, like Pitt’s, have made a true resurgence in pop culture this summer. Pick a print and wear it proudly—the men of the ’60s would applaud you. 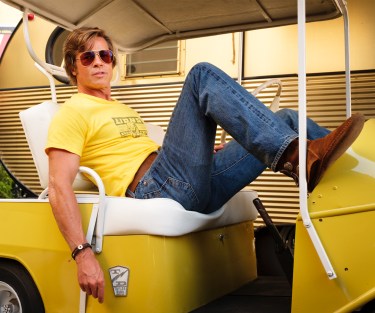 Pitt brings back the chukka boots style of the '60s. / Sony Pictures 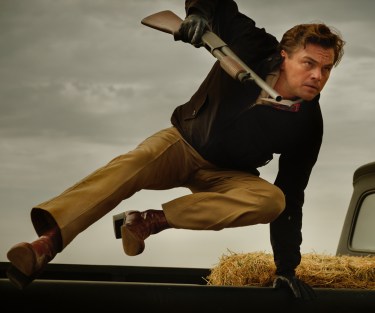 While perhaps not the most apropos shoes for the maneuver DiCaprio is attempting above, heeled boots gave men a lift in the ’60s. Platform boots were all the rage for men striving for a few extra inches. Suede and leather were just as popular in footwear as they were in outerwear, but casual shoes could be more relaxed. Like Pitt, many men opted for more easygoing moccasins or chukka boots. 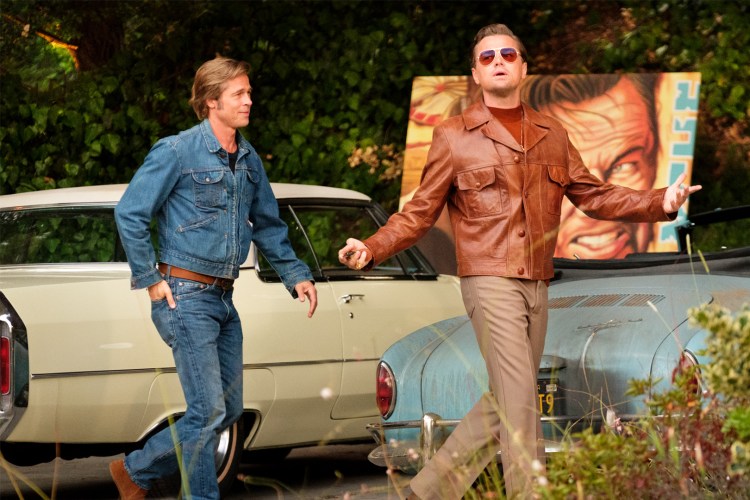 Denim and leather jackets may never go out of style. / Sony Pictures

Leather and denim just keep coming back, and we’re not mad about it. In the ’60s, denim-on-denim came about for the first time and blue jeans were “seen to represent freedom from more structured clothing.” Many denim fanatics would bedazzle their jeans, but Pitt’s look keeps it simple. DiCaprio dons a more dapper and polished fit, emblematic of the “formal mod look,” complete with a leather jacket.

Laid-back or Dressed Up? 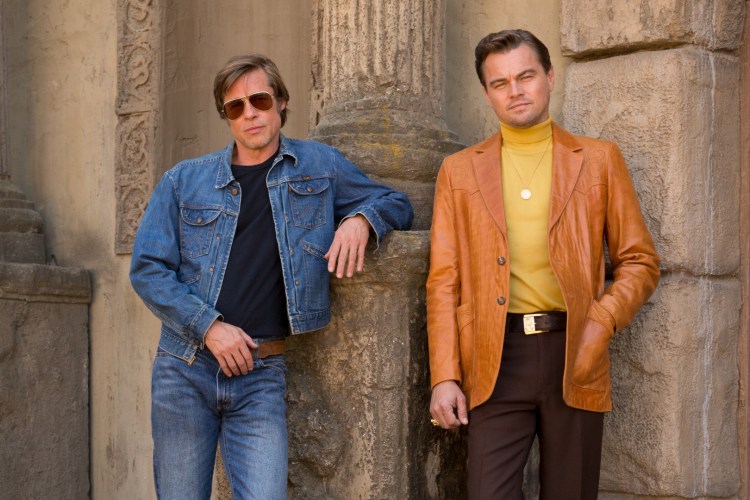 Pitt’s and DiCaprio’s ensembles speak to their characters’ inherent differences: One stays behind the scenes, while the other embraces that Hollywood elegance. Casual denim and a plain black tee give Pitt a palpable devil-may-care attitude. DiCaprio rocks high-fashion garb that is oh so ’60s. His look above demonstrates the mod fashion that “featured tailored suits but mixed things up with polo shirts and bright colors and patterns.” With a mustard turtleneck, DiCaprio may look more formal, but he certainly isn’t playing it safe.

Read Next: 10 Hawaiian Shirts to Help You Look Like Hopper from ‘Stranger Things’

Read Next: ‘Fear and Loathing in Las Vegas’ with Johnny Depp Is 2019’s Summer Style Inspo

Read Next: The Most Stylish Guys in Television History