The Most Valuable Bo Jackson Cards of All Time 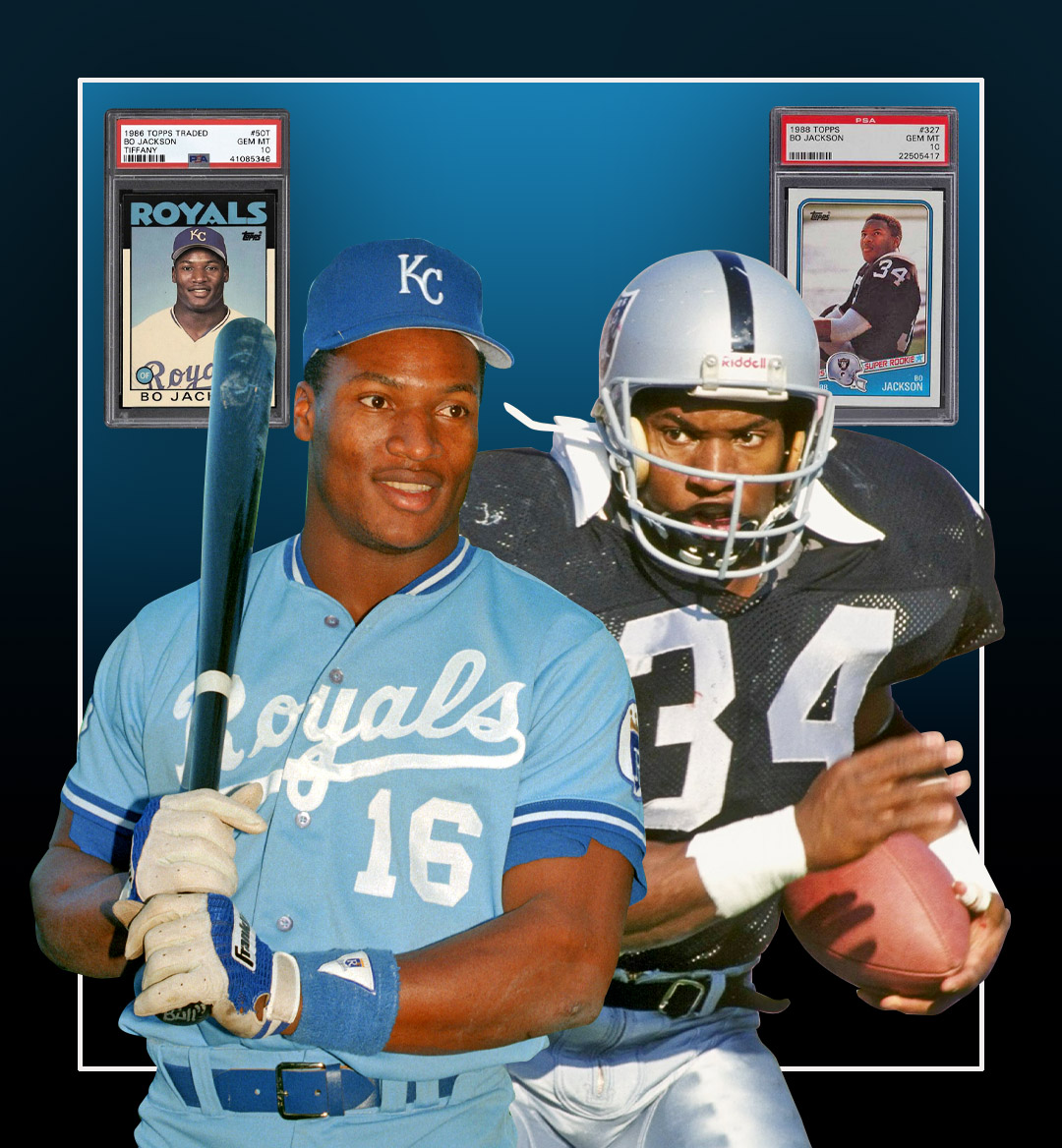 Before I talk about the most valuable Bo Jackson cards ever sold, let's first discuss the player.

In many ways, the world of sports resembles Greek mythology. We marvel at the heroic feats of our favorite athletes. An acrobatic dunk. A toe-dragging touchdown catch. A crack of the bat sending a ball 500 feet away. The list goes on and on like the legendary tales of Greek gods and goddesses. If sports really are the modern Greek mythology, then our Hercules is Bo Jackson.

Born Vincent Edward Jackson, “Bo” initially rose to stardom at the University of Auburn. The two-sport star won the coveted Heisman trophy as a running back in 1985. That same year, he batted an impressive .401 for the Tigers’ baseball squad. It is even rumored that he ran a 4.12 forty-yard dash during Auburn’s pro day.

Jackson’s professional career was also filled with jaw-dropping highlights. Fans vividly remember him scaling an outfield wall, trucking Brian Bosworth, and even breaking a bat over his helmet. With each game, it seemed as if Bo’s lore only increased.

Despite being a part of the junk wax era, Bo has remained one of the most collected athletes in The Hobby. It’s about time that we count off the 10 biggest Bo Jackson trading card sales of all time. To keep the list fresh, we are only allowing an individual card to appear once.

Let’s dive right in – here are the most valuable Bo Jackson cards of all-time! 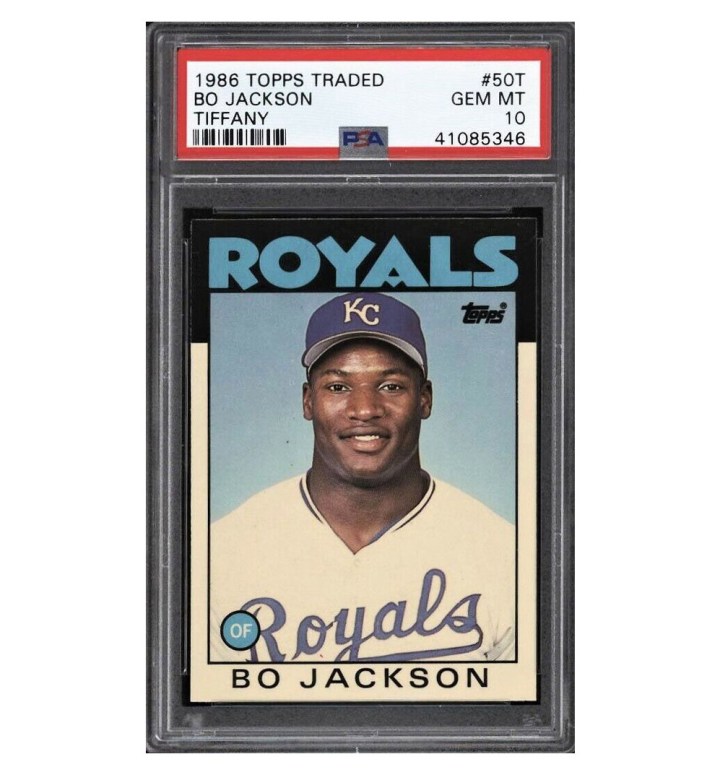 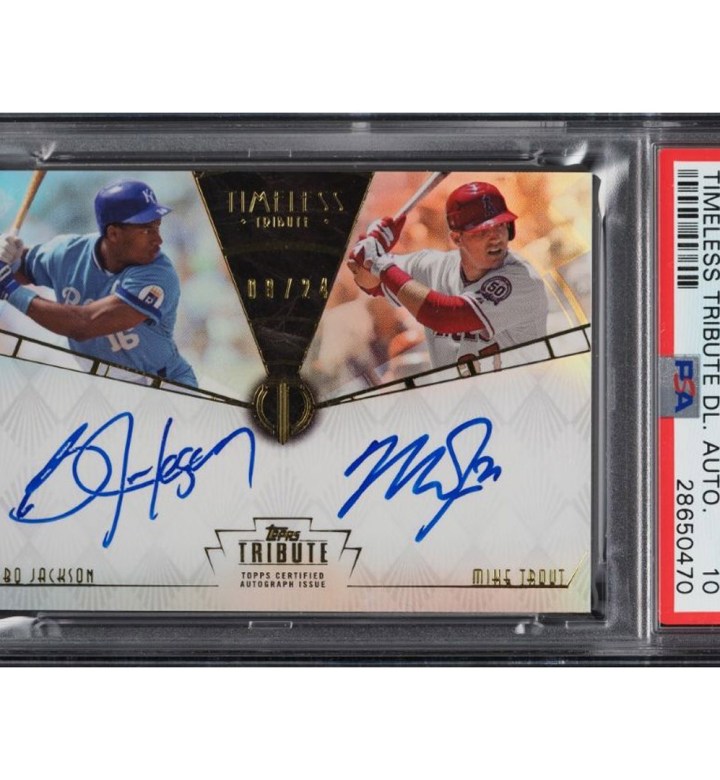 Our next card features Bo with a very familiar face. Jackson and Mike Trout may be the two most collected outfielders of their generation, and both are exceptional athletes. Typically, Bo is paired with his era’s players on dual-autographed cards, so it is neat to see one where he’s next to a modern superstar. The PSA 10 grade is also a major plus for this thicker card, so this one is an all-around banger. 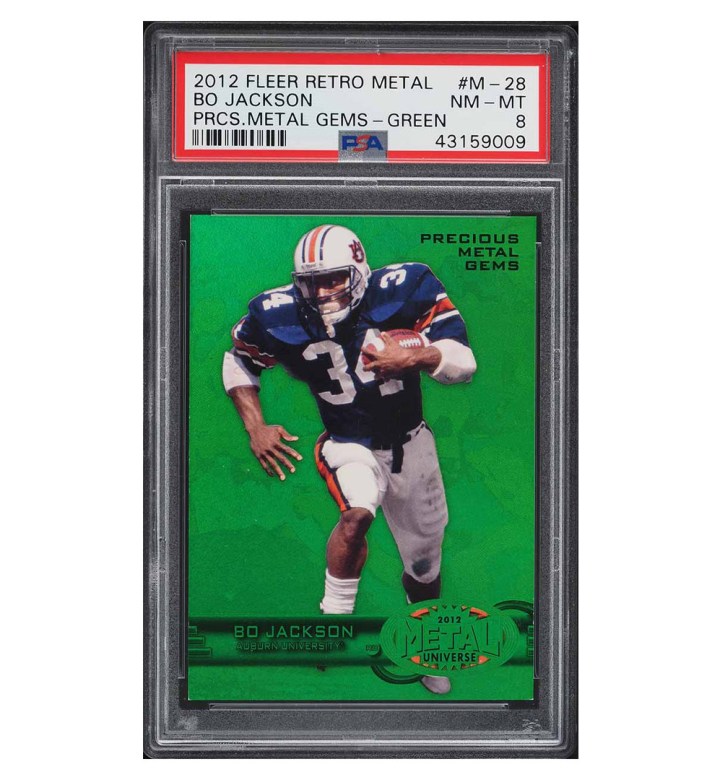 Since its inception, the Precious Metal Gems (PMG) insert has been a favorite of many modern basketball and football collectors. While Mr. Jackson doesn’t have any PMGs from his playing days, he did appear in the 2012 Fleer Retro Collegiate set. This card, which shows #34 in his Auburn uniform, sold for over $6,000 in May. 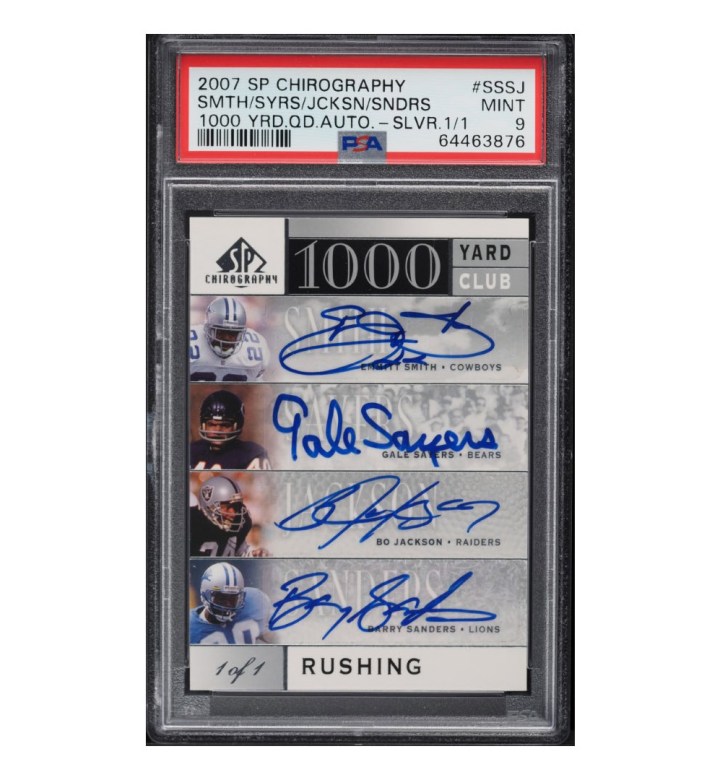 Is there a single card with more broken tackles on it than this one? This stunner from 2007 SP Chirography showcases four masters of the backfield; all of them provide an on-card signature on this 1/1 copy. Bo is the only player on this card that’s not in the Hall of Fame. We’ll let you decide if he would be in Canton had he finished a full career in the NFL. 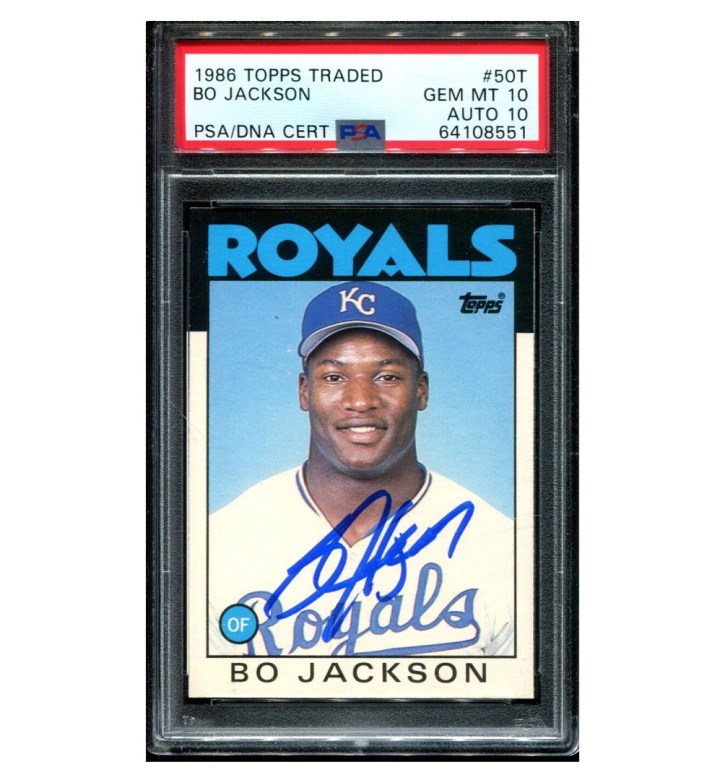 Pack-issued autographs were not yet in circulation during Bo’s early years. So, seeing his Topps Traded rookie with a sweet signature is super neat. When paired with a perfect PSA 10/AUTO 10 grade, you have a grail card for any Bo Jackson collector. While this 10 sold for over $3,500, a PSA 9/AUTO 10 can be picked up in the $500-700 range. 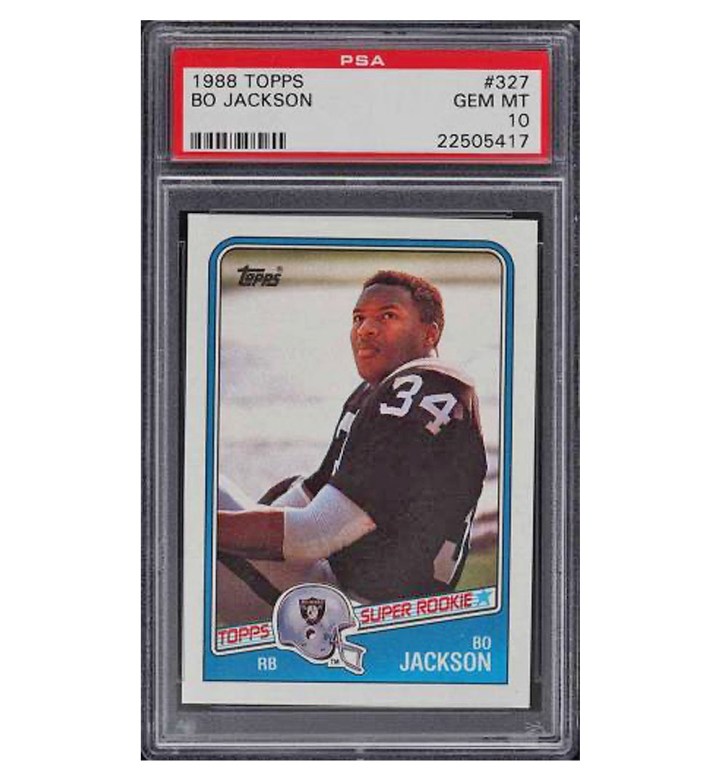 This one is another 80s card that was hard to obtain a PSA 10 grade. Even still, Bo’s Topps Football rookie has a population of 556, which is drastically higher than his Tiffany RC.

Jackson was famously drafted first overall by the Tampa Bay Buccaneers in 1986, but he elected to begin his professional career in the MLB. Two years later, the L.A. Raiders drafted him in the seventh round, and the rest is history. 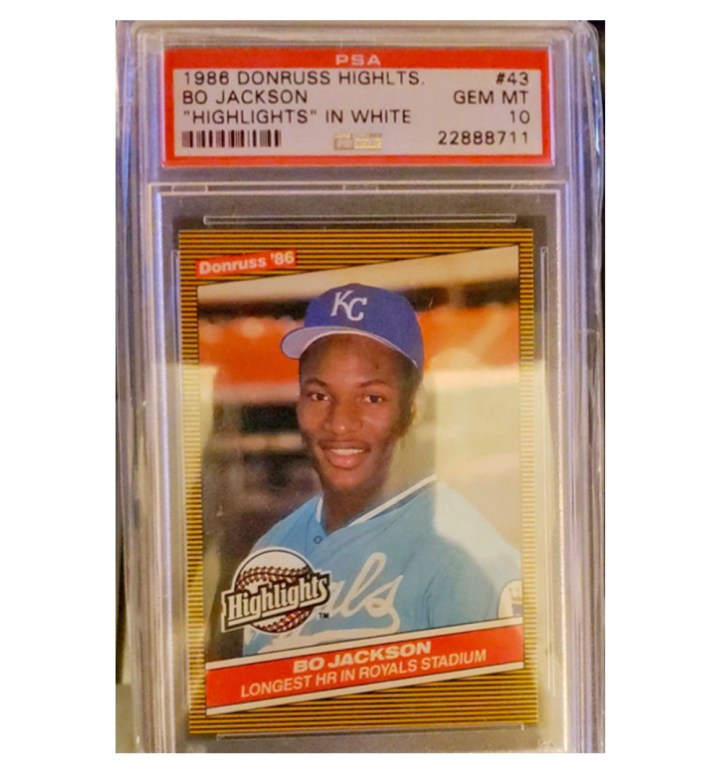 Number seven is a misprinted card that seldomly surfaces. This 1986 Donruss is one of Bo’s earliest cards, and it notes one of his early homers in Royals Stadium. This copy is special because the “Highlights” icon is printed in white instead of yellow; in fact, the card is only a POP 6 as a PSA 10, marking a huge rarity from the junk wax era. 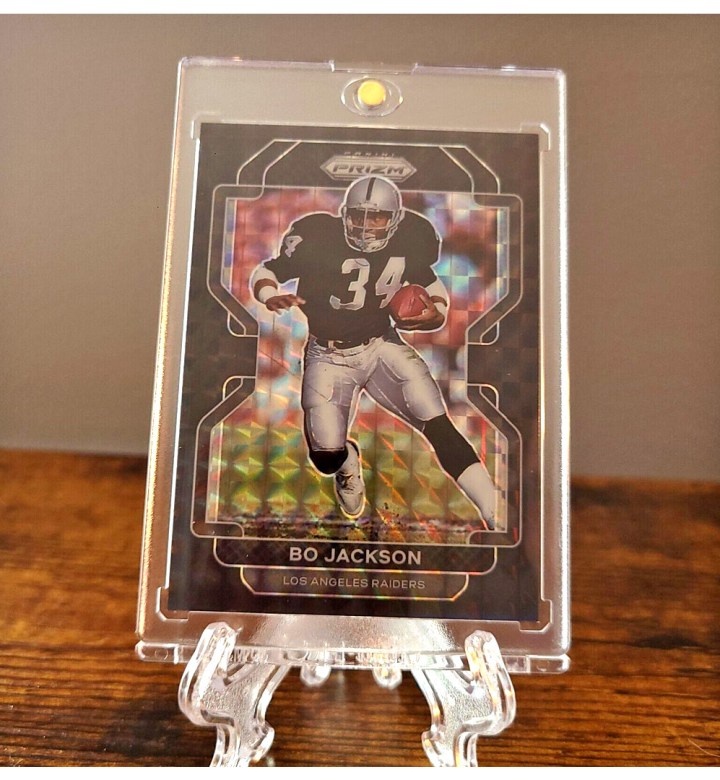 This card makes us wonder how the hobby would react if Bo was a rookie today. He also has a card in the 2019 and 2020 Prizm set, but the 1/1s have not surfaced. The Black Finite parallel perfectly contrasts with the iconic Raiders’ black and silver, so this one is a great addition to any Bo Jackson collection. 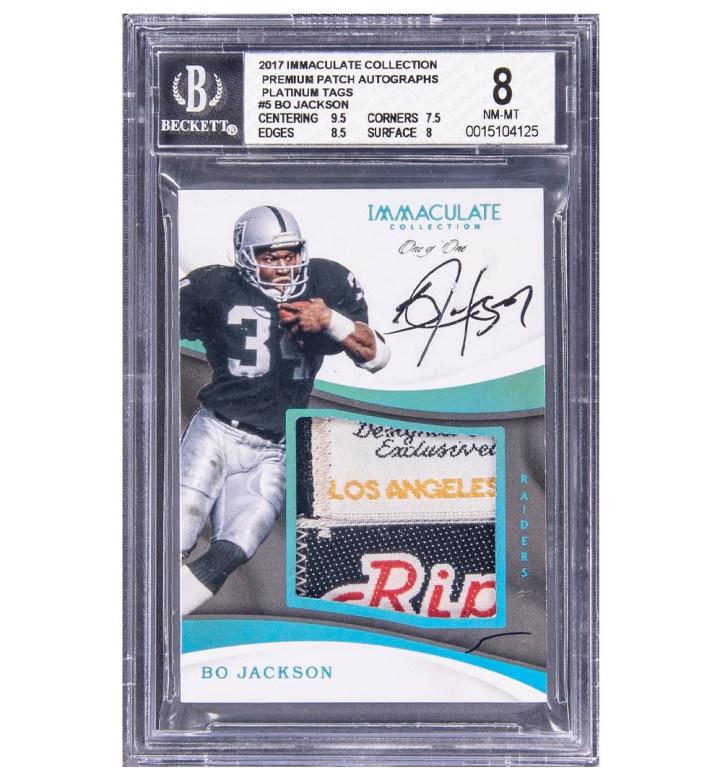 This Immaculate patch autograph is one of the few we’ve seen with a game-worn piece of memorabilia. It’s also a prime example of buying the card and not the grade. This 1/1 last sold for $2,000 in a November 2022 Goldin Auction. 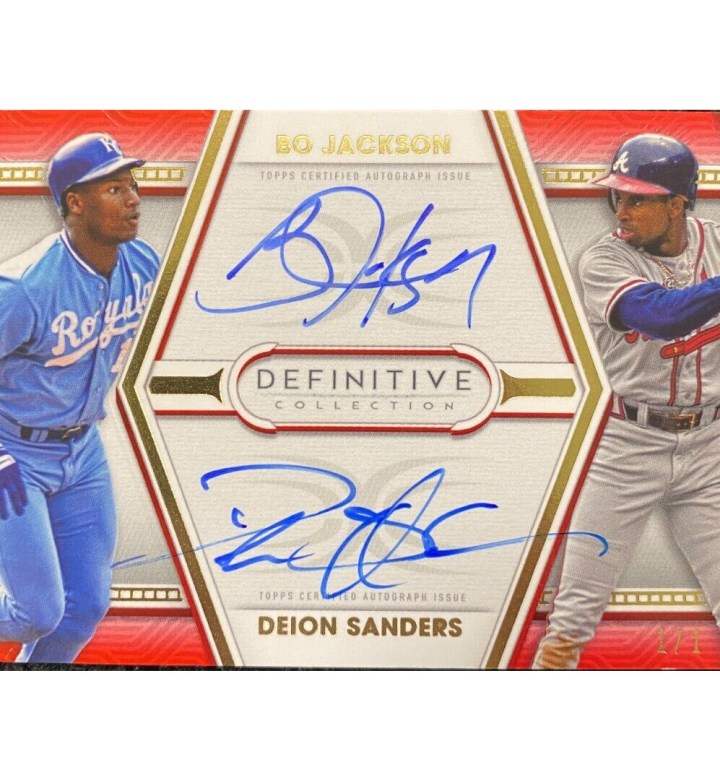 The pinnacle of athletic ability resides on this card. Fans can go back and forth on who was the better athlete, but one thing is for certain: we may never see two-sport dominance like this ever again. In recent years, players like Kyler Murray and Russell Wilson have competed in both football and baseball, but neither has taken it to the level that Bo and Deion did. What a tremendous dual autograph.

Which of these most valuable Bo Jackson cards is your favorite? Do you own any of them? Let us know @CardTalkPod on Instagram and Twitter.