'One Piece' TCG: The Ultimate Guide 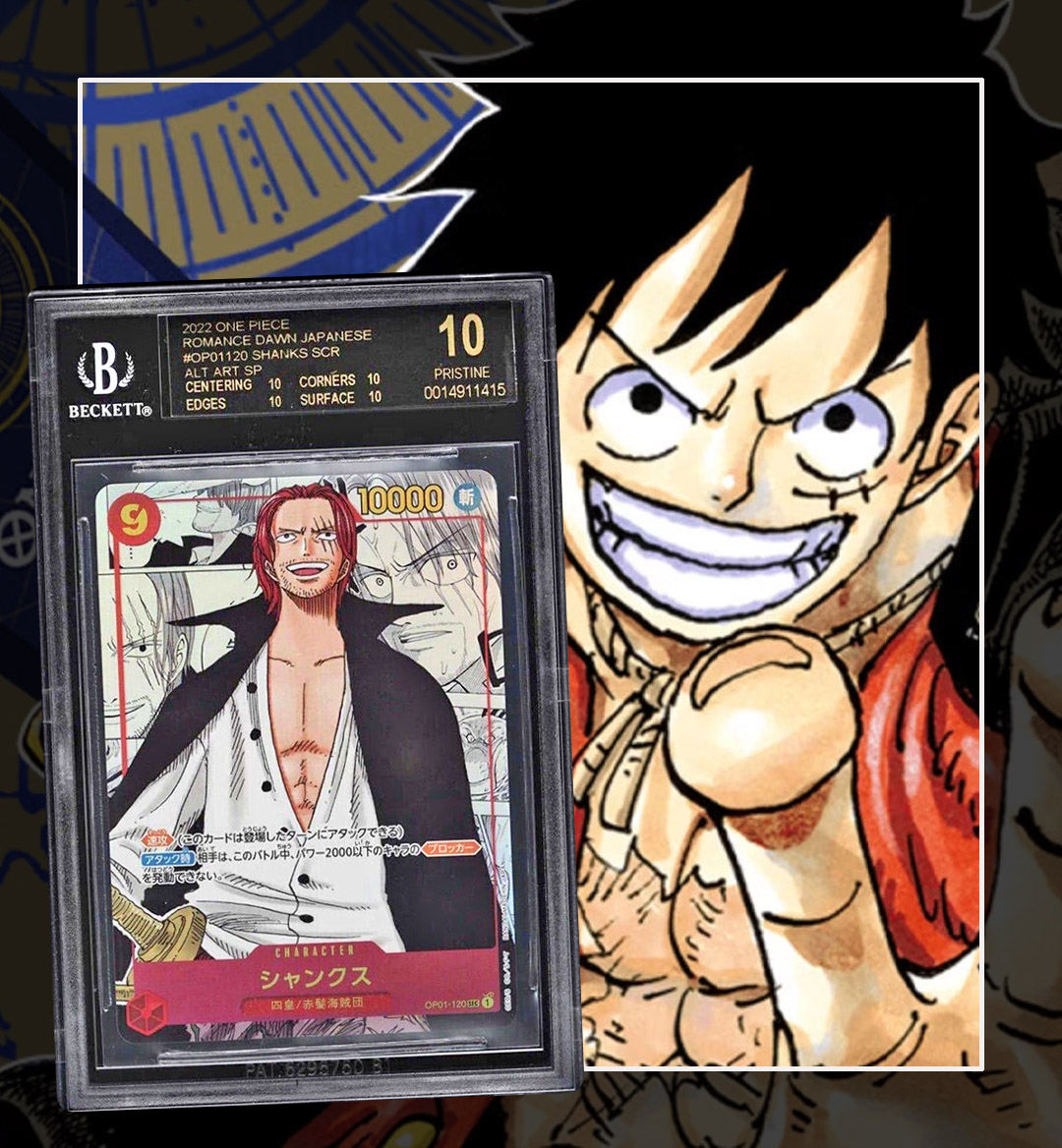 Have you heard about the new One Piece TCG and are looking to get educated? We have you covered! The first thing you need to know is...

The One Piece fandom is real.

Related: The 27 Most Powerful Anime Characters of All Time, Ranked

One Piece is a manga and television series comprised of over 100 volumes and 1,000 TV episodes. Creator Eiichiro Oda has built an animated universe with beloved characters and artwork. And now, the worldwide fandom of the show can extend into the One Piece trading card game.

One Piece’s TCG works like most others: there are character, stage, and event cards equipped with special perks. Additionally, the game contains a leader card, which is the centerpiece of the deck. Players can also utilize “Don!!” cards to pay the cost of implementing leader cards or to boost a card’s ability.

So far, Bandai has released one booster product called “Romance Dawn” as well as four starter deck boxes. With a limited production run and few in circulation, these cards are some of the most sought-after TCGs currently.

Today, we are going to break down the 10 highest sales for this hit manga. For the purpose of this list, we are only allowing each card to appear once. Let’s dive right in and highlight the best cards of the One Piece TCG! 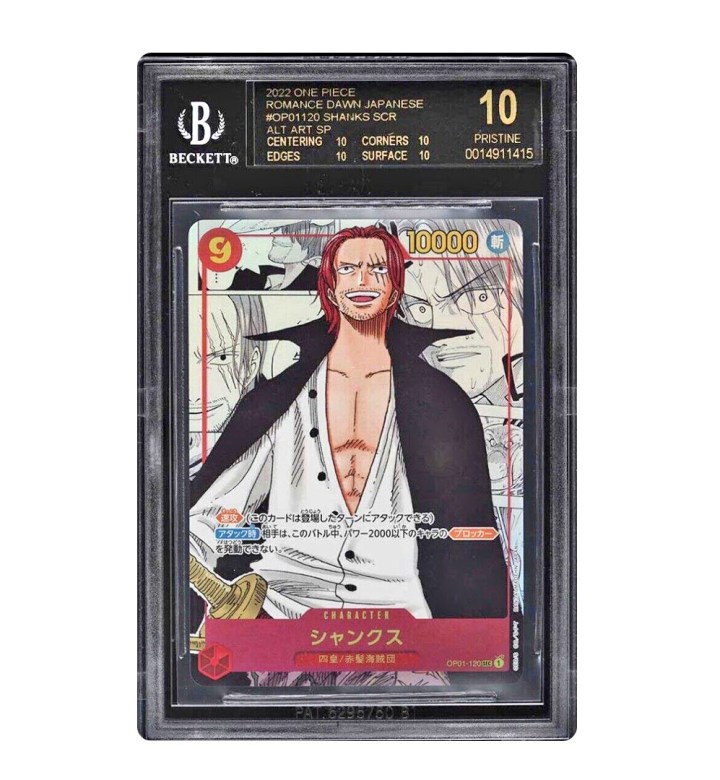 Shanks is an important and pivotal character in the One Piece franchise. He is one of the 30 character cards in the "Romance Dawn" booster set and one of four to have a variation. The alternate art shown above, commonly known as the “Manga Shanks,” is the most valuable of the entire product.

Whether it’s sports cards or TCGs, condition is key. Grading is a quintessential facet of the hobby, and no grade is more heralded than the BGS 10 Black Label. Couple that with the rarity of the “Manga Shanks,” and you can understand how it reached a sale price of $13,000. 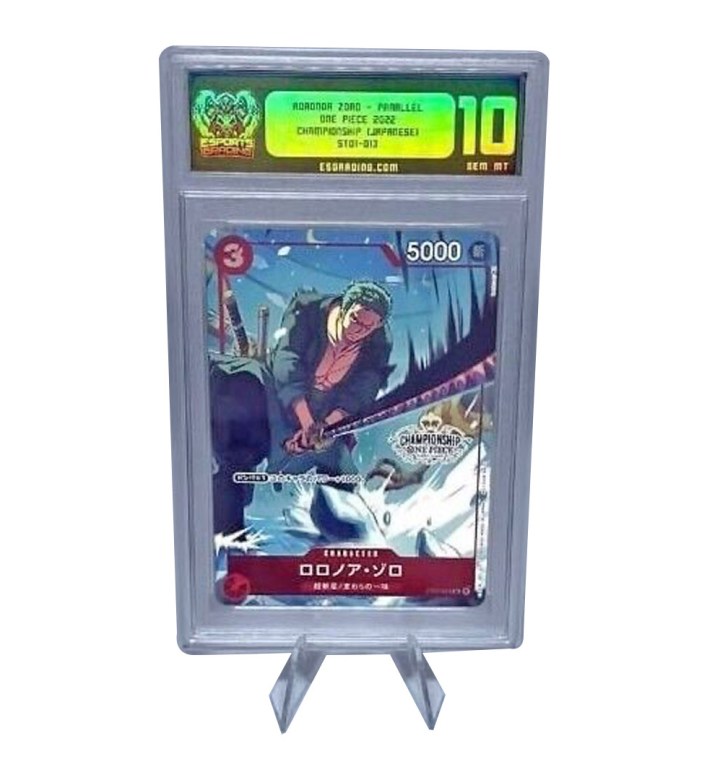 Next, we have the sword-wielding Roronoa Zero, an essential member of Monkey D. Luffy’s crew. This particular full art card stems from a Japanese championship promo set, which makes them extremely limited in production. This card was slabbed by Esports Grading, a Singapore-based grading group. It received a perfect gem mint 10 and sold for over $12,000 in October 2022. 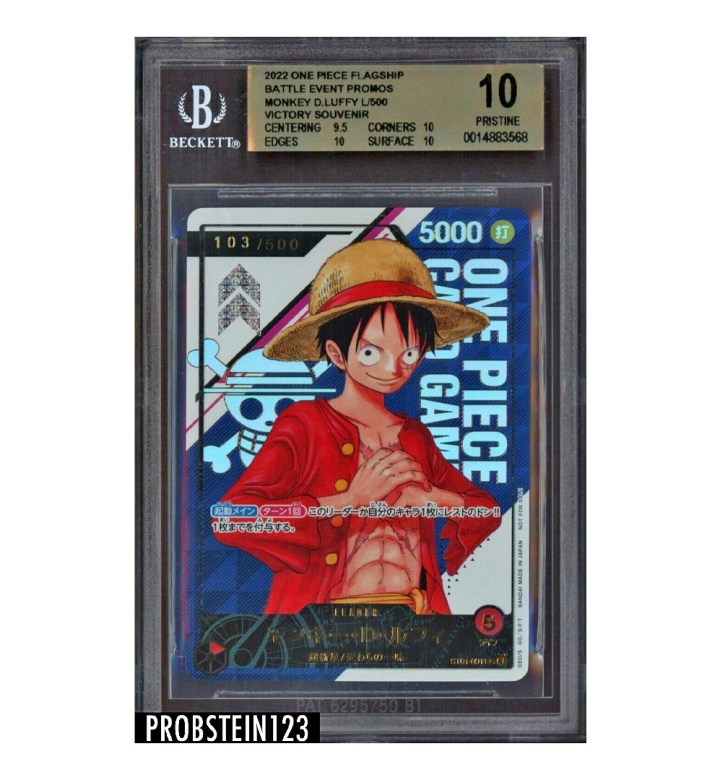 This card, which features the first appearance of the beloved Monkey D. Luffy, was distributed to the victors of a recent flagship tournament. Limited to only 500 copies, this promo is one of the rarer cards on this list. Given how recently these sets were released, this is one that we can see holding its value well over time. International markets have not had much time to set and scale the One Piece TCG, so it will be interesting to see how it grows in the next year. 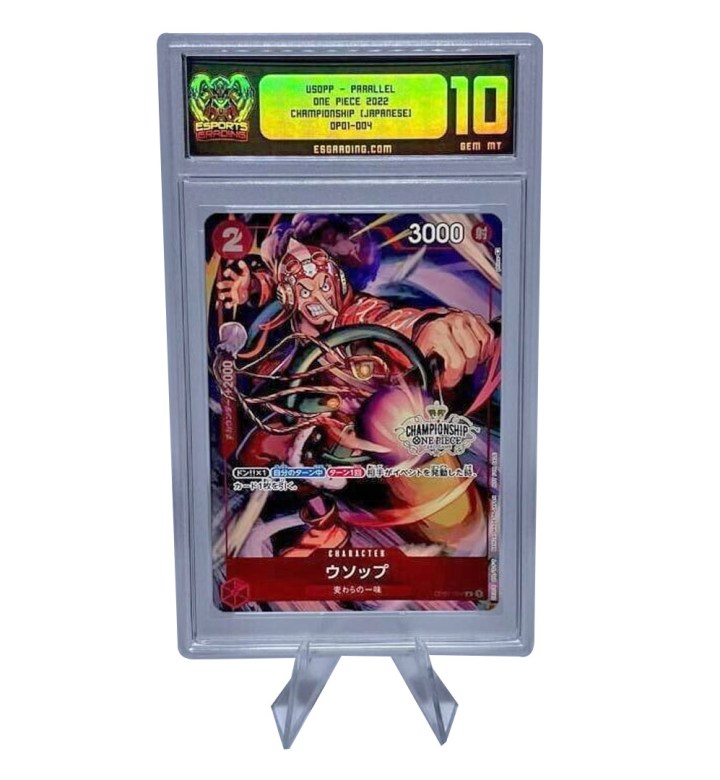 Here is another promo that hasn’t even hit the States. Usopp, dubbed “The King of Snipers” by fans, is another unforgettable character in the One Piece universe. The card above also received a coveted ESG 10 grade, which helped it reach its final sale price of $5,100. 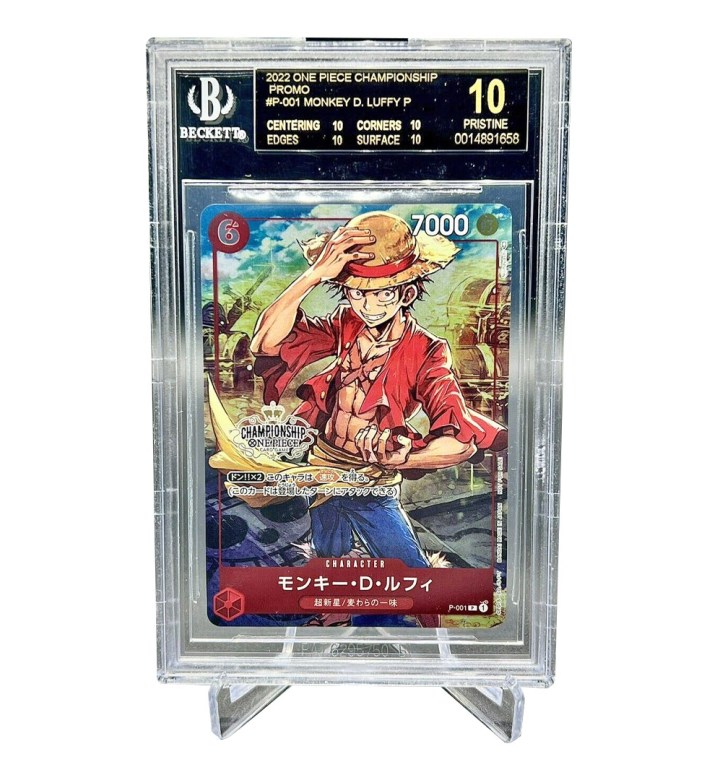 The Luffy card featured above is one of several promotional variants from the 2022 championship events. Based on the current market, the #001 copy holds the highest value. It features impeccable full artwork of Luffy, and it sold for nearly $5,000 in 2022. 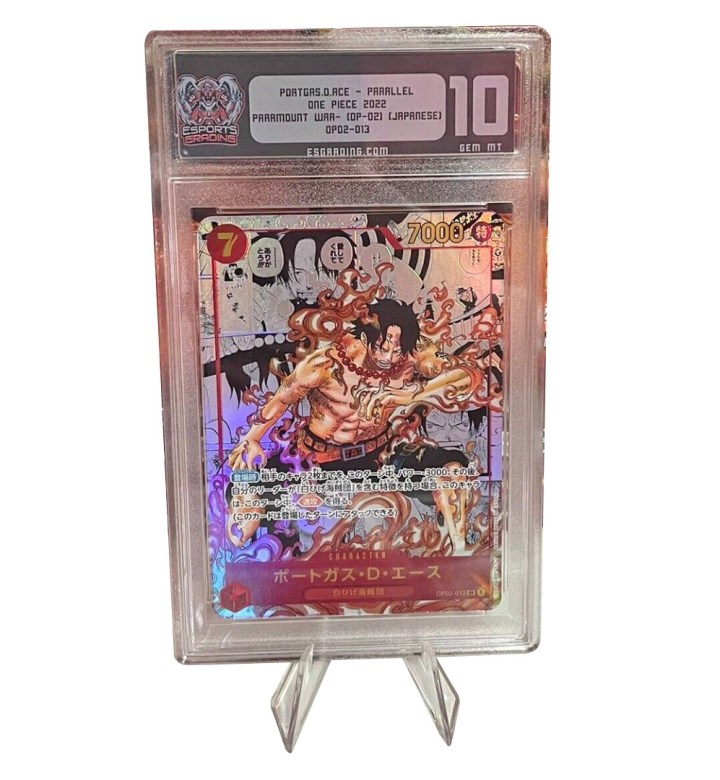 This card of Portgas D. Ace has a similar design and eye appeal to the Manga Shanks, as they were both alternate arts in the Romance Dawn release. The stunning drawings give collectors an idea of Ace’s character before they even delve into the series, which is a testament to the One Piece TCG as a whole. 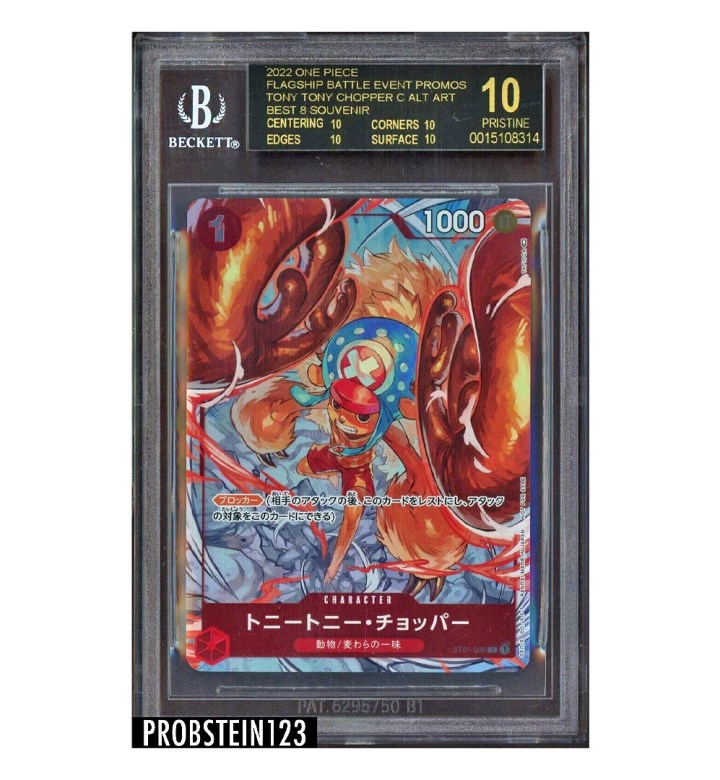 Just like the Monkey D. Luffy card at #3, this Tony Tony Chopper copy was also handed out as a souvenir at the flagship battle event. If competitors reached the best of eight in their competitions, they were rewarded with this promo. While the exact print run is unknown, it is most likely in the same range as the Luffy from earlier (~500). 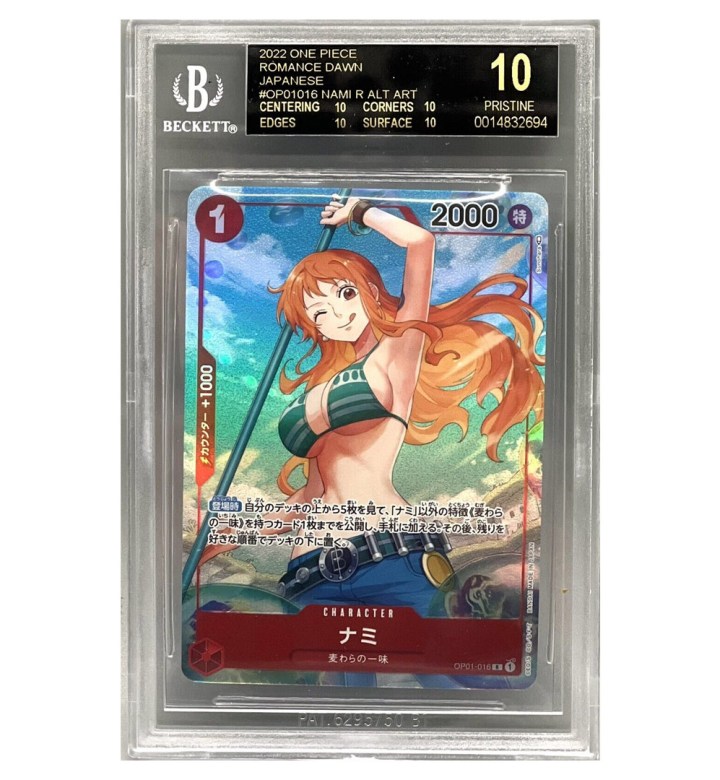 At number eight, we have the first appearance from Nami, another cherished character in the series. Nami only has two cards in the Romance Dawn set, a base copy, and this alternate art. The gem above graded as a BGS Black Label and sold for over $2,400 in September 2022. 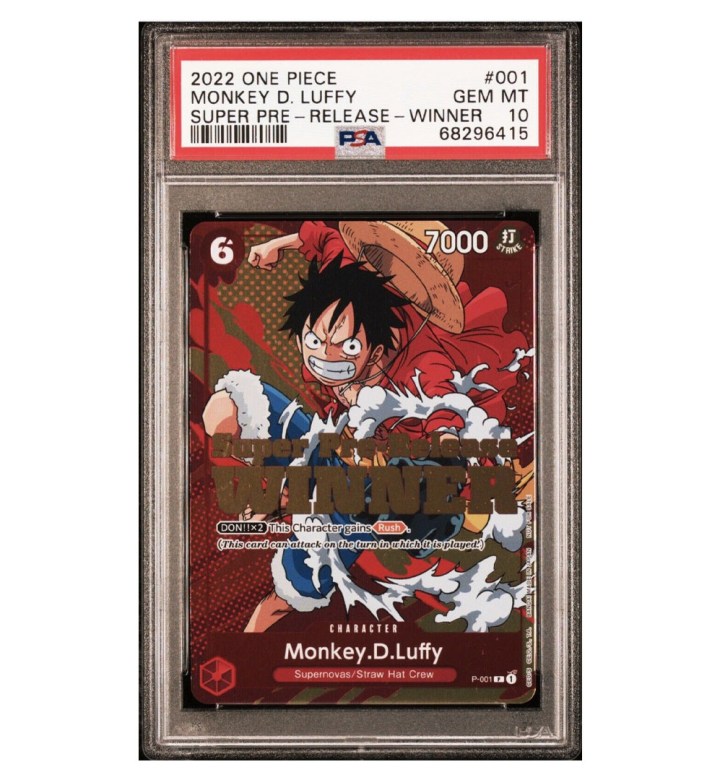 This card also stems from a promotional 4-card pack where lucky winners received a Luffy pre-release card. Some of the early pulls were quickly sent to PSA, and they have sold as high as $2,000 earlier this year. It is doubtful that Bandai will re-release these promo packs, so it will be interesting where the market will sit for this card. 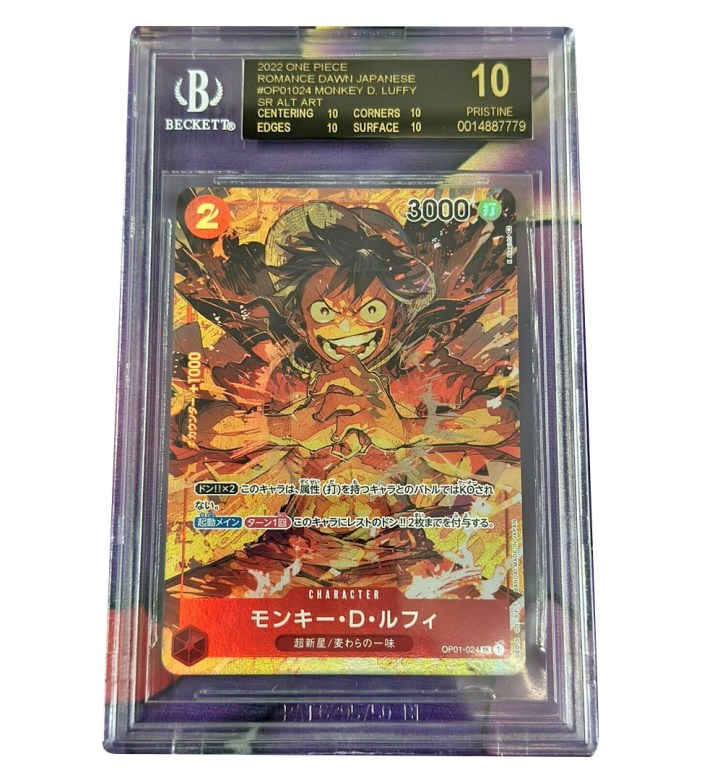 Finally, we have Luffy’s Japanese alternate art from Romance Dawn. It is rumored that the Manga Shanks has a pull rate of one in six cases, so this card is likely on a similar rate. This BGS 10 sold as high as $1,625, marking another solid sale for the One Piece protagonist.

Will you be picking up any One Piece TCG cards? Let us know @CardTalkPod on Instagram and Twitter!