"The Book of Boba Fett" Recap: 'Stranger in a Strange Land' 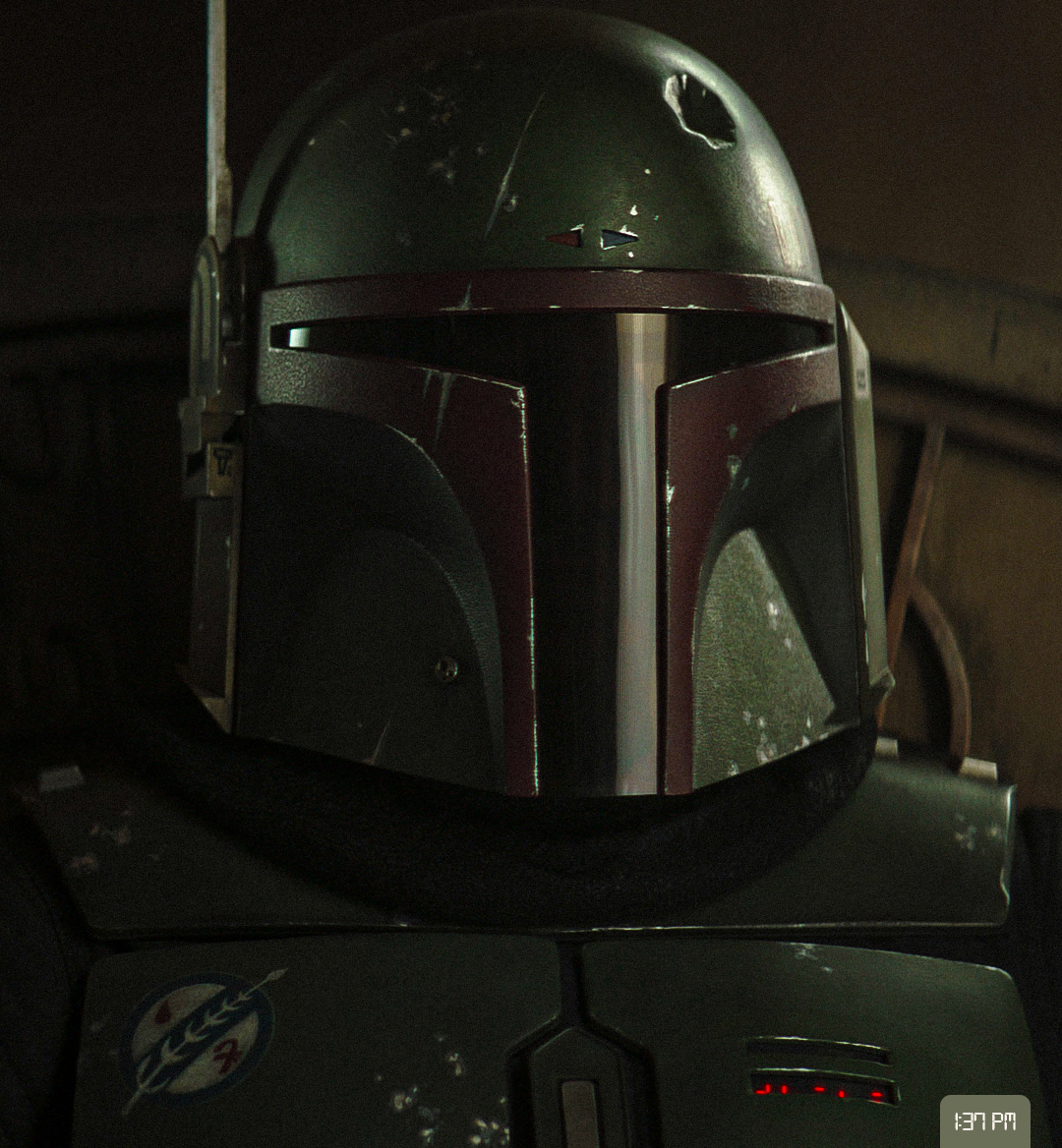 Everything looks familiar in the halls of Jabba’s Palace, though it seems out of place given that it's completely empty, save for the giant incubator that’s holding Boba Fett. Our first glimpse of Fett comes through a pane of glass and a few feet of water in a medical pod as Fett heals from...something.

Inside the pod, he's having a dream-like flashback, which brings him both back to Kamino and to picking up his father’s helmet on Geonosis. Suddenly, Fett is inside the Sarlacc, where he finds himself staring at a dead stormtrooper. He tries to figure his way out of the Sarlacc’s intestines, but first, he rips out the stormtrooper’s oxygen tube and uses it for himself. Taking his flamethrower to the Sarlacc’s insides, Fett is able to claw his way out, as we see his fist finally come through the sand on the other side of the Sarlacc pit.

Covered in sand, he makes it out alive and is finally able to rest on the outskirts of the pit. After resting for what we assume is many hours, a pack of Jawas finds him face-down and quickly strips him of his gear. Later on, Tusken raiders find and cure him with a weird carrot-like thing before taking him away.

He’s tied up, beaten, and dragged to their camp, where he wakes up later, tied again to a post with a Rodian bounty hunter in the same situation just a few feet from him. An alligator-like creature that’s serving as a watchdog keeps an eye on both of them.

Fett tries to break out, which catches the attention of the watchdog, who proceeds to attack him, though he's able to knock the creature out for the time being. Fett then breaks out of his ropes and runs away with a pack of Tusken Raiders following, along with the watchdog that has now woken up. After a stand-off with one of the raiders, Fett is brought back to the camp.

Suddenly we're brought back to the present day, where his partner, Fennec Shand, is waking him up from outside of the medical pod. After drying off, Fett assumes his seat at Jabba's Throne, where he and Shand wait for visitors to come by and pay their respects with different gifts.

Visitors include Fett's previous boss, Dokk Strassi, a representative from the Mayor, and a pair of Gamorreans who had previously been loyal to both Jabba and Bib Fortuna. Though skeptical of them at first, he takes them on as guards as they assured him of their loyalty.

Fett and Shand then head over to the heart of Mos Espa with the Gamorreans where they hit up the local cantina, The Sanctuary, to speak with the establishment's owner, Garsa Fwip, about Fett's new position in the city. This is all part of an effort to get the people in town to respect him instead of fearing him.

While on their way to another destination in the city, the two are surrounded by a group of ninja-like assassins with orange shields and electric staffs. Though Fett and Shand are tough, they're unable to defeat all of the assassins until the two Gamorreans jump into action and save them.

Although Fett manages to kill one of them with a rocket, two assassins get away, with Shand taking off and running over rooftops to catch them. She ends up pushing one off a roof but is able to corner the final assassin and take him alive.

Back at Jabba's Palace, the Gamorreans load Fett back into the medical pod as he was pretty beaten up and out of breath following the assassin run-in. With that, he's brought back to his dream-like state and the flashback from before picks up where it left off.

In his dream, Fett and the Rodian are instructed by the Tusken Raiders to find shells of water in a remote area of Tatooine. While digging in the sand, the Rodian encounters something much larger and fossil-like, but upon further investigation, it turns out to be a massive four-handed, centaur-like animal with the face of something slightly resembling the creature from the black lagoon. Oh, and it's pretty angry, too.

The other prisoner who discovered it was almost immediately killed, though Fett was able to finally take out the creature just as it was about to kill the supervising Tusken Raider. He also killed the monster by choking it with a chain, similar to the way Princess Leia killed Jabba in Return of the Jedi.

It seems that this method of killing aliens is all too common on the sands of Tattoine.

Given Fett's heroic action, it seems like he was released from his imprisonment, as the main Tusken Raider handed him a bowl of water at the end of the episode.

So—although we're still missing a few pieces about how Fett got to exactly where he is now at Jabba's throne—the first episode did an outstanding job of setting the general state of things. It's a bit unsettling to be seeing so much of Fett's actual face when he has remained a faceless mask in our heads for so many years, but it accomplishes the necessary goal of putting a face to a name.

He believes that a leader should show his face around town, and he meant that literally.