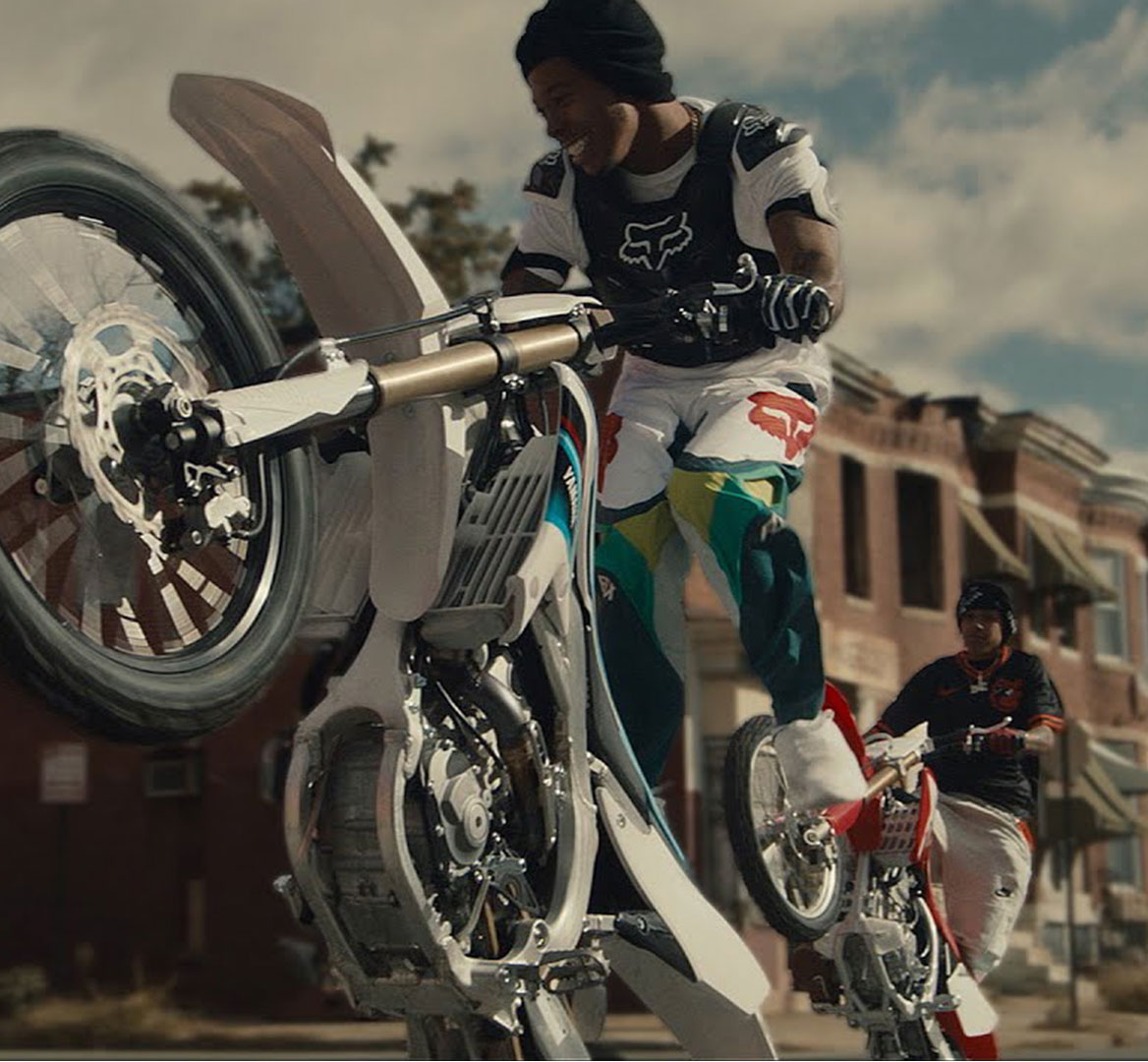 Directed by Angel Manuel Soto and inspired by a story from Oscar-winner Barry Jenkins, Kirk Sullivan and Christopher M. Boyd, Charm City Kings is a coming of age film centered on precocious 14-year-old Mouse, played impressively by Queen & Slim’s Jahi Di'Allo Winston, a young Black kid living in Baltimore in a single-parent home with ambitions of joining the notorious Midnight Clique bike gang. In the course of 125 minutes, Mouse loses a friend to gun violence, watches a friend nearly beat a man to death, gets kicked out of his house, and plots an armed robbery all in the pursuit of maturity that he soon comes to learn is a crippling burden.

The film also marks rapper Meek Mill’s acting debut as reformed ex-convict Blax who takes Mouse under his wing after he loses his older brother. The film is scheduled for release April 10, but ONE37pm attended an advance screening to see how the coming of age story of Black boys in the ghetto is being told in 2020.

Charm City Kings employs a lot of the typical tropes of coming of age stories— a precocious protagonist with youthful aspirations of an epic summer and riding bikes throughout the streets of his hometown. Mouse, Lamont, and Sweartagawd (Kezii Curtis) try to court the new girl on the block and sneak out of their homes to watch people perform bike tricks in the street and try some out themselves. It’s this framework of normal teenage exploits that make the turmoil they must endure to sustain it all the heartbreaking.

Fathers are conspicuously absent in the film and there’s no real diversity of occupations. Outside of Detective Rivers (William Catlett), a police officer, and Meek Mill’s character Blax, a mechanic, the only signs of manhood these three young men see on a constant basis are the unruly Midnight Clique who ride through Baltimore with ostensible immunity, starting street chases with police officers for thrills and using dating apps to coordinate an illegal enterprise. Coming of age as a Black boy in a place like Baltimore where more than a third of children live below the poverty line sometimes means your role models are the ones making money the quickest because rent bills don’t wait for 401k plan residuals.

Mouse is wise beyond his years, an aspiring veterinarian able to deliver a kitten in his bathroom and recite random animal facts that amaze adults twice his age. Yet, coming of age in the ‘hood often means existing in a volatile purgatory between adulthood and childhood, swinging between both extremes trying to get a handle on each to bring them together. The child in Mouse saw the eviction notices his single mother was piling up and instinctively wanted to help. The man being forced out of him by his reality ironically gets him removed from the same house he was trying to save by the same mother he was trying to help. It’s painful ironies such as these that Black families have dealt with for decades.

The intense argument between Mouse and his mother which led to Mouse’s removal is a harrowing highlight of Charm City Kings that perfectly exemplifies the complications of a child growing into manhood. In front of camera angles tight enough for the nuances to tell the story under the pain Mouse’s mother, played with warm yet firm authority by If Beale Street Could Talk actress Teyonah Parris, berates him for hiding a large sum of money he amassed by seemingly partaking in the same illegal activity that led to his older brother’s death. You can see her eyes drowning in a wave of tears as she looks at her teenage child assert his newfound manhood with a mix of contempt and fear.

She pushes her son out the nest into the same streets she fears will swallow him whole because she can’t bear to see him come of age by risking his life. Honestly, if Winston wasn’t the lead actor, it's tough to say whether the core message of this film would hit as hard. The sixteen-year-old actor makes you believe every word he says and can go from the ferocity of an aspiring gang member to the ebullient softness of a goofy teenager without losing any believability. 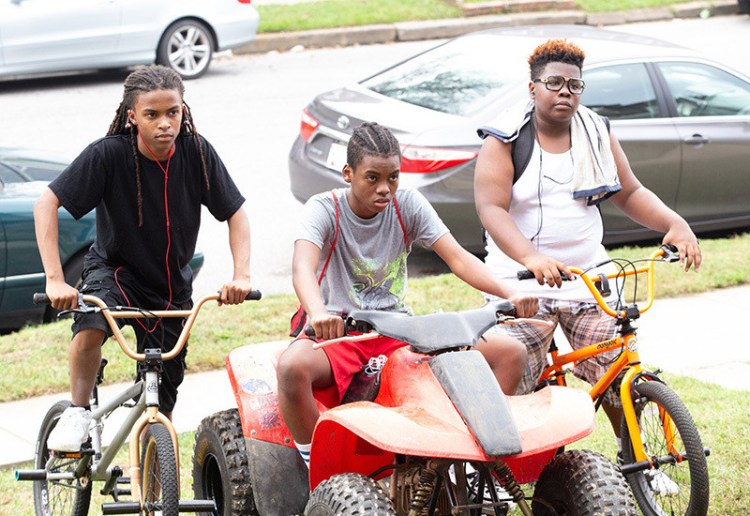 It’s apparent from the first few minutes of Charm City Kings that Meek Mill was cast for his life experiences and not his acting abilities. The film starts with a camera phone-quality video of young Black men with freedom and the wind in their faces as they perform acrobatics on dirt bikes. At the end of the sequence, the camera turns around and we discover it's Meek’s character Blax filming the entire time and it would take even the most casual Meek Mill fan a few seconds to realize this footage wasn’t culled from Meek’s personal collection of bike videos he’s spread across social media over the years.

As an ex-con, Blax tries to impart wisdom on the youth like Mouse while still riding through the city in dirt bikes and showing no respect for law enforcement. That’s almost identical to Meek, who is an ex-con, was arrested and placed in prison in 2017 for violating his parole by riding dirt bikes in New York City streets and has been helping with prison reform since his release. Meek is essentially playing himself, a fact that complicates the viewing of Charm City Kings, but doesn’t preclude enjoyment or immersion.

Meek has often been criticized as a rapper with exclamation marks for vocal cords. Those critics will be surprised by his somewhat demure behavior as a mechanic trying to earn an honest living. Every single emotion Blax exhibits on-screen is conveyed mostly in a handful of facial expressions that all look indiscernible. Some may see Meek’s lack of emotional range as an authentic look at recovering gang members numbed by post-traumatic stress disorder, prison time, and survivor’s guilt masking it all in unwavering stoicism. Others will see Meek’s ostensible lack of emotional depth to a rapper without the acting prowess to tap into a character, instead opting to just act as themselves, which the character closely mirrors. No matter what, it’s clear Meek may be best at playing Meek on-screen, which is somewhat appropriate for this coming of age story.

Meek is by no means the focal point of the film, but he’s inextricable of some of Charm City’s most meaningful messages. Meek’s voice doesn’t raise that much when he tells a member of the Midnight Clique not to give Mouse a gun after the trio of friends asks for one. But, his eyes soften and his stoicism looked like stunned paralysis when one of the Midnight Clique members reminds Blax that the reformed gangster once gave him a gun at a similar age. Blax has to struggle with the guilt of contributing to the vicious cycle of gun violence he’s trying to, guilt of still being alive when his comrades from his times of illegality are gone, and guilt of knowing he stunted the development of a few Black boys—a realization that’s the impetus of his decision to make the most shocking sacrifice of the entire film. 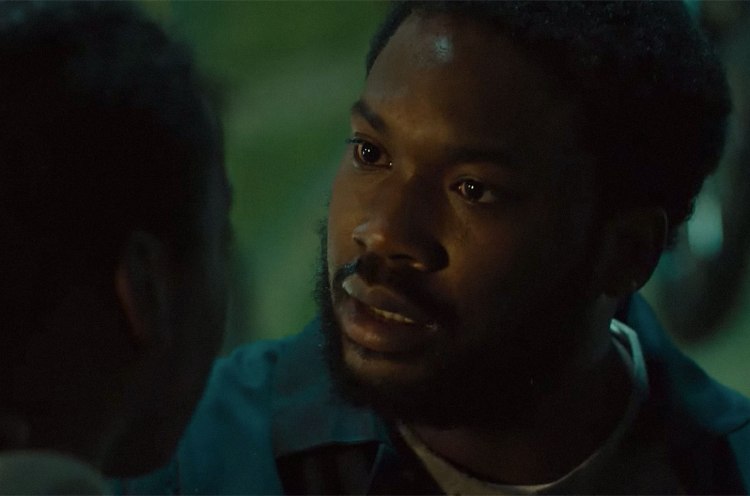 Coming of Age, Ending of Life

Mouse is the center of the film’s narration, but it’s Lamont (Donielle T. Hansley Jr.) that demonstrates this in gruesome detail. Hansley Jr plays the young man with the quiet ferocity of someone who’s seen too much bad to not believe the only good in the world comes from the bad. He pummeled a man who pulled a gun on him thinking Lamont’s young age would preclude any sort of physical retaliation worth defending against. Each time he pounded that man’s flesh in front of the Midnight Clique he aspired to join to establish his manhood, he was beating the child out of himself at the same time.

A climactic death sends the friends on separate paths towards their own respective manhood. One of the last scenes sees the two of them running into each other. One of them wearing veterinarian scrubs and the other waiting on the next drug pickup order. Both faces are painted with sullen grief. To come of age as a Black boy is to come to understand your closest friends never will, either due to death or their own decisions.

Coming of age often means killing the child in you. Charm City Kings is a riveting story on the death of Black boys, the birth of Black men and the costs to get to that point.