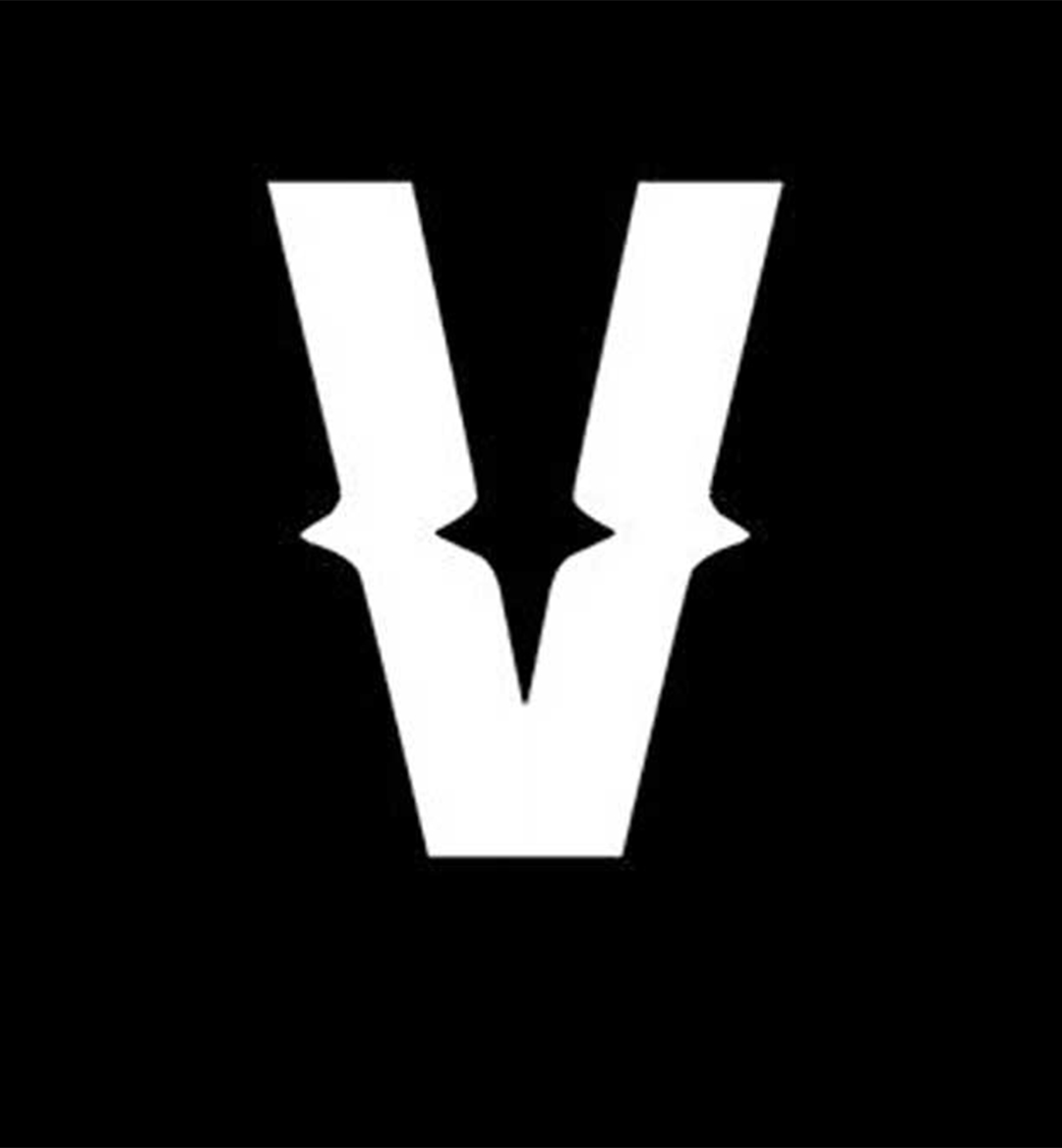 It all started with a friendly beat battle between hip-hop/R&B super producers Swizz Beatz and Timbaland. Once viewers got a taste of what the Verzuz concept could offer, they began fantasizing over which battles they’d like to see next.

Sensing a game-changing opportunity on their hands, Swizz and Timbo pooled their finances and industry contacts together to turn the Verzuz concept into an ongoing webcast series. Ever since then, we’ve had the pleasure of watching musical legends play their best songs, drop a few verbal gems about life as a whole, and provide some cool backstories behind the songs that make us jump out of our seats as soon we hear the first note. RZA vs. DJ Premier, Erykah Badu vs. Jill Scott, Bounty Killer vs. Beenie Man, and Teddy Riley vs. Babyface definitely stand out as some of the greatest Verzuz virtual concerts thus far. And judging by the future slate of battles, everyone can expect to be treated to even more memorable faceoffs throughout the remainder of 2021.

Even though Swizz and Timbo clearly know what they’re doing, we still have a few suggestions for dream Verzuz scenarios that we’re sure music aficionados would love to see. If any of the 10 battles listed below came to fruition, the excitement would be through the roof and the celebratory atmosphere attached to the Verzuz brand would hit another level.

10. Boogie Down Productions vs. Public Enemy 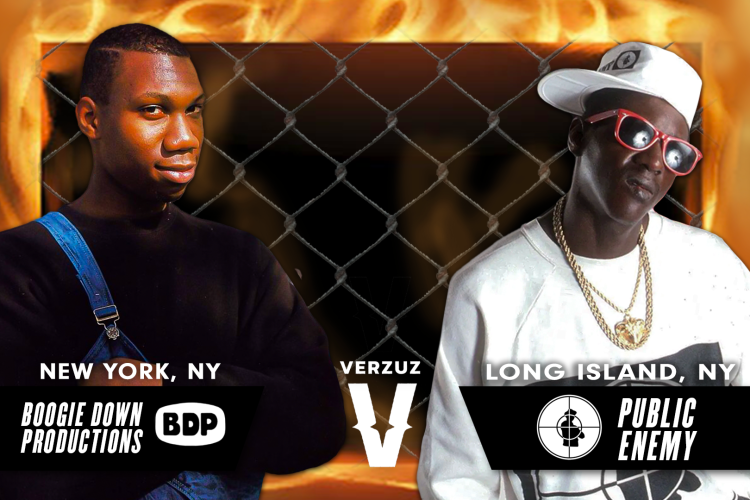 Biggest Song Clash: “The Bridge is Over” vs. “Fight The Power”

It’s about time we got a soundclash between two 80s hip-hop/rap staples. And the two candidates that would make for such a hot contest are Boogie Down Productions and Public Enemy. Both groups are held to the highest standards of their genre due to their history of delivering raps that reflected their political and social activism efforts. Getting KRS-One and Chuck D in a room together would simply be a dream come true. Plus the sight of them being joined by D-Nice, Flavor Flav, and the rest of the associated acts that came from Public Enemy would also be an incredible sight to see. This fantasy battle would be the ultimate blast of nostalgia for 80s hip-hop heads everywhere. 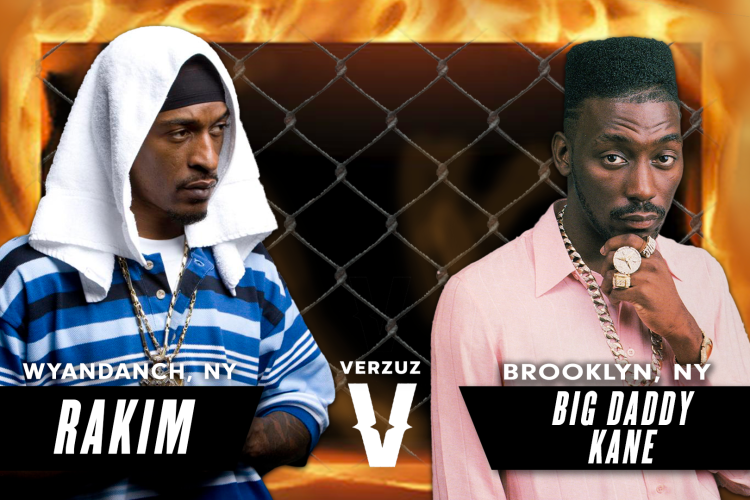 Rakim and Big Daddy Kane are regarded as two of the finest MCs of all time. The way they ride a beat is inspirational and their signature flows have influenced countless rappers since. To see these two greats grab a microphone and remind everyone just who the illest is would be awe-inspiring. Rakim and Kane have so many classic songs in their respective catalogs that could finish off any lesser artists. But imagine just how neck and neck it would be to see them bring out their biggest musical guns against each other in the ultimate test of lyrical skill. Somehow someway, this battle needs to be booked as soon as possible. 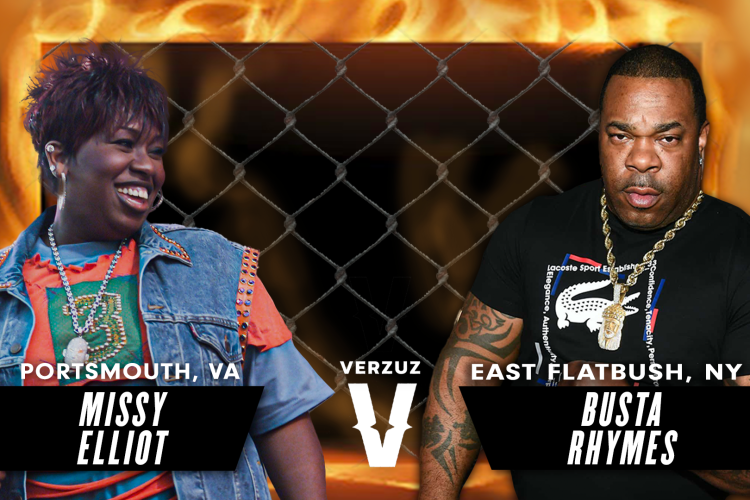 Biggest Song Clash: “Get Ur Freak On" vs. "Put Your Hands Where My Eyes Could See"

Busta Rhymes certainly talked a big game when presented with the possibility of hopping into a Verzuz battle. We’d love to see him back up all those braggadocious statements by getting in the ring with someone that has a library of hits that can keep up with his classic bangers. We think Missy Elliot would make for an amazing wildcard opponent in that regard. Both Busta and Missy are known for delivering visual tour de forces in the form of music videos, plus their energy levels would be through the roof if they ever got to sit in the same room together onscreen. This Verzuz battle would pretty much be a party full of good vibes, great music, and that “get out of your seat” energy hip-hop heads embrace so much when their favorite jams come on. 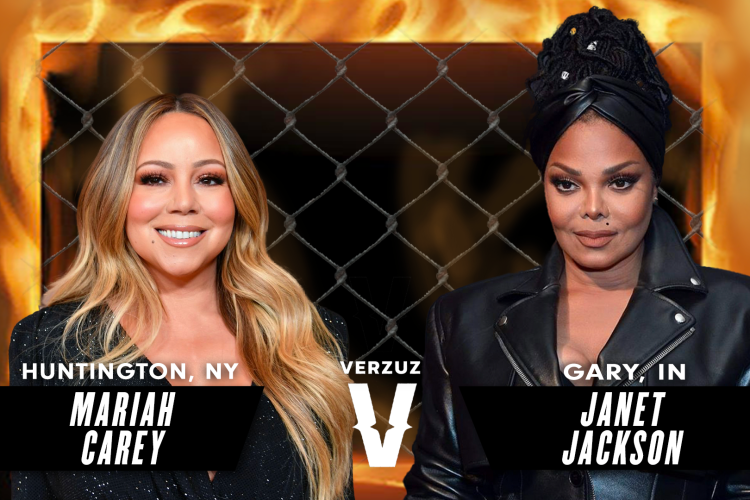 We thought long and hard about this one. Since Mary J. Blige made it clear that she doesn’t want to participate in a Verzuz battle, we racked our brains over who’d be the next best option for someone of Mariah Carey’s caliber. And the name that immediately came to mind was Janet Jackson, who’s definitely another R&B songstress that’d be hard to beat. Both Janet and Mariah have endured throughout the many different periods of their genres and stayed relevant throughout them all. This battle would be an incredible showcase of both women’s long-lasting legacies and give new/old fans alike a warm evening full of classic R&B ballads. 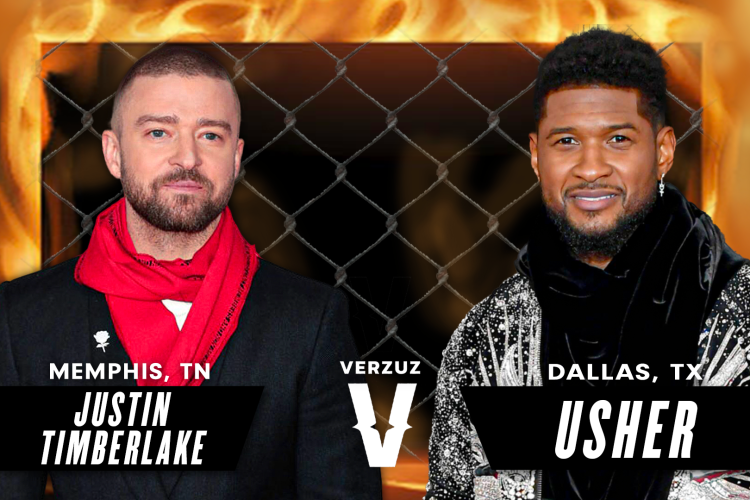 This Verzuz battle scenario gets us super excited since it’d be the ultimate battle of R&B pretty boys. Judging by the massive lineup of memorable songs both men are responsible for, this battle would likely go over its allotted time (which would totally be fine, by the way). You could put the entirety of Usher’s “Confessions'' album against everything featured on Justin Timberlake's “Justified” LP and we’d be more than satisfied. But both of these R&B legends have a wide swath of smash hits that aren’t associated with those two incredible albums, which means this Verzuz battle would easily captivate an entire generation of 90s and 2000s babies. 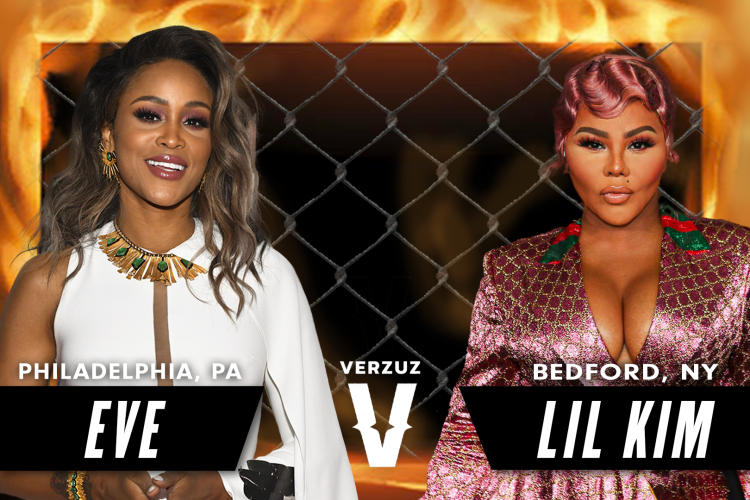 It’s become quite clear that a lot of our favorite female MCs from back in the day don’t exactly send each other Christmas cards every year. The beefs that have taken place among hip-hop queens such as Lil’ Kim, Foxy Brown, Nicki Minaj, Remy Ma, and others have made the prospect of a Verzuz battle between that group of ladies virtually impossible. But there’s one beef that’s seemingly been cleared up on both sides and it’s the one that transpired between Lil’ Kim and Eve. If Swizz and Timbo can work magic as they’ve done before, we think it’d be wise for them to get those two femme fatales a room together to battle it out for lady MC supremacy. Both Kim and Eve have a ton of singles to their credit and some memorable features that would instantly remind folks of just how strong they were during their championship runs. 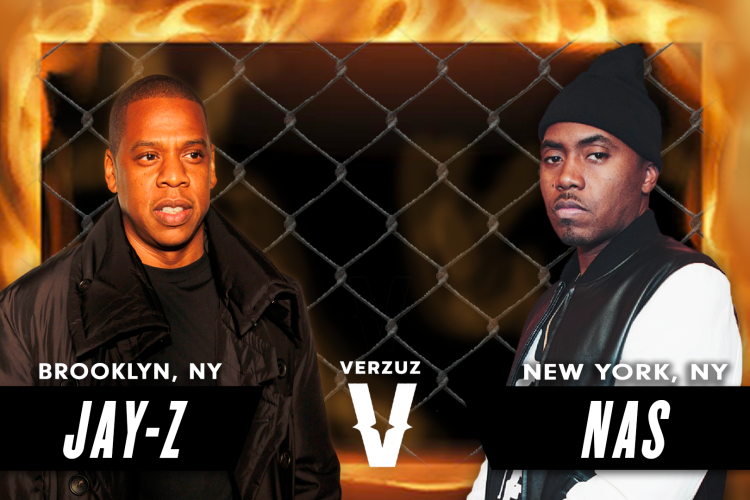 Biggest Song Clash: “Can’t Knock The Hustle” vs. “The World is Yours”

The heavens would open up, traffic would stop dead in its tracks, and hip-hop heads everywhere would shed a single thug tear if this Verzuz battle was ever officially announced. The impossibility rate of this iconic faceoff is too damn high, but we’re going to will it into existence anyway. Jay-Z vs. Nas was a very real thing at one point and it’s still held up as one of the most unforgettable beefs of all time. But now both men have grown up and made amends for their past transgressions against each other. We’d lose our ish if both of those legendary rappers hit the stage together at a live venue of some kind and pitted their best songs and features against each other for the world to see. And having it all capped off with a captivating performance of “Black Republican” would warm our cold hearts. 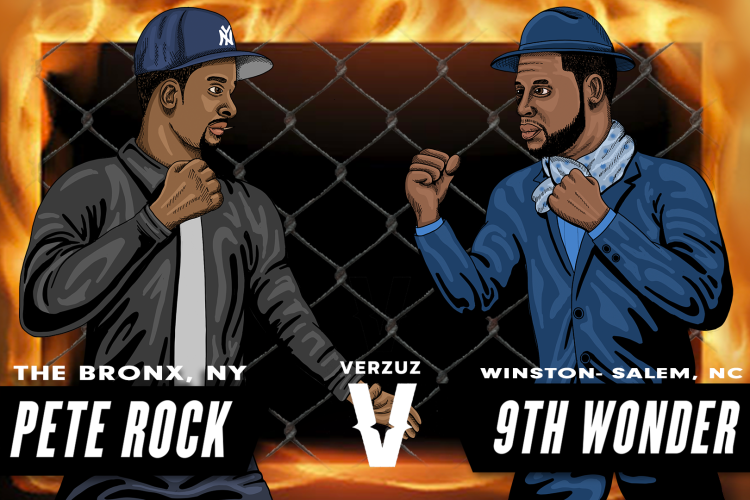 Let’s take a trip to the land of fantasy beat battles real quick. When you think of incredible boom-bap rap beatsmiths, two names should immediately spring to mind - Pete Rock and 9th Wonder. During their respective eras, both producers provided both mainstream and underground acts with some of the hardest audio soundscapes anyone has ever heard. Now imagine if they stood across from each other and got into a beat brawl to end them all. Pete has nuclear missiles like “Shut ‘Em Down,” “Straighten It Out," and “The World is Yours” in his arsenal, while 9th can counteract with bangers such as “Threat,” “Slow Down,” and “Let It Go.” The headbanging and neck-breaking would be off the charts for this one. 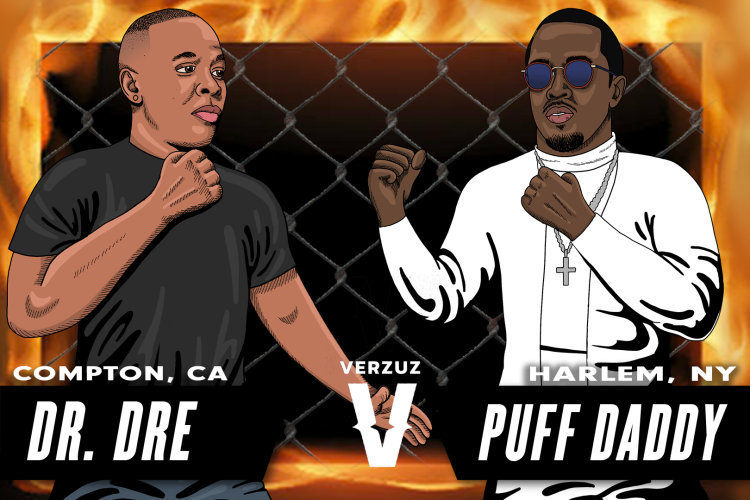 Biggest Song Clash: “Still D.R.E.” vs. “It’s All About The Benjamins”

During a recent Breakfast Club interview, Swizz noted that an instance of technical difficulties scared the legendary Dr. Dre from possibly participating in a future Verzuz battle. But we hope Dre will someday reconsider and throw his hat into the ring for a battle with his biggest rival on the East Coast. A battle between Dre and Puff Daddy would make our musical dreams come true. Dre has a ton of iconic beats under his belt and that same sentiment applies to Diddy - it’d be so hard to decide the winner between songs such as “Gin and Juice” vs. “Big Poppa” and “California Love” vs. “Juicy.” Then you have to factor in the classic songs Dre and Diddy performed on themselves, which would lift this Verzuz battle to a whole ‘nother level.

1. Pharrell & The Neptunes vs. Kanye West 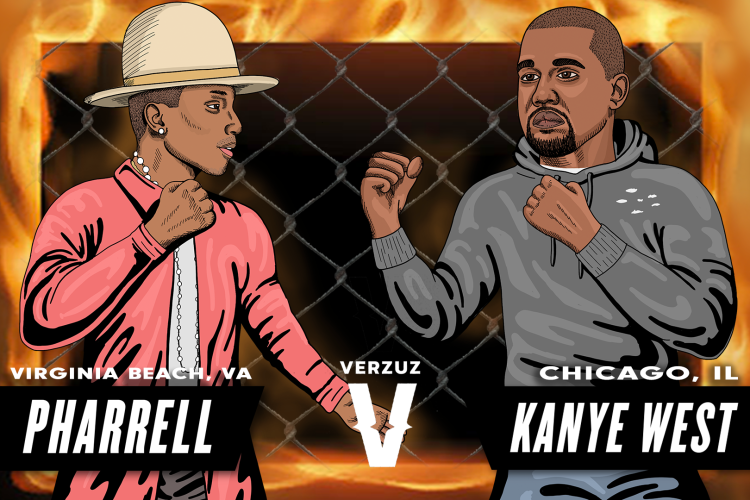 This. Needs. To. Go. DOWN! Pharrell & The Neptunes have most likely produced your favorite artists’ best songs. And it goes without saying that Kanye West is responsible for creating some of the greatest beats for that same collective of top-tier artists. We’d plop down for three or even four hours to watch both sides get in the studio for the livest Verzuz battle of all time. Just imagine the moment where Pharrell & The Neptunes and Yeezy pull off a round with their best Jay-Z songs - “I Just Wanna Love U (Give It 2 Me)” vs. “Lucifer” would blow our minds immensely. Factor in the hit singles that both producers hopped on themselves and you have a near-limitless array of amazing bangers to enjoy. This is the Verzuz battle of all Verzuz battles and we hope Swizz and Timbo can make it a reality before we leave this plane of existence.