Inside Young Thug’s No. 1 Album: How James Harden and Future Helped Finish It

“It was a frenzy to get it mixed, mastered and released” 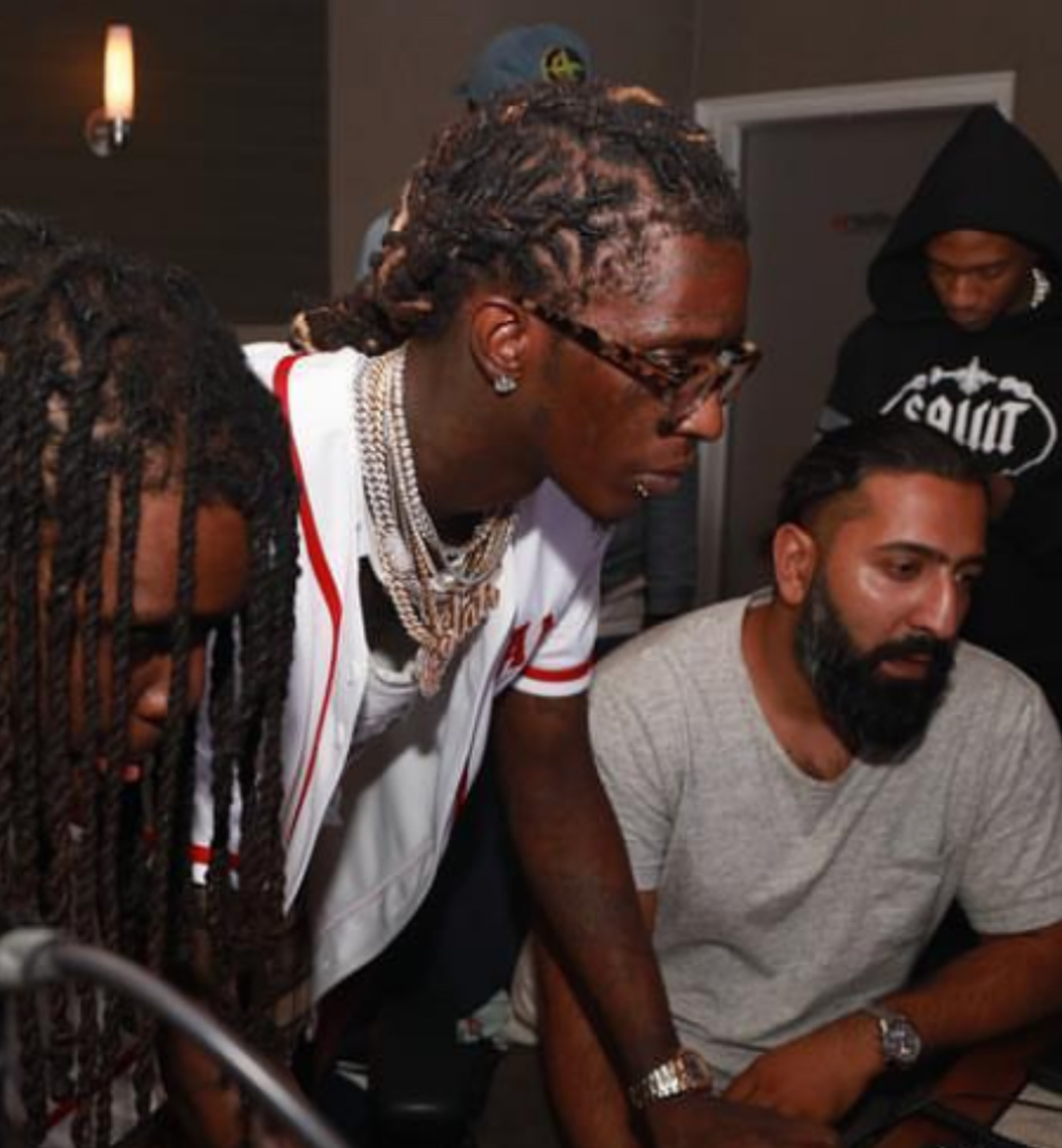 Young Thug’s new album, So Much Fun, which debuted at No. 1 on the Billboard 200 chart in late August, is out of this world, and it’s partly because he recorded it that way. “One day Thug got this idea and said, ‘Yo, I want stars in the ceiling,’” recording engineer Angad “Bainz” Bains told ONE37pm. “I was like, ‘All right, I got you.’ Within three days the studio looked like the inside of a Rolls-Royce Wraith.”

Few people understand how nuanced 28-year-old Thug’s creativity is—or have gone to such lengths to cultivate it—like Bainz. Since 2017, Bainz has recorded Thug so many times at his Crosby Collective Recording Studios in Los Angeles that he’s helped set up the recording space for Thug to comfortably create his four latest solo albums. “I’ve set it up so he has this button in front of him where he records so he’s completely in charge of the colors [in the studio], so he can dim or lighten it up however he wants while he’s recording,” Bainz revealed, speaking to us days before So Much Fun topped the charts.

A front-row view of a workaholic

Thug is a notorious workaholic, and Bainz can recall only 30 total days over the first eight months of this year when the flow contortionist wasn’t Siamese-close with Bainz in the studio. For So Much Fun, Bainz helped record 15 songs along with assisting Thug’s longtime engineer Alex Tumay with mixing the record. For Thug, recording is breathing—essential but not always consciously intentional. Bainz doesn’t remember Thug ever explicitly mentioning being in “album mode” when recording the songs for So Much Fun. Bainz didn’t even know when So Much Fun was coming out until days before its release on August 16, 2019.

“There were times, four or five days, when we would do 10 to 15 songs, then do a few songs a day. He’d take a break for a day and just hang out, play some video games and clear his head. Then he’d get back into it,” Bainz said.

A frenzy to record and add songs and verses

Anything, including jewelry comparisons to Chuck E. Cheese coins and Michael Myers references, can randomly appear on a Young Thug record, and his studio sessions for So Much Fun were no less random in nature.

NBA player James Harden stopped by the studio weeks before the album dropped to preview the new music and offer his last-minute opinions on it. Lil Yachty, Offset and Gunna also made appearances. But the way album standout “Sup Mate” was made exemplifies the spontaneity that birthed such an album.

“We thought the session was over. I was half asleep. Then Future pulls up at six in the morning and they worked all day. This happened a few days in a row. This was about two or three months ago,” Bainz said.

Future may be the only rapper who matches Thug’s tenacious recording habits since he’s known to record for several consecutive days. Although the duo can work for days on end, the core of the fan-favorite song was the result of seven minutes of recording whatever thoughts came to their heads.

“I was sitting in the middle, and you have Future on one side and Thug on one side. They would go four bars each, freestyling,” Bainz said. “We’d find bits that were cool. We’d fool around, and then Thug went in later and did some edits. They changed some vocals over time, like adding a few words.”

The Lil Baby–assisted “Bad, Bad, Bad,” “Jumped Out the Window” and the Gunna-featured banger “Hot” were all recorded just weeks before the album was released. The last track recorded for the album, “Boy Back” featuring Nav, was recorded the day the album was turned in. “It was a frenzy to get the record mixed, mastered and released on time, and amid that chaos, we got Machine Gun Kelly’s verse on ‘Ecstasy,’” Bainz said.

Bainz attests that even though MGK’s verse “slipped by us, between Thug’s A&R and the engineers,” Thug was adamant about getting MGK back on the song, as was originally intended, especially since they’ll be touring together.

On August 25, So Much Fun hit No. 1. Less than a week before that, Bainz witnessed Thug record six new songs. That makes sense, because Thug has already started working on his next solo album, Punk, which Bainz described as “a little more raw, a lot more personal” and recorded around the same time as So Much Fun.

“Even before the album was out, he already had the next album’s concept done. Up until [So Much Fun] was coming out, we were still working on other stuff for the next project,” Bainz said.

At the rate Thug records, Bainz may not get much sleep in the near future, but lucky for everyone else, we’ll surely get new music.

This Week In TikTok

Juicy J and GaryVee Team Up On Asterisk*, Changing the Weed Game Forever