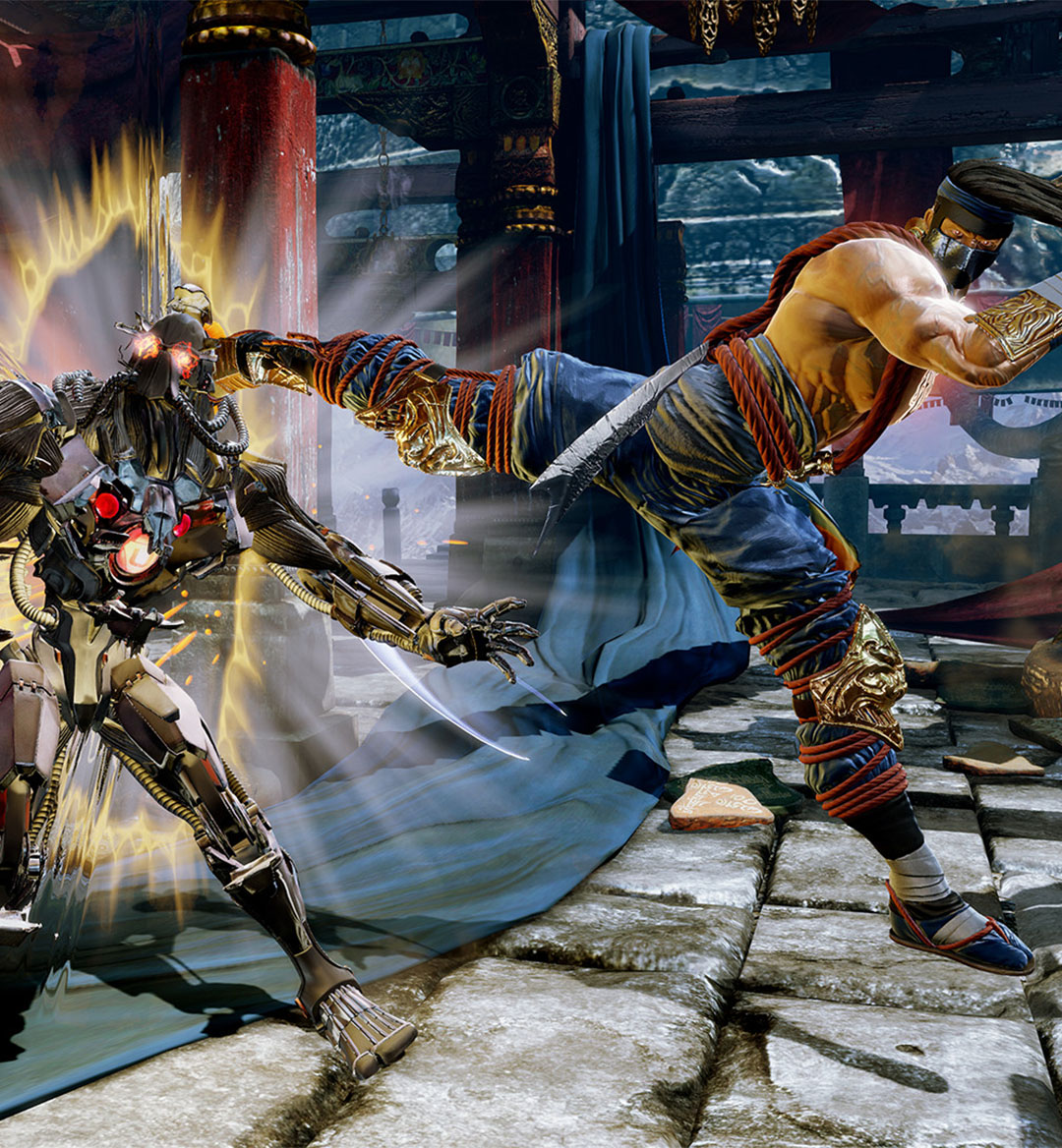 When one is completely engaged in an intense fighting game set, the sounds of the outside world no longer have any meaning. The laser focus that one gains while trying to outdo their opponent is key. And only the reverberations of strikes landing and special move callouts matter to you and your current rival. But from the outside looking in, onlookers may become enraptured by a few other elements. The onscreen spectacle taking place is one thing, but the audio backing a hard-fought battle can be just as enrapturing.

Speaking of audio, it’s easy to get caught up in moment-to-moment gameplay thanks to the catchy tunes blasting away in the background. Fighting games have provided a bevy of incredible tracks that have made it onto many a person’s workout playlists. We’re here to reminisce about the very best fighting game OST’s and make sure you have a new batch of songs to jam out to during your daily commute.

By the end of this list, you’ll be annoying your friends with the lyrics from Marvel vs. Capcom 2’s character select screen in no time. “I’M WANNA TAKE YOU FOR A RIDE!”

The sound design team behind Bandai Namco’s premier 3D fighter deserves all the credit in the world. For years, Tekken fans have been treated to amazing OSTs that run the full gamut of musical genres out there. The first two series entries have a ton of memorable tracks that sound great in both their original arcade and home port variations. Then Tekken 3 hit the scene and truly upped the ante for the series’ soundtrack as a whole.

From that point forward, Tekken has presented a bevy of strong bops when it comes to electronic dance music and so much more. There are just so many memorable Tekken tracks worth mentioning - the character select theme from Tekken 2, Jin’s theme from Tekken 3, and Tekken 5: Dark Resurrection’s “Estrada Da Estrela” are just a sample size of the musical gems the series has to offer. Tekken’s soundtrack is so strong that it has the power to easily get a club dance floor jumping (the Beach theme from Tekken 4 can definitely get everyone out of their seat.

Capcom’s “Vs.” line of 2D fighters captured the imagination of Marvel Comics fanatics and Capcom diehards alike. From X-Men: Children of the Atom right on up until Marvel vs. Capcom: Infinite, players’ ears have been treated to the types of tunes that match the vibe of each member of the series’ massive roster to a tee. The CP System II arcade board played host to most of the Vs. fighters’ installments, which is why a ton of fan-made songs have been created in its honor.

Guile’s theme. Yes, we already know how that song took a life of its own and became a YouTube sensation a couple of years back. 90s babies that frequented their local dingy arcade came to love the Sonic Boom blasting American hero and his epic theme. And we’re guessing those same kids also grew to appreciate the rest of Street Fighter II’s memorable tracklist.

Now we have to give the Street Fighter Alpha series its flowers for blessing our ears with a multitude of satisfactory tunes. The first two entries managed to provide some fire remixes when it comes to the original cast of “World Warriors.” Hearing those classic renditions come through with an even more vibrant soundscape was and still is pretty damn cool.

Once Street Fighter Alpha 3 came our way, the music definitely rose in quality. You can pick up on the harder edge each track attempts to get across, as evidenced by Ryu, Akuma, and M. Bison’s super hype themes. The Street Fighter Alpha games aren’t just top-notch 2D fighters, but they’re also the finest examples of Capcom’s affinity for crafting incredible OSTs. Now excuse us while we Milly Rock to Karen’s theme...

Yep, we’re still gonna navigate the audio goodness the Street Fighter series has provided fans with over the years. Next up is the Street Fighter III games, which took the entire franchise in a whole ‘other direction. The New Generation and 2nd Impact variations were clearly backed by a whole new batch of sounds, which made them feel distinct from their predecessors. We were treated to some groovy tunes, jazzy vibes, and even some tribal beats (Elena’s theme from New Generation is just...man!).

And for our last bit of Street Fighter music appreciation, we gotta send a shout to the fully 3D entries within the long-running franchise. The good folks at Japanese development studio Arika certainly rose to the occasion when it came time to take Street Fighter into a polygonal future. The games they produced were better than they had any right to be.

But the main takeaway from the Street Fighter EX series was just how exceptional the OST’s from all three games are. “Precious Heart,” “Spinning Bird,” “Stronger,” and “Guardian of Light” all slap tremendously hard and so does the entirety of the soundtrack for Street Fighter EX Plus α. Later entries in the series also came with plenty of heat, such as “Flash Train,” “Iron Eyes,” and “Coldman Rosso.” The Street Fighter EX games are the types of fighters that should never get the mute button treatment.

Arc System Works’ standout anime brawler went full metal from the very beginning and has caused us to bang our heads ever since. It’s quite evident that the creatives behind Guilty Gear have a huge appreciation for punk and thrash metal - every series entry has sent forth a bevy of songs that have memorable guitar strings and unforgettable percussion patterns.

Even when the series offered some Church organ music for a nice change of pace, it still managed to stay on brand and keep it as metal as possible (just look up “Holy Orders” to get an idea of what we’re talking about here). “Burly Heart,” “Heavy Day,” and “Smell of the Game” have inspired us to jump into mosh pits and try our hand at shredding a guitar with the best of ‘em. Guilty Gear’s long list of OSTs is pure metal goodness and undeniably outstanding.

Everyone knows just how loud the Killer Instinct games used to be when they dominated the arcades. Its overly excited announcer belted out memorable phrases such as “C-C-C-C-Combo Breaker!” and “Danger…” for anyone who happened to be within the game cabinet’s vicinity. And once you got your turn on the sticks, it was easy to get caught up in just how catchy Killer Instinct’s music is.

The first two series entries relied on electronic dance music, rock, hip-hop, etc. to get its musical point across. And then there are the haunting tunes that did a great job of building anticipation as hard-fought matches wore on (Spinal and Fulgore’s theme are great examples in that regard). The 2013 reboot of the series truly offers the best songs in the series to date. Video game music composers Mick Gordon, Atlas Plug, and Celldweller deserve plenty of praise for retaining the musical thematics of previous Killer Instinct games while simultaneously creating something brand new.

SNK knows a thing or two when it comes to crafting phenomenal video game theme songs. Thankfully, most of the Japanese publisher/developer’s strongest tunes can be found and heard throughout the entirety of The King of Fighters series. From The King of Fighters '94 right on up to its latest series entry, SNK’s team-based fighter has produced a jukebox full of prominent fighting game tunes. “Tsuchi o Hau Bass,” “Slum No. 5,” “W.W.III,” and “Arashi no Saxophone 2” all have the ability to get stuck in your head and added to your playlist. The King of Fighters franchise has done a commendable job of building upon its solid musical foundation by producing worthwhile remixes and fresh tunes worth recommending.

“This Is True Love Making.” “Happiness.” “Wicked Fight.” “Fight With the Wind.” Mention those songs to any avid fighting game player and they’ll instantly start humming the wonderful melodies from those well-crafted tunes. Those songs and a collection of other quality tracks are lifted from one of the greatest fighting games of all time, Capcom vs. SNK 2: Mark of the Millennium 2001. Crossover fighters usually have some great music on deck for their fantasy matchups and that’s definitely the case here. CVS2 has the perfect mix of hype-inducing tracks, dance club-worthy ditties, and super mellow soundscapes. Plus we gotta hand to this game for having one of the best staff credits roll themes of all time.

“Welcome back to the stage of history.” Soul Edge/Blade/Calibur’s signature narrator knew just how to get everyone’s excitement levels to go through the roof once it came time to clash with a weapon in hand. Bandai Namco’s other signature 3D fighter came onto the scene by offering something different from its hand-to-hand counterpart, which made it a fan favorite for many. Another part of the reason why the series is held in such high regard is its soundtrack. The world's finest 3D weapons clasher has just so many breathtaking songs on deck to get all nostalgic about. “The Edge of Soul,” “Future Dancin’,” '“The New Legend,” and “Raise Thy Sword” definitely take the cake when it comes to the best songs in the series.

We’d like to take this time to send our regards to the trio of Michiru Yamane, Brenton Kossak, and Blaine McGurty. Due to their musical know-how, the indie fighter known as Skullgirls stands tall thanks to its stupendous OST. The game’s implementation of jazz and classical music can be heard all throughout its clean presentation - songs like “Pedestrians Crossing,” “Pick of the Litter,” “Moonlit Melee,” and “The Lives We Left Behind” are clearly the best of the best. The unforgettable Skullgirls soundtrack was clearly crafted with a ton of care in mind and we’re always down to hear it get belted out of our car speakers.

Do you guys consider this entry cheating? The Super Smash Bros. series just so happens to feature hundreds of songs from a wide variety of the biggest gaming franchises of all time. But we’re still gonna keep Nintendo’s mega-crossover fighter on this list due to the nice batch of original songs and remixed tunes it has to offer.

The main themes from every entry in the series are all worthy of being celebrated - how can you not hum along to the one from Super Smash Bros. for Wii U and “Lifelight” from Super Smash Bros. Ultimate? As for the new renditions of classic tunes the franchise has on deck, we are madly in love with them all (“Gang-Plank Galleon” and “Kurikinton” instantly put a smile on our faces every time we hear them). Super Smash Bros. offers a vault full of awesome tunes worth listening to from front to back.

Before The King of Fighters franchise got all of SNK’s attention, Fatal Fury held its position as the company's most noteworthy example of fighting game royalty. Terry Bogard, Andy Bogard, and Joe Higashi traveled the world looking to beat down their rivals and put a stop to Geese Howard’s evil machinations.

Further entries in the series introduced even more playable characters and a bunch more OST’s that still have plenty of replay value. “Raiden the Brave,” “A New Poem That the South Thailand Wants to Tell,” and “Geese ni Kissu” are God-tier level tracks. Then you have Garou: Mark of the Wolves’ OST, which brings forth gems such as “Too Honest,” “Wilderness Policeman,” and “Destruction Maniac.” Fatal Fury and its many series installments are chock full of some of fighting game’s most outstanding tracks.