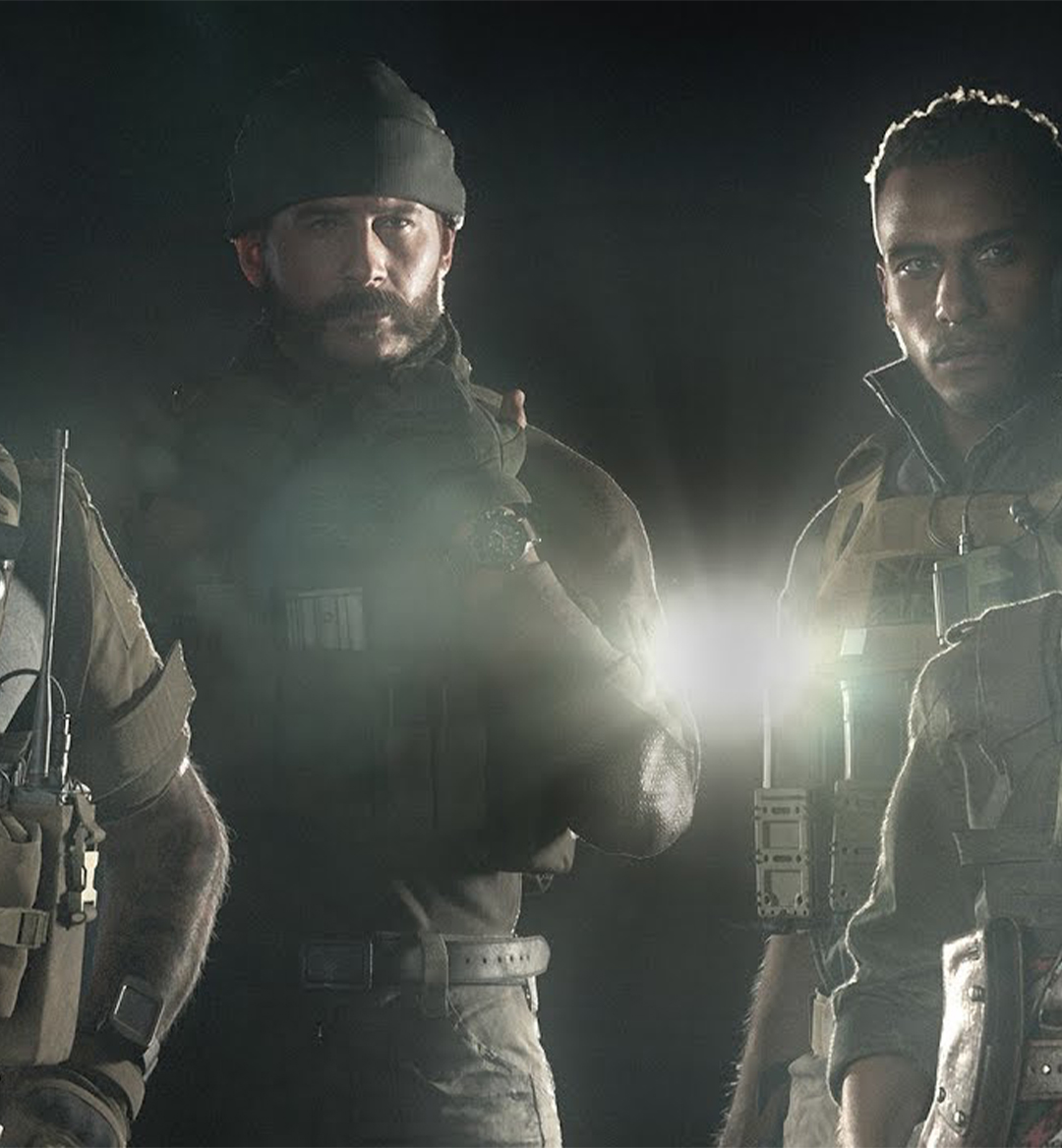 Back in the day, there was one World War II-themed first-person shooter that grabbed everyone’s attention. And that shooter was Electronic Arts’ Medal of Honor.

That franchise had a stronghold on the WWII FPS sub-genre for a good while...that is until Activision threw its own contender into the race. In 2003, development studio Infinity Ward released the very first entry in the legendary Call of Duty series. And the rest, as they say, is history. Years and years of countless sequels and spinoffs have built Call of Duty into a juggernaut franchise that has amassed millions (and possibly even billions!) of revenue on an annual basis. With so many series entries to speak off, we decided to take a look at all the mainline games and properly rank them according to their overall quality.

As we get closer and closer to the launch date for Call of Duty: Vanguard, we’re going to celebrate the series as a whole. So without further ado, let’s count down all the mainline series entries that you and your friends have probably played into the wee hours of the morning.

Many point to Ghosts as the initial downfall of the franchise as a whole. And it’s easy to see why. While the campaign was solid enough, it didn’t really offer anything memorable besides a lovable dog that most fans took to from the very first trailer. And in the case of multiplayer, the game’s expanded maps and complex architecture took away a lot of the fun most fans associate with the series. Ghosts ultimately feels like an uninspired take on the franchise that diehard fans lament to this day.

If you take a look at the reveal trailer for this game, you’ll no doubt be shocked by the insane amount of dislikes it managed to accrue. A good majority of COD players were none too fond of the series foray into futuristic warfare among the stars. Even with the overwhelmingly negative response to Infinite Warfare, it’s still a halfway decent game thanks to a darker narrative tone, a more open-ended campaign, and one of the better installments of Zombies to date. The multiplayer took a bit of a hit though due to all the wall-running that made downing your foes a chore.

Black Ops Cold War’s Vietnam Era campaign is part of the reason why this series entry is well-liked by many. Its usage of real-life political figures, an engrossing storyline, and clever approach to solving key mysteries gave it a different feel that was much preferred by fans. However, Black Ops Cold War’s underwhelming maps and newer modes keep multiplayer from excelling at the usual high-level COD multiplayer rests. And as far as Zombies goes, it’s passable at best.

Advanced Warfare was a crazy jump for the series from a thematic point of view - it embraced a new brand of warfare that looked like it could exist in the near future. For those that enjoyed Titanfall, this series entry came as close to that underrated FPS as possible. The explosive campaign, Exo Suit implementation, and Pick 13 system all did a great job of lifting Advanced Warfare among the franchise’s weaker entries. The game’s co-op Exo Survival Mode was a decent experiment, but it ultimately failed to be nothing more than an oddity.

Black Ops 3 didn’t really do anything remarkable to push the series forward in any meaningful way. But it still managed to be a satisfactory installment that retained all of the tentpole modes that fans have come to expect. The game’s campaign stands out thanks to its four-player co-op option and the cool equipment progression system contained within it (the uninteresting plot hampers it, sadly). The multiplayer modes suite and Zombies stick to the beaten path of past series entries, however, which keeps the experiences within them feeling a bit stale.

Call of Duty 3 gets some special acknowledgment from fans as it was the very first entry in the series handled by development studio Treyarch. And for their first try, it did a pretty good job of gifting players with a well-done WWII first-person shooter. Its campaign focused on four combined fronts instead of three like its predecessor, which gave players more viewpoints to acknowledge the war from. Plus the multiplayer was riveting at the time of release. The main knocks on this series entry are the same old, same old feel of the campaign from a gameplay perspective and the weaker story in comparison to Call of Duty 2.

It certainly took a while before Call of Duty returned to its modern-day roots. But in 2017, Sledgehammer Games returned fans to the WWII era in this series return to form. Call of Duty: WWII offered a compelling campaign that removed the regenerating health system in an effort to make enemy encounters even more of a nail-biter. Zombies was the true standout of this series entry, plus the multiplayer mode suite maintained the high fun factor of the franchise’s finest installments. The only knocks on Call of Duty WW2 are its overreliance on loot boxes and the overall predictability factor that comes from the well-worn Call of Duty formula up until this point.

It felt so good to return to the sub-series that truly put the Call of Duty series on the map. The 2019 reboot of Modern Warfare features one of the best campaigns in franchise history - playing on different sides of the war from the perspective of a CIA officer & British SAS forces and allied rebels from the Middle East meant that players got involved in a very engrossing storyline. The multiplayer was good, but balancing issues within certain modes and some weak maps kept it from being great. The new Gunfight mode and Survival mode are fun side diversions, but the game’s Spec Ops mode falters due to an overwhelming difficulty curve.

The third installment in the Modern Warfare 3 series kept the Call of Duty sub-series in a good place, thankfully. The continued struggle within the game between the United States and Russia provided the campaign with its usual array of explosive moments and major reveals. The multiplayer excelled thanks to the addition of three new modes - Kill Confirmed, Team Defender, and Infected. The Spec Ops and Survival modes weren’t as enthralling as the other two parts of Modern Warfare 3, but they didn’t do enough to bring down the game’s overall great quality.

When everyone found out that Black Ops 4 wouldn’t come with a campaign, fans responded with a hugely negative response. Once the game finally dropped, the blow of that missing feature was lessened thanks to a strong triple threat of multiplayer, zombies, and the series’ battle royale debut in Blackout mode. Blackout ended up producing one of the very best battle royale experiences in the genre. Zombies was also a plus, while the multiplayer took a bit of a hit due to some weak maps and strange spawn areas that allowed for the competition to get easy kills.

The original Black Ops ended up being a smash hit and a true landmark for the series. So when Black Ops 2 arrived, expectations were incredibly high. Thankfully, those lofty expectations were met. This series entry continued the amazing plot introduced in the original and even introduced some futuristic plot elements that let players step into the shoes of Alex Mason’s son. The multiplayer and Zombie suite hit the same high levels of the variations seen in the first Black Ops. However, the Strike Force missions and Pick 10 armament system within competitive multiplayer ended up this game’s main two blemishes.

After Modern Warfare’s smashing success, the next annual entry decided to veer back into the familiar WWII realm. What we got out of that pivot was one of the better games within that time period, Call of Duty: World at War. The intense violence and gore contained within its campaign perfectly represented the brutal nature of the main conflict at hand, which was the Pacific theatre portion of WWII. The option to play through that campaign with a friend, the enjoyable multiplayer suite, and the hugely successful debut of Zombies puts World at War at the top-tier of Call of Duty releases. Some fans lament this game for not doing a whole lot to stand apart from other WWII-themed series entries, however.

The second Call of Duty kept the good streak going as the series became more of a respected IP. Call of Duty 2 enraptured console players at the launch of the Xbox 360 and it’s easy to recognize why - the game scratched the itch of FPS diehards by putting forth an eventful campaign that felt a bit better to play thanks to the introduction of regenerating health. Call of Duty 2’s PC performance was a bit lacking, which is something that can’t be ignored. But this series entry still managed to shine on a single-player and multiplayer front.

And here is the one that started it all. Once the very first Call of Duty landed, EA’s Medal of Honor was forced to bow out as Activision’s WWII FPS took the top spot in the genre. Even though the overall campaign was a tad too short, the first Call of Duty still knocked it out of the park thanks to high production values, high points of immersion brought on by the realistic audio, and impressive visuals for the time. As for the multiplayer, its 32-player battles were a dream come true for online players at the time.

Modern Warfare 2 arrived with plenty of fervor and fanfare thanks to the hugely positive response to the first Modern Warfare. This sequel did a great job of featuring the bombastic setpieces and high fun factor & replay value tied to multiplayer that was present in its predecessor. The “No Russian” mission definitely made a lot of players feel uneasy, plus the overall lack of innovation present in this game was noticeable. But overall, Modern Warfare 2 holds a special place in our hearts. Spec Ops is pretty damn good in this entry, that’s for sure!

“The numbers, Mason! What do they mean?” Utter those words out in public and at least a few folks will run up to you to spark up a conversation about this game’s mind-blowing campaign. Wading through a time period that takes place between the Cold War and the Vietnam War gave way to a wild war chronicle that shocked players with its huge narrative twist. Even the addition of getting to hear your own character speak was a huge plus for Black Ops! The competitive multiplayer was and still is top-quality entertainment. And the Zombies variation on offer here builds upon the solid foundation for the mode that got introduced in World at War.

What other Call of Duty game could it be? Of course, the first Modern Warfare would have to take the top spot during this conversation! This is the game that made headlines and brought casual fans into the mix - everyone and their grandmother heard about how incredible Modern Warfare is and were thoroughly convinced of that fact once they finally played it. The campaign may be short in comparison to other series entries, but it left a huge impression on everyone that experienced it. And the multiplayer? Damn near perfection! The introduction of UAV reconnaissance scans, airstrikes, and attack helicopters propped up the already strong gunplay and modes suite past entries introduced.