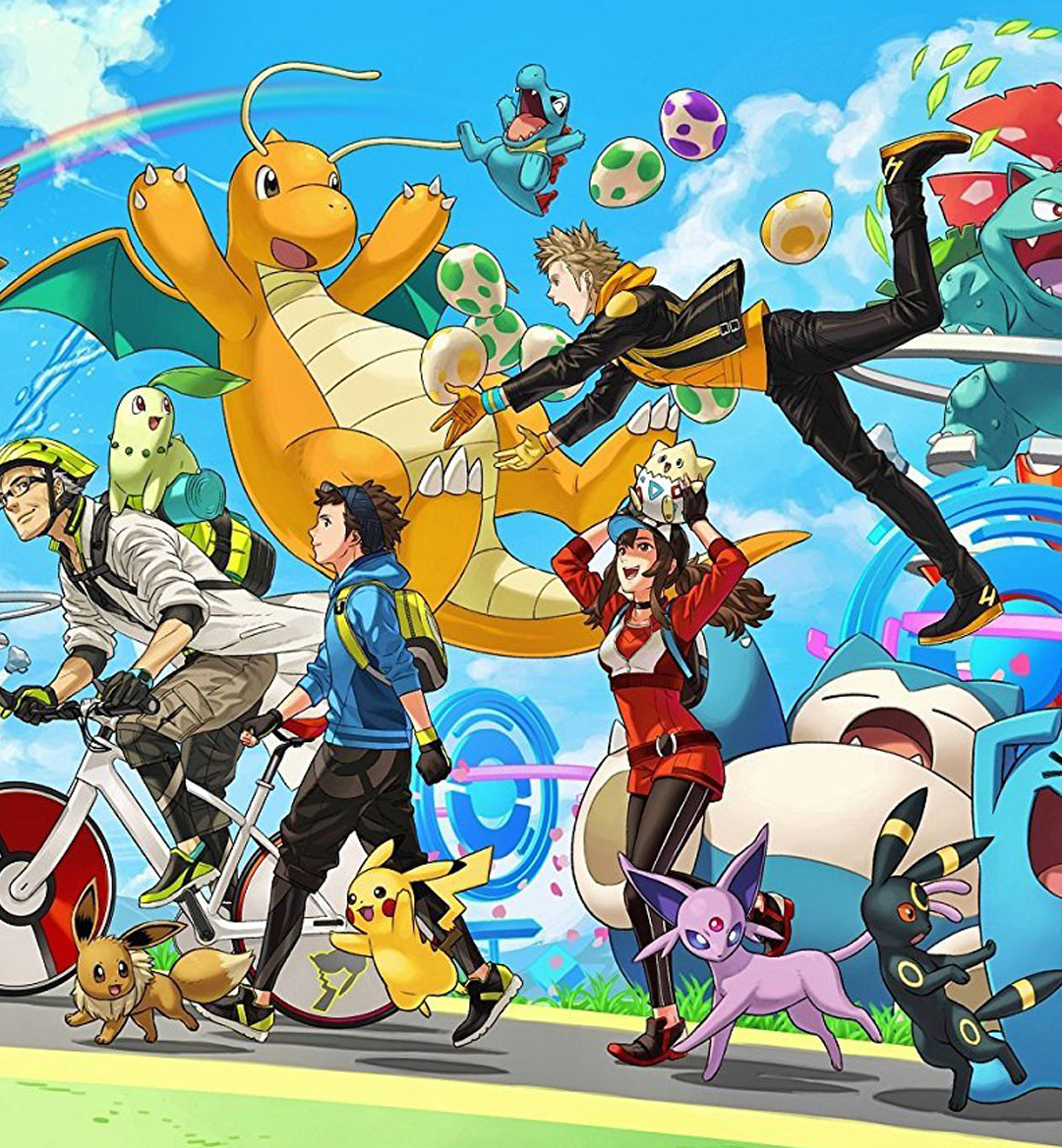 When it was released in 2016, Pokémon GO had an impact on the world like most developers only their dream that their own games could have anything close to. Within five days of its release on July 7th, Nintendo’s market value increased by an unfathomable $9 billion, and by July 22nd, Nintendo gained another $8.6 billion in market value. This, despite the fact that Nintendo did not even produce the game. From its July release to the end of 2016, it had been downloaded more than half a billion times worldwide.

The game brought an insane number of eyes to augmented reality technology in gaming and location-based technology in general. As a result of players walking around looking for Pokémon, physical activity was promoted and incredibly, local businesses even benefitted.

Developers have certainly taken full advantage of the extra attention on AR games and in the past few years, a ton have been released. If you love Pokémon GO and want to experience something in the same lane, we’ve compiled a list of 16 games like it for you. In alphabetical order, here they are.

Angry Birds has been a staple in mobile gaming for a long time now, over a decade in fact. Angry Birds AR: Isle of Pigs is the latest in the main series and it's one of their classic puzzle games. If you’ve played an Angry Birds game before, you kind of know what to expect with an AR version. Seeing foundations topple right in your own home is a fun experience and is well worth checking out.

Developed by Talking Pet and released in September of 2017, AR Dragon sees the player take on the role of taking care of a pet dragon. Seeing your own dragon in the environment around you with augmented reality really adds immersion to the game. You’ll have to feed your dragon, play with it and train it. This is today’s answer to the Tamagotchi.

This one can also be played in the home or pretty much any other environment. The idea, as you might be able to guess from the name, is that you’re looking for some hidden treasure that you’re able to find with the help of a pirate-style map. It’s a simple one but is really heightened by the fact that you’re walking around your own home looking for gold.

This game has received some criticism for its narrative being a little clustered, but even if you just take the gameplay at face value with the storyline put aside, it’s definitely worth checking out. Clandestine: Anomaly sees the player defending against an alien invasion that seems like it’s happening right there in the world around you. Your offensive and defensive tactics here matter, so choose them wisely.

This game is one of a few on the list that uses Apple’s ARKit technology, which is a development platform that helps developers add augmented reality into their games quickly. dARk: Subject One is a horror game that borrows from sci-fi because there is a parallel universe that you must enter to try to look for someone. Having things going on right in your home definitely adds a layer to the fear that this one induces.

Described by developer Groundspeak Inc. as the world’s largest treasure hunt, Geocaching is unique because it involves real-world objects. Basically, you go onto the app and once you tell it where you’re located, it will tell you where your nearest geocache is. Solving mini puzzles on the game will give you hints as to where your nearest geocache is located. You can also make friends with people online who are on the same mission as you.

Specially similar to Pokémon GO, in Ghostbusters World, your job is to take down ghosts. Developed by FourThirtyThree Inc., if you’ve seen any of the Ghostbusters films, your experience with the game will undoubtedly be enhanced because there are some of the same ghosts in it. In fact, the game was developed with the moviemakers, so expect a lot of crossover elements. Despite this, even if you’ve never seen one of the films, you’ll be able to enjoy this. You can either go it solo or team up with fellow Ghostbusters nearby.

Harry Potter: Wizards Unite is one we highly recommend for fans of Pokémon GO because it’s actually developed by the same people, Niantic Studios. That’s clear when playing the game too, but not in a way that would have you feeling that it’s too similar. From the start, you pick whether you want to be a Professor, Auror, or Magizoologist. Instead of other people’s Pokémon, here you battle mythical beasts. Instead of Pokéstops, there are Inns. There are a bunch of real-world locations where you can discover artifacts and meet characters from the franchise.

Just like Harry Potter: Wizards Unite, Ingress is another creation by Niantic Studios, the same developer that brings you Pokémon GO. It’s actually their first AR game. For that reason alone, it’s probably worth giving a try. On the app, you’re an agent whose job it is to discover portals around you. When you find one and get XM (Exotic Matter, a mind-altering energy discovered by European scientists that’s taking over the world), you can either be part of The Enlightened or The Resistance. The former tries to dominate mankind, and the latter fights back against The Enlightened.

Real Strike turns the environment around you into a military base and is basically an augmented reality first-person shooter. If that doesn’t sell it to you, not much else will. You can records videos onto your phone and combine them with this game to make it seem as though you’re shooting whatever’s in front of you. Perhaps this one has some tricky real-life implications and a teen in America got in trouble for making it seem as though he was shooting some of his classmates, but as long as you’re using it for some light-hearted fun, you’ll be fine.

Launched in October of 2018, Run an Empire was made with the hope of getting people to explore their cities and get some exercise at the same time. The concept of the game is that any area outlined with hexes in the game are areas that if the player walks/jogs/runs around, they will capture. It gives people an incentive to get out there and get their heart rate up with a fun little concept that adds some competition to things. Get your local friends in on the fun and compete for the areas around you.

To play Sharks in the Park, you’ll need to be in an area slightly bigger than the average living room. Ideally, head to your local park to get the full experience here. As the name suggests, it’s based underwater, and the aim is to capture schools of fish. The faster you run (or swim), the more you catch. Simple.

Another treasure hunting AR game, Temple Treasure Hunt turns your world into a temple filled with ancient artifacts that it’s your job to discover. You can share a treasure trail with a friend and hunt the same treasure together.

In a world where augmented reality games become increasingly popular, The Machines is widely regarded as one of the better ones, largely due to its graphics. Players command Champions and must think carefully about their position in the real world because it affects how well you’ll do in battles within the game. Playing against the computer is fun enough, but the game also offers a multiplayer option.

Simply put, this game is a must-play if you’re at all into The Walking Dead, the TV show. Developed by Next Games, you’ll immediately recognize the feel of the game if you’ve seen the show, and some characters will even appear. Essentially, this is a zombie apocalypse as an AR game. There are many of these around, like Zombies Everywhere and Zombies, Run!, but this is heralded as one of the better ones. As with any great game, you can play alone or with some friends in the co-op mode.

Developed by Wallame Ltd, you’ll feel a real sense of community while playing WallaMe. Using the app’s AR, you can leave virtual messages or images on walls around you in a graffiti style and anyone else that utilizes the app will be able to see them. You can either have fun drawing things of your own or explore the world around you to see what other people have drawn. If drawings around you are scarce, perhaps get a few friends to download the app and draw things in a certain area, finding a new and fun way to communicate.