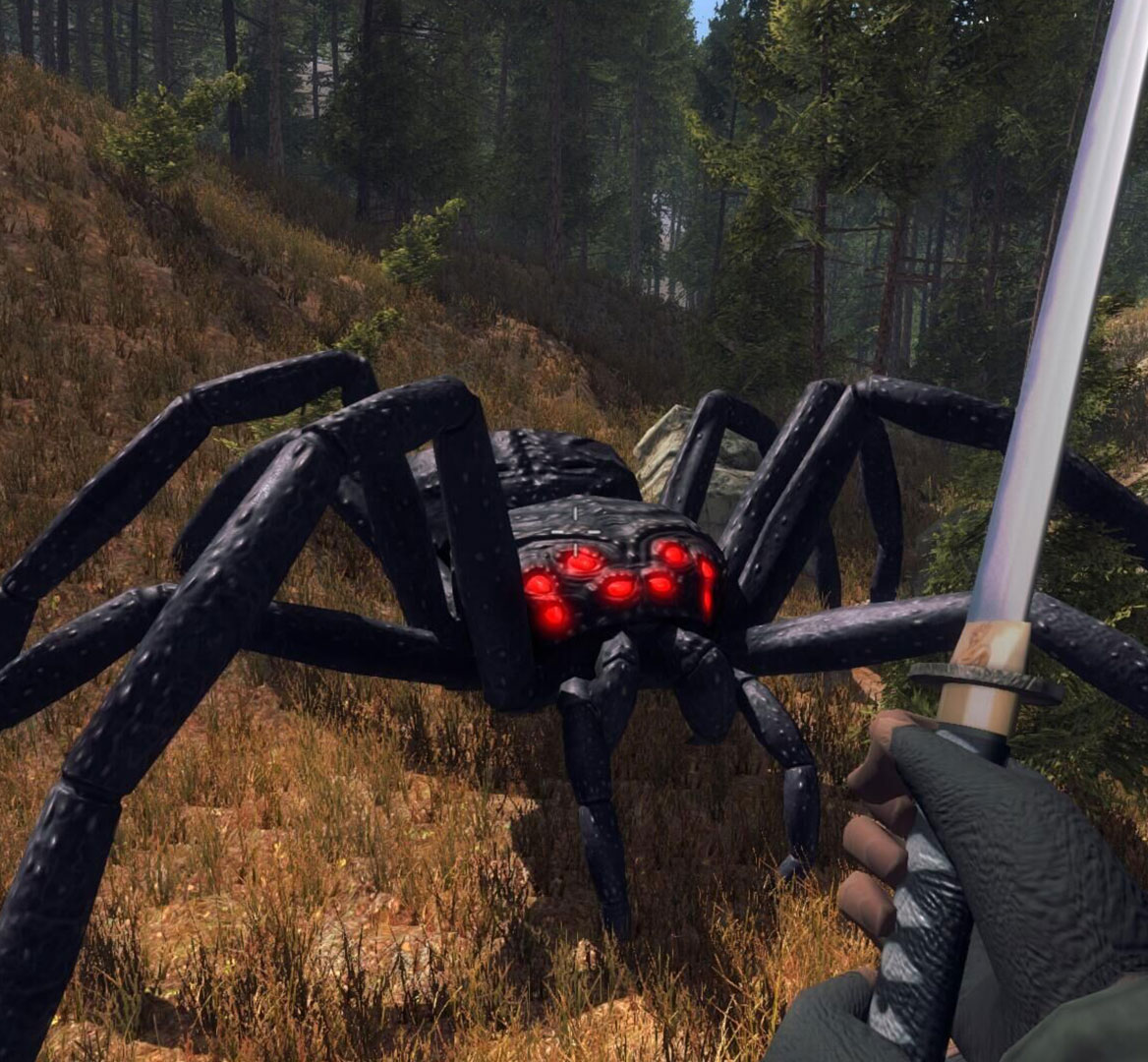 There is always that one game that is to blame for a genre’s flash-in-the-pan success and for the survival game genre it’s Minecraft. Some of the earlier titles managed to garner a measure of Minecraft’s commercial success, while many others were, to be frank, uninspired cash grabs. Then there is The Forest, a 2014 release that is neither a commercial success or a craven means to capitalize off survival games popularity.

The Forest is one part game, one part tech demo, which showcases the limits of enemy artificial intelligence, which is, perhaps, the game’s primary draw. The enemies act distinctly human, something many games have tried, to varying degrees of success. The Forest, however, takes an honest stab at it, realizing that the key component of survival games are the elements that threaten your survival. The game’s emphasis on convincing a.i. only enhances the immersion which makes The Forest a standout in a genre slowly creeping toward peak saturation.

The following are games that also manage to stand out due to their similarities to The Forest.

The one game on this list that’s not only similar to The Forest but significantly expands upon it. Green Hell has the player exploring a vast jungle while navigating all the dangers and pitfalls one would expect from a jungle. Much like The Forest, gathering tools for crafting is important. Both games also feature a sanity element in which players' mental health are contingent on what they do throughout the game. While Green Hell might be a bit more realistic than the Forest, there is no question the latter’s DNA is present in the former.

Although a bit more lighthearted than The Forest, survival is still the key mission for those playing Astroneer. Instead of cannibals and hunger, Astroneer players have to worry about oxygen, power, and the occasional deadly alien fauna. To survive players must make use of their surroundings to build bases on a handful of planets. The game manages to be challenging while not sacrificing the whimsical gameplay that attracts players.

Any list about survival games would inevitably feature zombies and this list’s game is the State of Decay. Not to be confused with its sequel, which features more heavily on the narrative, State of Decay is a bare-bones zombie survival game that features a base-building system that is even more robust than The Forest.

Players are encouraged to build their bases while defending them against the walking dead and the occasional shooting alive. Muck like The Forest, survival becomes easier with friends, which is what a significant portion of the game is about. The safer your base, the more people will want to join in on the zombie bashing fun.

5. ‘Legend of Zelda: Breath of the Wild’

Another Nintendo game that helped drive sales of the Switch into the stratosphere. Breath of the Wild is a departure from traditional Zelda games in several ways, chief of which are the survival elements developers added to the title.

Gone are the day's Link can recover his health by breaking a pit with a heart inside. In order to survive in this post-apocalyptic Hyrule, Link must hunt, forage and cook to stand a chance. And unlike some of the other games on this list, the enemies Link faces don’t just rely on strength and numbers to best the hero. Much like in The Forest, enemies are smart and act as if human players are controlling them.

An already popular game made even more so because of the current pandemic lockdown, Animal Crossing: New Horizons takes elements of The Forest and completely removes the life or death stakes. What’s left is a cutesy game that emphasizes crafting and a robust base-building feature. If there are survival aspects in Animal Crossing they are implied, rather than explicitly stated like in The Forest. Why else would Animal Crossing emphasize fishing, foraging, or house building if the characters didn’t eat or need shelter?

All jokes aside, Animal Crossing is a smash hit that often catches new players off guard by how engaging it is, another similarity it shares with The Forest.

With perhaps one of the rockiest initial few months, No Man’s Sky has come a long way since its 2016 release. Few games on this list wear their Minecraft pedigree as proudly as this space sim that requires each player to brave an alien world in order to build bases and repair their ships. To this end resource collection and management, much like The Forest, is key to success. Exploration is an important element in both games, though No Man’s Sky has a slightly larger sandbox and with improvements, the developers have tacked on, after the fact, No Man’s Sky is sure to provide players with hours of fun.

A AAA title that is part of a successful franchise, Far Cry Primal’s similarities with The Forest are likely coincidental. It’s doubtful the developers had The Forest in mind when putting together the survival mechanics of placing the player in the middle of a territory war between a handful of different tribes. Whether intentional or not, though, the similarities are there for those who wished The Forest was a bit more fast-paced.

To say that Fortnite has changed would be an understatement. The game as it existed when first released in "fdasfdas" was a shameless Minecraft clone. Then it switched from emphasizing survival to combat and went on to become, much like its inspiration, a genre-defining game.

But before that, Fortnite was a survival game that, like The Forest, required players to horde supplies to better themselves against hoards of enemies. As a survival game it doesn’t quite measure up to The Forest but its eventual success earns it a spot on this list.

One of two games on this list that hopped bandwagons. While its sequel is a battle royale game, the original S.O.S is ostensibly a survival game, which puts over a dozen players on an island teeming with creatures of varying strength. Players are equally encouraged to cooperate or backstab to be victorious. While the hunt for supplies isn’t as key of an element on this game as it is in The Forest, it is present with players have to find weapons, mangoes, and other items. While a bit more whimsical than The Forest, both games are solid entries in the survival genre.

A survival game that emphasizes both player and computer enemies. The survival element is similar to The Forest. Players have to constantly scavenge for supplies. Both games also feature hunger meters. While scum emphasizes combat, the only significant difference is SCUM allows players to use more advanced weaponry.

For a time, Ark: Survival Evolved was the Minecraft Killer. The game's popularity was propelled by YouTubers and streamers who were drawn to the concept of a survival game in which you could catch and use dinosaurs like pokemon.

The game is much more than that, however. Crafting and building are as simple as it is in The Forest but the things you can craft tend to be a bit more fantastical. Endgame loot includes all sorts of futuristic tech. For a more outlandish take on The Forest, this is the game for you.

Rust isn’t for everybody. Even hardcore survival veterans might find it a bit tedious but, much like The Forest, when things are good, the game came to be rewarding.

This one might raise a few eyebrows but just hear me out. Yes, finding bigfoot is not, technically, a survival game, at least not in the traditional sense. There is no resource gathering or management systems, no crafting, and the bulk of the items you need you’re given at the beginning of each game.

But for all the differences between Finding Bigfoot and The Forest, there are as many similarities. Both games take place in a forest and both games pit you against beings that can kill you, given the proper circumstances. That coupled with the fact that the atmosphere of each game is almost identical. Fans of The Forest will undoubtedly take a liking to Finding Bigfoot.

Let’s get this one out of the way. Conan Exiles is, perhaps, the most controversial games on this list, due in large part to the optional nudity, coupled with the game’s...detailed character creation options. It garnered ridiculous amounts of attention when first announced and managed to build a significant player base even before coming out of Beta.

The game, however, is more than its naughty bits. It features survival elements, including base building, while heavily featuring fantasy elements. It’s a fine option for when you're done making your way through The Forest.