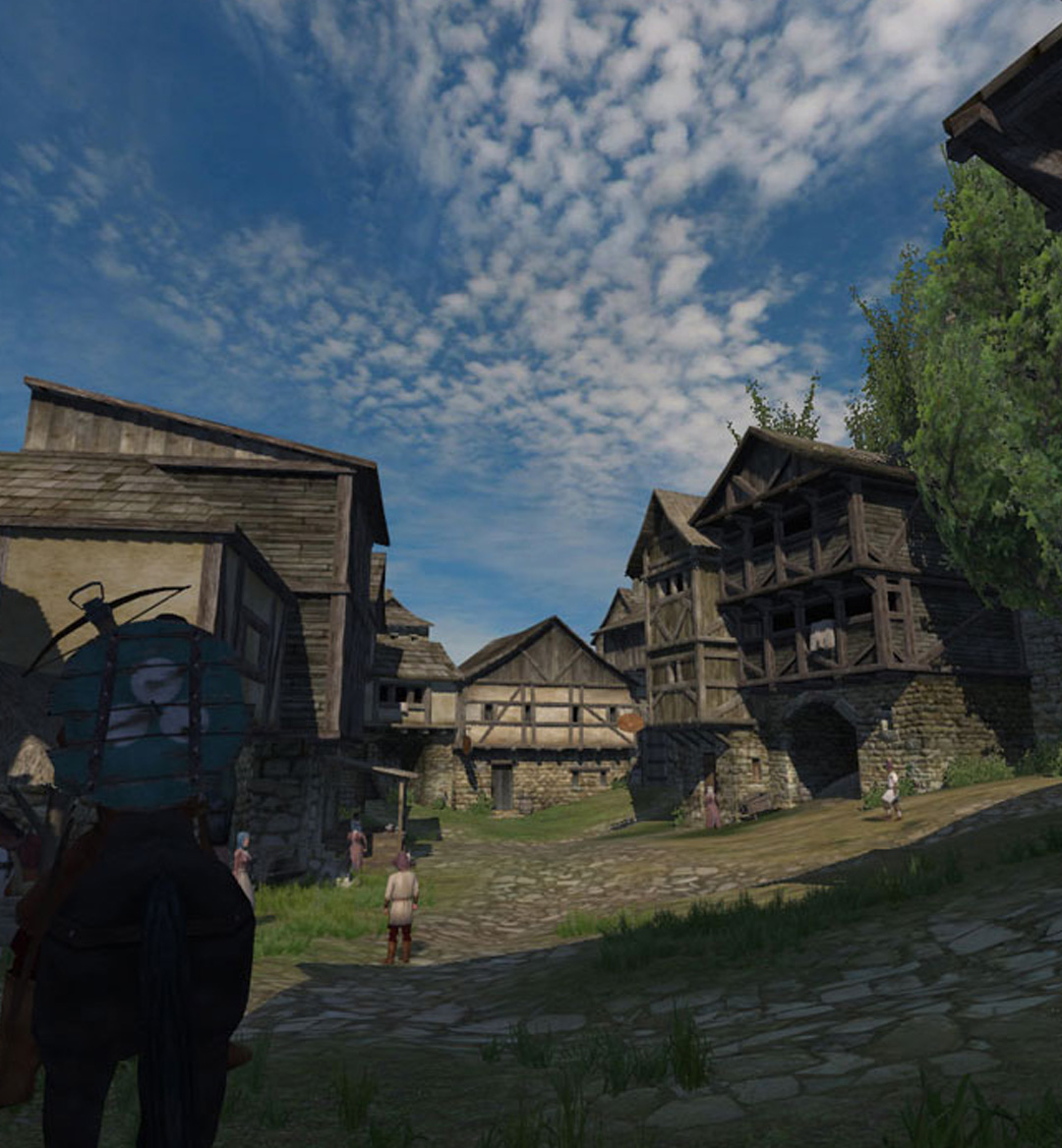 The medieval mayhem that’s regularly on display within the Mount & Blade series is incredibly enjoyable whenever you’re playing it.

Both the original release and its Bannerlord sequel have captured a wide swath of gamers’ attention thanks to an innovative combat system, open-ended approach to character progression, and massive open world. Modders have also taken quite the liking to the series and injected a bunch of elements into it to keep its dedicated community satisfied.

The thrills derived from the Mount & Blade series can be found in other equally entertaining games. If you’ve been on the lookout for interactive experiences that take place within a medieval setting, allow us to present you with 12 essential picks. The games listed below feature the type of mechanics that let you explore a vast open-world, engage in epic solo & multi-man battles, and claim supremacy over the opposition.

Kingdom Come: Deliverance puts you on the path of vengeance as you play as Henry, a young man who sets out to punish the invaders that killed his parents. You’ll inhabit the European region of Bohemia and meet the most notable real-life figures tied to this game’s historical time period. The journey at the heart of this title can be tackled however you see fit – the choices you make throughout it impact everyone that encounters you. And most importantly, the first-person viewpoint for this action RPG will bring you all the closer to its impressively realistic combat system.

If games like Mount & Blade and Age of Chivalry captured your imagination, then Chivalry: Medieval Warfare should do the same. This multiplayer-focused sword and shields simulator gives you a whole lot of soldiers to hack & slash, castles to besiege, and villages to pillage. Up to 32 players can enter the online arena within this medieval gem and clash with an arsenal that includes over 60 weapons. Chivalry: Medieval Warfare is a first-person melee experience that will be a surefire hit among you and your real-life online chivalry.

Just like the last pick on this list, MORDHAU is a first-person battle arena game worth checking out. Keep in mind that you can also dish out some damage from a third-person viewpoint, so consider your camera preference once it’s time to cut down your foes. You can fight for your life in small-scale battles or throw yourself into some intense warfare via 80-player filled modes. The brutality in this game is expectedly off the charts and you’ll never tire of spilling pints of blood during every monumental conflict.

Ubisoft stepped out of its open-world comfort zone for once and ended up producing one of the more interesting takes on the fighting game genre with For Honor. While this game features a fully realized single-player campaign, its best elements are definitely present within its multiplayer mode suite. Players can pit soldiers and legendary warriors from four historical classes against each other for some fantasy warfare. Samurai, Vikings, Wu Lin, and Knights come to battle it out and see who’s truly the strongest in battle. In its most current form, For Honor feels fully complete and offers its fanbase an overwhelming array of things to do. Master this game’s intricate combat system and you’ll quickly fall in love with the rest of its war fueled madness.

This game’s predecessor (Middle-earth: Shadow of Mordor) is amazing in its own right due to its revolutionary Nemesis System. Middle-earth: Shadow of War ups the ante by giving Talion the ability to recruit the Uruks and Ologs he needs to build a powerful army. This Lord of the Rings inspired adventure takes you all over its dark world as you look to conquer Sauron’s forces and cut down his most fearsome fighters. You can even attempt to take down other players’ fortresses by hopping online with your orc alliance in Social Conquest mode. Middle-earth: Shadow of War lets you play out the type of awe-inspiring, big screen crusades that the Lord of the Rings films wowed audiences with.

The medieval fantasy, action RPG classic that’s practically available on every console is still worth playing in this day and age. While it may not have a whole lot of army building and giant skirmishes to enjoy, The Elder Scrolls V: Skyrim makes up for it with arduous battles with dragons and all sorts of fantastical beings. There are tons of citizens to interact with, factions to join, and engrossing side-quest storylines to play out in grand fashion. Mastering Skyrim’s fierce first-person melee/magic battle mechanics is pure joy, especially when you deliver pain with your custom dual-wielding setup at the ready.

Sega’s outstanding strategy RPG series comes from the celebrated development studio known as Creative Assembly. The Total War games have delved into Japanese, Vikings, and Roman-themed sagas. One of the more notable series entries that give you total command over a medieval state and its forces is Total War: Medieval II. The campaign tasks you with conquering other factions as you play as one of the other 17 that also vie for supremacy. If you’re not too keen on the many complexities that go into maintaining an entire region, you can hop right into the game’s vicious real-time battles instead. Strategic medieval warfare is at the core of this highly recommended pick.

This satirical take on the strategy RPG genre is definitely worth a look. Madness ensues as you take your brave warriors into battle to bash their enemies to bits. Prepare yourself to belt out a few laughs as you witness this game’s over the top ragdoll physics send its victims flying all over the battlefield. There are 12 factions to become acquainted with and one of them is of the medieval kind, of course. You can create custom battle scenarios, create your own units, and even enter battles for yourself from a third- or first-person perspective. Totally Accurate Battle Simulator is a light-hearted and super endearing battle sim that’s hard to put down.

Gloria Victis hangs its hat on its realistic presentation of medieval times. It’s described as a fun mix between Mount & Blade and Planetside 2, which should entice many of you to check it out for yourself. You can choose to become an active fighter of some kind and navigate the game’s expansive world however you see fit. Duels break out on the regular, sieges erupt into pure mayhem, and guilds battle for castle ownership more often than not in this quality MMORPG. Gloria Victis is as close to replicating the storied medieval era experience as the other games on this list.

Knights of Honor upholds the strong legacy established by the other medieval strategy RPG’s that flood the PC gaming market. You’re put in the position of a proud king who looks to grow his kingdom into the grandest in the land. Expanding your influence goes hand in hand with exercising your military might, which means you’ll get to make use of your loyal knights to claim victory alongside the rest of your troops. Managing your alliances and tending to a slew of other diplomatic duties is fun and all, but Knights of Honor’s high replay value truly lies in its momentous army clashes. Do your best to become the supreme emperor of Medieval Europe as you play as one of the game’s 100+ power-hungry kingdoms.

This next pick on our list is another real-time strategy game that has a specific focus on castle management. You’ll need to put forth a gargantuan effort as you design and build your own towering structure in a bid to put your military might on full display. Stronghold HD lets you participate in massive bouts of medieval warfare against the AI and online strategists, so you’ll always be busy causing destruction in a revised HD format. England needs your assistance in beating back the dreaded Wolf, so be a proud countryman and supply them with your army’s aid.

Everyone and their grandmother have played The Witcher 3: Wild Hunt at this point, right? If for some reason you skipped it, do yourself a favor and immerse yourself in the grand adventures of Geralt of Rivia ASAP. In its most current state, The Witcher 3 features an incredibly engrossing main campaign and two expansions that are equally entertaining. The medieval fantasy themes that prop up this classic action RPG are of the mature kind, so you’ll easily get wrapped up in its deeply moving main plotline and abundance of side stories. The Witcher 3 has swords, magic, political intrigue, sex and so much more to keep you engrossed from start to finish. It’s hard to deny all that is all we’re saying.

15 Games Like ‘Skyrim’ That Are Perfect For Any RPG Fan

25 Games Like ‘World of Warcraft’ All MMORPG Fans Must Play