15 Games Like 'Skyrim' That Are Perfect For Any RPG Fan 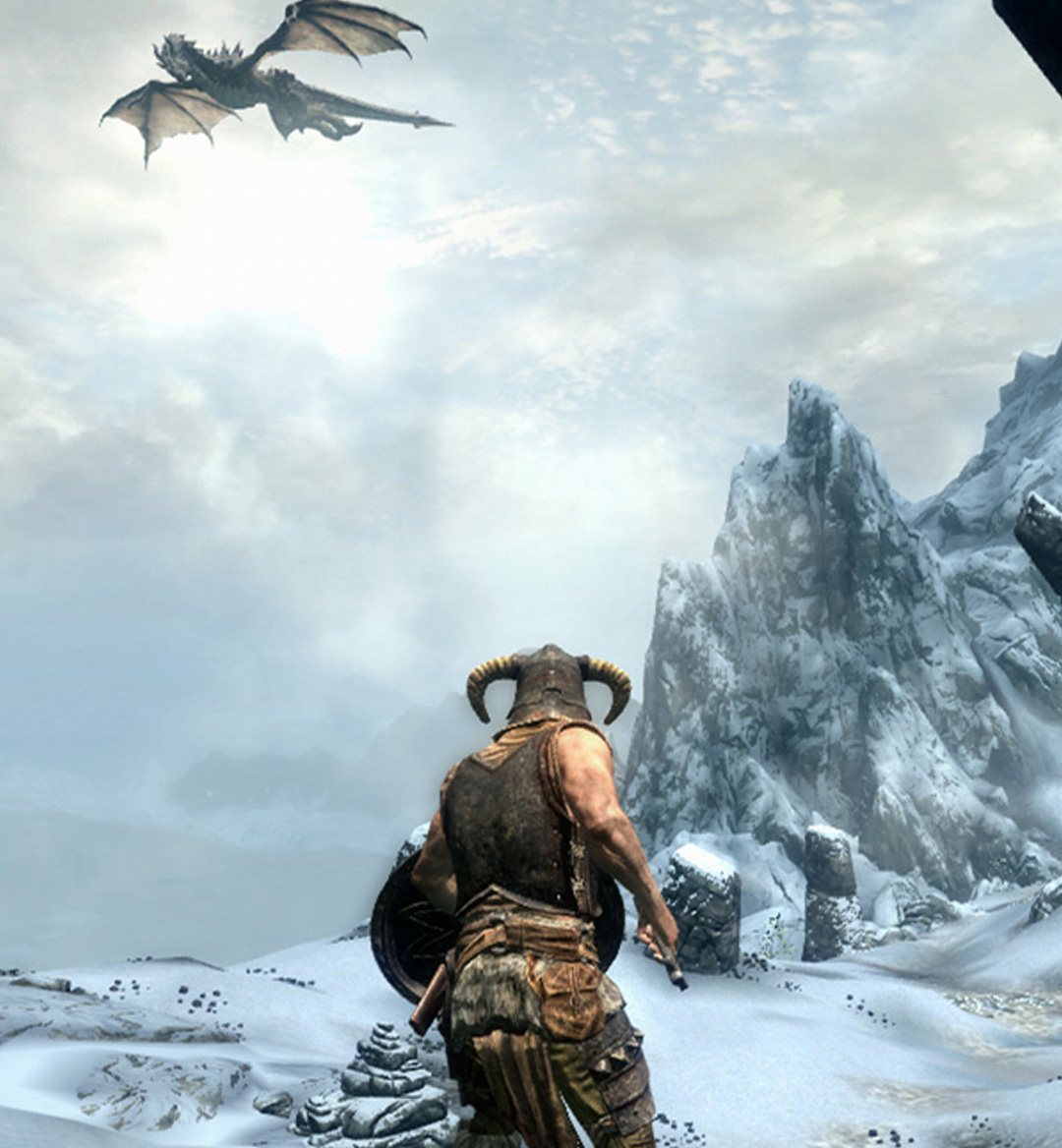 If there’s one game that can compete with Resident Evil 4 for the honor of being ported to the most consoles, it has to be The Elder Scrolls V: Skyrim.

Since launching in 2011, Bethesda’s open-world dragon hunting ARPG has appeared on PC, PS3, Xbox 360, PS4, Xbox One, and Nintendo Switch. Millions of gamers around the world have journeyed through the land of Skyrim to take on an overwhelming array of quests, venture through a dizzying amount of locales, and do battle with all sorts of human/non-human threats. Skyrim is classified by many as a game that’s stood the test of time thanks to its amazingly high replay value. It wouldn’t come as much of a surprise to hear that some gamers still haven’t completed its main story since the game’s side content offers so much more to see and do.

There’s a vast collection of games out there that offer the same fulfilling experience as Skyrim. If you’re looking to explore fully realized open worlds, confront massive creatures in hard-fought battles, and save the world from certain doom, then the following 15 games are definitely worth a try.

If Skyrim captured your imagination and left you yearning for another round of The Elder Scrolls, then it’s worth revisiting its predecessor. The game we’re speaking of is held up as one of the greatest RPGs of all time, The Elder Scrolls IV: Oblivion. You’ll get to take your custom hero into a world ruled by all manners of wizardry as you attempt to thwart the evil plans of a fanatical cult. Oblivion’s signature combat mechanics should be familiar to you after your time spent with Skyrim, so you’ll already have the tactical knowledge needed to vanquish fantastical foes.

What we have here is another highly regarded RPG that’s simply a must-play for fans of medieval fantasy. The Witcher 3: Wild Hunt places you in the boots of a slick-talking monster slayer named Geralt of Rivia. Your main mission puts you on the trail of Geralt’s missing adopted daughter, who happens to be on the run from an overwhelming threat. As you carry out your search, you’ll get embroiled in a myriad of engrossing side quests, engage in some spicy conversations, and battle it out with formidable opponents. The Witcher 3 offers 100+ hours of worthwhile content, so it’s easy to get sucked into Geralt’s unforgettable adventures.

To this day, diehard fans speak favorably of this Capcom action RPG. And that’s because the definitive edition of Dragon’s Dogma adds some extra polish to an already amazing game. Dark Arisen offers a number of graphical and mechanical enhancements while retaining everything else that made the original so memorable. You’ll set out on a grand revenge mission as you attempt to kill the dragon that literally stole your heart. As the “Arisen,” you’ll master all types of battle classes and employ the aid of helpful Pawns along the way. Dragon’s Dogma: Dark Arisen features the type of combat that feels impactful at all times, so you’ll always get a kick out of hacking and slashing monsters alongside your AI partners.

BioWare’s Dragon Age IP reached the pinnacle of action RPGs with the release of the third game in the series. Dragon Age: Inquisition puts the fate of the world on your shoulders as you build an army in an attempt to save the continent of Thedas from an all-powerful darkspawn. As the game’s “chosen one,” you’ll have to make the types of decisions that help you gain influence across the land and impact your most important relationships. Taking down the opposition means you’ll utilize a fun combination of action and turn-based battle mechanics. Be the best leader you can be and relieve Thedas of its evil machinations in this bonafide classic.

The threats you’ll confront in Kingdom Come: Deliverance are not of the medieval fantasy kind. Instead, you’ll clash swords and shields with historically accurate threats within the storied Kingdom of Bohemia. This pick on our list will surely grab your attention due to its mature storytelling, non-linear approach to quest completion, and challenging combat encounters. Kingdom Come: Deliverance takes The Elder Scrolls’ winning formula and meshes it with a more realistic interpretation of ye olden times.

Shout out to THQ Nordic for reviving this super slept-on action RPG. The creative minds of R.A. Salvatore, Todd McFarlane, and Ken Rolston came together to offer their own take on the elements familiar to Elder Scrolls fans. What followed was an immense open-world undertaking that was rich in storytelling, character customization, and compelling combat. This remaster brings back the 2012 original with all of its DLC included, so fans and newcomers alike will have plenty to do in the realm of the Faelands.

7. ‘The Legend of Zelda: Breath of the Wild’

Before Breath of the Wild became a reality, its core fans cried out for a true open-world experience set within the kingdom of Hyrule. Once the Nintendo Switch launched in 2017, those same fans got their wish with one of the greatest launch games and Legend of Zelda titles of all time. Like The Elder Scrolls before it, Breath of the Wild throws players into a vast world littered with an abundance of missions to accomplish. Your journey on the road to defeating Calamity Ganon can be handled in a non-linear fashion, so you can choose to become as strong as possible for the final battle or confront such evil from the very start of your adventure.

The Elder Scrolls’ foray into the crowded MMORPG space didn’t start out so hot. But thanks to the continued work and dedication from ZeniMax Online Studios, The Elder Scrolls Online morphed into something incredible. The game’s name change came with a series of welcome system updates and expansion packs based on iconic series locales. You have the option of creating the hero of your dreams, aligning with a band of loyal warriors, and taking the fight to the Daedric Prince Molag Bal.

If there’s one thing these two classics are known for, it has to be the revolutionary Nemesis System. As you clashed with high-ranking Uruk officials, they’d remember your previous transgressions and react to them during future battles. This mechanic created a cool gameplay loop where your victories and defeats would lead to heated rivalries. Middle-earth: Shadow of Mordor and its sequel Middle-Earth: Shadow of War are easily the best-licensed Lord of the Rings games. The Batman: Arkham inspired combat, Nemesis System, and Followers mechanic from the sequel provide limitless servings of gameplay value.

Taking the fight to massive dragons across The Elder Scrolls series never grows old. But if you’re in the mood to link up with some hunters and get embroiled in even bigger monster mashes, then Monster Hunter: World should whet your appetite. The mission objectives tied to this game are as follows – accept quests, gear up, eat well, join a party, and set out on a monster hunt. And once you find your desired target, the best part of Monster Hunter: World truly begins. There’s so much content to keep busy within this massive action RPG. The base experience, Iceborne expansion, and wealth of incremental updates are responsible for Monster Hunter: World’s immense staying power.

If there’s one entry within the Risen series you need to check out, it’s the first one. That’s because it allows players to stay within the realm of medieval fantasy adventures instead of pirate-based ones. You’ll be placed on the island of Faranga, which is under duress due to fearsome beats and constant earthquakes. Mastering the art of the staff or tapping into your mage-based powers are the two elements that lie at the heart of the game’s quality combat system. Risen will give you a near-limitless array of side quests to get sucked into and major choices to consider, so you’ll certainly get your money’s worth out of this 2009 throwback.

It may be hard to fathom, but Ubisoft actually dabbled in the first-person, ARPG sub-genre back in the day. And what’s even crazier is the fact that Arkane Studios of Dishonored fame developed their medieval fantasy experiment. This joint project ended up working as a whole, thankfully. The best version of this game on our list is Dark Messiah of Might & Magic: Elements, which adds more meat to the game’s single-player campaign bone, refines its multiplayer mode and fixes numerous bugs/glitches. Fans of the Might & Magic universe speak highly of this game, so take their word for it and check this one out.

The Elder Scrolls is jam-packed with goblins, vampires, dragons, and plenty more fantastical baddies. Horizon Zero Dawn does things differently by pitting you against mechanized interpretations of members of the animal kingdom. You’ll take on the role of a hunter named Aloy, who sets out to discover her origins while exploring a vast post-apocalyptic world. While you won’t be running headfirst into battle with swords, shields, and magic staffs, you’ll be able to defend yourself from a huge variety of mechanized threats with arrows, explosives, and traps. Horizon Zero Dawn is practically The Elder Scrolls set in a post-apocalyptic setting filled with robots you’ll certainly enjoy hunting.

One of the biggest launch titles for Sony’s next-gen PS5 console is a full-fledged remake of Demon’s Souls. And if you’ve kept up with the rise of the “Soulsborne” sub-genre, then you should have an inkling of what this remake entails. This revival of the revered ARPG features an impressive graphical sheen while retaining the best parts of the original. The character creation feature has now been expanded, plus the game’s new Fractured World mode lets you reverse the layout of its gorgeous environments. And of course, the high difficulty the original is known for is back in full form. Prepare yourself to die countless times and enjoy every minute of it when you step into the dark kingdom of Boletaria.

Bethesda’s other iconic first-person ARPG franchise is Fallout, which is all about fighting for your survival within a world stricken by nuclear warfare. Fallout 4 builds upon the strong foundation of the third game in the series and its New Vegas spinoff by refining the V.A.T.S. combat mechanic and giving you so much more to do and see. The newest feature introduced in this sequel is base building, which lets you craft a fort of your own and protect it from outside threats. Fallout 4’s world is a dangerous one, but you should be okay if you keep Dogmeat and your trusty Overseer’s Guardian nearby.