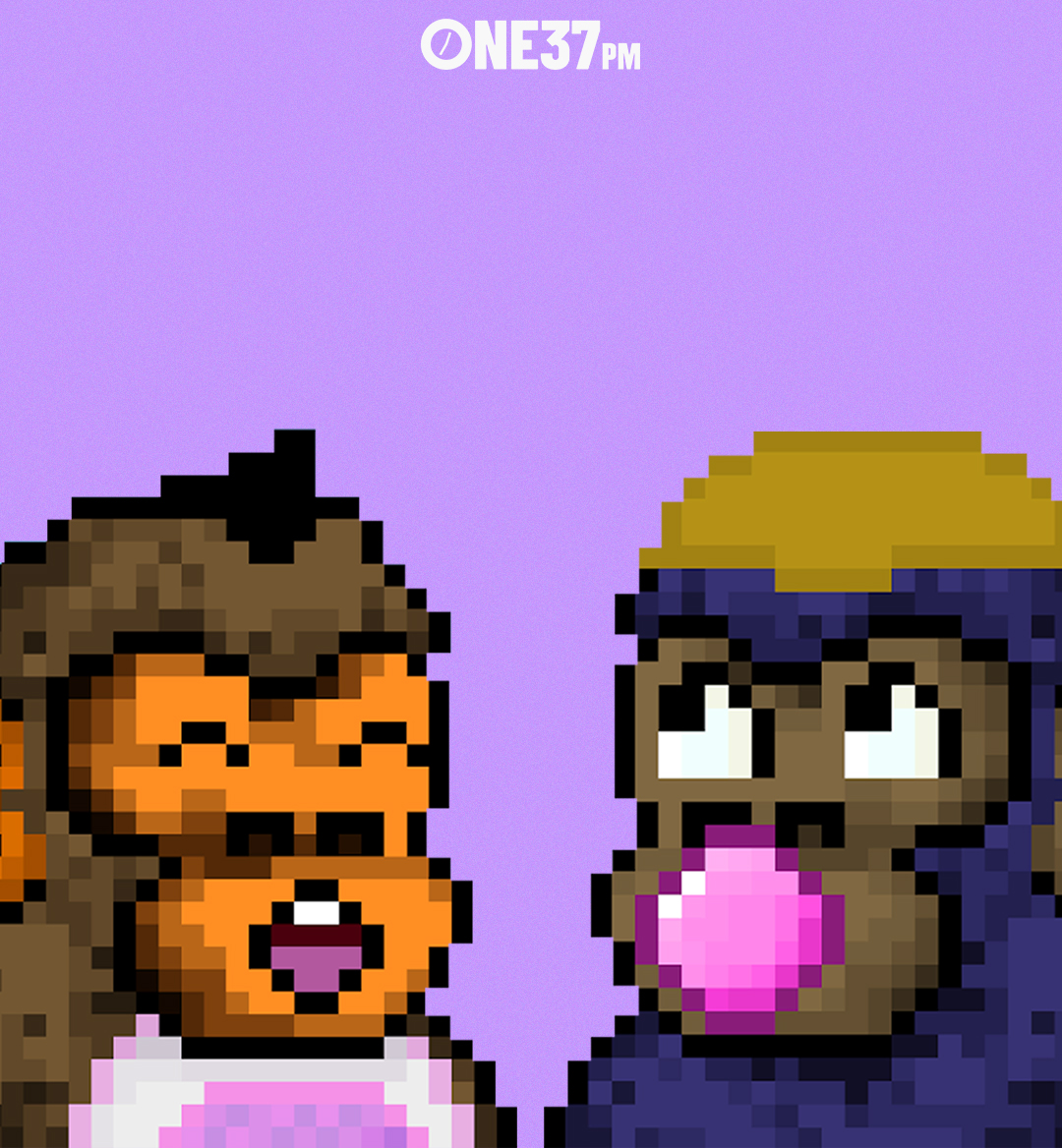 This weekend was red hot in the world of NFTs and Web3.0. Between announcements from Tom Sach Rocket Factory to a crazy floor jump for Damien Hirst's "The Currency," here are a few moments from this past weekend to look into.

And if you're just tuning in, this is ONE37pm's newest column, NF3, where we recap 3 of the most intriguing moments in the world of NFTs as they unfold.

Big thanks to everyone who got CyberKongz VX!♥️

There were some hickups right after the mint but we got it all worked out!

If you want to buy CyberKongz VX on secondary market, please make sure you buy from the correct collection:https://t.co/yuvSDKClCV

If you don't yet know CyberKongz, here's an intro from the project's website:

"CyberKongz are unique and randomly generated 2D/3D NFT Social Avatars for your online experiences. Some appear normal. Some look weird. Some are just damn cool! Maybe some even look familiar!"

Part of what differentiates the Kongz from other similar generated projects is the avatars' integration into a metaverse as digital avatars. This weekend, they launched CyberKongz VX and 10,000 were available to mint, burning more in ETH fees than OpenSea and Uniswap combined in 24 hours. Insane. Read more about the project here.

🔥 @CyberKongs burns more in ETH fees than OpenSea and Uniswap in 24 hours! 🔥

You are formally invited to the Inaugural Rocket Launch in NYC, August 28, 2021 read more here: https://t.co/vqxR3c3p60

The legendary visual artist Tom Sachs (known for designing one of the most expensive sneakers of all time, among other things) launched his NFT project back in mid-July. This past weekend, he announced the launch event for the project (a bit of a double entendre), which will take place in NYC on August 28th.

Beginning tomorrow, owners of the project can apply on the website to be one of the First Ten Rockets launched, but only if they have assembled at least one rocket. This project built up a lot of steam before the launch was announced, and now we're finally going to be able to see some of the tokens in action.

This is also just the first of many future benefits and utility associated with the Rocket Factory NFTs.

woke up and the floor on @hirst_official is 3 sales away from 12 eth. I believe this is entirely because I told @hunterorrell's friend to buy on Friday when they were 3.5 eth and he didn't. #tropoKnowshttps://t.co/7eusppS8Lz

Damien Hirst is one of the most recognizable artists in the world, and this weekend, his project "The Currency" absolutely soared on OpenSea, reaching a floor of nearly 10 ETH at the time of this writing. Unlike some of the other moments on this list, this explosion can't be traced to an announcement from the project. Rather, the rise seems to be the result of a culmination of interest in the project from collectors.

It's a neat project aesthetically, and they intend to return some of the profit from the project back to the NFT community.

@hirst_official and HENI intend to use a substantial portion of the crypto receipts from The Currency drop to reinvest into the NFT ecosystem and community. More details about this will be released in due course. pic.twitter.com/A4PX26f71b

I'm curious to see if they will implement any utility or other benefits into the project at some point down the line. For now, "The Currency" exists as more of a traditional old-guard type of art project. Collectors are getting into it because of their interest in the piece as a work of art; there's definitely still room for these kinds of projects in the NFT world.

One of the interesting differentiators of Hirst's collection is how it could exist as either a physical work or digital. Successful applicants to the project (when it launched in July) all received NFTs. However: "Ultimately, you have to decide between the digital NFT or the physical artwork, both of which are artworks in their own right. Whichever you pick, the other gets burned."

This factor operates as a bit of a social experiment; collectors had to decide if they wanted to bet on the piece as a physical work of art or as an NFT. As of right now, there are 1,130 on the OpenSea listing, so it seems people are opting for the physical work, at least for now.

This is a pretty sick graphic showing the overlap of ownership between collectors of some of the biggest NFT movers right now.

It's interesting to see which collections have more of an isolated owner-base (VeeFriends) versus which ones have owners invested in numerous projects.

This Wrapped Strikers project was rediscovered over the weekend with a few big names getting in on the action.

CryptoStrikers which are now sold as Wrapped Strikers

Rediscovery of old projects continues to be a big trend.

On Saturday, Bored Apes Yacht Club cryptically announced the next phase of their project.

There still isn't a ton of info available, but the floor for the project hit 15 ETH following the announcement.

OpenSea took down a verified Sad Frogs account this weekend because of a potential DMCA takedown request from Matt Furie, the creator of Rare Pepe—the inspiration for the project. 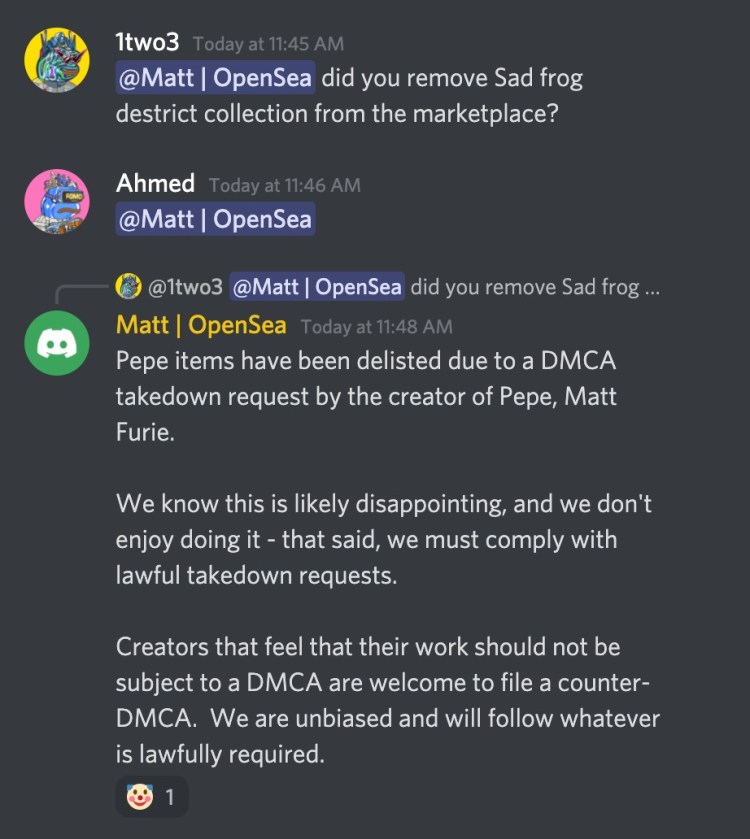 There's a lot more than just what we listed above happening in the world of Web3.0, so keep your eyes peeled and continue to do your own research. It's an exciting time to be in the game.