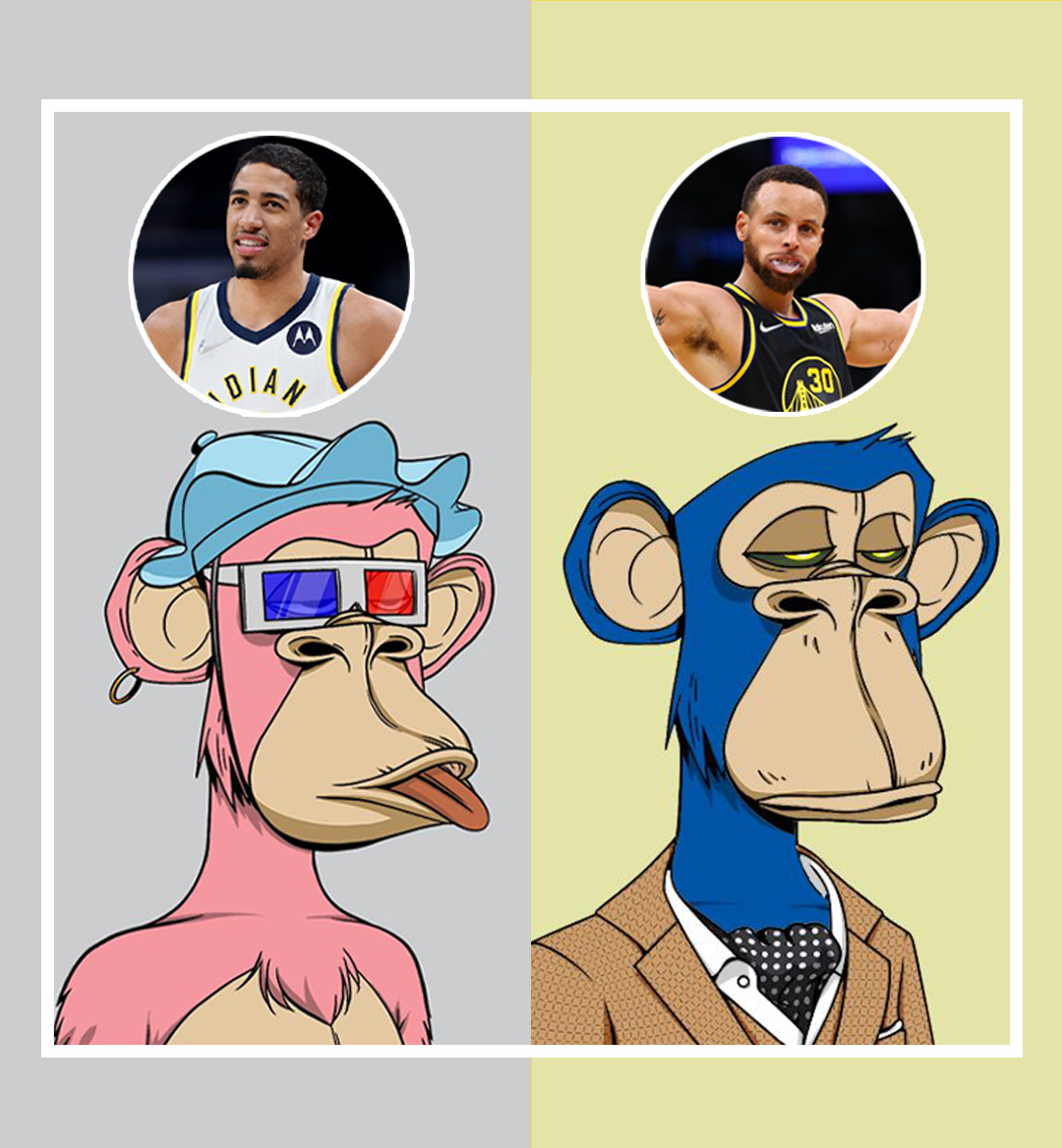 From the dominance of NBA Top Shot to Sorare’s partnership with the MLB, the intersection of NFTs and sports has been rich with innovation these past few years. While there’s many ways  to monetize the new technology, many athletes are approaching NFTs from a personal enjoyment stance.

In many ways, NFTs are the evolution of art collecting from the physical world to the digital world. Instead of hanging pieces on their living room walls, athletes are showing off expensive art purchases through Twitter and other social media platforms. Here’s an abbreviated list of some professional athletes who enjoy collecting NFTs.

In addition to changing his profile picture, Sacramento Kings guard Tyrese Haliburton took to the hardwood to showcase his $140,000 Bored Ape purchase. Andrew Lewis, a prominent shoe painter in web3 circles, hooked up Haliburton with a custom Bored Ape pair of Kobes ahead of a win against the New Orleans Pelicans.

Haliburton recently starred in Bleacher Report’s ‘Next 25’ segment discussing his foray into NFTs.

“I was bored in my hotel room and I tweeted something like ‘dang, I missed the boat on Top Shot. My moment went up $5.’ Went to the team meeting, came back, and it was up like $50,” Haliburton says. “From there, I became obsessed with this stuff.”

In addition to his Bored Ape, the Kings guard is a proud Azuki NFT owner and holds a few pieces from the Rumble Kong League. 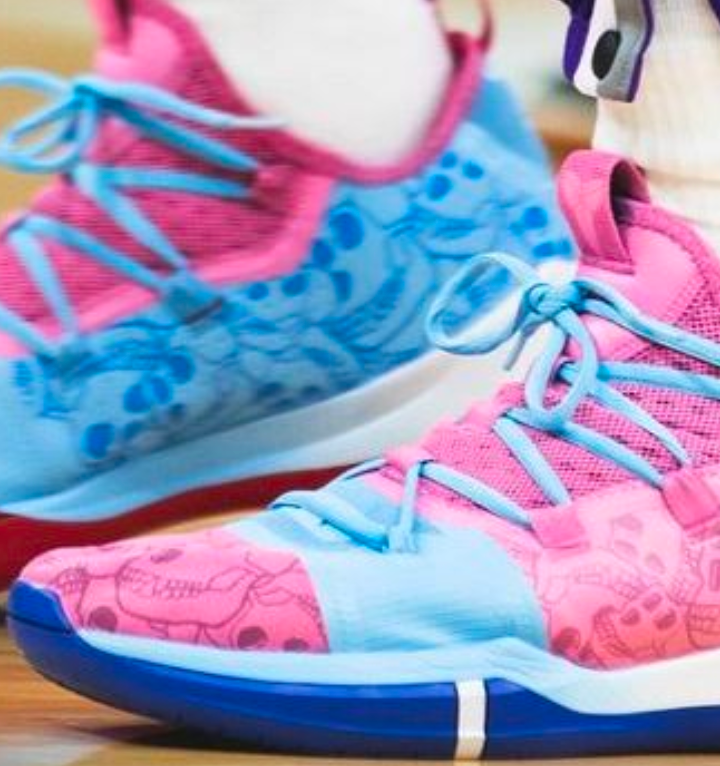 After her World of Women NFT purchase, Collier says that “right away, they bring you into their community. Immediately, people are following me on different social media platforms.” She credits the inclusive mission behind the World of Women project for her purchase. 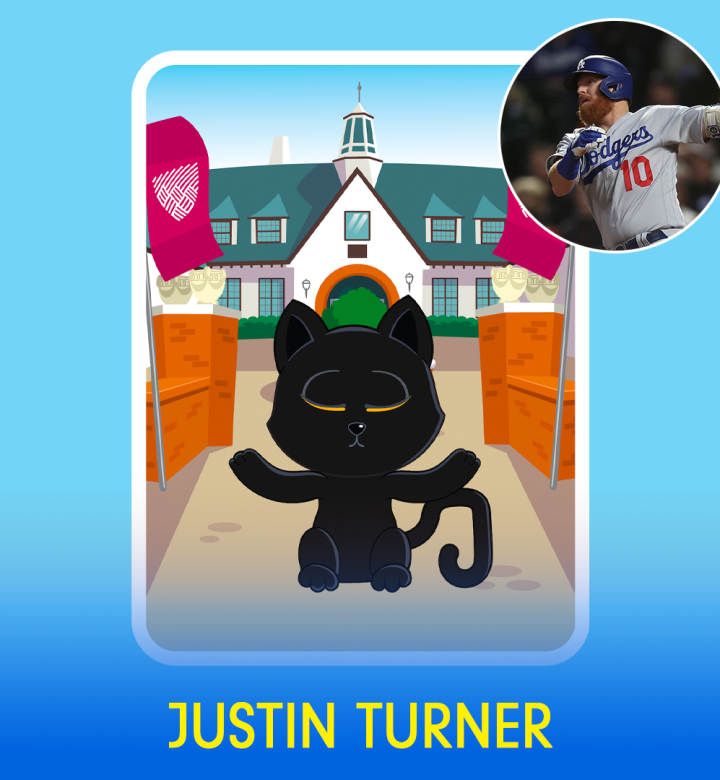 In one of the more creative ways athletes have used NFTs, Dodgers third baseman Justin Turner released a free NFT for all fans that voted for him in the 2021 MLB All Star Game.

Been diving into #NFTs these last few months and have been having a blast. Decided to hop in with my own FREE NFT that you will receive if you vote for me for the All Star game. Check out the instructions for details! https://t.co/gAZAKYHgTd@vaynersports @Dodgers pic.twitter.com/Rt5lJfOfuG

The MLB has taken quite a progressive approach to NFTs through their partnership with Candy Digital and Turner has been an avid supporter of the pairing. In addition to his many collectibles on the site, the third baseman has been active in the Discord.

Put together these 1 of 1 @vspass cleats for my guy @redturn2 for last nights NL West division title clinching game. Design for these was based off the holographic VaynerSports Pass NFT colors. pic.twitter.com/nlExjQyXRN 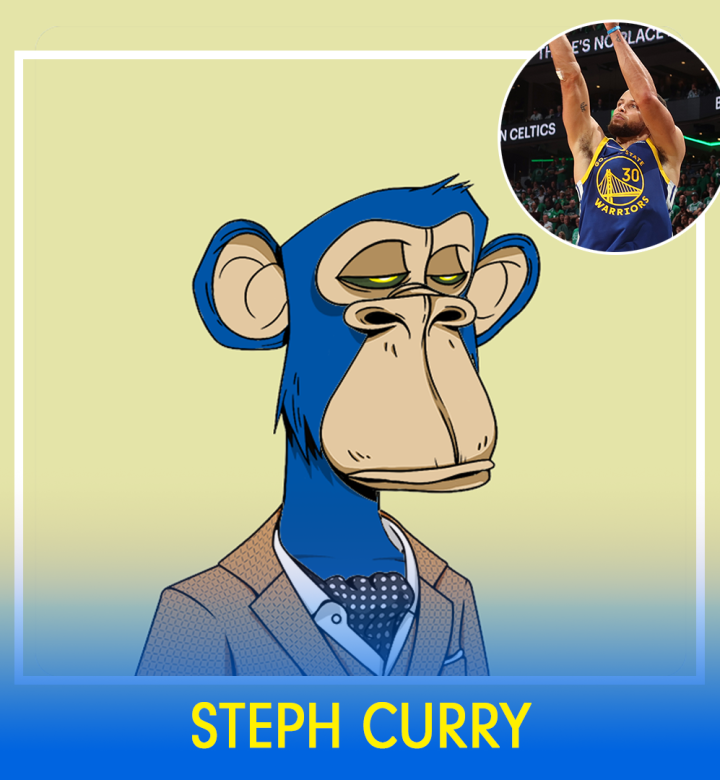 With an equity stake in FTX and an appearance in a commercial, it’s no surprise that the 2022 NBA Finals MVP is invested in NFTs. In partnership with the crypto exchange, Curry released the 2974 Collection — an NFT project celebrating every career 3-pointer the Warriors guard has made up through his record-breaking 2974th make.

We are happy to announce our newest member of the Chibi Dino family, @LAClippers, Terance Mann!
Looking forward to working with @terance_mann and his team as they look to explore and grow in the #Web3 Space! 🏀🦖 #chibidinos pic.twitter.com/qt2DaNzO6b

Mann entered a strategic partnership with Chibi Dinos — an NFT project with a collection of dinosaurs wearing basketball jerseys. Founder Sean Kelly and Mann spoke at the main NFT.NYC conference regarding IP and licensing in sports NFTs.

Mann also judged an exhilarating dunk contest at an NFT.NYC event held by Krause House DAO, a community with the goal of owning an NBA basketball team. 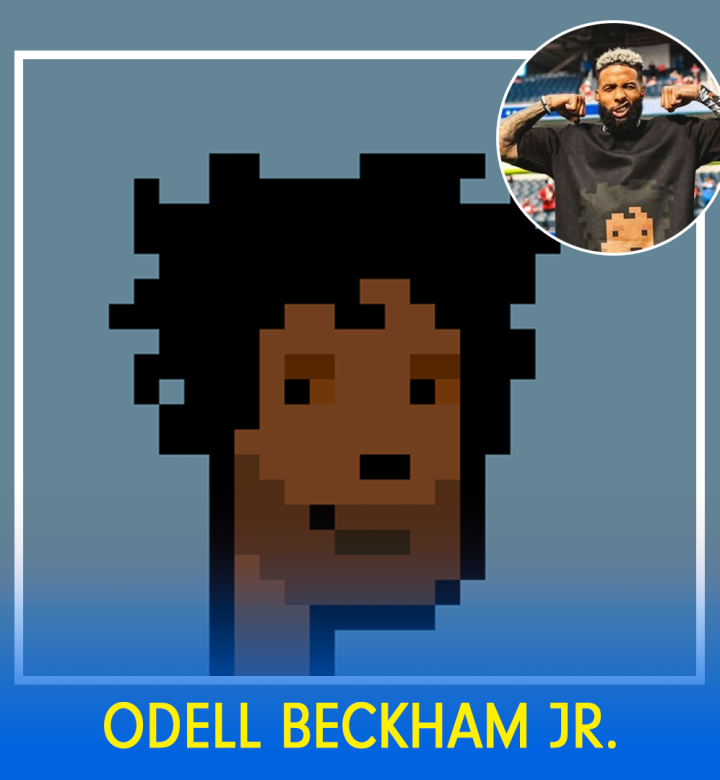 Our first NFL player on the list, Odell Beckham Jr. made shockwaves when he announced his decision to take his entire salary in Bitcoin for the 2022 season.

Beckham sports perhaps the most expensive NFT purchase on this list. His $2.2 million CryptoPunk purchase made an appearance on his t-shirt during a Rams practice. Perhaps the Punk gave the team good fortune as OBJ’s Rams won the Super Bowl just a year later.

10 lucky fans will soon have the chance to own an NFT of Beckham’s iconic one-handed catch against the Cowboys. NFL All Day, the NFL’s NFT platform, is releasing the moment as an exclusive collectible.

Self-proclaimed as having the best NFT collection out of all athletes, Portland Trail Blazers guard Josh Hart certainly has an impressive lineup.

Before we play tonight I just want to acknowledge my ape is better than @TyHaliburton22 #ApeMustKillApe pic.twitter.com/pZfmusTfye

Hart and Tyrese Hailburton are both Bored Ape owners and Haliburton purposely wore his Bored Ape shoes against the Pelicans — Hart's team at the time.

In the battle of the Apes, Hailburton pulled through with the victory, but the fun and infectious rivalry promoted the Bored Ape brand as a whole.

In addition to his two Bored Apes, Hart owns four Cool Cats and a Doodles NFT as well.

Both on and off the court, Serena Williams is an icon. As she dominates the field in her last U.S. Open tournament, Williams has announced a transition to full-time investing at Serena Ventures — a VC dedicated to empower underrepresented founders.

The firm has already made investments in multiple NFT-related startups including Nestcoin and Bitski.

Williams herself an NFT collector as well. Her husband and co-founder of Reddit, Alexis Ohanian, share a common love over NFTs and often gift them to each other. 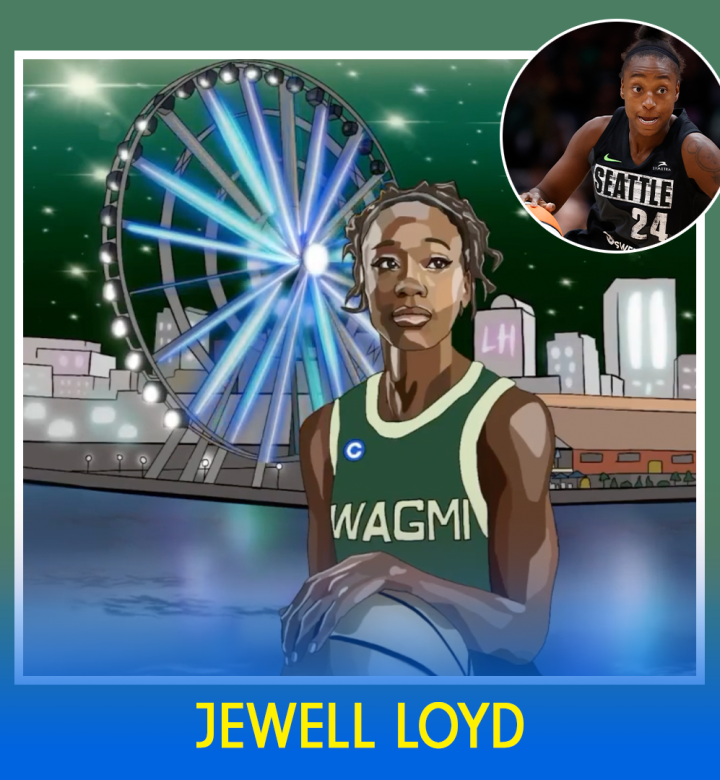 First with WNBA Top Shot and next with an in-venue experiment with POAP NFTs, the WNBA is proving to be one of the most forward-thinking leagues when it comes to NFTs.

Loyd was featured in Front Office Sports’ Crypto in Sports online course and gave rationale towards her commitment to NFTs and crypto moving forward.  “Crypto doesn’t discriminate,” she says. “I think that’s the beauty of it. It’s equal and it can be equal for everybody involved.”

Fans of Loyd can purchase her impressive highlights as NFTs on WNBA Top Shot. 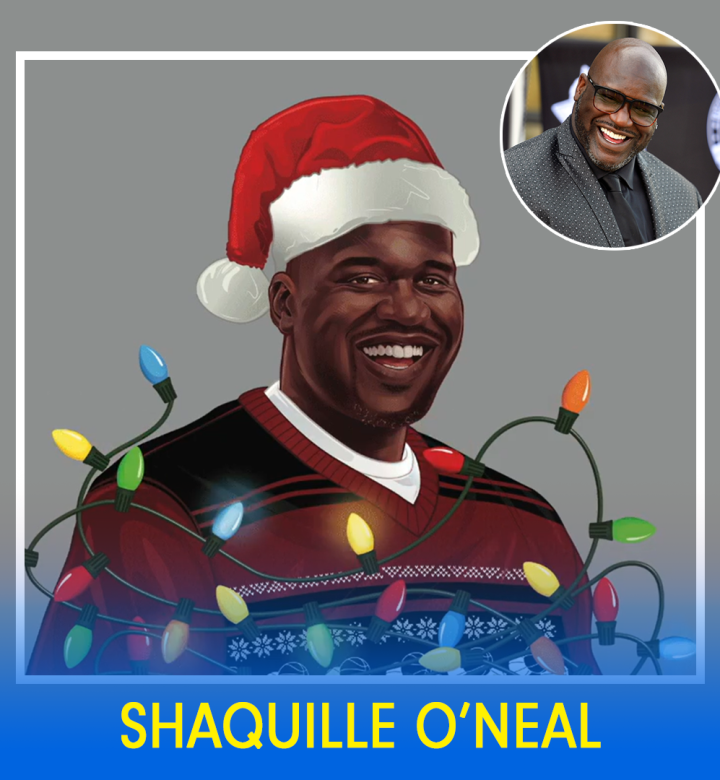 While this list has featured all active players up until this point, who better to bend the rules for than Los Angeles Lakers legend and Internet personality Shaquille O’Neal.

Shaq demonstrated the charity benefits of NFTs in his recent ‘Shaq Gives Back’ project. The collection features 10,000 profile pictures of Shaq that “capture his larger than life personality,” according to the OpenSea listing. The project found traction and raised over $2 million for the Shaq Foundation.

Owner of a DeGods NFT, a Rumble Kong League NFT, and many others, Shaq is also a personal collector of digital artwork and frequently shows off his new purchases on Twitter. 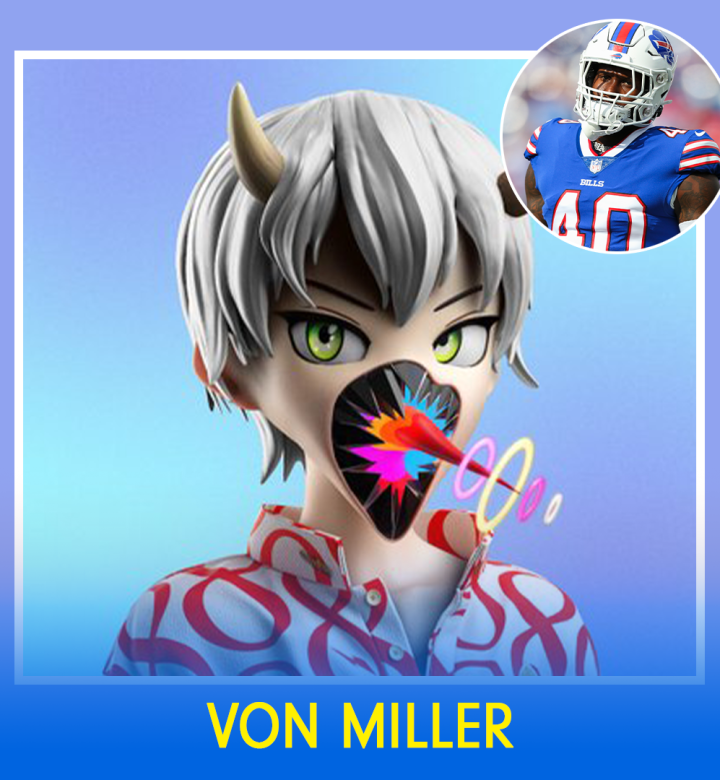 Last but certainly not least, Buffalo Bills Linebacker Von Miller has one of the most impressive NFT collections period, let alone amongst athletes.

Miller’s OpenSea profile — with the bio reading “I collect NFTs, I love crypto & I play football” — showcases a CryptoPunk, a Bored Ape, a Doodles NFT, four World of Women icons and 421 more NFTs

In addition to his collection, the 2022 Super Bowl champion has sold NFTs for both charity and fan utility.

Miller partnered with Personal Corner — former NFL star Dez Bryant’s NFT platform — to release a collection that changes based on his real-time on field performance. Fans who purchased these NFTs have a chance to win signed jerseys, equipment worn in game, and meet and greets.