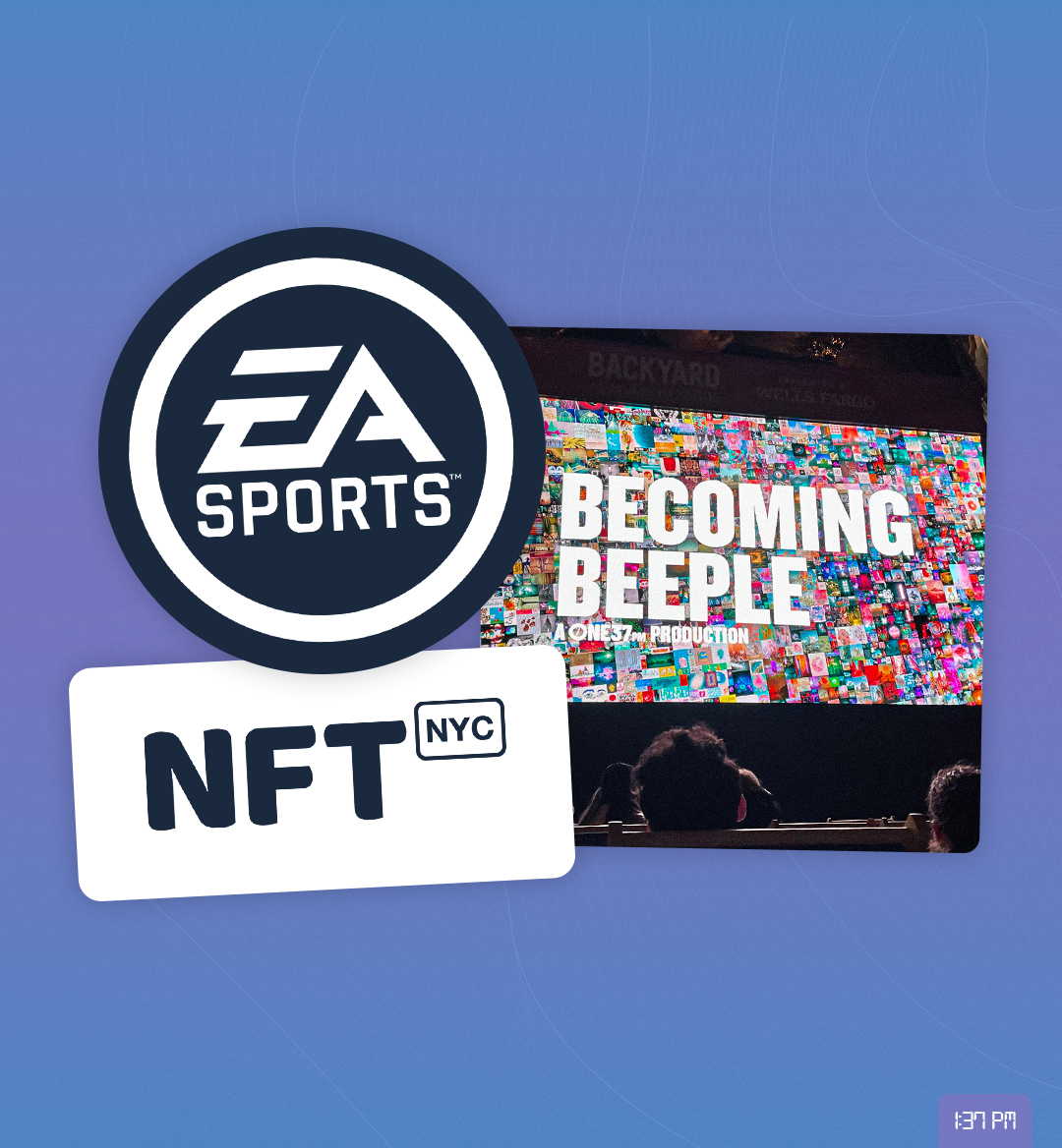 What a week it has been for the entire NFT community! First and foremost, we will be taking a peek at all that has happened this week with the presence of NFT.NYC. Also, EA Sports' CEO admits that NFTs will play a huge role in the gaming industry's future. Lastly, our own team here at ONE37pm premiered their first short film titled, Becoming Beeple. Check out all of that and more in today’s NF3 Recap.

If this is your first time joining us, remember that you can always stay up to date by viewing our most recent NF3 Recap. Without further ado, let's jump right in!

1. NFT.NYC proved to be a huge success

NFT.NYC proved to be nothing but a huge success for anyone who attended the week-long event, as well as the entire NFT community in general. This was the third year of NFT.NYC, and also the busiest year so far, attracting more than 5,000 people, along with a 3,000 person waitlist—according to organizers of the event.

I think it’s really cool to see the creators of these large NFT brands, such as Bored Ape Yacht Club, interact and provide value to members of their community in real life. On Sunday, BAYC hosted a party on a real yacht on the Hudson River in New York.

BAYC wasn’t the only popular NFT entity hosting events this week though. Artists like FewOcious hosted his own paint party to allow friends and fans to create their own pieces of art with FewOcious himself.

Overall, I’d say that NFT.NYC has been an extremely successful event—from the hundreds of guest speakers, to the community who showed up to support each other and learn more about the NFT space.

2. EA Sports announced NFTs will play a massive roll in the gaming industry

The ultra-popular game publisher EA Sports announced yesterday that NFTs are “an important part of the future of our industry.” A statement like that from such a big leader in the gaming industry can’t be shrugged off.

In fact, EA CEO, Andrew Wilson, stated in a teleconference earlier this week that “As a company, we have been leaders in the creation of digital content that has real collectible value in the embedding of that content as part of live services.”

He added: "What we know about collection over time is the collectibility is far more valuable to the collector where the collected item has utility. And I think that in the context of the games that we create and the live services that we offer, collectible digital content is going to play a meaningful part in our future."

36 minutes until the premier pic.twitter.com/twDR16rstV

Our very own ONE37pm team had a blast this week with NFT.NYC, hosting a premiere for our first short film titled, Becoming Beeple. The 21-minute film is an exclusive documentary about artist Mike Winkleman, aka Beeple, and his journey from creating art as a child, to creating his Everydays—The First 5000 Days NFT art which sold for an astonishing $69M at Christie’s auction house on March 11, 2021.

People from all over showed up to watch this inspirational film, with the likes of Gary Vaynerchuck, Logan Paul, and even Lil Polo Tee showing up to share their love for Beeple and the entire ONE37pm crew.

Although this short film originally debuted November 1st in New York City, you can now view it on the ONE37pm official YouTube channel.

If you love NFTs, art, or inspirational stories in general, then I can’t recommend watching this amazing feature enough. If you want to read more about Beeple’s documentary, Becoming Beeple, make sure you checkout the official article here.

In other exciting NFT news, the sought-after NFT play-to-earn game Axie Infinity has officially launched its new decentralized exchange Katana on the Ronin blockchain, allowing users to swap their tokens into ETH or AXS. The Ronin blockchain saw a huge increase in sales over the last 24 hours, up 105.54% with over $47M in volume.

Also something interesting is ​​The Financial Services Commission (FSC) in South Korea has reaffirmed in a public statement today that NFTs are not virtual assets, and will not be regulated as such.

To be fair, not everyone approves of this public statement. Experts in South Korea believe that NFTs can easily be used to launder money.

However, since they are not recognized as digital assets, creators of these tokens are not required to comply with anti-money laundering rules, which also means that people in South Korea will not have to pay taxes on their NFTs.

That's all for today folks. Please make sure to join us for our next NF3 recap. Remember, WAGMI.