Coin Artist and the History of Plasma Bears 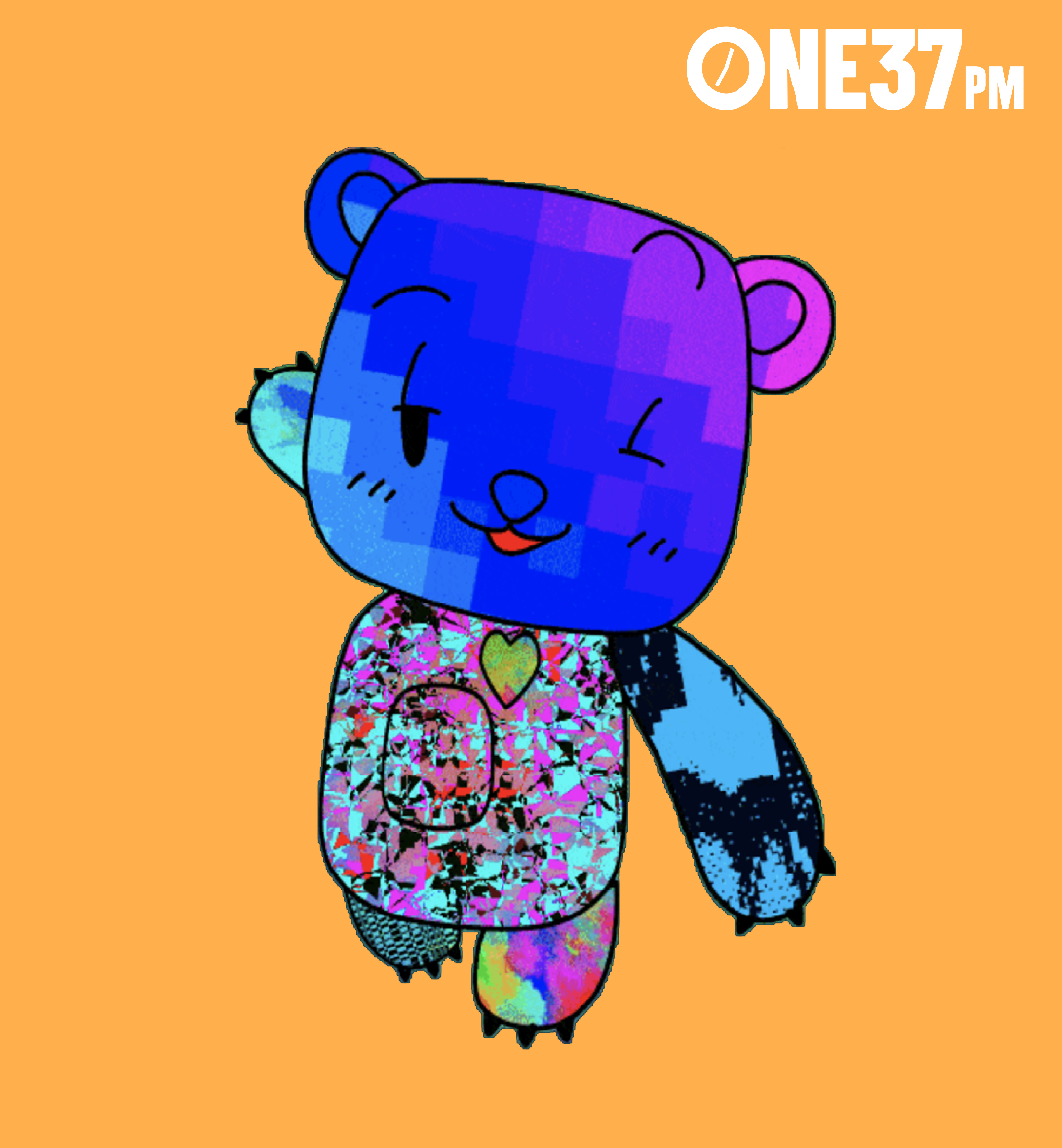 With more NFT projects releasing every day than all of the projects released in 2017-2018 combined, there are some hidden gems created by OGs involved in NFTs before there was a marketplace for them.

In a recent discovery on Twitter by many anonymous and notable collectors, Blockade Game’s Plasma Bears resurfaced with newfound enthusiasm.

To buyers and collectors alike, the enthusiasm is opening a door to NFT history that ties together some of the first NFT creators and developers on the blockchain ecosystem.

One of the only two holders of a full set of @XCOPYART Plasma Bears just listed it for 300 ETH 👀 pic.twitter.com/DNTdsr3OYg

I had the pleasure of speaking with Marguerite deCourcelle, aka Coin Artist, who is the CEO and Co-founder of Blockade Games and Neon District. A seven-year veteran of the cryptocurrency industry, deCourcelle has created crypto puzzles dating back to 2014. In August 2021, she was named to Fortune Magazine’s NFTy 50, a curated list of top influential builders, creatives, and influencers in the NFT space. She famously tokenized herself, creating the first social experiment of a collaborative governance of the Coin Artist ecosystem. She has spoken at Google and NASA in addition to appearing in CNBC, Forbes, CoinDesk, and more.

She had always been an early investor in the crypto community: “In our family, we were into gaming, we had these GPUs from my brother who had some leftover from his time at Carnegie Mellon, and we started mining bitcoin. And from there I learned about decentralized networks and distribution.” From there, deCourcelle went on to develop a variety of projects, including “crypto puzzles” in 2014 where she embedded private keys into both physical and digital experiences. “At the time, I was doing it for educational purposes only and I gave away a lot of money,” she tells me.

“I worked in different programs, and that’s where I found my CTO, Ben—who solved [a crypto-puzzle created by Zden]. And I watched him solve it.” From there, she told me that “the next step wasn’t to just launch Blockade, but to build something even bigger then crypto-puzzles.”

Plasma Bears emerged as a blockchain game in early 2019 for the larger vision that deCourcelle had in mind.

“Ben is a total rock star, and he’s never given up,” she tells me as she explains how Heidorn worked through a lot of the struggles the project faced during the COVID-19 pandemic, when the team lost a two million dollar deal that was supposed to support the development of Blockade Games through the market crash. “He worked on Ledger of Szabo, a game within Pineapple Arcade—which was the first time using the Bitcoin lightning network to mint NFTs on Ethereum, and created the first gateway for the NFT transfers.”

Rodriguez is also one of the earliest artists to ever utilize blockchain technology, and has been working with deCourcelle since 2016. His works dates back even further, as he was one of Bitcoin Magazine's earliest highlighted artists back in 2014.

Plasma Bears were launched as a prototype for Neon District, intended to test out advanced new technologies enabled by Ethereum. “We had been waiting for a metadata type token, and when Crypto Kitties launched, we launched within a week.” It also incorporated artwork from some of the earliest crypto artists, in addition to development, story-telling and direction from some of the earliest innovators in the NFT space, including: dhtenshi, mysterious animator, Zden, ilã, hellocatfood, XCOPY, Psyklon, Cr0wn_Gh0ul, coin_artist, cybourgeoisie, m3mnoch, plinq, ty13r, JTobcat, Red Suirrel Tech, Sarah Gray and Randall Kanna.

Plasma bears were created with a free-to-play format and had no gas fees, which attracted a lot of players. Within six weeks, over 300,000 NFTs were created. However, you could play without having a wallet, which is why only 1500 original assets from the Plasma Bears game exist. “I lost my bears when the side chain we had built the game on top of shut down,” deCourcelle tells me. “I wasn’t given a warning by the people who were running that blockchain network, and so I had not transferred the bears. When the network was dying, I tried to send two of my special bears through, but the transaction never confirmed.”

Short story:
The only plasma bear I transferred to mainnet was my “wittle baby bear”. Who, as my test bear, was nothing crazy special. But now he’s special because he was my only bear & gifted long ago to @xanderatallah, CTO @opensea, who wanted him. :) https://t.co/f6WCS2Olwf

The Bears were originally on the Loom network, which shut down unexpectedly. “A lot of people lost their bears, myself included,” deCourcelle explains. Players could bridge their Plasma Bears over to Ethereum, but due to gas fees and lack of market activity, very few people moved them over. However, once the game shut down and the sidechain bridge was closed, the opportunity for players to retrieve their bears ended. “The bridge worked perfectly, but the bears were lost on the side chain for everyone who didn’t transfer the ones they wanted to keep.” At the time, you were able to play the game to find different bear parts and combine them to create new complete bears: "each time you found a new bear part it was like a lottery and you never knew what you were going to get, and each one had so much personality.” The utility of merging different assets through a form of amputation is what made the game so desirable. “My sister was COO of Blockade for a while, and her daughter was playing it. That’s how user-friendly it was.”

The first bear that went through the bridge.

The last bear that made it through the transfer.

Currently, the bears are available on Opensea, but there is no clear picture of what will happen to each bear and the limbs that are currently incomplete, and it might stay that way. “Each skin is a snapshot of what they looked like before they were transferred over. There are a ton of possibilities of what we do with them.”

The combination utility that Plasma Bears introduced goes on to inspire new creators and is one of the many historical reasons that gives Plasma Bears their significance. Because of the importance of the project, many collectors are collecting parts of Bears and complete Bears.

Thank you for the shout out!! The 👍👍 up has been eternalized on the blockchain. The first Mythical Plasma Bear is gifted to Vitalik. Vitalik, please DM for claim link🦄😺🐻 #ethereum @PlasmaBears pic.twitter.com/fkgR84PFHR

GaryVee is one of the notable people buying the Plasma Bears. Vitalik Buterin, the Founder of Ethereum, was gifted a custom bear as an early gift in the project. Logan Paul bought a bear on the secondary market for 23ETH.

I already have sellers remorse selling my #49 Plasma Bear to @LoganPaul.

I bought this bear when @fomo_team was trying to solve the Plasma Bear puzzle. A small piece of Blockade Games and NFT history.

Blockade Games has also developed an entire RPG called Neon District, which is one of the earliest NFT gaming ecosystems and is also free-to-play. It is currently undergoing its most recent update. “We have been working on Neon District since January 2018, and the concept art began in October 2017.” With each project deCourcelle works on, she wants to “create a space where anyone has an opportunity in the new global economy we are building.”