Quarter Machine: An NFT Project Intertwined with an Animation Studio

The unique project comes from the mind of Shonduras and Spacestation 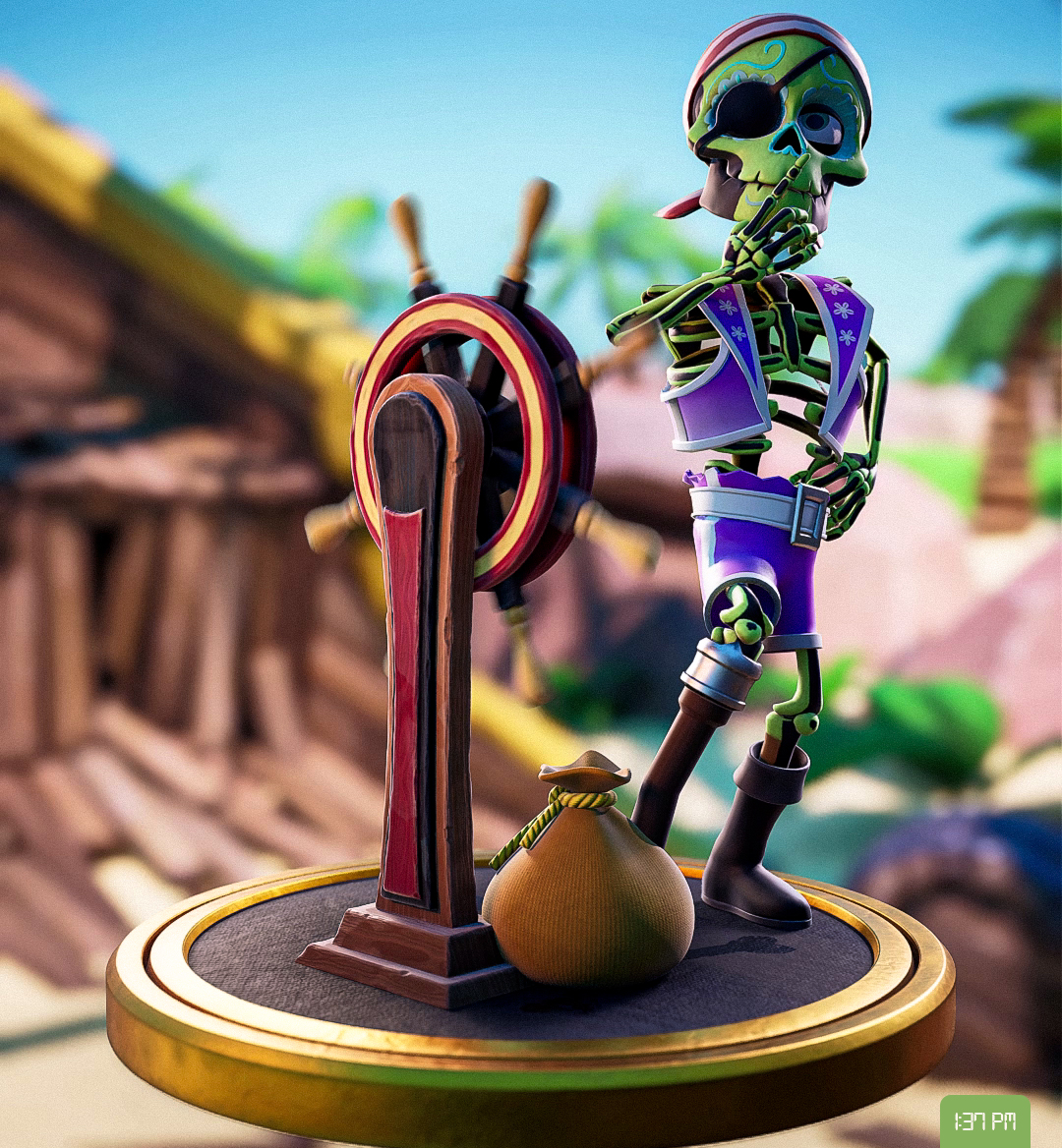 Imagine you’re watching a Pixar movie. Every sequence features a new roster of imagery and characters, from props to backgrounds and more. All of those images are owned by one entity: Pixar. But allow your imagination to wander a little bit more. What if all of the items incorporated into the magical animated world were actually owned by some of the viewers?

This is the future that Shonduras and his project Quarter Machine are bringing to life. Whereas numerous NFT projects have promised utility down the line, the benefits promised by the Quarter Machine team are already live. When I spoke with Shonduras and his team last week, I was struck by the vast array of monetization and collaboration opportunities posed by their project. We hear the term “utility” and “community” tossed around these days, but what do these words really mean? Well for the Quarter Machine team, it means that, by buying into the project, you essentially become one of the co-owners of the Spacestation animation squad, potentially earning licensing rewards, merch and more—immediately.

This is your chance to feel ownership in a studio.

Inspired by VeeFriends and the project’s commitment to utility, Shonduras and his team have been working on the Quarter Machine project for over a year before they launched the first collection in late November. Shonduras is well-known for being one of the world’s most beloved Youtubers, and the man who built the esports org, Spacestation Gaming. But the esports org is actually just one of the ten enterprises under the Spacestation umbrella—including the rapidly growing Spacestation Animation. That’s the entity behind Quarter Machine, Shonduras’ first foray into the world of NFTs. But rather than just dropping a static 2D collection, the Spacestation team has created something entirely unique with their project.

Contrary to the method many other projects have used, the team has spent zero money on marketing and promotion for the project, instead devoting all of their resources towards creating something great—both artistically and socially.

Essentially, all of the items from the first Quarter Machine drop are items and props that may be found in the brand’s many forthcoming animated films. If you’re lucky enough to own one of the items in the first film, you’ll start earning licensing rewards (money!) by the end of this year just by holding one of the NFTs. The first film earned over a million views in about a month, and the second one has netted nearly 500 thousand views in less than a week. Over 100 NFT holders from the first collection (of the 1,000 tokens), should expect to earn licensing rewards from their tokens appearing in the first film. All the other tokens may continue to show up down the line as well in future films; ideally, all holders will eventually get a piece of the pie as the studio develops.

Pixar has become well-known in recent years for the means by which they’ll hide easter eggs in a movie referencing a forthcoming project long before it comes to fruition. “So what if we take that concept and we really amp it up for the digital space?” Shonduras poses to me. That’s what they’re doing with Spacestation animation, creating a gamified and ever-evolving storyline that immerses young viewers, while collectors get to become part of the production process and act as a pseudo co-owner of a burgeoning studio. It’s just so cool.

Why a quarter machine? “Quarter machines are the original minting process,” Shonduras jokes to me, referencing the quarter machines at truck stops nationwide. And when he says it, I realize how accurate the analogy is. You put your money into the machine not knowing exactly what you’re going to get, and then wait for the reveal. So it made perfect sense to use this skin as the branding of their project. This mechanic also allows them to continuously do drops “on a monthly basis”, all of which are deposited out of their virtual quarter machine. “Each drop will be different,” Shonduras tells me, noting that the second drop was produced with much higher scarcity than the first. The first drop was sold for .25 ETH per token (a “meta-quarter,” Shonduras cheekily jokes to me), which is higher than some other mints, but you’re not just buying a static token, you’re buying an asset tied to some unbelievable future opportunity. At the time of writing, there are some genesis tokens still available.

Shonduras breaks the primary benefits for being a Quarter Machine holder into three sections for me:

The licensing rewards aspect is the most unique in my opinion, allowing holders to benefit from their early support and join the story of our animation studio. Nonetheless, the other components are being conducted in a much more timely manner than any project I’ve seen to date. Holders of the genesis drop have already received merch, less than a month since the initial mint. And there’s more to come.

And, of course, the meta map is jam packed with other goodies and opportunities. 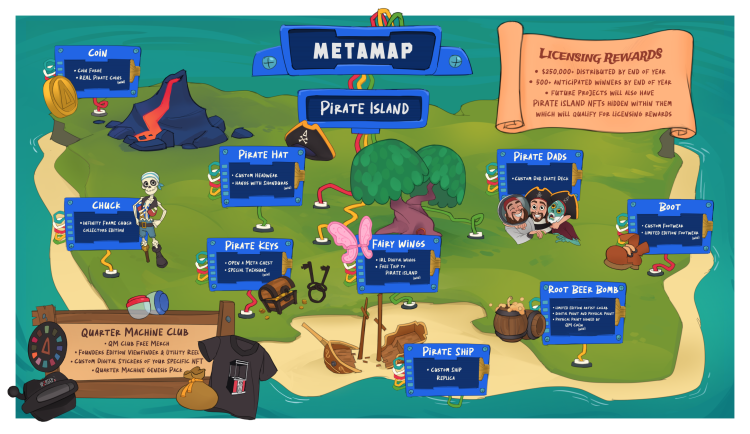 The Spacestation team has so much planned that every time it feels like we’ve reached the conclusion of the call and covered everything there is to cover, Shonduras will drop another major nugget of utility embedded in the collection. Late in our call, he casually mentions an entirely additional NFT that all holders will receive: the capsule itself.

Essentially, when you buy from the machine, your item opens out of a capsule, and the capsule disappears. But what if holders got to hang onto their capsule? As a brand committed to giving the holders what they want, they’re doing just that. They’ll eventually airdrop the capsules back to all of the holders as separate NFTs, but now the capsules have been modified to act as transponders, communicating with the HQ. So hypothetically, they could send a message to all the blue capsules, asking users to claim some sort of merch or other benefit. Or maybe all yellow capsule holders will get invited to an event. The capsules get to become an NFT of their own, acting as the communicative link between holders and the Spacestation team.

“Quarter Machine doesn’t plan on generating revenue, but giving back to the community and building the studio,” Shonduras tells me. Jordan Nguyen, the brand’s creative director, shares another interesting aspects of the design of the tokens and how it can impact utility down the line. “We’re using a game engine to develop all the assets, so they’ll all be metaverse compatible,” he tells me. All of the tokens launched by Quarter Machine will be compatible with a vast array of metaverses, meaning you can take them with you into your virtual world of choice. Just a little bonus. Down the line, Shonduras tells me, “We can create a Pirate Island in Decentraland or another metaverse.” By utilizing a game engine, everything they’ve created so far—and plan to create—is already built for the metaverse.

I’ve seen a lot of projects and heard a lot of promises, but Shonduras and his team are not just talking the talk. Everything that they’ve promised to their community has either already come to fruition, or will be tangible within the next few weeks. I admire that they worked on the project for so long before going public, elevating their promised utility to reality, rather than just a hypothetical future.

“We have so many plans to build this community,” Shonduras grins to me during our call, overflowing with excitement around what they are building at the Spacestation HQ. I can’t help but grin too.

The author of this article is a Quarter Machine holder.