Behind the Scenes With Spottie Wifi, The One and Only CryptoPunk Rapper

The innovative Punk's past, present, and future in music 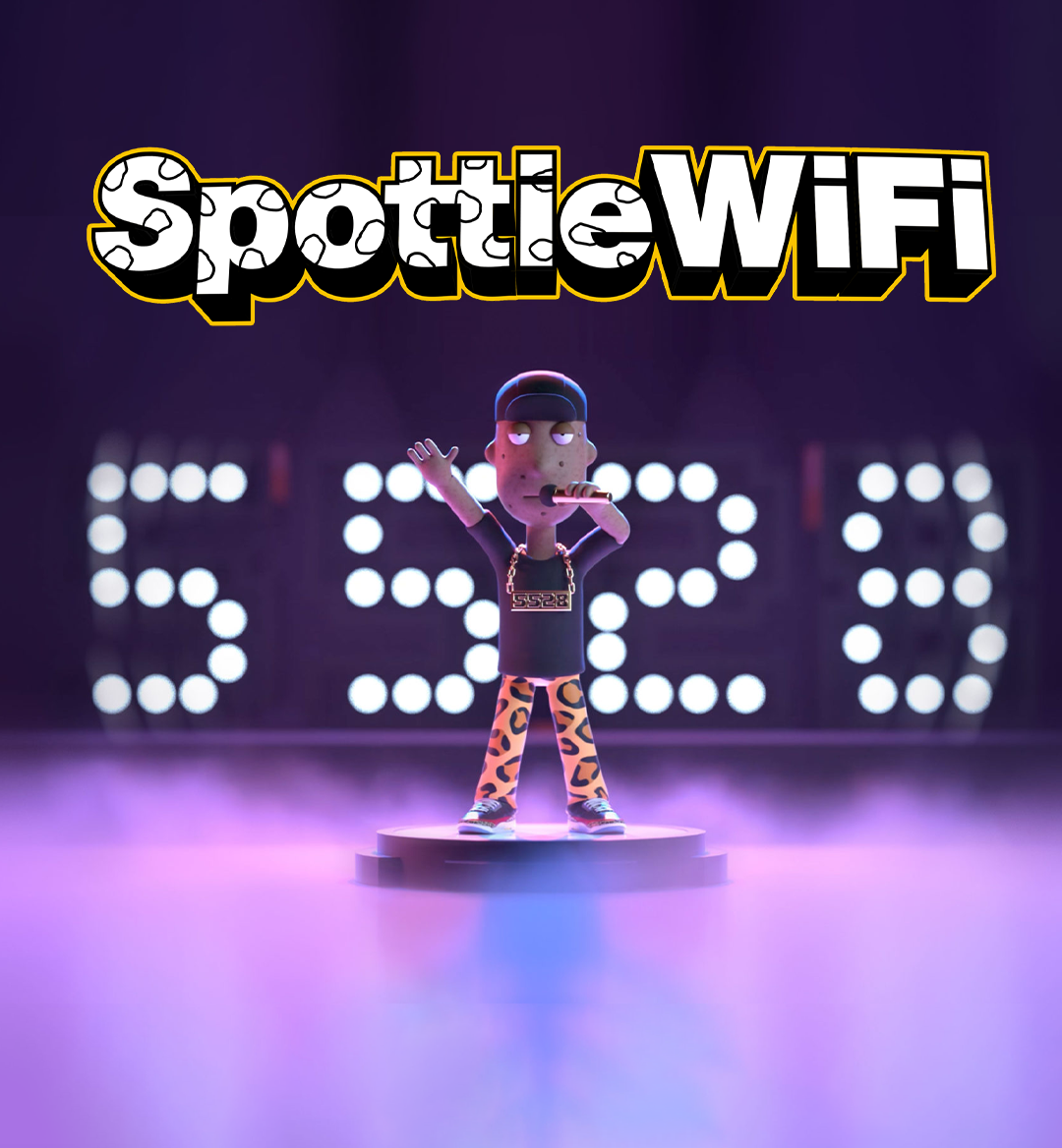 There are exactly 10,000 unique CryptoPunks NFTs owned by over 3,000 individuals. Of those thousands of NFTs and collectors, there’s a small number of people who have chosen to do something special with their Punk. Perhaps one of the most creative and innovative Punks is Spottie Wifi.

Spottie Wifi is best known as the one and only CryptoPunk rapper. Miguel Mora created Spottie’s persona after purchasing Punk 5528, on February 23, 2021. Spottie has collaborated with hip-hop stars including Bun B and continues to pave the way for the NFT music revolution.

Though Spottie Wifi is now one of the most well-known and respected musicians in the Web3 space, he comes from humble beginnings. I had the great pleasure of sitting down with Miguel (aka Spottie Wifi), to talk about how Spottie came to fruition.

Miguel Mora began creating music in 2006. He started out as a member of various bands and rap groups, and was even a solo artist for a while before realizing making music wasn’t paying the bills.

Come 2012, Miguel put out his last solo album and ended up getting a full-time gig working in marketing and advertising. From 2012 to late 2019, Miguel didn’t write a single song. Once Covid-19 struck, he was furloughed from his marketing job.

Having dabbled in crypto a little bit in previous years, Miguel eventually discovered NFTs in January 2021. He started with NBA Top Shot before meeting other collectors who owned CryptoPunks.

Miguel purchased his first CryptoPunk NFT around February of 2021. It didn’t take long for him to realize that having a Punk meant instant access to an entire community of other CryptoPunk holders and NFT enthusiasts.

At the time, Miguel was freelancing to pay the bills. Shortly after becoming a Punk holder and getting more involved in the community, he discovered that there weren’t many people who were using the IP rights to their Punks to its full potential.

Keep in mind, this was before Bored Ape Yacht Club (BAYC) even existed, and long before Punks had any brand deals. This was the very beginning of the CryptoPunks’ legacy.

That’s when Miguel had the thought that if someone took their historic Punk NFT and used it musically—they'd have a built-in audience ready to offer instant support.

By March, Miguel reached out to his ex-music producer (and best friend) with the idea of being a CryptoPunk rapper.

Miguel wasted no time getting started on his idea. He released “I’m Spottie," a concept album that portrays the story of how his name came to be. The album remains one of the most successful and innovative music NFTs in the history of Web3, solidifying its place as a true historic NFT.

As a physical vinyl collector, I see what @SpottieWiFi is doing with his drop today and really appreciate the small details.

Some mints can be a mashup of Drums, Sounds and Bass from the 8-Bit, Emo and Rap version of "I'm Spottie", adding to the fun of minting these. pic.twitter.com/2H04ftZdK9

The album ended up selling out in 60 seconds, generating more money than he had ever made from releasing music in an entire year.

He made 60 ETH, which at the time was about $192,000 (a revenue that’s equivalent to about 40 to 50 million streams on Spotify). The craziest thing about this is that it only took 700 people to sell out his album—proving that the thousand-fan theory is truer now more than ever.

Spottie says artists might think that they need millions of fans, but that's not true. He says it's only because the business model right now for the record industry is designed to benefit streaming platforms and record labels.

With an NFT, I can package a lot more value than I can package with an mp3. I'm giving you a copyright license so you can use the music in your content—you can monetize the music. You could get access to merch, a free vinyl record, exclusive events and performances in real life and digital experiences.

Where Did the Idea for Spottie Wifi Come From?

When Miguel was looking to buy his first CryptoPunk, he wanted to make sure he got one that resembled himself in terms of traits, but also one that included some level of rarity.

Punk 5528 seemed to be the perfect fit. It has a medium skin tone and wears a baseball cap, resembling Miguel, but, it also has spots on its face making it very rare considering there are only 124 Punks that have spots on their face.

Although spots are a rare trait, Miguel noted that at that time it was an undervalued trait that had minimal demand. For him, he saw this as an opportunity to craft a story and make sure it became a central part of Spottie’s identity.

“I wanted to give him a backstory, I felt like that had to be a central part of his identity because it’s what makes him really unique," Spottie said. "And it’s like flipping and turning a negative into a positive because everybody has something that people would point at and not be attracted to— but that’s what makes you unique.”

However, after giving more thought to what Spottie’s stage name would be, it hit him. His name was Spottie Wifi. To go along with his new name, Miguel swiftly developed Spottie’s backstory.

Spottie WiFi Is More Than Just a Rapper

Although Spottie Wifi is best known as the first CryptoPunk rapper, Spottie is much more than that. Spottie is a character that can be utilized in all sorts of content, not just music.

From comic books to animated content, Spottie is a character that can go in any direction that Miguel sees fit. That being said, Spottie is the lead character of SpottieVerse, but he’s not the only character. 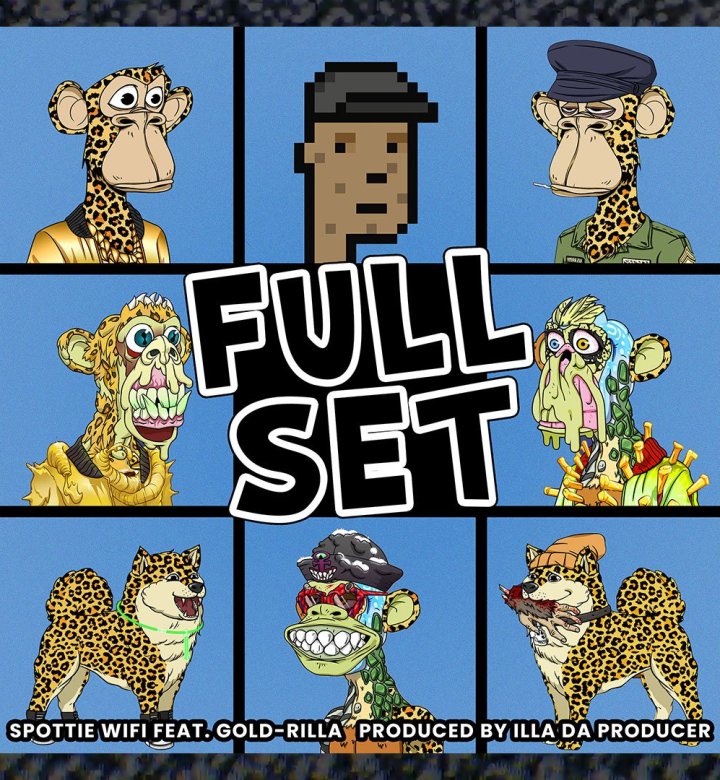 Other characters include Spottie’s hype man, a Gold Bored Ape named Gold-Rilla, who’s featured in the PUNKS Comic Issue #2, and is also featured on Spottie Wifi’s single, Full Set. All of the characters who are currently part of SpottieVerse are owned by Miguel himself, and his producer, Illa Da Producer.

For those who might not be familiar with Spottie Wifi’s album and roadmap, I’m going to break it down for you. The genesis album, I’m Spottie, enables you to claim Spotties upcoming NFT releases for free (singles 2 through 5), which are a part of his new album dropping later this year.

That being said, Spotties new album is a series of NFT drops. There are going to be five total NFT drops leading up to the release of the full album. Each of the five represents a single song from the album.

The first single that dropped is called All Time High (feating Bun B). The second single “Full Set”, has been revealed and is set to drop this month. This special single has several variations featuring several artists. 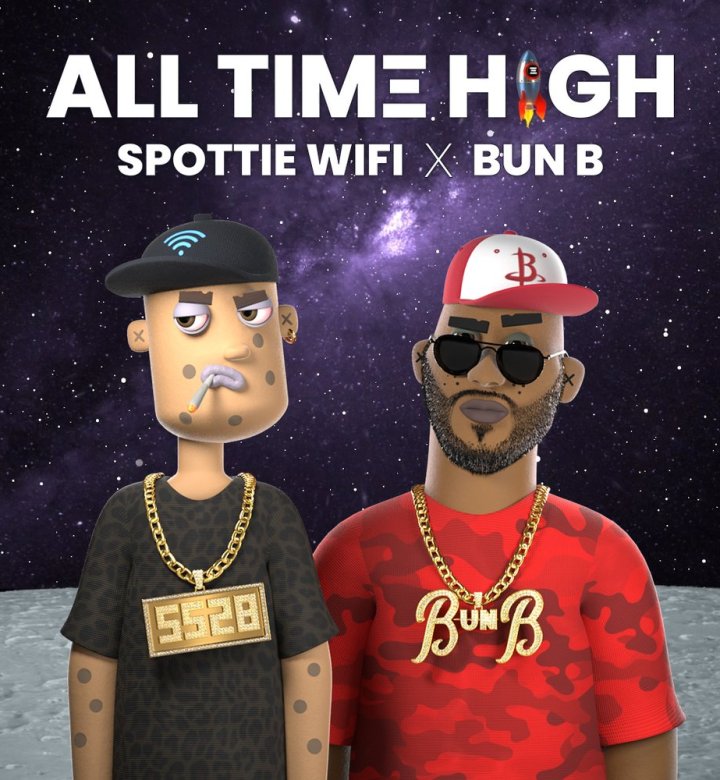 The original version features Gold-Rilla, the dancehall version features another Ape named Sergeant Simmie, and the third and final remix features Champ Medici (Snoop’s Son), along with a second Death Row artist who goes by Wes.

In addition to the Full Set single, the last three singles will be released as NFTs throughout the year leading up to the release of the full album.

If you collect one NFT from each of the five NFT single collections you will be able to claim a free vinyl record of Spottie’s new album, or you can burn the set of five NFTs to claim a special album NFT that will provide additional utility.

Collecting all five singles is the highest level of engagement you can have with the release of this second album.

The whole narrative of Spottie’s new album is telling the story of how he’s crossing over from the metaverse into the real world. In addition to this new and creative narrative, the album is said to be packed full of collabs with some of the most prominent metaverse musicians, as well as other mainstream artists like, Jim Jones.

Ultimately, the goal of this album is to bring Spottie into the mainstream along with NFTs. There’s no official launch date for Spottie’s entire album yet, although, I heard it may be sometime in December. Wink, wink.

When asked what tips the king of music NFTs had for artists interested in entering web3, he said it's important to not rush into things.

Spottie also emphasized the importance of being hands-on and asking questions.

"Whether you're buying your first NFT or claiming a free one," Spottie said. "Either way, you will answer a thousand questions you didn’t know you had by going through the process”

It’s always fun to get a glimpse into the mind of someone as innovative as Spottie. That’s why I couldn’t let Spottie get away without asking him these rapid-fire questions.

Answer: I think I gotta say Tupac. Not even based on songs or rhymes, just more for like what he means for me culturally.

Answer: Uhmm… Damn dude. I gotta say CryptoPunks. I’m the king of Punks, I gotta say Punks. But, that’s a tough one.

Answer: Uhmm… DAMN! You’re really trying to get me in trouble here. I’m going to say ETH, mostly because I don’t want to catch hellfire from the NFT community, and also just because I feel like it has the most application, and probably the most room to grow if you’re just looking at it purely as a trade.

Question: What has been your favorite collaboration?

Answer: Bun has just become a great friend. I was actually picking his brain on the restaurant business today because he’s got Trill Burgers, and he’s just such a great friend where I can ask him about, you know things he has so much experience in. And then I was talking to him about Otherdeeds and The Otherside, so it's just a really symbiotic relationship, and we worked together the longest out of all these collabs I’ve done, so that’s got to be number one.

Question: Who would you love to work with that you haven’t yet?

Well, that about wraps it up. To learn more about Spottie and his music, make sure to check out his website. Also, be sure to give him a follow on Twitter to stay up to date with all his upcoming album drops and collaborations.