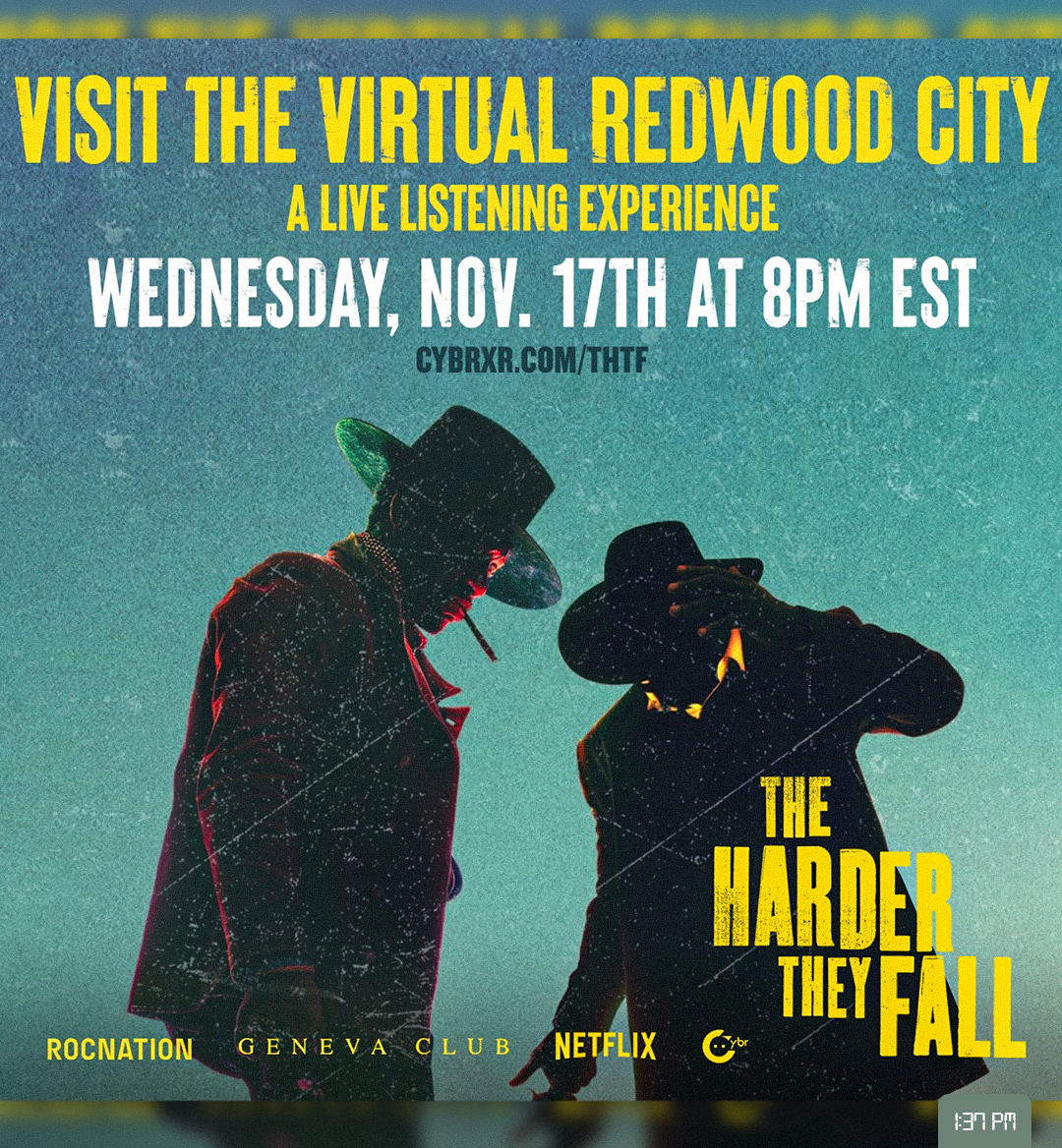 Get ready for an unforgettable experience in the metaverse. Today, Roc Nation in collaboration with CYBR, is launching The Harder They Fall soundtrack’s virtual metaverse experience in celebration of the recent film and soundtrack release.

Within this metaverse, you can listen to the entire soundtrack, which is produced by Jay-Z himself, as well as visit sets and scenes from the film.

Wander around the church where you can interact with the official movie trailer, explore the train which features unique art, step inside Mary’s Stagecoach where you will gain access to the official merch store, and have fun at the hotel—where you have the opportunity to play an interactive game and even win prizes!

Additionally, inside the saloon viewers will be able to watch an exclusive live-streamed panel discussion with chosen cast members from The Harder They Fall and the original soundtrack's artists about their creative processes behind the production of their project.

As a participant, you will enjoy even more perks and surprises with The Harder They Fall cast and artists as you explore the metaverse space.

About The Harder They Fall

The real black cowboys that inspired the movie THE HARDER THEY FALL pic.twitter.com/qajn3DJXxS

The Harder They Fall characters are based on real cowboys, lawmen, and outlaws of the 19th-century American West. The film made its global debut on October 6, 2021, at the BFI London Film Festival. It had a limited premiere on October 22, 2021, before becoming available on Netflix on November 3.

When bandit Nat Love (Jonathan Majors) learns that his adversary Rufus Buck (Idris Elba) is about to be freed from prison, he gathers his crew to track Rufus down and exact revenge.

Nat's crew consists of his previous love, stagecoach Mary (Zazie Beetz), his right and left-hand man—hot-tempered Bill Pickett (Edi Gathegi) and quick drawing Jim Beckwourth (R.J. Cyler)—and a startling adversary-turned-ally, all of which ride beside him in this confident, righteously new school Western.

Rufus Buck has his own terrible team, which includes "Treacherous" Trudy Smith (Regina King) and Cherokee Bill (LaKeith Stanfield); they do not know how to lose.

The Harder They Fall was directed by Jeymes Samuel, written by Samuel and Boaz Yakin, and produced by Shawn Carter, James Lassiter, Lawrence Bender and features a scorching soundtrack.

You can watch The Harder They Fall now, on Netflix.

The Harder They Fall Soundtrack

Jeymes Samuel and Shawn "JAY-Z" Carter co-produced the music for The Harder They Fall, which was published by Roc Nation in collaboration with Netflix.

JAY-Z, Kid Cudi, Ms. Lauryn Hill, Jadakiss, Conway The Machine, Koffee, Seal, CeeLo Green, Barrington Levy, Samuel and many others are all part of this superb soundtrack. Furthermore, all of the songs on the soundtrack were created by Samuel, who also co-wrote the script and directed The Harder They Fall.

Checkout The Harder They Fall tracklist:

Very excited to announce our latest metaverse collaboration with @rocnation & @netflix! Join us TONIGHT Wednesday, November 17th @ 8PM EST in Redwood City for a Live Listening Experience with surprise guests! See you there!

CYBR pushes the envelope of mixed-reality (WebXR) technology and spatial audio to its limits while making these experiences available to everyone via a simple online link—meaning there’s no need for an app, VR headset, or a game console. The goal of CYBR is to make the Multiverse more democratic.