The Best Pictures of the 2022 Academy Awards (According to Us) 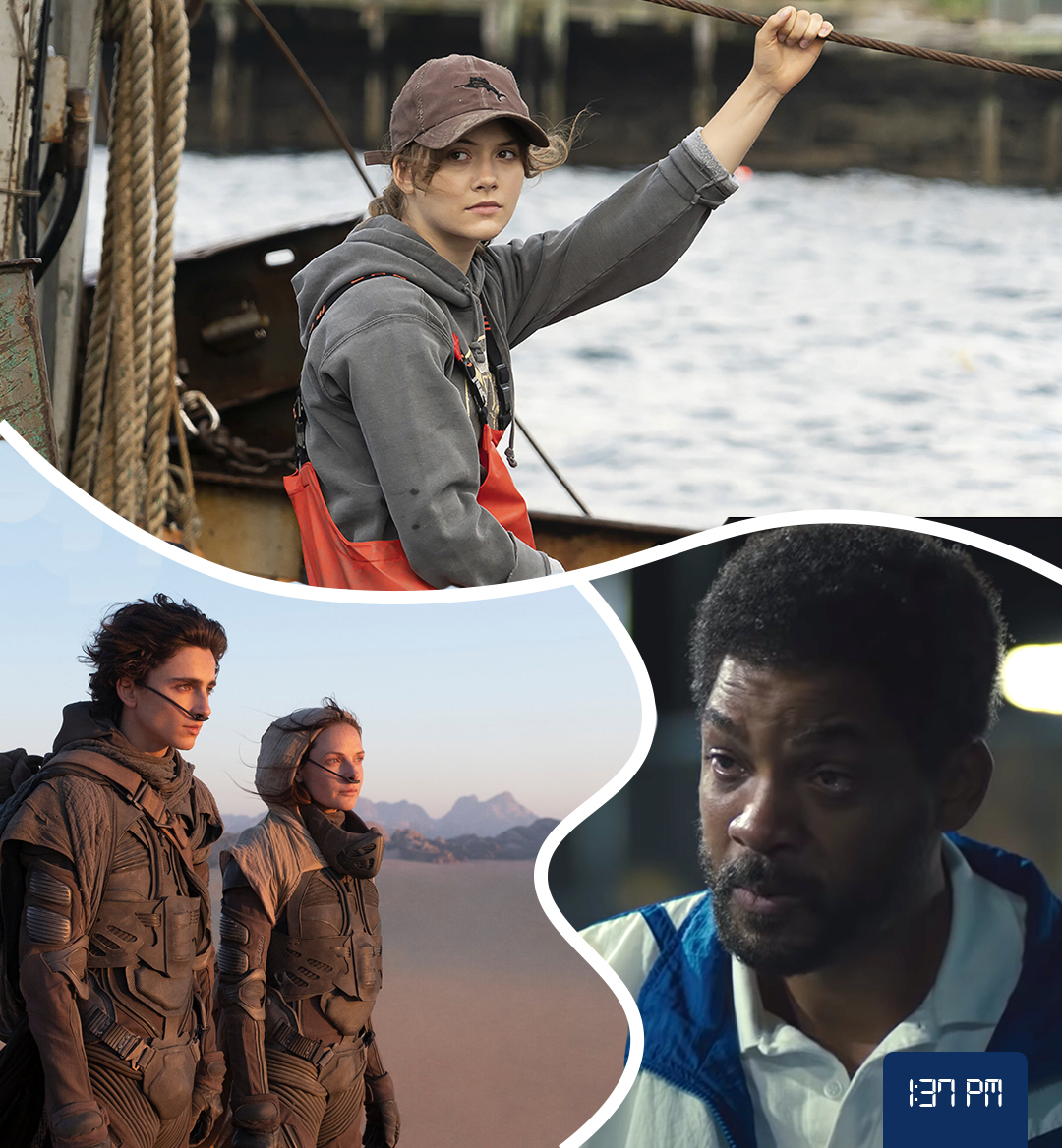 The 94th Academy Awards are this Sunday, and it's the biggest night of the year for movie lovers and celebrity aficionados alike.

The Oscars have certainly taken a hit in recent years in terms of prestige and viewership (last year's award show saw its lowest ratings ever, with less than 10 million people tuning in.) This year, the show has also seen its share of controversies, from lowering the number of awards being broadcast during the telecast to failing to invite Rachel Zegler to the ceremony.

And the nominees for Best Picture are... #Oscars pic.twitter.com/wKEWVMpqwl

Ten films are nominated this year for Best Picture, each with its own merits. With everything from sci-fi epics to coming-of-age movies and beyond, there was something for everyone in this year's crop of Best Picture nominees.

At present, Jane Campion's The Power of the Dog is in leading contention for the big prize, with Campion heavily favored in the directing category as well.

Movies are subjective, and not everyone will have the same opinion on films. That being said, the following choices are the only right ones (kidding, but only kind of.)

Listen, I completely understand if a movie that doesn't tell the whole story wouldn't work for some people. Just ask ONE37pm's, Bo Templin.

Dune follows the story set out in Frank Herbert's novel of the same name, and the film covers the first half of the book, so the complete narrative has yet to be told.

However, where Dune succeeds and towers over the rest of these films is in the technical aspects. Denis Villeneuve's direction and Grieg Fraser's cinematography tell a story in and of itself, between the large sweeping views of the desert landscapes, the towering buildings of Arakis, or the close-up and more personal shots of characters like Paul or his mother, Lady Jessica.

Timothée Chalamet delivers one of the best performances of his career, with the scene where he takes the test being a particular standout. He excels at showing emotion on his face; whether that be anguish, curiosity, or joy, these qualities are conveyed perfectly through his expressions.

We might not know the whole story just yet (or maybe you do if you read the book), but there's no question that it's one of the best films of 2021.

I didn't know what to expect from CODA, not to mention I was unaware that the title was an acronym for "Child of Deaf Adults." In an industry that struggled with lack of representation—and still does—CODA helped shine a light on the lives and struggles of those in the deaf community.

A remake of the French film La Famille Bélier, CODA stars Emilia Jones as Ruby Rossi, the titular child of deaf adults, who is the only member of her family with the ability to hear. Her parents, played by Troy Kotsur (nominated for Best Supporting Actor) and Marlee Matlin and her brother (Daniel Durant), make their living running a local fishing business. Ruby helps out, at first planning on joining full-time after graduating high school, but after embracing her talents as a singer begins chasing her dream of doing it professionally.

CODA made me laugh, cry, and left me with a profound sense of joy. Many Best Picture nominees seem to lean on the idea that a film needs to be incredibly dramatic to be taken seriously as a movie. Sometimes you just need a film to make you feel good, and like many coming-of-age stories, CODA fits that mold perfectly.

Maybe it's because Kenneth Branagh's Belfast is a movie that I can more personally identify with rather than some of the other nominees, but this film is one that you can tell the director poured their heart and soul into. You can always tell when you're watching a movie like that, and it's no different in the case of Belfast.

Much of my ancestry comes from Ireland, if you couldn't tell by my name. The film, about a family and a boy named Buddy growing up in Belfast, is framed around the violence of "The Troubles," a period of religious and nationalist strife in Northern Ireland.

By using the city as not just a setting but also as an extended member of the family, Belfast hits all the right notes. It's a city in turmoil, and as Jamie Dornan's character, "Pa," struggles with keeping the family safe, you can see how much this family is in conflict.

Featuring stellar performances from Caitríona Balfe, Judi Dench, Dornan, and Ciarán Hinds, Belfast is a film that everyone can relate to.

The film's central theme of "what exactly does 'home' mean?" permeates throughout, as Pa wants to leave Belfast behind to protect the family, and Ma (Balfe) wants to stay as it's the only place she's ever called home. It's a situation that no one ever wants to find themselves in, and with the events in Ukraine currently unfolding, feels all too prevalent.

Is home where you're from? Or is home wherever you're with those that you love?

Belfast delicately balances this idea and finds a way to make the audience ponder this question and reflect on it themselves.

I actually wasn't expecting much going into West Side Story, as I couldn't tell if it would be super cheesy and lame based on its commercials. It was also going to be my first foray into West Side Story in general, as I had somehow never seen the original (I know)—I knew the story (modern-day Romeo and Juliet meets 1950s New York). Still, the only version I had seen was the one where Cher plays all of the roles. While this one might not have been as good as the latter, I was genuinely surprised by just how incredible it was.

It's insane to believe that this was Rachel Zegler's film debut, as she portrayed an effortless Maria alongside Ansel Elgort's Tony. Having played Anita in the original 1961 film, Rita Moreno was cast as Valentina, in a role that fit her perfectly, as she had been through it all before both in the movie itself and behind the scenes.

This adaptation was a play brought to life, as it had all of the camp that you would see on stage blended expertly with the stunning cinematography and direction of Steven Spielberg. From the kicks of dust and scenes on the fire escape, the gritty, old-school nature never feels forced yet is done with seemingly incredible ease.

The thing about Drive My Car is that its brief description is a bit misleading, as I anticipated it being a road trip where two unlikely strangers get to know each other over the course of the film. I went into the movie thinking that that's what I was going to get, but boy, that's only a tiny sliver of what the film is really about.

While a bit on the longer side (2 hours and 59 minutes), Drive My Car explores the human connection in a few different ways. It dives into the complexities of a romantic relationship as Yūsuke Kafuku (Hidetoshi Nishijima) decides to stay in his marriage with Oto (Reika Kirishima) out of fear of living a life without her.

The bulk of the film takes place in Hiroshima at a theater festival where Kafuku is directing an adaptation of Anton Chekhov's Uncle Vanya. He's assigned a driver to take him to and from rehearsal every day, which turns out to be Misaki Watari (Tōko Miura), a younger woman he initially dismisses, though later, the pair forms an unexpected bond.

I went into CODA knowing next to nothing about the plot and was given one of the greatest films I have ever seen. Conor gave a great rundown of the premise above, so I'll just jump into gushing about this movie.

There's Marlee Matlin, who struck a great balance between a complicated yet loving mother and a woman who's a bit afraid of change. We were also introduced to quite a few lesser-known actors, and they all put on equally outstanding performances. Ruby's relationship with her father is particularly touching, as their bond and dedication to one another are palpable.

CODA shows a world that most of us truly know nothing about. In one standout moment, we watch in silence as Jackie, Frank, and Leo watch Ruby's performance—unable to hear anything—and respond in applause only when they see others doing so; it's a gutting moment of clarity.