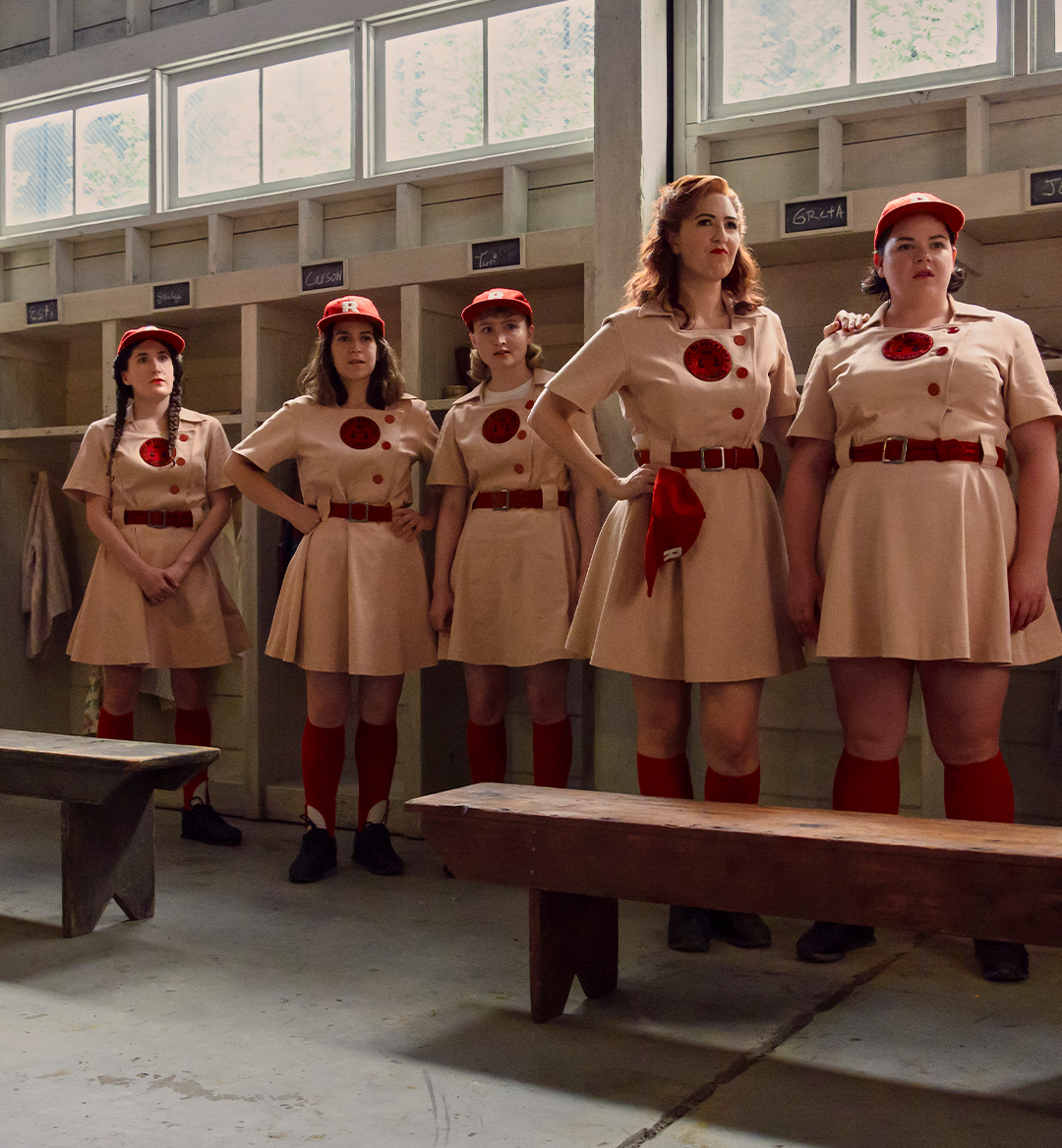 The most famous line from 1992's A League of Their Own is spit from the mouth of Tom Hanks: "there's no crying in baseball!" he yells to one of his female players out on the field. But what that line fails to account for is the fact that there actually is quite a bit of crying that comes with the sport—and that it's not just relegated to the women.

Sure, baseball requires physical prowess, but it also demands an equal amount of mental strength. There are hours of toiling, frustration, anger, and yes, sometimes crying, all going on behind the scenes—and rightfully so. Like many sports, the action and emotion are perpetually tied up in baseball, oftentimes strung together in some sort of screwed-up mush of tangled cords and bubblegum gobs.

Prime Video's A League of Their Own takes all of the action from Penny Marshall's original film and spreads it out over eight episodes, fit with an entirely new cast and a massive smack of reality to the plot. Let's not forget: the All-American Girls Professional Baseball League was a real thing in the 1940s and early 1950s, getting its start when the United States entered World War II; the team that comprises the Rockford Peaches is just as ready for battle.

Here's the thing: A League of Their Own (1992) found many of its actors at the height of their careers: Geena Davis was hot off the presses of Thelma & Louise, Madonna was just coming off of her groundbreaking Blond Ambition Tour, and Tom Hanks was quickly becoming Mr. Rom-Com. And while this iteration of A League of Their Own might not have that same star-powered spark, it certainly makes its own magic—and in a much deeper way. 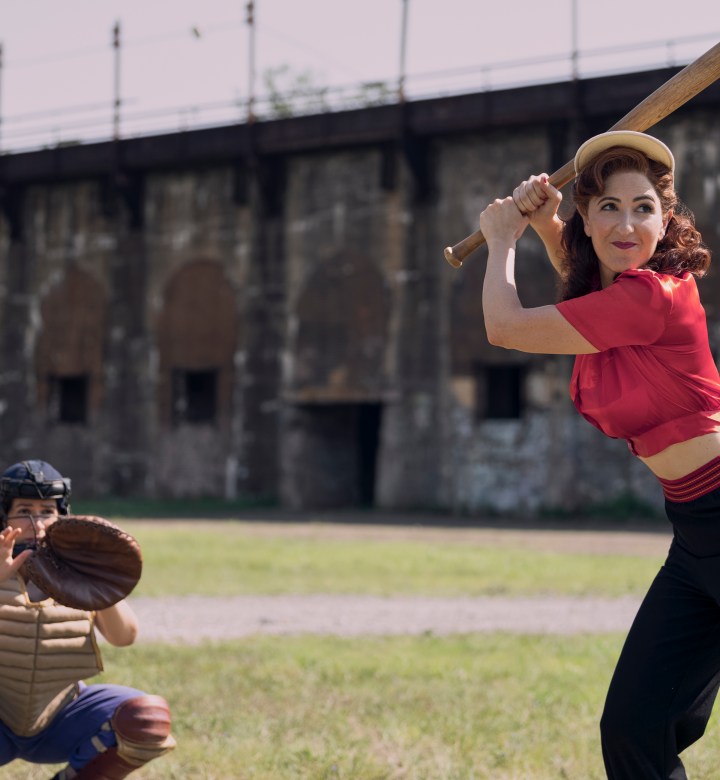 While Dove Porter isn't the burly alcoholic that the original film's Jimmy Dugan (Tom Hanks) was, both characters are certainly not too thrilled about their coaching jobs, though Porter makes more of an effort to at least appear interested in the task at hand—though even that doesn't last too long.

As is common with most teams when they're first getting their footing, the Peaches are a bit disjointed, missing easy plays and being thrown off by the insults hurled their way from the sparsely-filled stands. The catcher, Shaw, ultimately emerges as the leader of the pack after Porter proves to be flaky and unfit, though earning the respect of her team ends up being tougher than the practices and workouts combined.

Because this is an eight-episode series and not simply a two-hour film, the characters are allowed the time to ebb and flow and fall into the right and wrong places instead of having to immediately mesh and pull off a championship win in the blink of an eye. That time proved to be the most sacred of all, giving characters the space to be a little indecisive, confused, and most of all, human.

That humanity is what's central to A League of Their Own: it's not as flashy as the original, which isn't to say I don't adore the flashiness of the original. But, you know, the series doesn't have Madonna swing dancing in the middle of a bar. And for a show like this, it works, because it's not just about baseball—and maybe it never is.

If we learned anything from the Wizards of Waverly Place theme song, it's that everything is not what it seems, and in that sense, the women of A League of Their Own aren't what they seem. The league owners want them to behave like "proper" women: play in makeup, wear dresses on the field, and remain unfazed when a man in the stands makes verbal assaults at them.

The main problem (for the league) with all of this is that the majority of the team isn't going to sit back and take these rules without putting up a little bit of a fight. 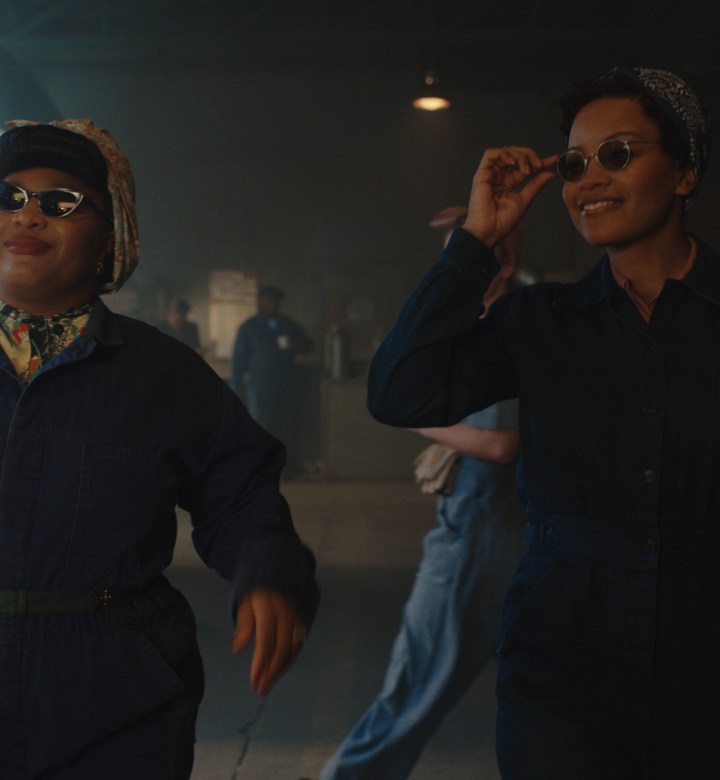 As devout fans have said time and time again, the original film missed out on what could've either been a fascinating segue or an incredible spinoff film with a very short yet important scene: a black woman picks up a baseball that had been missed and throws it back to Dottie Hinson (Geena Davis) on the field—except when she throws it, it flies past Dottie's head and into the mitt of the player standing behind her.

This time around, we finally got that spinoff, as we're introduced to Maxine "Max" Chapman (Chanté Adams), an aspiring pitcher with a great arm who heads to Chicago to try out for the All-American Girls Professional Baseball League. Unfortunately, given that this is America in 1943, she's instructed to leave just seconds after walking onto the field.

Despite that, she's able to sneak in one Hail Mary throw, rocketing off a baseball from the outfield and into the stands behind home plate. While the other girls trying out are left staring in awe at the player and her throw, the leaders of the league still force her out, leaving Max to head back to her home—which just so happens to be in Rockford, Illinois—with her best friend, Clance Morgan (Gbemisola Ikumelo), who had accompanied her on the trip.

Back at home, things aren't so full of hope for Max. She's begrudgingly working at her mother, Toni Chapman's (Saidah Ekulona), salon with dreams of becoming the pitcher of the local men's baseball team, though her mother frowns upon her pursuing the sport in any sort of serious way.

On top of that, her parents are secretly concerned that Max is queer, something that was extremely frowned upon at the time, leading people who did identify as queer to be completely shunned by their family, friends, and communities. If they were found at an underground queer bar or another gathering spot, they would be beaten and arrested by the police.

This issue hits home for Max's mother, Toni, who has completely abandoned her sibling, Bert, for being a trans man. If Max turns out to be similar to Bert, Toni won't blink before sending her packing, and Max knows that. 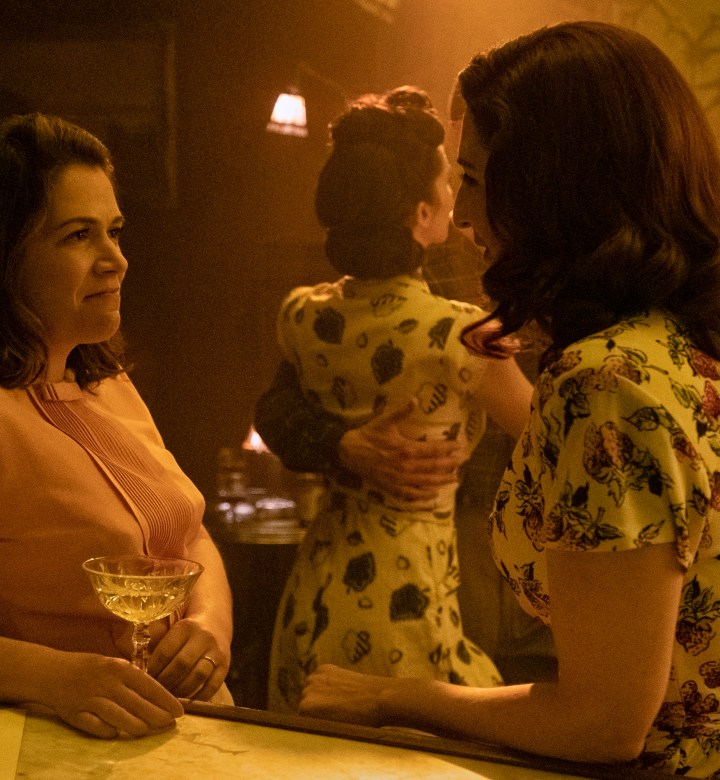 Max and the Peaches' (also a great band name) worlds collide once again, though this time it's under the dim light of a storage room at a local bar—and it's because Shaw and Gill are hooking up down there. While this seems like an end-of-the-world sort of situation for them, Max has a few other skeletons in her own closet to protect, so she won't be heading off to the local police station anytime soon to report Shaw and Gill.

What starts off as just that singular instance between the two evolves into something much more serious as the show progresses, and while it reveals what Shaw and Gill really want out of life and each other, it also shows that this really isn't all that uncommon.

After sneaking around and following one of her teammates out one night, Shaw realizes that she's not the only one who feels the same way—there's an entire underground bar of people who do, too. Oh, and the owner of the bar happens to be portrayed by none other than Rosie O'Donnell, who played Doris Murphy in the original film.

From that first moment between Shaw and Gill to Max being rejected outright at tryouts, the series became something more—it was saying...something. Not just that baseball isn't only for men, but that baseball is for everyone—and even more so, that everything should be for everyone.

As hilarious and uplifting as the show is, it balances itself out with a few tough-to-watch, hard-hitting moments that really make you wonder how life was actually like this less than 100 years ago, as well as how—in many parts of the country—it still is.

While the original movie focused more so on the task at hand of being on a women's baseball team, Prime Video's A League of Their Own doesn't exclusively constrain itself to that. Taking the best parts of the 1992 film and adding to it, this series opens itself up to a world that most likely did exist within the world surrounding the All-American Girls Professional Baseball League.

And yes, I will admit to tearing up when those Rockford Peaches uniforms were finally unveiled. You know, because there is crying in baseball.