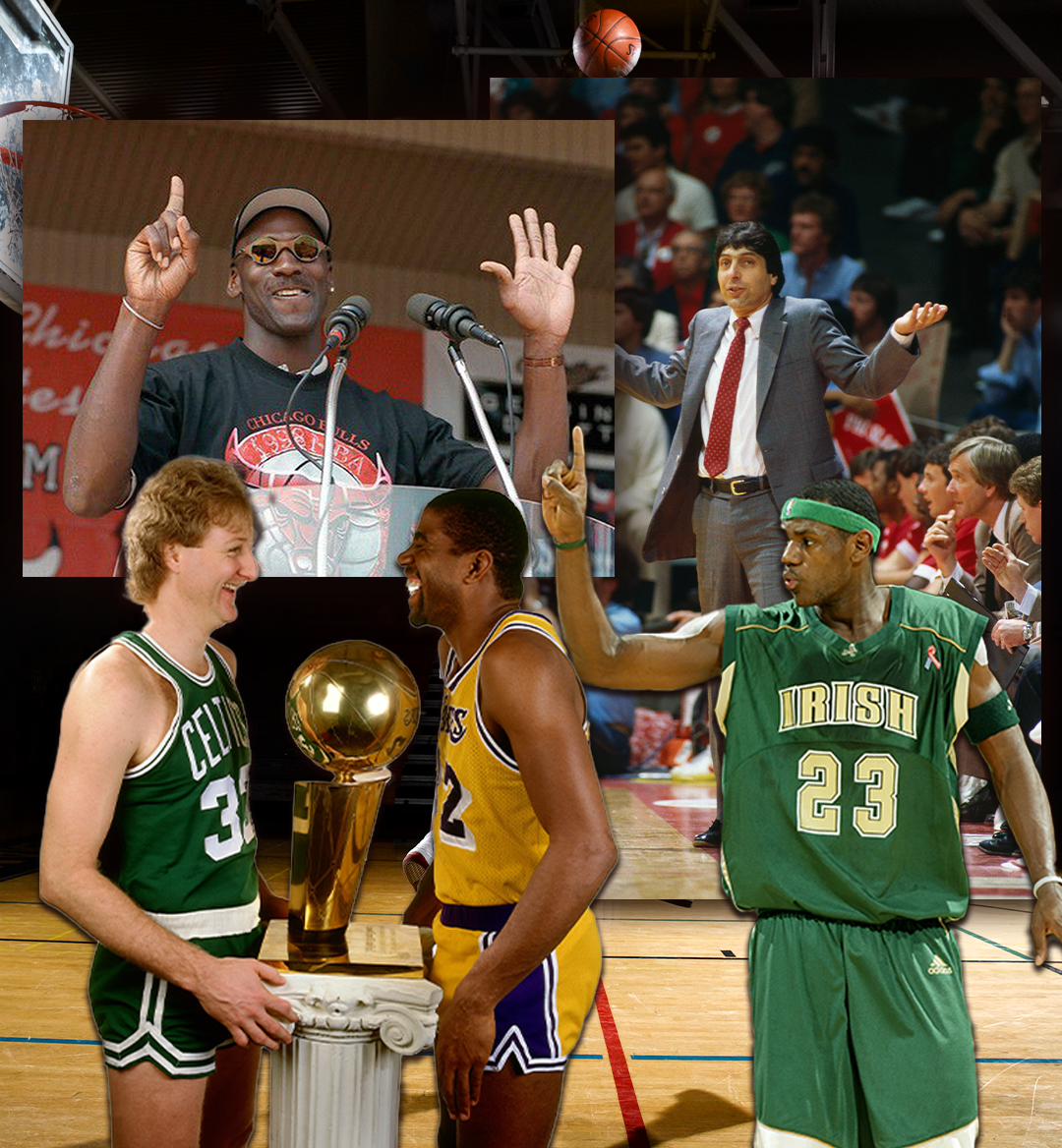 The game of basketball has given so much to us as fans. Throughout the NBA’s 75-year history, a number of athletes and moments have shaped the league into what it is today. The history of the NBA may not go as far back as other professional sports leagues, but the impact that it’s had on the culture is unrivaled. If you’re looking to get educated on some of the most iconic NBA moments and stories, here are the best basketball documentaries.

Some may debate who the GOAT of basketball is (The answer is Michael Jordan) but there is no question what the best basketball documentary of all time is: The Last Dance.

This 10-part docu-series takes us behind the scenes of the 1998 Chicago Bulls championship run, dubbed “the last dance” as it was widely known that the team would be blown up the next season. The series gives us an intimate look at Michael Jordan's rise to prominence, with exclusive interviews from former teammates and rivals. If you ever wonder why many consider Michael Jordan the greatest basketball player of all time, just give The Last Dance a watch and all your questions will be put to rest.

2.) Magic And Bird: A Courtship Of Rivals

The 2010 documentary highlighting the illustrious rivalry of Magic Johnson and Larry Bird is one of the most important pieces of basketball content that exists. During the 1970s, the NBA was dangerously close to collapsing as league attendance and interest, in general, began to diminish. In 1979, Magic Johnson and Larry Bird would face off in the NCAA National Championship game, which is still the most viewed basketball game ever. Magic would be drafted to the Lakers and Larry to the Celtics just a year later, setting in motion the greatest rivalry in NBA history. I highly recommend this documentary, especially if you’re interested in what the NBA was like pre-Michael Jordan.

One of the most important moments in basketball history that helped grow the game to new heights was the rule change allowing professional basketball players to participate in the Olympics, starting in 1992. The change came after Team USA placed bronze in 1988 after losing to a much more experienced Soviet Union team. The 1992 Dream Team is highly considered the greatest twelve-man roster ever assembled, with eleven of the players being inducted into the Hall of Fame. Most importantly, the Dream Team introduced the game of basketball at the highest level to an international audience that had never experienced it before.

When talking about the best sporting events in general, March Madness undoubtedly sits near the top of everyone's list. What’s better than watching 64 teams made up of hungry and unproven college athletes battle their way through six single-elimination games in the hopes of claiming a National Championship?

The greatest Cinderella story in NCAA history belongs to the 1983 NC State Wolfpack, coached by the legendary Jimmy Valvano. NC State had to beat the likes of Michael Jordan at UNC as well as University of Virginia superstar Ralph Sampson just to reach the championship game. They would face off against a Houston team headlined by future NBA Hall of Famers Hakeem Olajuwon and Clyde Drexler. The championship game is one of the most memorable ever, with an ending you’ll have to see to believe.

The 1994 documentary Hoop Dreams remains one of the most intimate looks we get into the life of a high school basketball prospect. The film follows two basketball players from the inner city of Chicago who have dreams of making it to the NBA one day. The pair commute over an hour each day to play basketball at a predominantly white school in the suburbs of Chicago. What the film does best is show the real struggle that these kids go through on their basketball journey and how slim the odds are of making the NBA.

Spike Lee delivers an extremely thought-provoking monologue as he tells the hundreds of high school kids in attendance at Nike All-American Camp, candidly warning the kids “The only reason why you’re here… you can make their team win. If their team wins, these schools get a lot of money. This whole thing is revolving around money.” I highly recommend this documentary, as it will give you an entirely new perspective on the high school basketball circuit.

There has been no prospect in the history of sports as highly touted as the great LeBron James. James was a phenom the second he stepped on the court, distancing himself as the #1 prospect in the country by his junior year of high school. By his senior year, James had become a national icon and one of the most highly publicized athletes in the world. This led to St. Vincent-St. Mary adopting a schedule that saw them traveling the country playing nationally ranked teams. This saw a game where LeBron James would face off against Carmelo Anthony of Oak Hill Academy, the highest ranked player in the class above LeBron's.

The most interesting aspect of this documentary is watching how scrutinized LeBron is over the recruitment process, as he was given a suspension for taking jerseys in exchange for pictures. I don’t think it’s hard to realize why James decided to circumvent college and go straight to the NBA after watching this documentary. This doc was also the reason that Drake, Eminem, Lil Wayne, and Kanye West got together and cooked up the classic "Forever".

The story of Chris Herren is a cautionary tale of how dark and difficult life can be, even when it looks as though you’re a success. Herren was one of the best high school basketball players in the country in 1994, taking home Gatorade player of the year honors as well as being named to the McDonald’s All-American Team. Herren struggled with substance abuse, however, and it only got worse once he got to college. Herren would be introduced to cocaine, which he would fail multiple drug tests for and eventually be kicked out of Boston College.

After transferring to Fresno State, Herren would finish his collegiate career there and be drafted to the Denver Nuggets. Herren chronicles how his time in Denver was the best, as his teammates helped set him straight. After being traded the next year back to his hometown Boston Celtics, the temptations around him proved too much, and an Oxycontin addiction would spiral into full-blown heroin addiction. Herren has been sober since 2008 and now tours the country giving talks to aspiring athletes, warning them of the dangers of addiction.

We like to talk about the impact certain players had on the future of basketball and more specifically the NBA. The way Steph Curry revolutionized the three-point line, or how Michael Jordan made it possible for NBA players to sell themselves as their own brand. The 1990’s Michigan basketball team, dubbed The Fab Five, helped shift the culture of basketball back into the hands of the people that were playing it. Made up of Chris Webber, Jalen Rose, Juwan Howard, Jimmy King, and Ray Jackson, the team made two NCAA finals but would lose both. Most notably, Chris Webber would call a timeout late in the game when Michigan had none, leading to a technical foul that would ice the game.

The story of Ben Wilson is a tragic tale of how one of the highest touted basketball recruits ever, Ben Wilson, was shot dead outside his school in the inner city of Chicago. Wilson was remembered for being a sweet-natured and innocent kid who simply just loved to play basketball. This documentary gives an intimate look into how gun violence has plagued inner-city communities, which is still extremely relevant today. The film is directed by Coodie, who recently became widely known for his directing of the Kanye West documentary Jeen-yuhs.

Reggie Miller is one of the most overlooked NBA legends, in large part due to the fact that he was playing at the same time as Michael Jordan. Miller was an absolute dog in every sense of the word, constantly talking shit to opponents and hitting some of the nastiest daggers we’ve ever seen on an NBA court. The documentary chronicles Reggie Miller's rise to fame, including having to compete with his sister Cheryl Miller, considered one of the greatest female basketball players of all time. The film's focus however is on the 1995 Eastern Conference Semifinals, which saw Reggie Miller score eight points in 8.9 seconds amidst talking trash to Spike Lee who was sitting courtside.

Watch on ESPN+
Slide 1 of 3
Did you like this article?