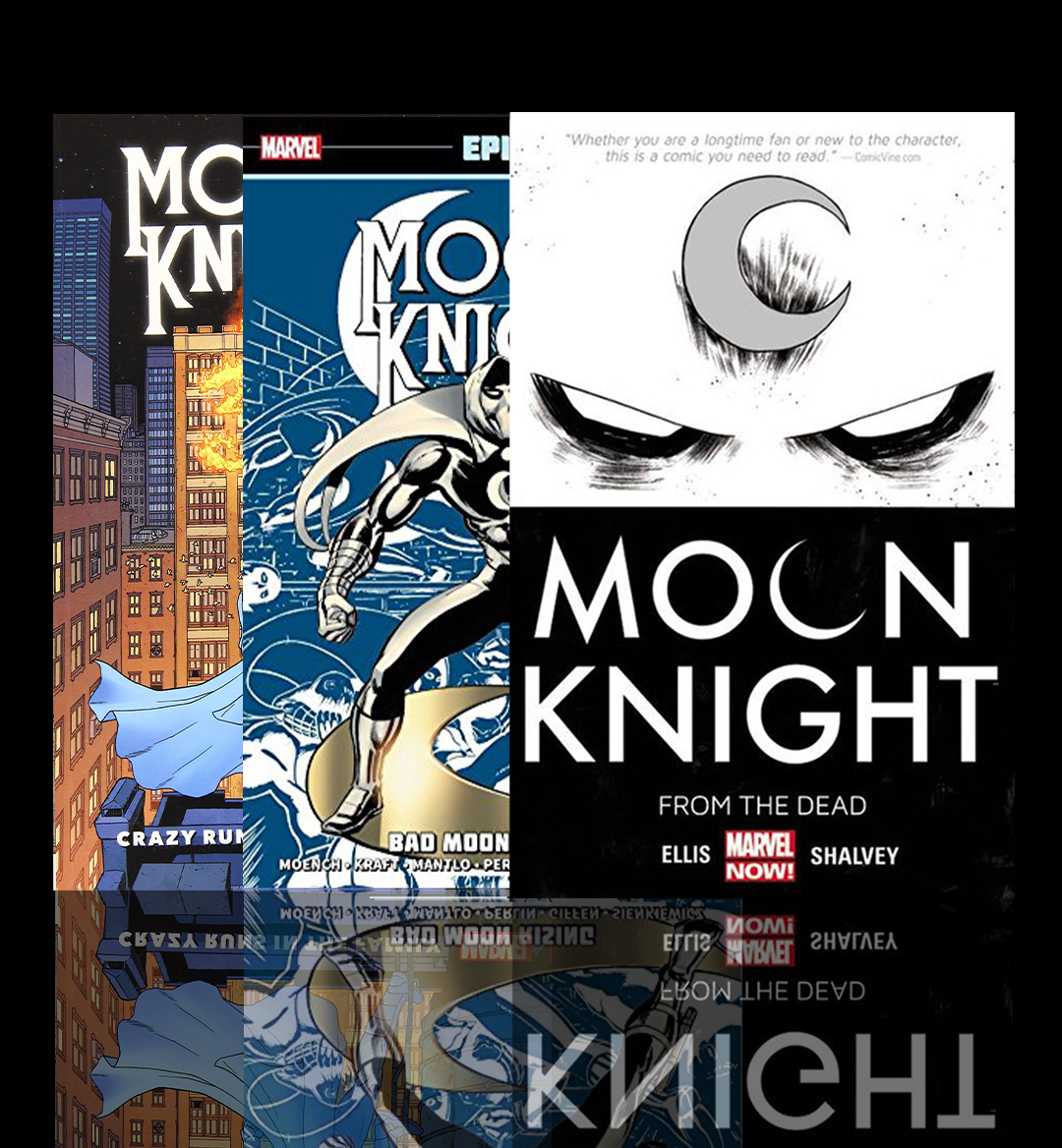 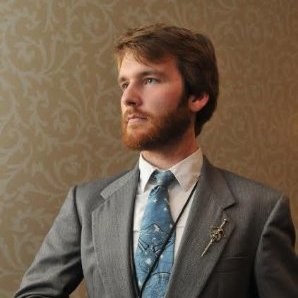 The first two episodes of the new Moon Knight show just dropped on Disney+, and if you can’t wait for the next one, there are plenty of Moon Knight comics out there to give you your fix and give you more insight on one of Marvel’s most bizarre heroes.

Like Wolverine and Punisher, Moon Knight started out as a minor villain in a book called Werewolf By Night. It’s an appearance that, spoiler alert: won’t be featured on this list. It’s fine, but unless you’re a completionist there’s really not much of the modern character in this appearance. He’s a standard mercenary named Marc Spector and has some moon-themed gear. That’s about it.

How that character evolves, from battles with other agents of his god to his own alternative personalities, is what’s helped make the character a staple of Marvel’s lineup, starting with: 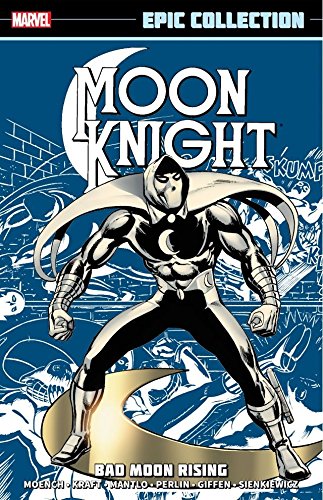 Alright, here’s where the good stuff starts. This collection includes the start of the first solo Moon Knight series. Launched in 1980 with writer Doug Moench and artist Bill Sienkiewicz, it’s a marked change in the character and introduces Marc Spector’s origin.

Spector’s start here is interesting and pretty unusual for a Marvel hero. He’s a henchman for a mercenary called Bushman, but he has a sudden attack of conscience a few issues in, when Bushman is about to kill innocent people and himself gets struck down by his boss. He’s brought back by the Egyptian god Khonshu and starts his work as a superhero enacting the god’s wrath.

So how is it as a book? It’s fine, but there’s much better ahead. And skipping ahead a little bit… 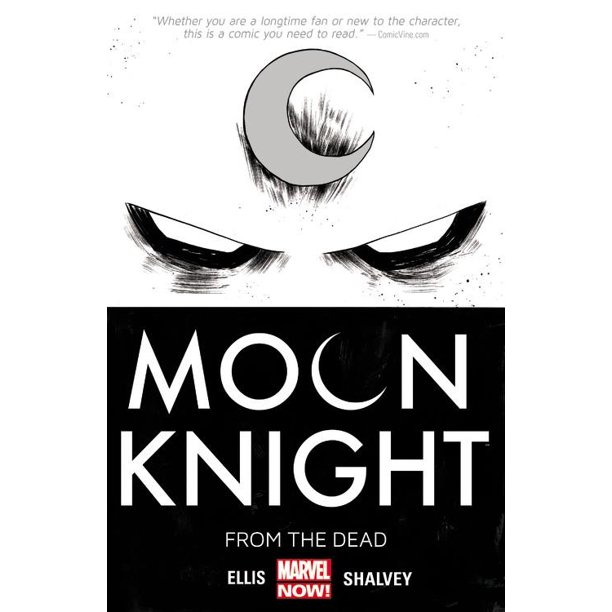 If you read one Moon Knight book, this is it. It’s a fairly short run by writer Warren Ellis and artist Declan Shalvey, only 17 issues, but it’s one of those character-defining runs that’s outstanding both for longtime fans and newcomers. Each issue acts mostly as a standalone story, playing around with panel layouts and genre storytelling in ways evocative of greats like Grant Morrison’s Animal Man or Alan Moore’s Watchmen. 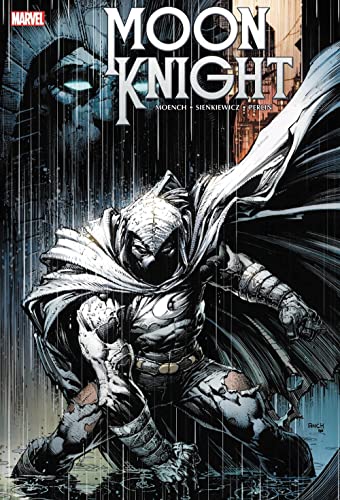 Second only to the 2014 run, the 2006 series with Charlie Huston writing and David Finch, Danny Miki, and Frank D’Armata on art should also be the go-to for anyone looking for good Moon Knight stories. In the mid-2000s, Marvel really ran some of its heroes through the wringer. Like Bendis’ Daredevil, Huston’s Moon Knight is a hero at a real low. He’s lost his friends, love, and the patronage of Khonshu. It’s a pretty brutally rough series and lavishly gritty if that’s what you go for. 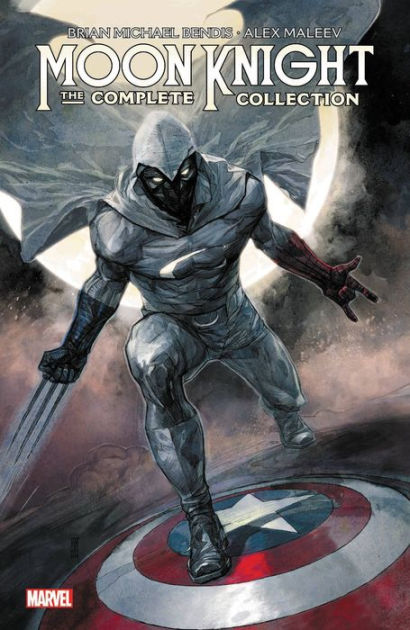 Controversial opinion among Moon Knight fans: I like the Bendis and Maleev Moon Knight mini-series. It doesn’t have the most sterling reputation among fans, marking the start of Bendis’ star fading from his acclaimed Daredevil run to his pretty derided Guardians of the Galaxy run, but there’s enough of the creative spark from Daredevil that makes this run worthwhile. Also, Maleev doesn’t miss, and his work on Moon Knight is no exception.

Spector is back on the West Coast and is, seemingly, in the big leagues as he teams up with some of the A-list Avengers to take down a criminal operation. Without spoiling anything: it’s not as simple as that. 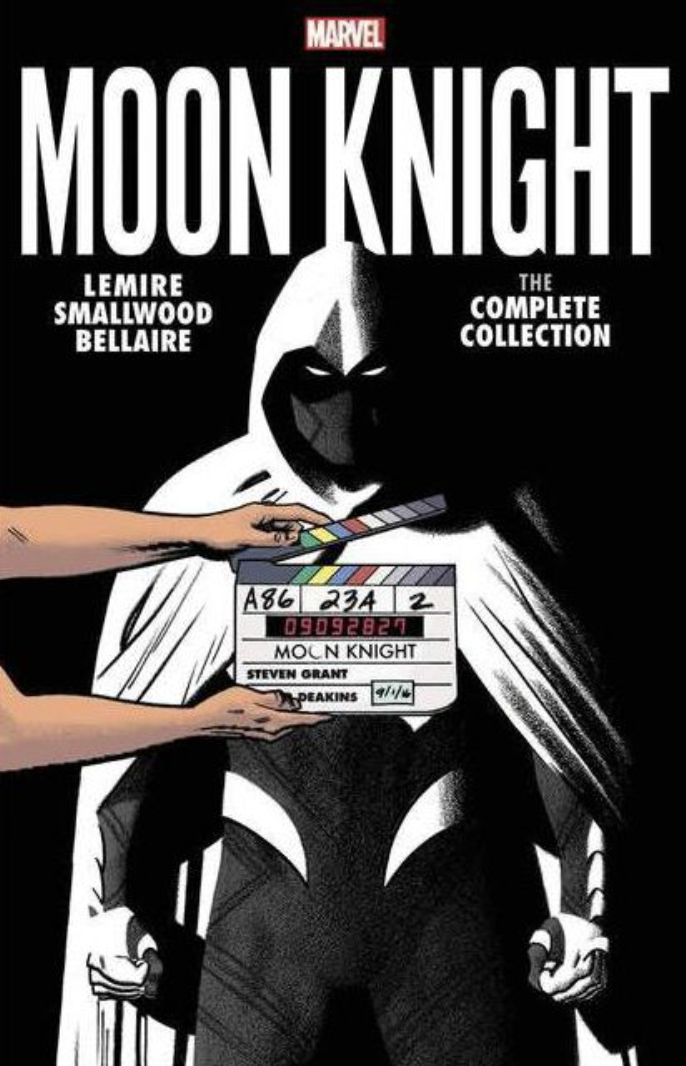 Following the Warren Ellis run is a tall order, but the series by writer Jeff Lemire and artists Greg Smallwood and Jacob Thomas handles the task admirably. Moon Knight has a reputation as one of the more mentally unstable heroes, and Lemire capitalizes on that by having Spector institutionalized in a facility where he’s unable to separate his grimy surroundings from Khonshu’s fantastical visions. The story is good, but the way that art seamlessly blends mundane New York and a cosmic vision of Egyptian mythology is the real star. 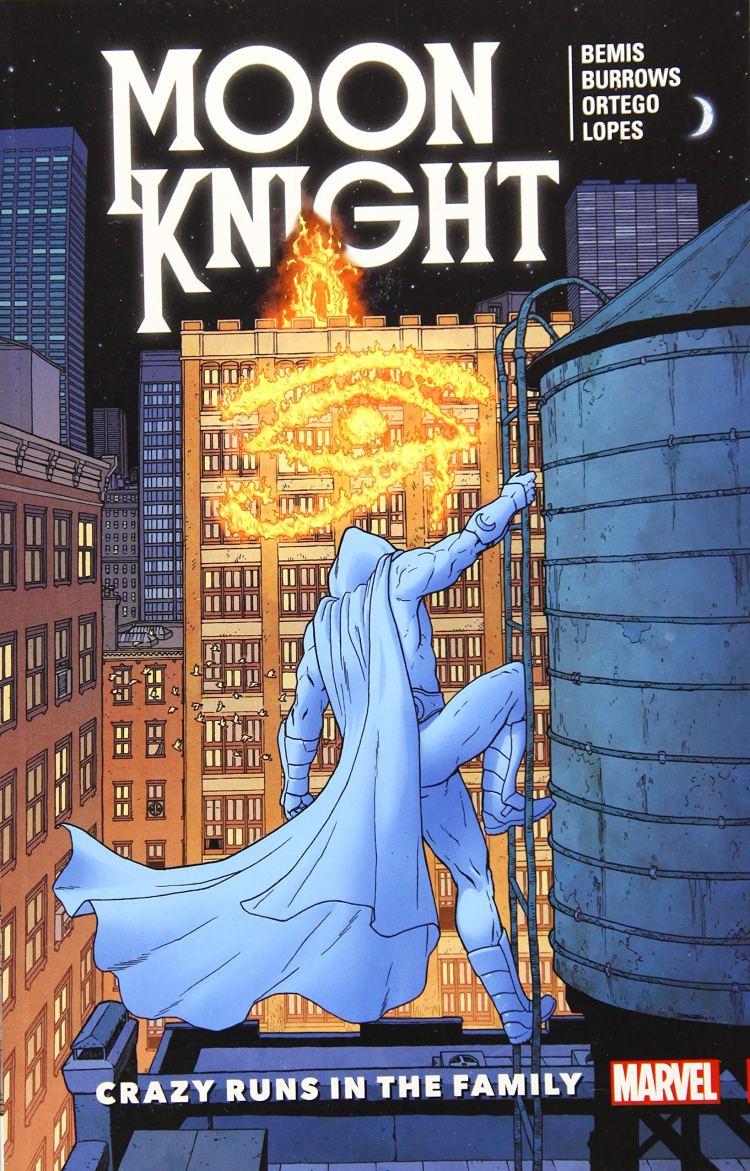 Following Lemire’s run on the character, writer Max Bemis and artists Jacen Burrows and Mat Lopes lean in on the mental health angle with a new villain that acts as a dark mirror to Spector. Moon Knight struggles not only with the conflict between his personalities but also with a new villain called The Truth, a mental patient able to peer into others’ minds and drive them to madness. Bemis handles the topic with more care than some others on this list, and the result is an arc that feels poignant. Almost as impressive, Bemis manages to set up some significant changes to Moon Knight’s life that open up new opportunities and challenges for Spector. 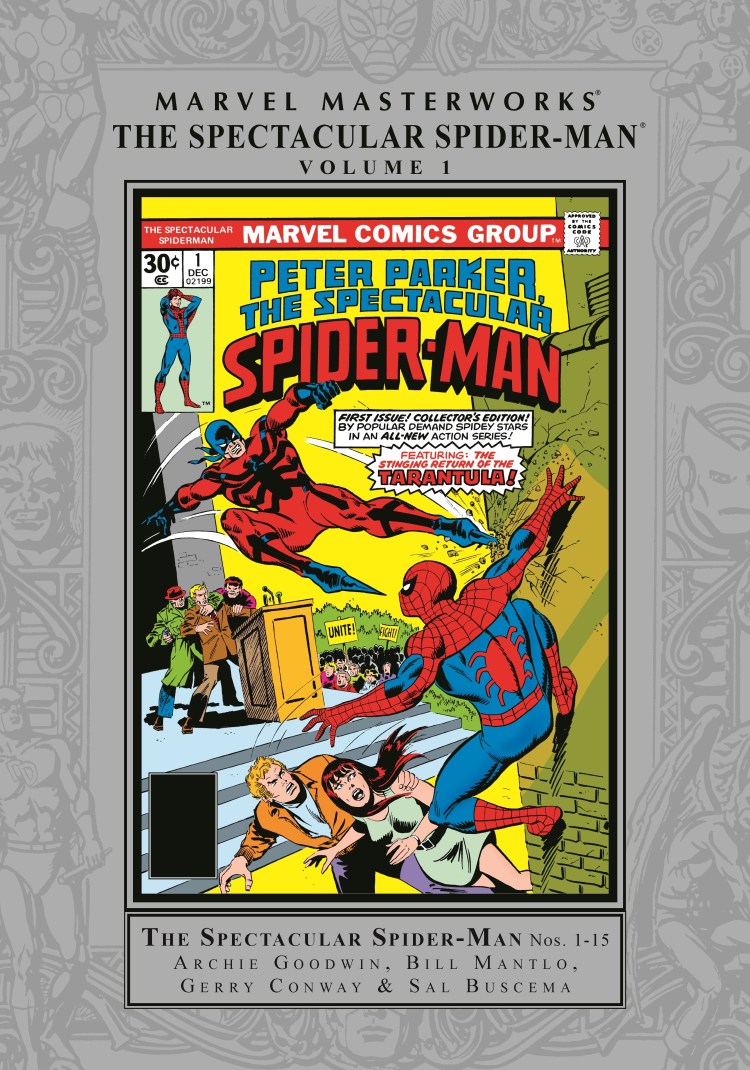 It’s not the first Moon Knight team-up with the good guys, credit for that probably goes to Defenders #47, but this arc is a lot less messy than that issue. The story is a pretty boilerplate “good guy who doesn’t kill, fighting a good guy who does kill” story commonly seen with crime-fighting contemporaries like Daredevil and Punisher, but it’s an effective setup that helps sell Moon Knight as a fairly gritty opposite to Spider-Man in spite of his outlandish costume. 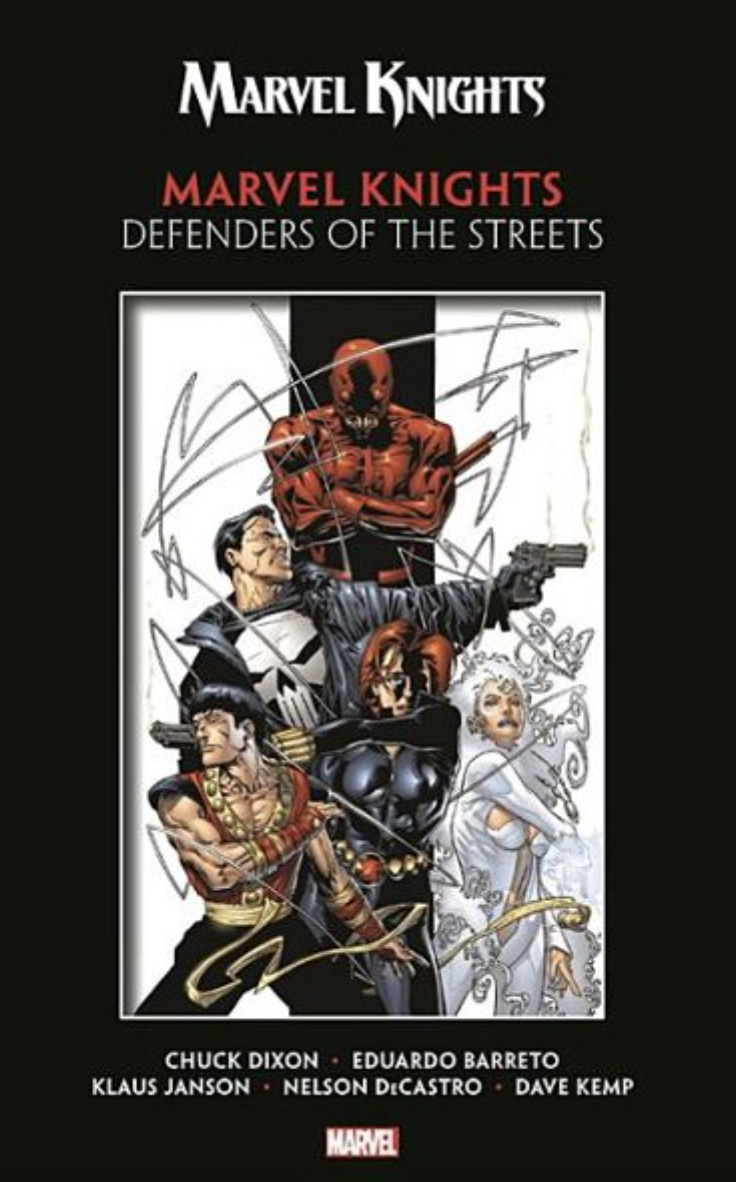 As aforementioned, there are earlier Moon Knight team-ups, he was even on the West Coast Avengers in the 80s, but he really finds his footing in this totally-not-Defenders group up of various street-level heroes like Punisher and Daredevil. Recent series have pretty wisely not emphasized Spector being loaded with cash, but here Spector acts as the financier of their operation and the gadgets guy. It’s a niche role he fills pretty well. 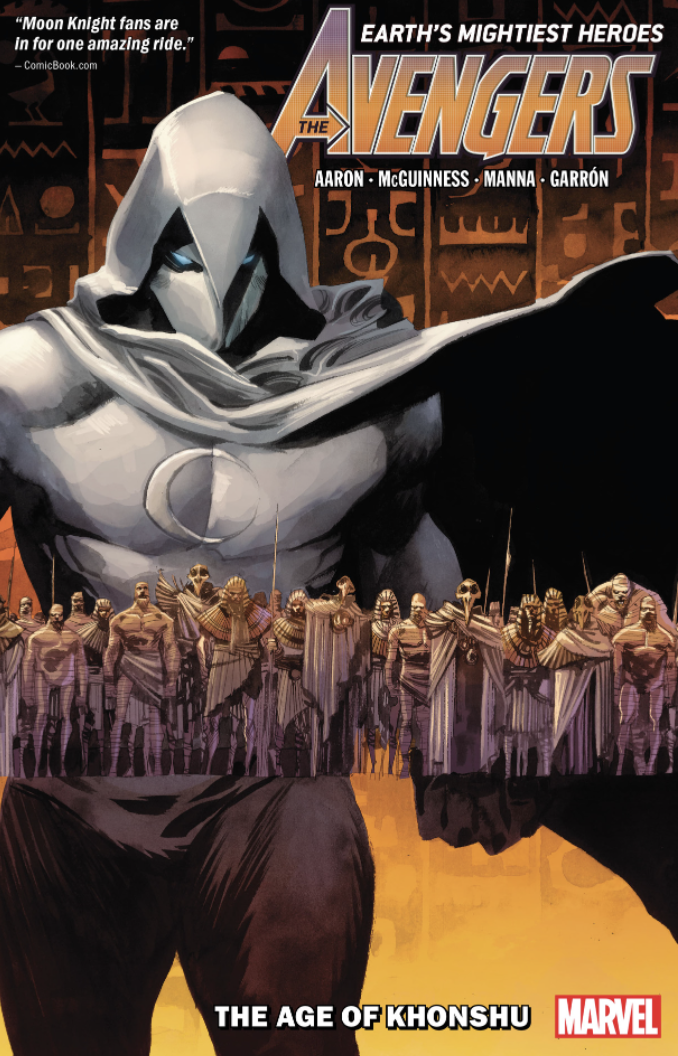 A supermoon amps up Khonshu’s powers and the god seemingly has his sights on world domination. As his earthly agent, Moon Knight is beholden to follow the Egyptian god’s will, which obviously sets him on a collision course with his friends and allies in the Avengers. It’s Moon Knight at max power, taking on the likes of Thor in some wild fights.

Is it good though? Eh, not really, but it’s still a pretty fun and unique set-up for a Moon Knight story even if it squanders some of that potential.

There’s a concept called “blue-orange morality”, where a character’s moral spectrum is so distinct from “normal” that what’s good or bad for them isn’t comparable to anything on the black-and-white spectrum. Age of Khonshu is at its best when it leans into the Egyptian god not seeing good and evil the way modern superheroes might, but it loses some of that as it inevitably has to wrap up in a restoration of the status quo. 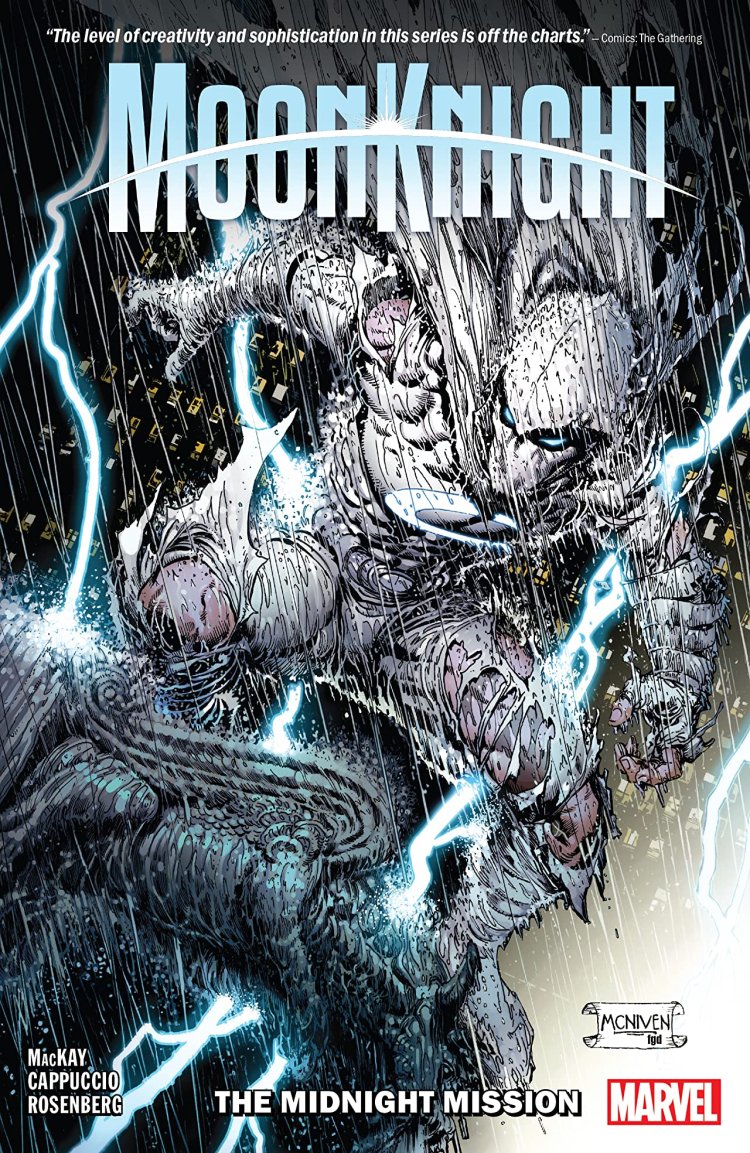 Trying to right some of the wrongs from Age of Khonshu, the Mr. Knight personality opens a shelter for those in need and starts to take on the “duties” of the wayward Egyptian god, but the new mission leaves Moon Knight contending not only with gangs and other traditional enemies but with rival worshippers of Khonshu who view this new imperative as heresy. Like the eponymous hero, writers Jed Mackay and artists Alessandro Cappuccio and Rachelle Rosenberg also work through the unenviable task of rehabilitating the scorned hero, and it makes for a quality series.

buy comic here
Slide 1 of 3
Did you like this article?