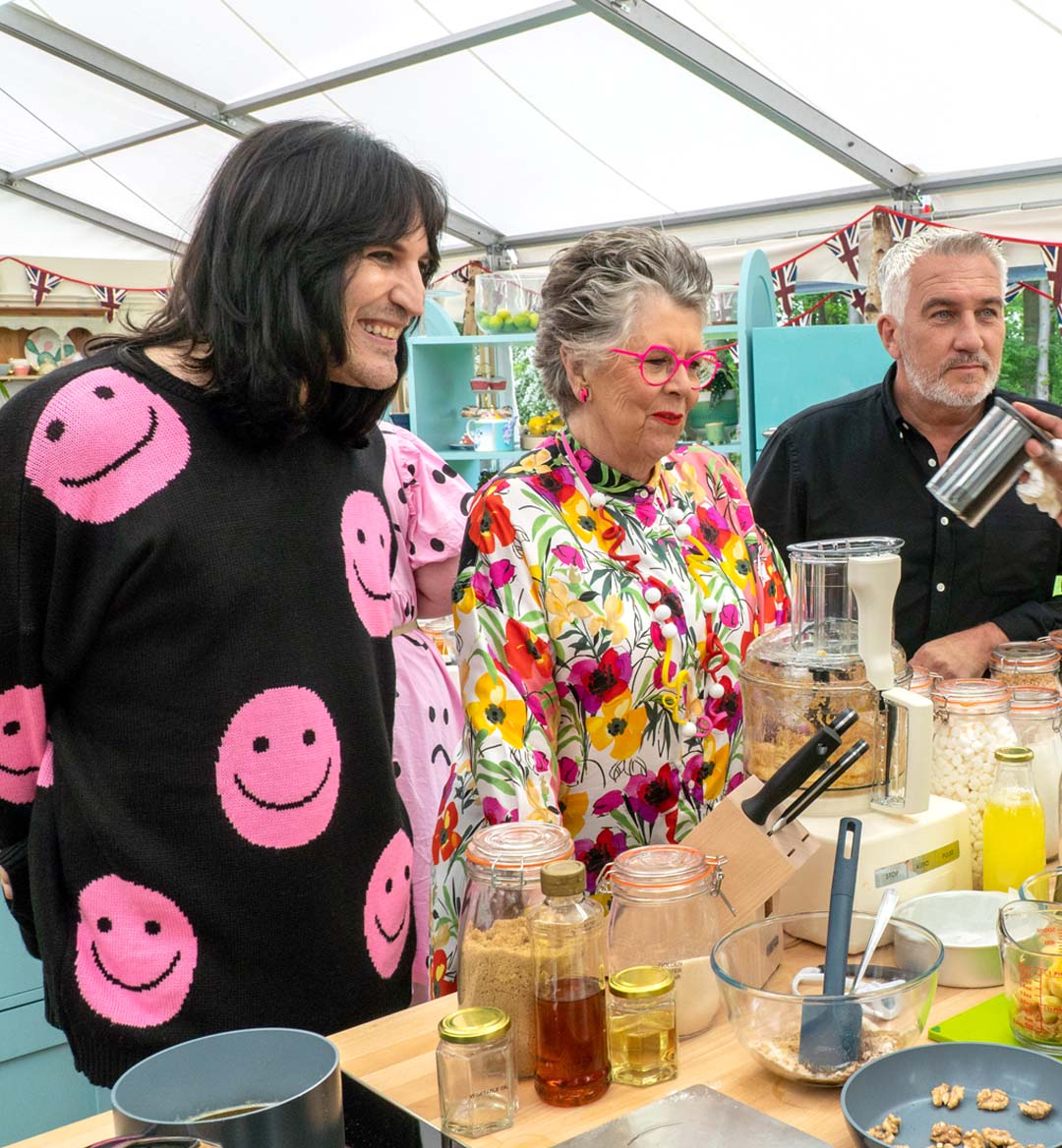 At this point, it feels like reality shows have been getting greenlit since the dawn of time, with series that take on just about every niche interest you could possibly dream up.

Shows about getting conned by random people online? They've got you covered. A series about selling glorified junk? Check. Two women trying to convince their friends that they should get the hotel suite with the bathtub because they're sharing a room? Yep, even that.

Though the sheer amount of shows extends way beyond this, we've rounded up 31 of the best reality TV shows for when you need a good dose of, well, anything.

Because if camping wasn't bad enough, there's nothing quite like getting purposely lost in the woods—or the arctic, or the rainforest—for a cash prize of $500,000. Contestants on Alone are dropped off at an undisclosed location with the goal of out-surviving the others for as long as it takes.

It all started off with the Real Housewives of Orange County on Bravo, and from that moment on in 2006, the franchise has evolved time and time again, extending itself into other cities and countries. Following Orange County in order of their premiere dates, the other cities in the franchise include New York City, Atlanta, New Jersey, Washington, D.C., Beverly Hills, Miami, Potomac, Dallas, Salt Lake City, and Dubai.

Now, is this one of the best reality TV shows of all time? That's a firm yes.

Jersey Shore first kicked things off back in 2009 in Seaside Heights, N.J., basically launching a cultural movement while shining a newfound light on the state that made everyone outside of it believe that all New Jerseyans were unhealthily-tan with short fuses. Aside from that, the show itself has had a number of reboots and spinoffs since the original series ended, including Snooki & JWoww, The Pauly D Project, and Floribama Shore.

The original cast returned in 2018 for a reunion series called Jersey Shore: Family Vacation, which has run for five seasons.

Below Deck is another Bravo original with quite a few iterations of its own, including the original Below Deck, Below Deck Mediterranean, Below Deck Sailing Yacht, and Below Deck Down Under. Each series follows the crew of a superyacht, with the captain being one of the mainstays of the series paired with a (mostly) new crew that rotates in each season.

An almost no-rules version of The Bachelor, Love Island simply dumps a bunch of single people onto a villa on an island in an effort for some of them to find the loves of their lives. However, this usually results in quite a number of different arguments, misunderstandings, and other twists that really test the relationships being formed.

The updated version of the original 2003 Queer Eye for the Straight Guy, Queer Eye not only brings in a new cast, but they also don't limit themselves to giving life makeovers to straight men in need. Comprised of Antoni Porowski, Karamo Brown, Jonathan Van Ness, Tan France, and Bobby Berk, the cast of the series—through fashion, cooking, grooming, home, and lifestyle lessons—give those nominated a completely new outlook on life.

With its 43rd (yes, I know) season premiering in September 2022, Survivor has really stuck it out since its first season aired in 2000. The sheer staying power of this series cements it as one of the best reality TV shows around. Basically, a bunch of strangers are thrown onto an island, separated into different teams, and are competing to be the sole survivor for a grand prize of $1 million.

A Bravo original series, The Rachel Zoe Project tracks the eponymous celebrity stylist both in her life and work as she manages the fashion and styles of her A-list clients. Since the series aired, Zoe has been able to create an empire of her own, spanning her own media site and a fashion label.

Jeff Lewis stars in Flipping Out, a Bravo series that follows the real estate house-flipper and designer as he manages his own business. The show also tracks his personal life, including the tight-knit relationships he has with his co-workers (who also work in his house) as well as his romantic relationships.

A spinoff series based on the documentary of the same name, Catfish is all about holding people accountable and figuring out if the people we meet online are actually who they say they are. And a good portion of the time, they're not. This is definitely one of the best reality TV shows for a good refresher on how freaky the internet can be.

This Bravo original packs a bunch of twenty-somethings into one house and keeps the camera rolling. The show switches up the physical house to various different estates in the Hamptons and follows an ever-changing group of city-escaping New York friends as their various relationships bud and unfold all in one place.

Much like the Real Housewives franchise, Million Dollar Listing has also expanded itself to different cities, with iterations including Los Angeles, New York, Miami, and San Francisco. Each series follows a few real estate agents and the houses they're selling, their clients, and their intertwined relationships with one another.

Originally titled Keeping Up with the Kardashians, the series took on a shorter name after moving over to Hulu for its new home. Regardless of the name, the series tracks the Kardashian family and each family member's life, as well as integrating the lives of their children, family friends, partners, and the public at large. While many have issues with the series, it's definitely one of the best reality TV shows out there, if not one of the most iconic.

A Netflix original that aired in 2021, My Unorthodox Life is about Julia Haart's life as a former Orthodox Jew, as she's now the CEO of a modeling agency in New York City. Not only does it highlight her decision to leave her tight-knit Jewish community, but it also shows her children's experiences and feelings about the decision.

Pawn Stars puts a spotlight on The Golden & Silver Pawn Shop in Las Vegas run by the Harrison family, who are devoted to deciphering what's worth the money and not when it comes to discovering rare items. Each episode focuses on a few different items that customers bring in to sell to the shop, though what they think it's worth doesn't always line up with its actual price is.

Who doesn't love rummaging through abandoned storage units for rare finds? Storage Wars follows the people who do just that for a living as they attempt to bid and win these storage units for a chance at finding some lost—and potentially lucrative—treasure.

Patti Stanger is the millionaire matchmaker in this appropriately-named Bravo series that follows her matchmaking business as she limits her customers to the uber-wealthy. At the same time as the show focuses on the clients at hand, we also get a glimpse into Stanger's personal life and daily dealings.

The most successful Housewives spinoff to date, Vanderpump Rules tracks former Real Housewives of Beverly Hills star, Lisa Vanderpump, and her massive restaurant empire in Beverly Hills. While it's about Vanderpump's restaurant, the series dives more into the often-explosive relationships of her staff at SUR Restaurant and Lounge.

Easily one of the most iconic reality shows of all time, The Simple Life follows Paris Hilton and Nicole Richie as they move onto a farm with a random family for a dose of reality. Though that was the premise of the first season, each following season featured a new gimmick, with the two eventually taking a road trip, being hired as interns, taking on the wife-life, and going camping. As one of the O.G. reality series, it definitely deserves a spot among the best reality TV shows ever made.

Ah, the infamous 90 Day Fiancé. Basically, the set-up is this: a long-distance couple has 90 days to figure out if they want to get married. The prospective fiancées travel across countries to meet each other, but the only catch is that they have a limited time until their Visas expire, meaning that the decision really has to be made quickly.

A series that has been going strong since 2009, RuPaul's Drag Race is hosted by none other than RuPaul, the eponymous drag queen and main judge on the show, which he rules over alongside a few mainstay judges and a weekly guest. The show is a competition that pits drag queens against each other in a number of different challenges in order to ultimately win the entire season.

The Bachelor brings together a horde of women all competing to become the fiancé of whoever is the bachelor that season. There have also been a number of spinoffs of the series, including The Bachelorette and Bachelor in Paradise.

This reality competition show is hosted by Julie Chen Moonves, who leads contestants through their stay at a house with random strangers. Basically, they're all cut off from the outside world and are voted out one by one for the chance of winning a cash prize at the end.

Ah, the beloved Great British Bake Off. In this series, contestants have to bake their way through a number of different challenges all in an effort to impress the judges and stay in the game. The main judges currently include Prue Leith and Paul Hollywood, with the other presenters being Noel Fielding and Matt Lucas. Not only is this series one of the most calming around, but it's definitely one of the best reality TV shows out there.

The Amazing Race has almost been around as long as Survivor has, though this series started just about a year later in 2001. The reality show brings teams of two together to travel the world and win each leg of the massive race, trying to solve various challenges and clues along the way to the finish.

Welcome to Gordon Ramsay's O.G. hellscape. Hell's Kitchen pits two teams of chefs against each other in order to compete for a coveted spot as head chef at a restaurant that Ramsay himself chooses. The series has been going strong since 2005, with its 21st season airing in September 2022.

Netflix's original series, Blown Away, showcases the captivating world of glass blowing, with contestants facing off against each another for the ultimate prize: a residency at the Corning Museum of Glass. Not only is the series high-stakes for that reason, but it's also incredibly fascinating to watch, as each artisan takes special care in crafting their pieces.

Netflix's Selling Sunset brings together a group of real estate agents at The Oppenheim Group in Los Angeles, tracking each agent's life as they compete against one another for each listing. It turns out that the real estate world can be just as cutthroat as the Real Housewives.

Aspiring fashion designers go head-to-head in Bravo's Project Runway, one of the oldest fashion design competitions there is, as the series first began in 2004. While Tim Gunn and Heidi Klum are known best for hosting the show, over the years, we've seen tons of hosts, judges, and mentors come through, including Nina Garcia, Michael Kors, Zac Posen, Karlie Kloss, Brandon Maxwell, and Elaine Welteroth.

Having been on the air since 2006, Top Chef has gained a massive, devoted audience over the years, as it has chefs go head-to-head and compete for the legendary title of "Top Chef." There have been tons of spinoffs of the series, including Top Chef Juniors, Top Chef Masters, Top Chef: Just Desserts, Top Chef Amateurs, and Top Chef: Family Style.