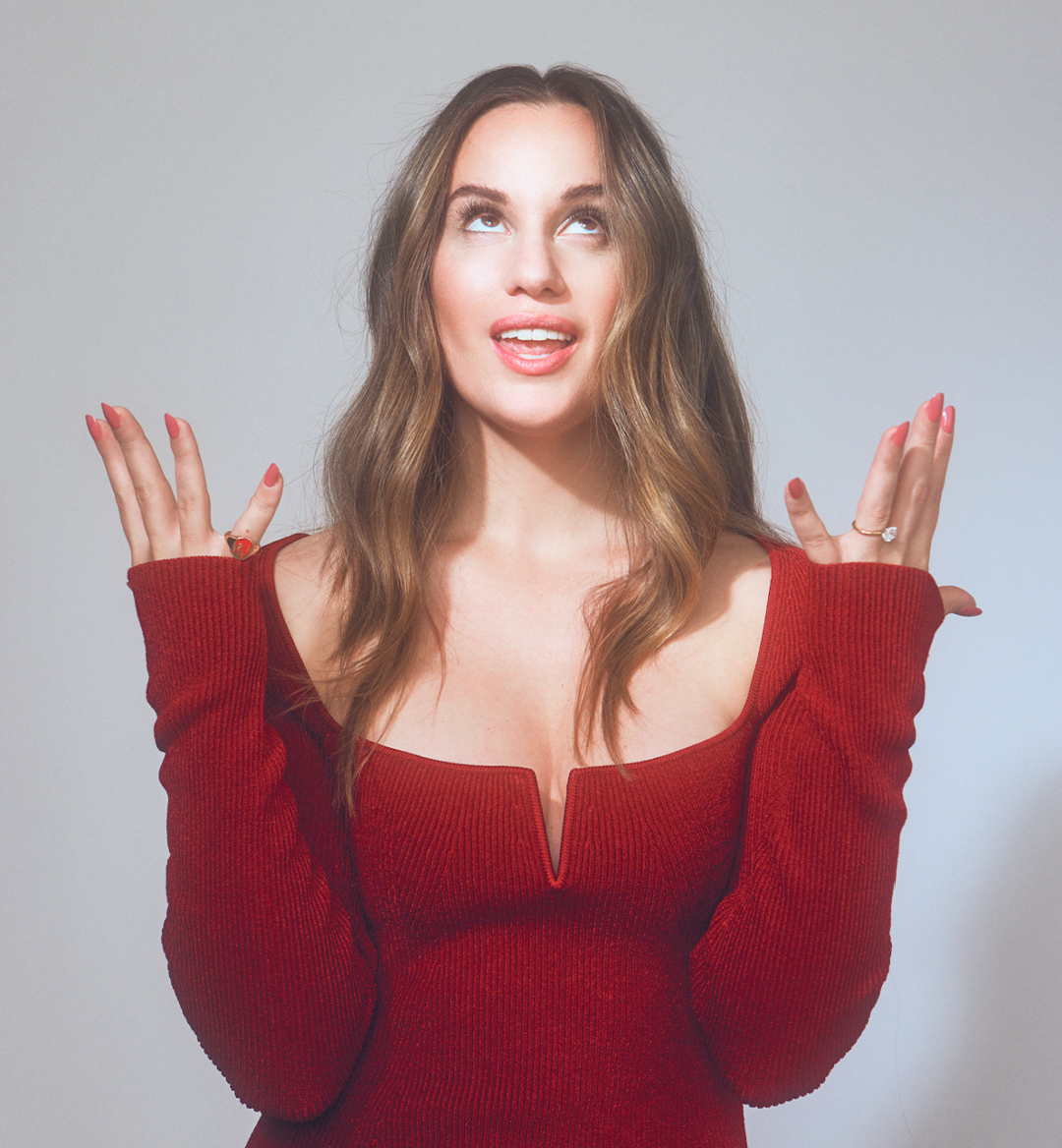 Hannah Berner has a kink for going viral.

After working in media for a while, Berner decided to take on the chaotic beast that is reality television. She starred for three seasons on the Bravo series, Summer House, leaving the show after Season 5 to pursue something completely different: stand-up comedy. For some gazing in through the window, it may have seemed like an odd move, but for Berner, it was just the opposite.

"The way that my career evolved—it was actually a natural next step for me," Berner says. "I got asked to do a live podcast show at Caroline's in New York City and my friend literally dared me to do 10 minutes of stand-up; I had a lot of viral tweets, so I was writing all these jokes but I didn't consider it stand-up. So, the first time I did stand-up it was in front of 300 people." 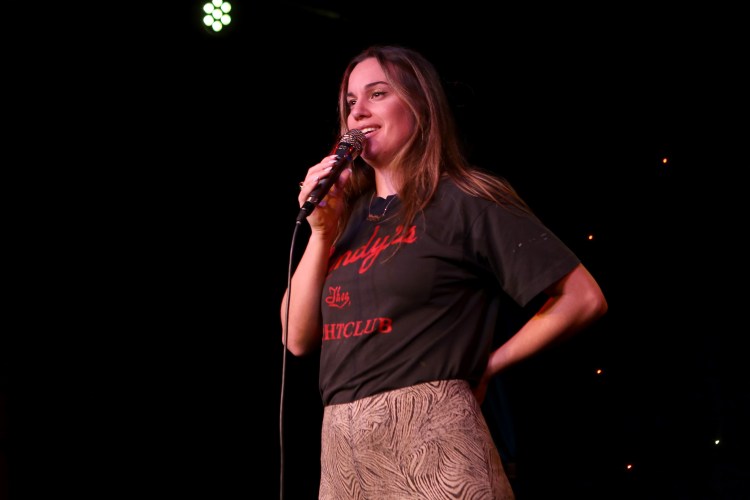 Those first 10 minutes at Caroline's quickly evolved into more and more time on stage and behind mics. Berner enjoys the journey of comedy—even if some of her jokes might not hit well every single night, she's still proud of taking that leap to put herself out there. While working at Betches Media, she learned about joke structure through the construction of tweets and memes, though she realized over time that her own voice was worth exploring even further than her work at the office. She started coming up with funny Instagram videos and tweets on her own time, which slowly snowballed into stand-up comedy.

"You can write as much as you want sitting around, but I try to find normal situations in life. I'm always thinking in the back of my head, 'How is this funny, or how can I use this as content?', which is probably not healthy, but that's how I live my life," Berner says. "I'll think of a concept on the Uber ride to the club and then on stage, I'll flesh it out; sometimes you come up with the funniest things when you put pressure on yourself in front of a crowd to come up with a punchline."

Doing stand-up in front of an audience of 300 is an outlier in the comedy world—most comics get their start doing a few minutes at an open mic show in front of other comics waiting to do their first few minutes. And that's not lost on Berner.

Being someone who's not a stand-up comedian or a part of that world, to me, the whole thing seems more akin to giving a speech as opposed to telling jokes; I got a C in public speaking, so I don't need to elaborate on how frightening the whole situation seems to me. Berner compares it more so to a give-and-take relationship with each side reacting to the other, likening it also to simply being funny within your own group of friends.

"I do think it's super important to be able to do well at a show in a basement with six people and then do a show in front of 500 people," Berner says. "That's part of becoming a good comic—it's not about being popular and saying popular jokes; it's about seeing how your material works in a lot of different situations with a lot of groups of people. I really like when people don't know who I am because then I know that they're laughing just because of the content." 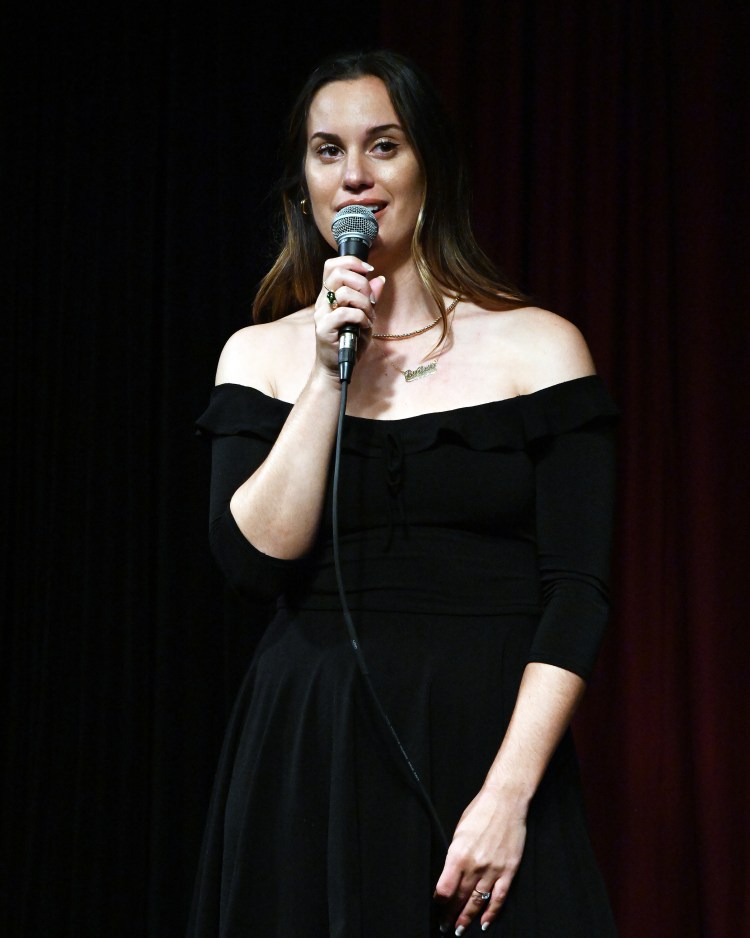 On top of making the rounds at bars and comedy clubs across the country while on tour, Hannah Berner also has two podcasts, Berning in Hell and Giggly Squad. Yeah, those are also in addition to the content she's already creating on a daily basis for her TikTok, which she has almost 750,000 followers on.

"I love going viral, it's my kink," Berner says of the platform.

Her podcast, Berning in Hell, focuses on the mental health aspect of life, with Berner interviewing tons of different people like comedians and other entertainers to get to the cores of themselves. Berner also pairs up with one of her best friends, Paige DeSorbo, for Giggly Squad, which is all about their lives, what's going on in the pop culture sphere, and whatever else is on their minds. Between all of those endeavors is a massive pile of content—but where each piece gets placed actually isn't as complicated as it seems from the outside looking in.

"Things are growing and gravitating and I use my gut on what works on what platform, but I have stopped tweeting as much because of TikTok," Berner says. "Now when I think of an idea, instead of tweeting it, I try to say it to the camera. I actually use TikTok as a writing practice where I'll say a premise to the camera and try to come up with a punchline. Honestly, having the digital content has been really beneficial to have your own virtual stage time."

Going off of that virtual stage idea, Berner makes the good point that it not only takes a bit of the edge off in trying out new material (and exposes the cult-like nature of bachelorette parties), but it's also a great starting ground for women and non-binary people looking to get involved in comedy. Being that the scene is largely dominated by men, it's a bit tougher for people of other genders to find a good way to approach stand-up comedy at first.

"I especially think for women in comedy, what people don't talk about is how it's really hard to travel alone, be alone in weird cities, go to bars at night where it's all men—women are less apt to do that," Berner says. "But when you can create content digitally, it does feel like a safer space for you to be yourself, and I think that's why we're going to see a lot more female stand-up comedians over the next couple of years, and I'm really excited to be part of that."