Buying Into Bud: Celebrities Who Have Invested in Weed 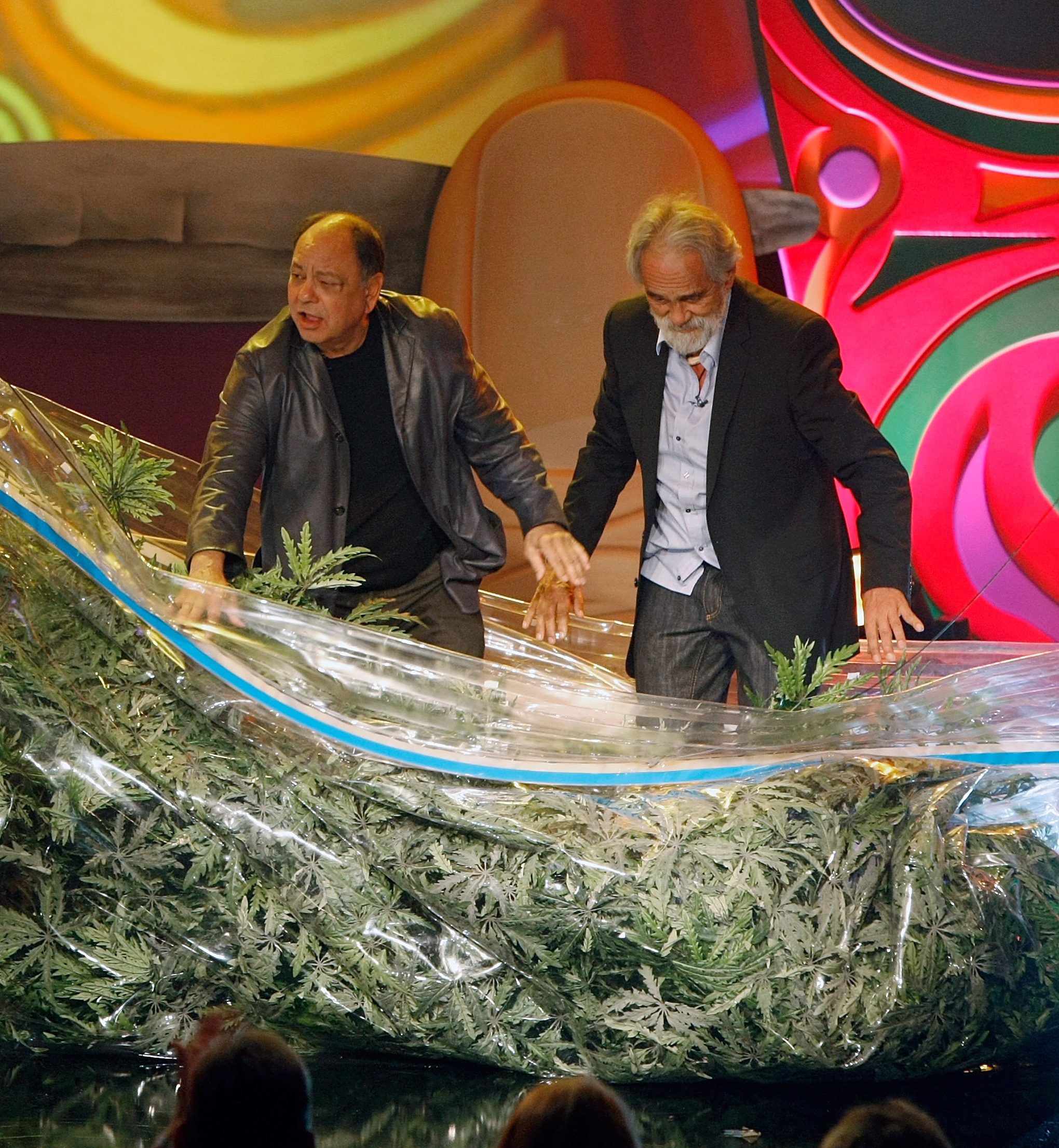 One of mankind's greatest philosophers and modern thinkers once said "I do have a plan for the country [the USA]. It needs education. And there should be drug education - only people should be taught how to smoke pot, because even potheads don't know how to smoke pot. I've evolved into not only an activist, but an educator. I want to show people how, when, and why they should smoke pot." That man was none other than Tommy Chong, half of the comedic duo 'Cheech and Chong'. That vision Tommy Chong had of educating the pot-smokers of the world has nearly come to full fruition. Marijuana is legalized in 21 states, with another 10 states decriminalizing the plant. Because of the new legislation, a lot of celebrities have been quick to get their hands in on the weed game. Here are 20 celebrities who have invested in weed.

It should come as no surprise that Snoop Dogg is an early investor in marijuana. A man who has built a brand on the image of smoking weed, Snoop Dogg founded Leafs by Snoop in 2015 when Marijuana became legal in Colorado.

The most distinguished celebrity brand of weed is undoubtedly Khalifa Kush. I still remember in high school hearing people talking about Khalifa Kush being so rare you would think these people were looking for the arc of the covenant. Because of the looser laws on marijuana, you can easily and accessibly enjoy Khalifa Kush now.

Tell your friends - Jim Belushi has the gas! pic.twitter.com/4zF7vIaAIH

Former star of According to Jim, Jim Belushi has gone as far as to rename himself "Cannabis Farmer: Jim Belushi" on twitter. You can head over to Belushi's Farm and get yourself some good grass of one of T.V.s former favorite dads.

Almost ten years I go, I envisioned having my own weed company. And today I can say that my company Houseplant's weed will be available in California next week! Also, Houseplant is making lovely Housegoods like ashtrays, lighters, and YES, even ceramics. https://t.co/TNjpWFhbWB pic.twitter.com/00xR8QKNH3

It can be said that no one did more to normalize the use of Marijuana in the 2000's than Seth Rogen. Rogen started House Plant in 2021, selling his own marijuana and accessories. There are some cool stoner tools on the House Plant website and I highly recommend giving it a look over.

One of hollywoods most beloved stars and a co-host of the view, Whoopi Goldberg is also an avid marijuana user. She started the brand Whoopi and Maya which unfortunately closed its doors in 2020.

One of the NFL's greatest tight ends and America's favorite party boy Rob Gronkowski is an investor in marijuana. Gronk invested in the CBD company CBD Medic, a topical cream to help elevate pain and inflammation.

First look at the products. Via CNBC.

The first products are pre-rolled cigars, pre-rolled joints and cannabis flower all retailing between $40 and $70 pic.twitter.com/w3wz1ZRomf

One of Brooklyn's finest and a GOAT in the hip-hop game, Jay-Z has distanced himself as an elite businessperson. The rapper has turned his brand into an empire valued at over $1 billion. He started the brand Monogram Company in 2020 and has found success in the space. The Monogram Company distinguishes itself from other marijuana brands by pushing the limits and quality of marijuana today.

One of the greatest punchers and personalities the sport of boxing has ever seen, Mike Tyson is an avid consumer of marijuana. He has said to have found it help him become more egoless in later stages in life and help with chronic pain. What's hilarious about his Marijuana company Tyson20Global is the branding. This holiday season you can get edibles shaped like Evander Holyfield's ear, a nod to when Tyson bit off a piece of his ear.

There is no trailblazer who did more to help legalize and normalize marijuana than country musician Willie Nelson. Nelson has been advocating the use of marijuana for decades and has become a symbol for the plant. If you want to toke on what the OG is, head over to Willies Reserve and get you some good green.

Willie Nelson may have normalized marijuana usage through music, but Tommy Chong did it through comedy. Cheech and Chong's early stoner films are truly pieces of history in the realm of marijuana and pop-culture. Cheech and Chong not only made marijuana look safe, they made it look fun. To get some grass from the greatest stoners to ever exist, simply go to Cheech and Chong Cannabis and find something you like.

Martha Stewart is for the streets and there is no way around it. Despite building a brand through DIY treats and tricks, Stewart has earned the respect and street cred from just about any and everyone. She invested in Canopy Growth back in 2020.

In the realm of entertainment, John Legend stands in a very special class. He is one of 17 people to ever win an EGOT (Emmy, Grammy, Oscar, and Tony) and is a top selling recording artist. He invested in the CBD brand Plus Hemp, a drink that helps give you a boost of energy to start your workout.

David Crosby is a musician who made up 1/3 of the band Crosby, Stills, and Nash. David Crosby has been a pioneer for pot-heads for decades, even serving prison time at one point for possession. The weed smoking legend started his own brand, Mighty Croz, where you can enjoy the same bud the legend himself is smoking on.

Al Harrington may not be a well known name, but to die-hard basketball fans in the early 2000s he's a certified legend. He helped make up the We Believe Warriors, who upset the first seeded Dallas Mavericks in the NBA playoffs. He invested in Viola, which has become a huge success in the Marijuana space.

Famed actor and former rapper Ice Cube is well known for his actions in the business world. Cube has produced a number of movies and helped build a bevy of brands into well established giants. He started the brand Caviar Gold which has over 2,000 stores across seven states.

Kristen Bell is an actor famous for roles in movies like Forgetting Sarah Marshall and shows like The Good Place. She's invested in Happy Dance, a CBD skincare product.

Jane Fonda is an actress, model, and women's rights activist. She has been an icon and staple in so many peoples lives for decades. She invested in Uncle Bud's, a CBD and hemp company.

The Mendi Co, a CBD company founded by #USWNT player Megan Rapinoe, announced its lineup of #Olympics2020 athletes who are partnering with the company. It’s interesting to note the dif way CBD and THC are treated in the international sports world. https://t.co/CIciCODQkz pic.twitter.com/52FNArOq4v

Megan Rapinoe was the captain of the U.S. Women's National Soccer Team and helped the team win two World Cup's. She's been a champion for women's rights and equal pay, cementing her legacy on and off the pitch. She is an investor in Mendi, a CBD company.

Terrell Davis is a former NFL running back for the Denver Broncos. He is the all-time leading rusher for the Broncos franchise and known as one of the best football players ever. He invested in Defy, a CBD drink company focused on giving athletes recovery.

Gwyneth Paltrow is an academy award winning actor and avid businesswomen. She has created a number of self-care products through her Goop brand. She is an investor in Cann, a THC and CBD infused seltzer.