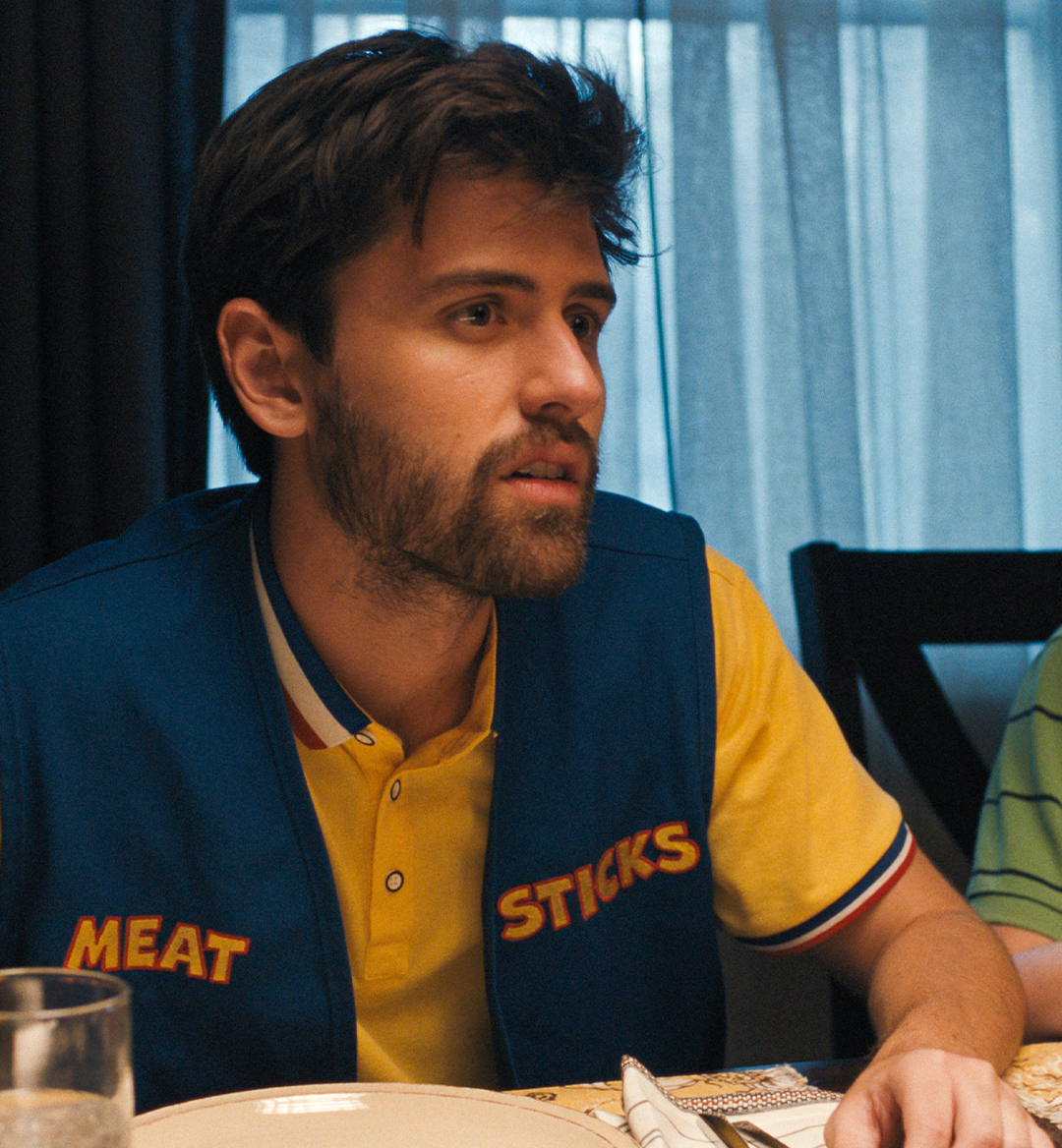 I'm usually fairly dubious about films written by, directed by, and starring the same person. Sort of like, "Who do you think you are, writing, directing, and starring in the same film? Don't you have other things to do?" I'm also skeptical of films with names like this one. Cha Cha Real Smooth? This can't be good. I'd say about 90% of the time, these films are never that great. The only problem with that theory is that this one's actually pretty good. 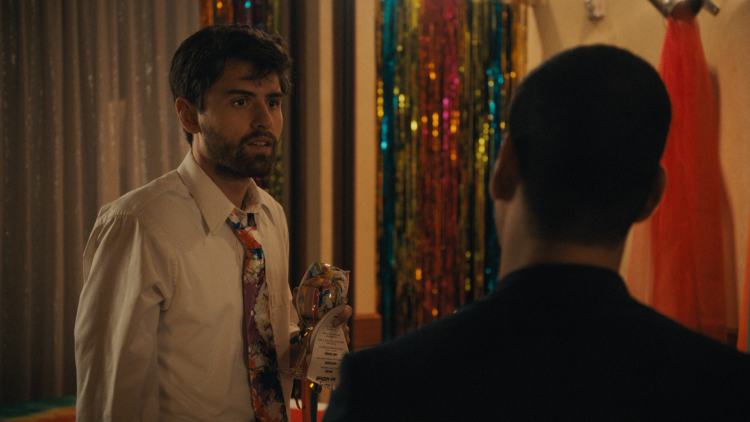 The writer, director, and actor in question is Cooper Raiff, who plays 22-year-old Andrew, a recent college graduate who has moved back home to good 'ole New Jersey—Livingston, to be exact (shout out to my NJ pals). Like every recent grad without much of a plan, he sits around for a bit, ponders life, and then finally decides that he needs to get a job. Naturally, he takes a gig at Meat Sticks, a gross-looking (and sounding) restaurant within a mall. Andrew's demeanor, though, doesn't resemble a person miserable at his job and in his current situation in life—he's the epitome of "when life gives you lemons, make lemonade," but not in the obnoxious way that you're probably imagining.

This dude is so likable, sweet, funny, and kind that it makes you almost expect that he will eventually flip on a dime and reveal that he's actually a terrible person at some point—but that doesn't happen. Andrew is just a genuinely good guy trying to figure out his life, and maybe some people will find that premise boring, but the way this film frames it kept me hooked the entire way through.

While he's still working at Meat Sticks, Andrew falls into another venture, though this time it's purely by accident. While attending a bar mitzvah with his 13-year-old younger brother, David (Evan Assante), Andrew becomes the de-facto party-starter as the shindig has a lame DJ and a lack of dancing guests. By the night's end, he's got a flock of Jewish mothers begging him to host their children's bar mitzvahs, which he ends up pursuing as a sort-of career.

Though he made multiple business connections at the bar mitzvah, Andrew also met Domino (Dakota Johnson) and her autistic daughter, Lola (Vanessa Burghardt), at the party. Domino's mysterious allure brought him over to the pair's table, where Lola was solving an extremely advanced Rubik's Cube with (what looked like) a million pieces in it. His task at hand? To get the pair up and dancing, which he successfully achieves after a little convincing (and with a $300 bet on the line).

The main plot revolves around Andrew's day-to-day life, but Lola and Domino are quickly mixed into things as he starts babysitting for Lola and after Domino makes an advance on him. Though nothing ever goes very far between the two, he becomes attached to the pair and later has to face a new reality as he starts to forget about his own life.

Dakota Johnson Likes To Be Ominous 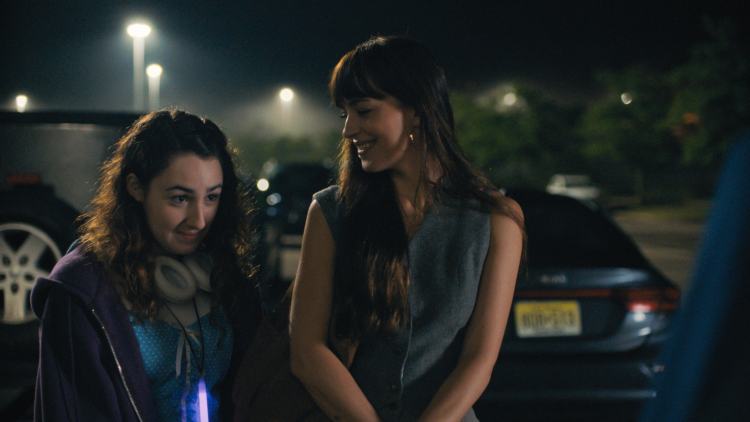 I'm shocking myself in saying that the one main criticism I have for this film comes from Dakota Johnson's performance. I know. Listen, I can still revere her for causing the crack that broke Ellen DeGeneres' empire, but her portrayal of Domino (another obnoxious name) just wasn't cutting it.

I can't tell if I should be blaming the writing and direction or simply her performance, but either way, Domino was an odd fixture of the film. Listen, it's obvious what she sees in Andrew, but I genuinely don't know what he sees in her.

She's extremely ominous and withholding; by the time the film ends, we really don't know much about her aside from the fact that she has a daughter, is engaged, lives in her fiancé's parents' house, and likes Andrew. That's literally it; after an hour and 47 minutes, that's what I know about her. I don't know, I can't adequately explain her aura, but Domino definitely has cursed vibes.

Also, while we're here, what does Domino see in her fiancé, Joseph (Raúl Castillo)? She claims that he's one of her soulmates in life, but there aren't any facts to back that up coming from the angle of the audience. We've only seen this dude be a complete jerk so far, and until the very end of the film, there's zero redeeming quality to him at all. To me, it just seemed like there was no reason for her to be with him; their relationship wasn't convincing enough to warrant her not calling off the engagement.

"Mom, I'm Sorry You Got Slugged" 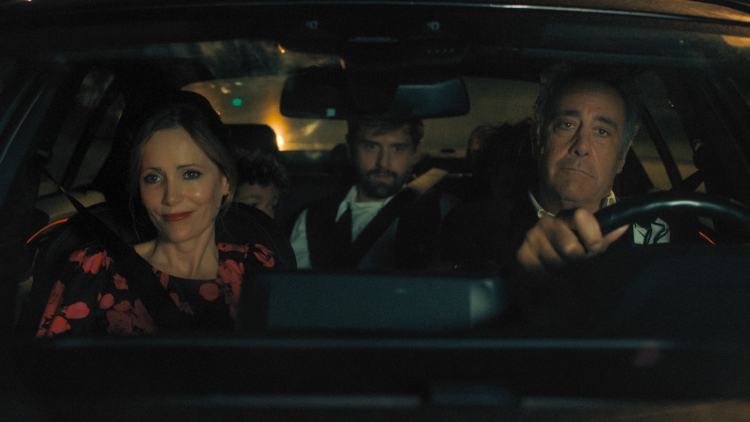 Now, I can't forget to mention Andrew's (mostly) sweet family, helmed by his bipolar mother, portrayed by Leslie Mann, along with his younger brother, David, and step-dad, Greg (Brad Garrett). The beginning of the film solidifies the special nature of his relationship with his mother, cutting back to his childhood in a moment where he was completely heartbroken over a crush he had on a much older woman. By the end of the film, his mother comforts him in the exact same way as she had back then.

Andrew doesn't have the best relationship with Greg—well, except for when his mother accidentally gets "slugged" in the face at a bar mitzvah, and Greg turns around and slugs the guy who slugged her (I forgot how much I love the word, "slugged").

Andrew is very close with (and shares a bedroom with) David, who's about ten years younger than him and going through those classic teenage growing pains. Their relationship is gentle and always supportive and the last scene of them together actually brought me to tears (unsurprisingly, because I cry at everything, but still). When you watch it, you'll know.

Despite Cha Cha Real Smooth being a fairly awful name for a movie, it really pulled itself out of the pre-conceived gutter that I had it lying in. Honestly, it might be one of the most natural-feeling films I've seen in a long time; it's kind of like when a teacher writes down "a pleasure to have in class" on a kid's report card.

So, Cooper Raiff, this movie was an absolute pleasure.