Travel Back To The Cretaceous Period With AppleTV+'s 'Prehistoric Planet' 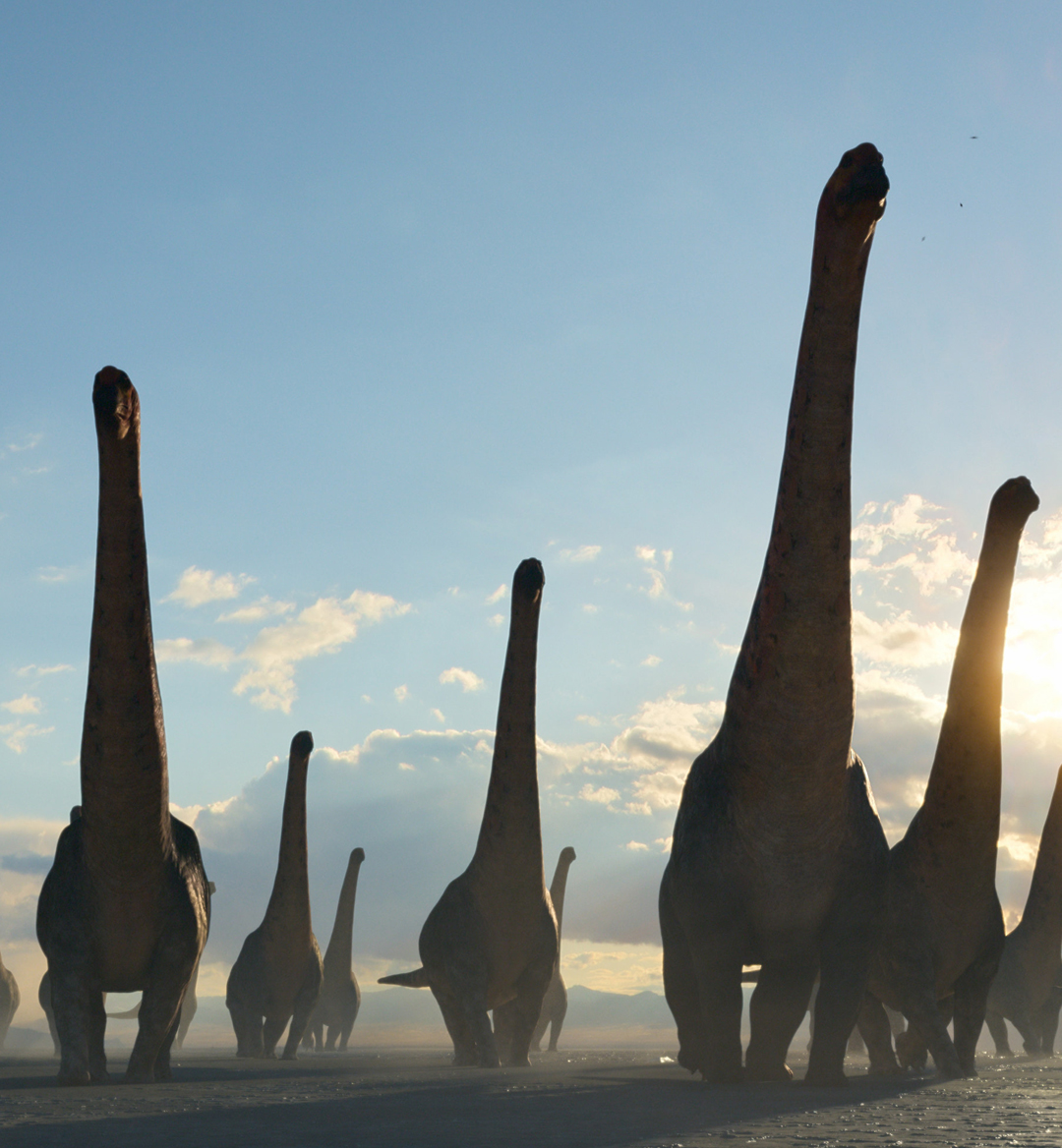 We've all wondered what life must have truly been like when Dinosaurs roamed the Earth. Various species and lifeforms dominated the ecosystem, with the Cretaceous period featuring some of the deadliest creatures in this planet's history.

Everyone knows the heavy hitters when it comes to dinosaurs: Tyrannosaurus Rex, Triceratops, Velicoraptors, etc. AppleTV+'s new five-part docuseries, Prehistoric Planet, sheds light on some of the lesser known Dinosaurs and brings them to life with stunningly beautiful CGI.

"Prehistoric Planet presents little-known and surprising facts of dinosaur life set against the backdrop of the environments of Cretaceous times, including coasts, deserts, freshwater, ice worlds, and forests. Travel back 66 million years to when majestic dinosaurs and extraordinary creatures roamed the lands, seas, and skies."

Apple does a good job summarizing what the docuseries is about, but if you want a more concise description: Prehistoric Planet is Planet Earth with dinosaurs.

Speaking as someone that can throw on Planet Earth whenever and lose myself in it, I was super excited to check out Prehistoric Planet. The docuseries was produced by Jon Favreau and the creators of Planet Earth, not to mention it is narrated by the one and only David Attenborough, so needless to say my expectations for it were high.

Happy to report that my expectations were met and, in many ways, surpassed.

I don't need to say too much about the narration stylings of Sir Attenborough, but his ability to keep the viewer engrossed in a scene is second to none. Even though the events of Prehistoric Planet are fictional, he manages to make them all feel incredibly authentic.

The series opens with a T-Rex and his newborns swimming in the water off the coast of a distant island. He leads his kids on a trek through deep water as they make their way back to land. Suddenly, we hone in on a massive sea creature, a Mosasaur, which, as Attenborough puts it, dwarfs even the T-Rex in size. It is the largest predator on the planet, and it has only one goal: To eat some of these baby T-Rexes.

Tension continues to build and build with the score from Hans Zimmer swelling, and before we know it, one of the babies is dragged beneath the surface, never to be seen again. Even though it's a fictionalized encounter, it helps hammer home just how cruel and unforgiving this world was.

You might be looking at videos of CGI dinosaurs, but your heart will most definitely break. Whether it's a baby T-Rex being eaten by a Mosasaur or a bunch of baby turtles being eaten by other predators, every one of these encounters feels pretty damn real. 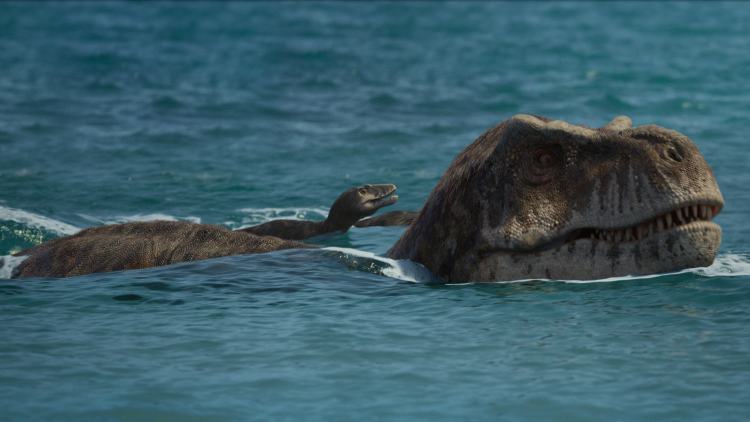 One of the things that made Planet Earth so engaging was the sweeping shots of the planet's landscapes. It was hard to believe that this was the world we all shared and documentaries like that helped you appreciate it. Prehistoric Planet succeeds similarly with stunning images of deserts, forests, oceans, the arctic, and swampy marshes.

The CGI—developed by the Moving Picture Company, which also worked on award-winning films like 1917, The Jungle Book, and Life of Pi—imagines what these dinosaurs looked like in incredible detail. Working with paleozoologists, the production team recreated these dinosaurs down to the smallest scale and the tiniest feather. 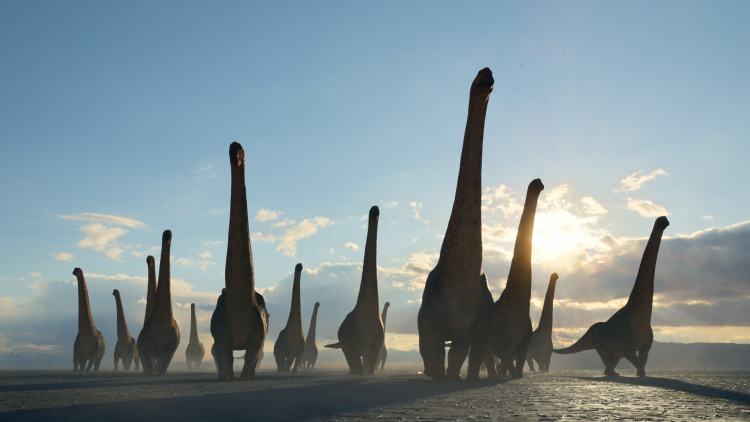 Rival dinosaurs clash over food, territory, and the right to mate. If it weren't for the fact that these creatures are long extinct, it'd be easy to forget that you were watching something that didn't actually happen.

In a sequence from one of the later episodes, we watch three Nanuqsaurusus fight with a herd of Pachyrhinosaurusus in the cold Arctic snow. It's a scene that likely occurred an endless amount of times in real life, but here, it plays out like a Hollywood car chase. The Nanusarusus pursue their prey with incredible intensity, with the Pachyrhinosaurusus forming a defensive circle, awaiting the oncoming battle.

Elsewhere, a herd of male Dreadnoughtusus traverses an arid desert, marching to an area where they hope to win the approval of their female counterparts. Towering over many of their dinosaur counterparts, watching two of these monsters go toe to toe is akin to a fight between heavyweight boxers or Roman gladiators.

Two Dreadnoughtus enter, and one leaves. 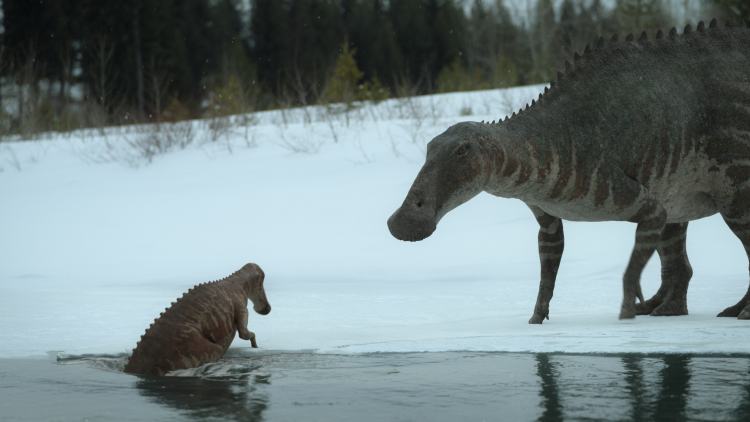 While the epic clashes are visually thrilling, watching these dinosaurs just go about their daily lives is often the most fascinating part of Prehistoric Planet.

A mother Dromaeosaur and her newborn wade through icy rivers, nearly losing the young one along the way. Scenes like this were often the best part of Planet Earth as well. We find ourselves rooting for these dinosaurs, and watching them stumble and fall leaves a genuine impact and tugs at our heartstrings.

In Prehistoric Planet, we are forced to use our imaginations to picture this. Still, thanks to the combination of computer graphics and the Earth's natural beauty, the picture is painted for us. 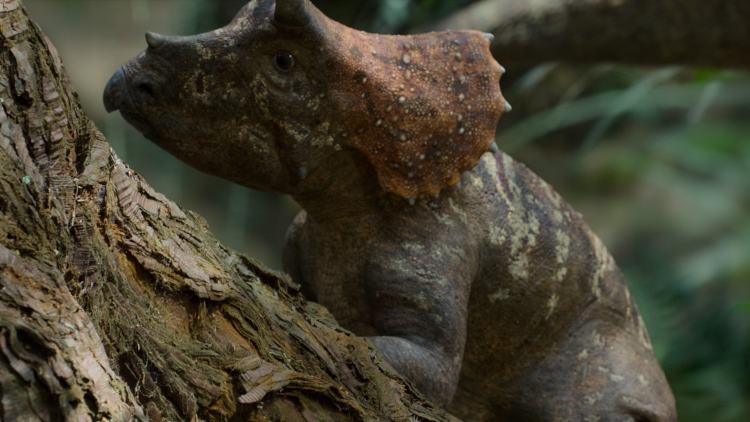 Fans of documentaries and series like Planet Earth will have plenty to love about Prehistoric Planet. It has everything that made that series such a joy to watch and sprinkles in dinosaurs, and if that's your thing then you're guaranteed to enjoy this series.

Prehistoric Planet drops its first episode on AppleTV+ on May 23rd.