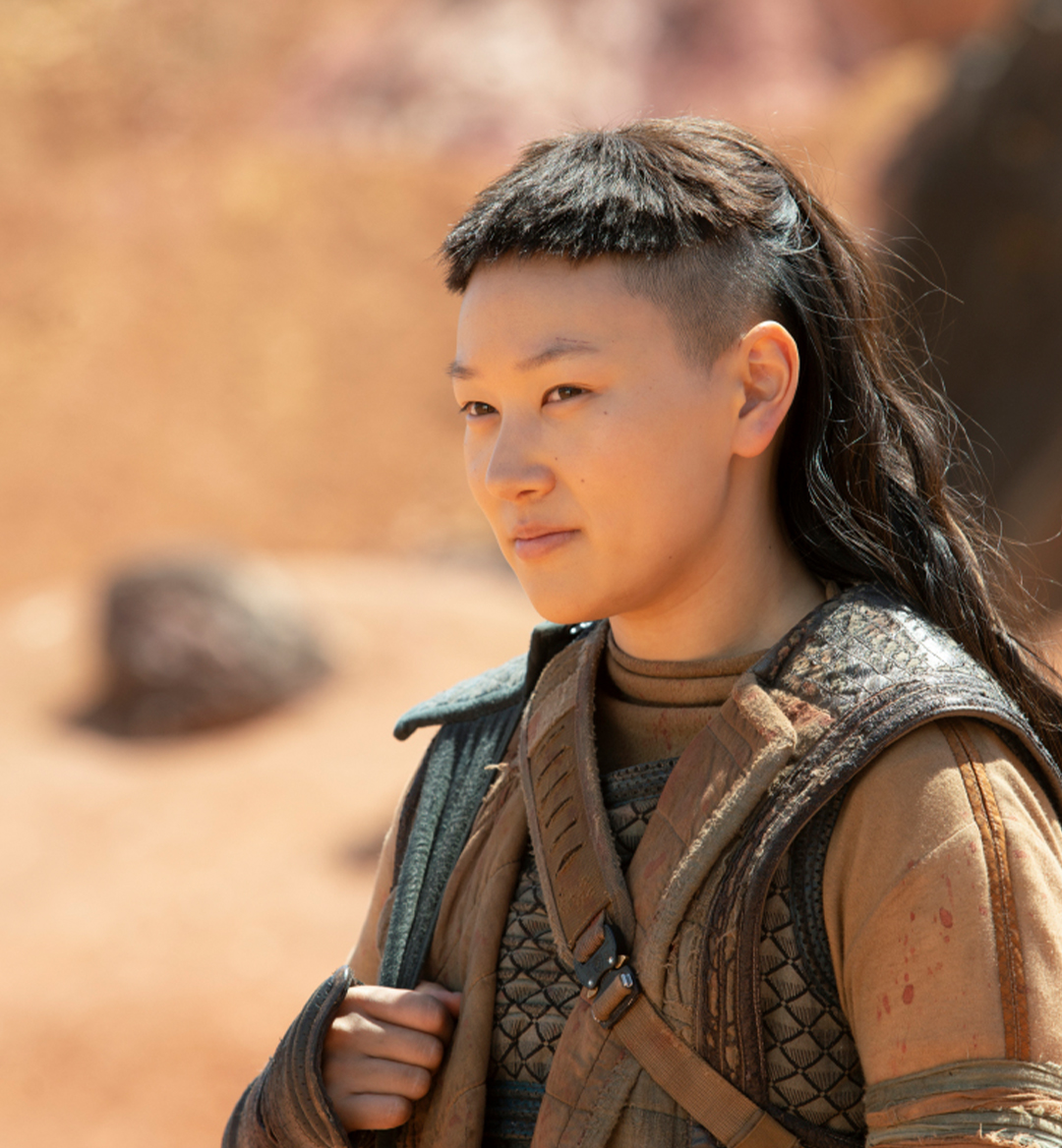 We had a nice break from the Kwan storyline in the last episode of Halo, but that break could only last so long, as we were given an entire episode revolving around her this time around.

I've written before about how Kwan's story has felt a bit forced into the rest of the main plot of the series involving Master Chief, as the two stories are basically operating as if they're separate shows. At this point in the series with only two episodes to go, we're just not invested enough in Kwan's plot to have it warrant an entire episode. Alas, here we are, though the last 10 minutes made up for some lost time in the beginning. 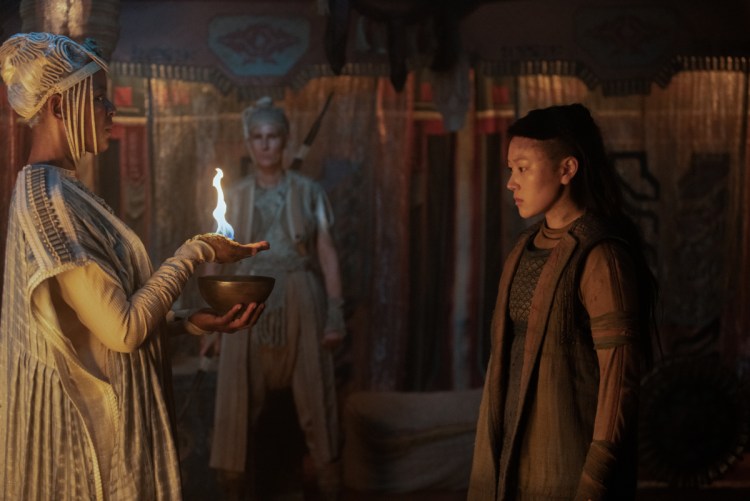 A few episodes ago, Kwan's aunt told her about her father's pilgrimage to the Madrigal desert, where he encountered and joined a group of mysterious people. Pretty vague, right? Well, upon his arrival back home following this, he was a completely changed man, though for the worse. After hearing this, Kwan sought to find the possibly-fictitious people in the desert who caused her father to change. Given the lack of details about the group's whereabouts, it seems like it would be pretty tough to locate them. Wrong.

After driving into what looked like the Dust Bowl circa the 1930s, she happened upon a group of people in silhouette and decided to get out of her car to check out the scene (always a good idea). A few seconds later, she's kidnapped and brought back to the group's campsite.

She quickly realizes that these people knew her father and actually weren't awful people (you know, the ones who usually carry out kidnappings). They're a bit sketchy, though, and the main woman of the group, Desiderata (Josette Simon), pulls an Oprah-walking-on-hot-coals moment and lights a flame in her hand which she turns into water, which Kwan is told to drink.

She's immediately brought into an altered state of mind, where she encounters her deceased relatives as well as Master Chief, whom she ends up fighting as part of a weird test. Try as she might, she's basically attacking a brick wall when it comes to approaching him. She uses her fists, a knife, a gun, and even a large rock to defeat him, but each time, he kills her, bringing her back to the start and repeating the process once again.

Though she wasn't ever able to defeat Chief, she was able to face her father, as Chief gave her a hand and led her to him. There, she was able to ask him what she should do with her life as Vinsher is now in control of the planet. To that end, he tells her that she is ready to protect Madrigal and clues her in on a secret portal in the desert (though she's not quite ready to know the full details of it just yet).

Upon being brought back to the present day, Kwan realizes that her father actually wasn't the terrible person that her aunt was making him out to be. What he actually encountered in the desert was a profoundly introspective experience, as she has now gone through the same thing herself.

Kwan and Soren: I Just Tased You, but Let's Be Friends 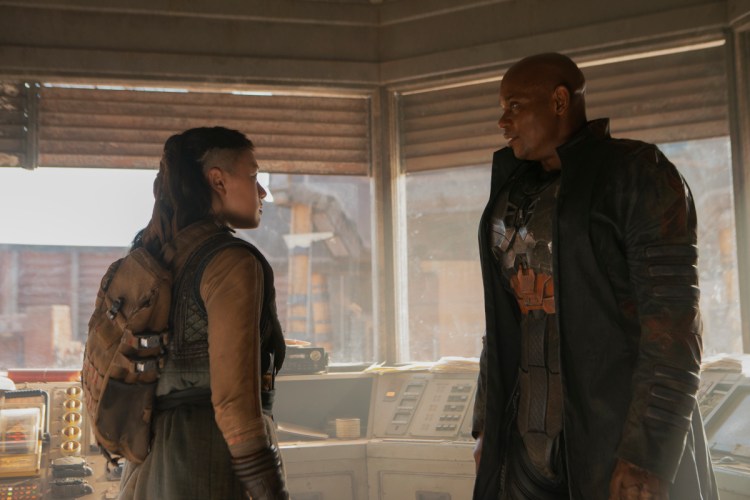 Though Soren was somehow able to leave Madrigal following his tasing by Kwan, back on the Rubble, he finds out that her bounty has been tripled by Vinsher, meaning that she's still alive. After a bit of convincing by his wife to do the right thing and rescue her, Soren begrudgingly heads back to Madrigal to locate Kwan.

It turns out that it wasn't as hard as he thought, as Soren basically pops out of nowhere and approaches her. While Kwan is at first skeptical of his intentions (she did just tase him two episodes ago), he agrees to keep her safe and help her off the planet, as she's being stalked by Vinsher and his operatives.

However, right at that moment, Vinsher's team arrives on the scene and begins to look for Kwan, forcing her and Soren to come up with a quick plan: to manually turn on a valve that would pump hydrogen gas into the area where Vinsher's squad is at. Once the gas is pumped in, all they would have to do is shoot a bullet into the holding tank, which would cause a major explosion and wipe them out. The only catch? Soren and Kwan would have to make it to the fallout shelter before the blast is able to reach (and kill) them.

What then ensued was a mostly long-range battle between Soren and Vinsher's gang, as Kwan had to traverse through the underground to activate the hydrogen valve. Soren was able to hold them off for just long enough, allowing Kwan to turn on the valve, though they cornered and shot him right when it was time to unleash the holding tank. Coming out from the underground tunnel, Kwan found Chief's old rifle from the first episode and uses it to shoot the holding tank, which activates the hydrogen. She runs to the shelter with Soren just in time for the entire place to go up in flames. Ahh, sweet victory.

I'll be honest, when I realized this episode was only going to be following Kwan's plot, I was pretty bummed—we've been closely tracking Master Chief's story in every episode that it felt kind of absurd to derail that plot for an entire 50 minutes.

While I feel that the better part of this episode could've been cut down to about five minutes or an email, the last 10 minutes really got to the core of what this show does well: complicated relationships and action.

Also, I just need to add: how did Soren not die from that gunshot wound? After Vinsher and his team are killed, Soren just takes off in his ship and heads back to the Rubble as if nothing happened. I kept expecting him to keel over, but it seemed like he shook off that gunshot wound pretty well.

While this episode redeemed itself at the very end, here's to hoping that next week's episode puts the spotlight back on Chief.

Spooky Season is Here: The 11 Best Haunted Houses in the US

The 25 Best Fall Movies for Some Major Cozy Vibes

Meet Chef Reactions: The Culinary Artist Conquering TikTok, Once Recipe at a Time