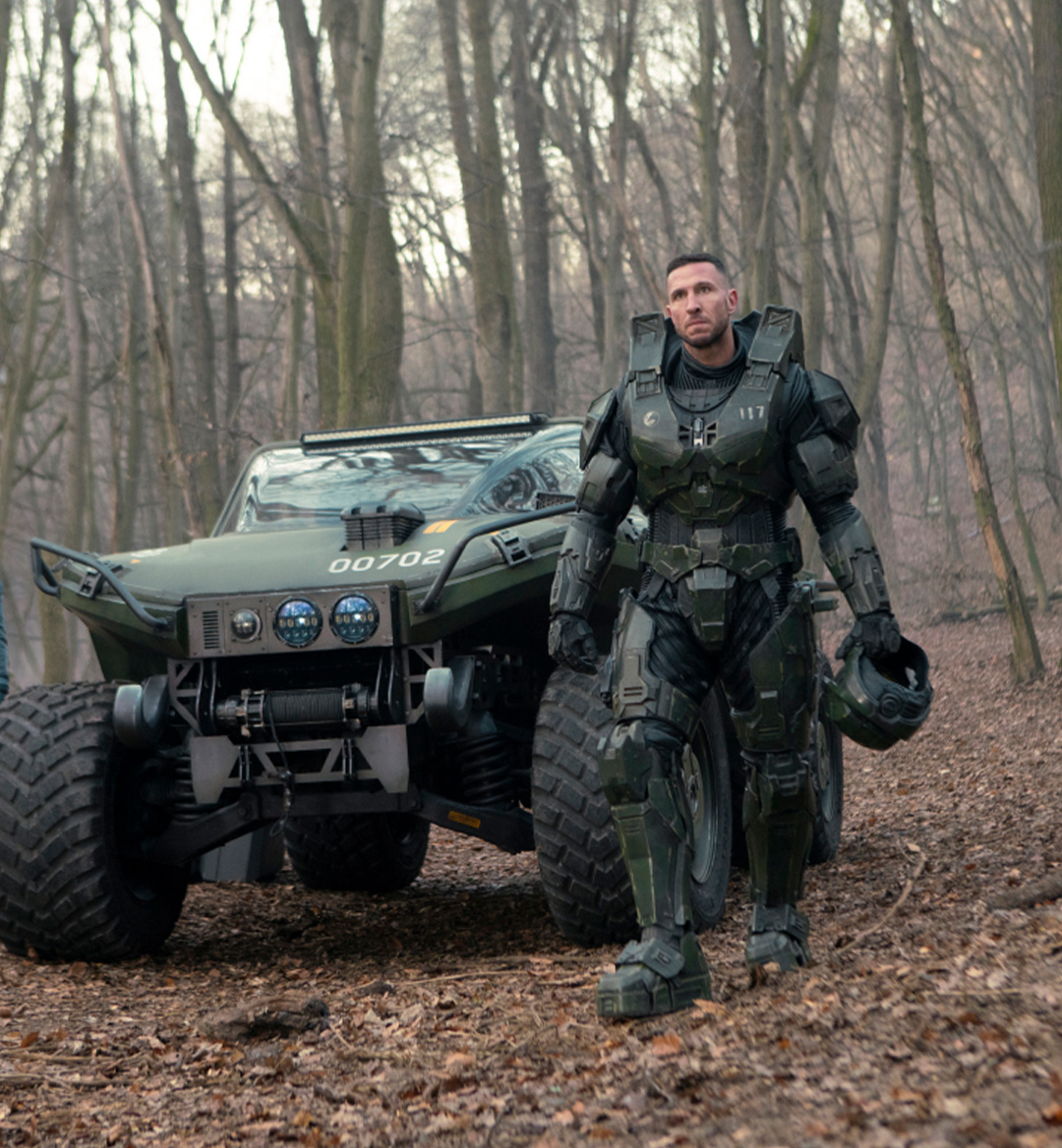 Episode 3 of Paramount+'s Halo brought back a beloved member of the Halo squad: Cortana. While it was nice to get reacquainted with her, this episode was significantly lacking in Cortana (*sigh*).

In Episode 4, we're thrown into another flashback, but we go even further back past Master Chief's young adult life as a Spartan. As a child, we watch as he trains with the other pre-Spartans, though he tries to run away. He's then approached by Dr. Catherine Halsey, who reminds him of why he needs to stay.

We cut over to Madrigal, where Kwan Ha and Soren are riding around, looking for Vinsher's ships. Soren reveals that after leaving the Spartan program, it was as if his mind was completely wiped, with small bits of information coming through as time passed. For example, it took him quite a while to remember that his father had passed—and that he was the one who killed him.

On Reach at the UNSC base, Kai—after having seen Chief remove the emotional-suppressing device from his back—is asking around if anyone has seen him (though he's now off the base and headed to Eridanus II). However, as the camera pans to the back of her, we can see an empty spot where she has removed her device, as well. Looks like we've got a little trend catching on here, right? 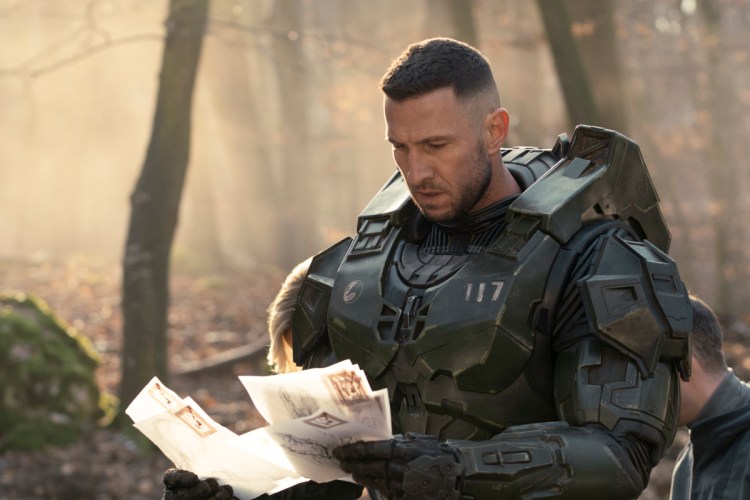 Chief, Dr. Halsey, and her assistant make it to Eradinus II; apparently, the colony was led by his parents, who were widely considered heroes for keeping the colony afloat. Immediately upon arrival, Chief is able to locate the briefcase that he buried years ago. Inside, he doesn't find the keystone but instead sees all of the drawings he made as a child about the keystone.

While John obsesses over the drawings, Dr. Halsey more wants to get to the point and find the physical object. However, the drawings send him to a quick flashback, which spurs him to head up to his old house and check things out.

Back on Madrigal, Kwan and Soren head to where Vinsher is hanging out. Just as they're leaving the scene, Kwan and Soren pull up and get to experience his oppressive ruling up close. While walking around the crowded streets, Kwan runs into an old friend, Attu, who clearly doesn't want to be associated with her. However, he tells her to come to her father's memorial, which is being held later that night. Right as he's leaving, Kwan sees a broadcast with a "Wanted" sign over an image of her, along with an offer of a reward for her finding.

Later at the memorial, Kwan isn't too happy with the turnout, as her father fought very hard to keep control of Madrigal. She talks to one of her old friends, who reveals the violence that has been occurring since she left. Apparently, everyone is frightened of the government and just wants protection from them; basically, the revolution is over. Because of this, she ends up making quite the scene and calls her friend a traitor, which catches the attention of everyone gathered around—not the best move when you're wanted by the government.

Right at that moment, a horde of government troops comes storming in and starts to attack the people gathered at the memorial. It's a scene of chaos immediately, and it's all the doing of Kwan. 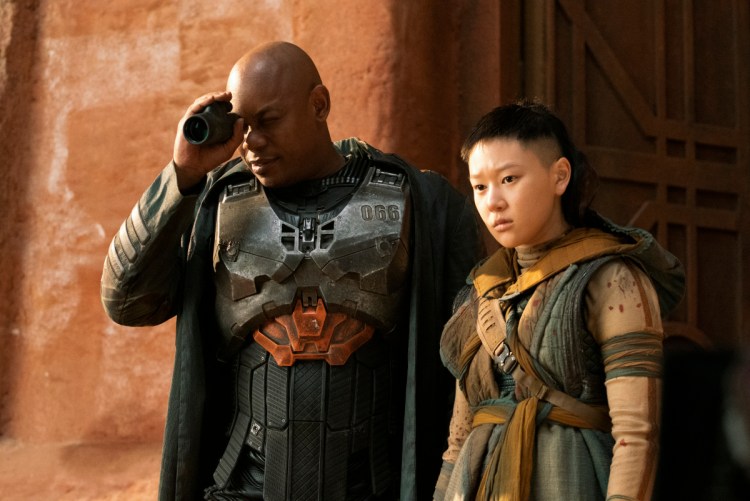 At the UNSC base, Dr. Miranda Keyes hosts a bit of an impromptu meeting with some of the Spartans, where she interrogates them as to why Chief is so special. They don't really have any decent answers, as one simply says it's because "he's the Master Chief." Afterward, Keyes tests out each Spartan with the keystone to see if they're able to have the same powerful interaction that Chief can. Kai comes in to do her test, and after taking off her helmet, Keyes sees that she has dyed part of her hair red with her own blood (Pinterest hack?). Though nothing happens when she touches the keystone, she gives a lengthy speech to Keyes about how she should stop treating the Spartans like machines, as they have much more to give to the world.

At Chief's old house, the group wanders around, looking for hints of, well, anything. Chief then asks Cortana to assemble a rendering of what his old house looked like, which she shows him on his heads-up display. Though she has trouble recreating his room due to the damage, he's able to get himself into a vision that reveals more about the house. He watches on as his young self draws something, showing a hole in the ground that leads to an underground cave that holds the keystone, which his younger self touches. However, when he flashes to his mother, he sees Dr. Halsey as if she were his mother. That quickly snaps him out of the vision, after which he promptly leaves the house.

Outside of the house, Dr. Halsey expresses her concerns to Chief about the fact that he's having visions outside of the keystone. He then admits that he saw her in his vision, though she dismisses ever being at his home, claiming that visions get muddled over the years.

Back at the UNSC base, we finally reach the moment I've been waiting for: the reveal of our old buddy, The Needler, which Kai appropriately fangirls over. After she says the word for "Needler" in the Covenant language, it sparks Keyes' imagination, prompting her to ask the other Spartans about the other words they know from the language.

On Madrigal, we cut over to Vinsher, where we get more of a close-up view of him, as he's smoking a cigar and hanging in a remote cave pool. In speaking with Franco, an assassin, he brings up Kwan specifically, whom he believes will be trouble for them. Right as he's saying this, Kwan and Soren are approached by men with knives who attempt to kill them for the reward, though her aunt swoops in and calls it off. Vinsher then instructs Franco to "take care" of her.

After inputting the new Covenant words into the system, Keyes has a chat with the Spartans, who tell her a bit about their past training. For example, they were all given pets and then given a task to complete. The side that won the task got to keep their pets, but the other side was then forced to eliminate them—a task that came as a major shock to Keyes. 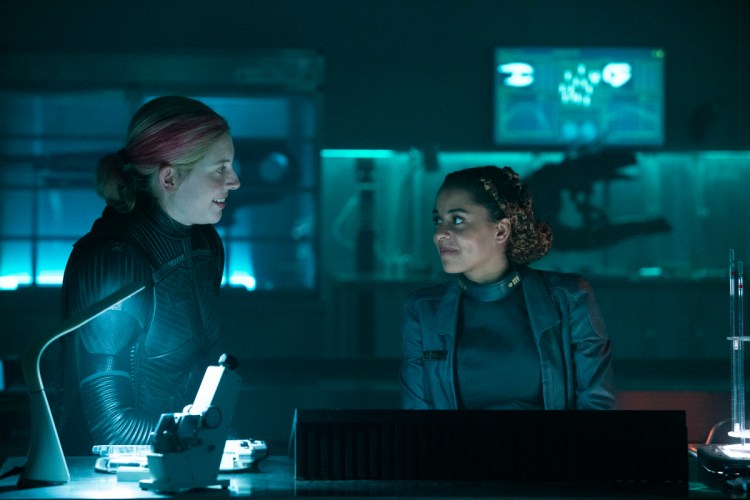 On Madrigal, Soren's ship was completely scrapped, leaving him without a ride back to the Rubble. Instead, he'll have to take a transport ship later that night to go back home. The only catch? The transport ships are located 200 miles from his current location. He threatens a local man with his gun to take his motorcycle as Kwan is explaining the overall situation to her aunt. Apparently, her father spent all of the money on the revolution, leaving her aunt and family penniless.

Kwan basically cannot be talked out of wanting to pick up where her father left off, even though her aunt advises against it. Her aunt then reveals that her father fought for a lie, explaining that he joined a desert group called The Mystics. Upon returning from the desert, he was a completely different person, insisting that it was his responsibility to free Madrigal—his true purpose in life.

All of a sudden, there's a thud at the door, and as her aunt swings it open, Franco has just taken out the guards outside and then immediately knocks out her aunt. As Franco approaches Kwan, her aunt tries to save her, though Franco kills her on the spot. Just then, Soren comes through the door and shoots her, sending her out the window—though she survives.

They flee the scene, but as they're attempting to get on the motorcycle, shots are fired, but Soren is able to fight back. They're then engaged in a fairly low-speed motorcycle chase.

Back at the UNSC base, we've got a little Halo name drop going as Keyes and Kai look back at the footage from Chief's first touch of the keystone. The ring around the keystone resembles a ring, also known as a Halo. Aww. Keyes then asks Kai if they can keep this discovery between the two of them, and she immediately agrees.

Keyes then lets Kai in on a little secret about Dr. Halsey: when her Spartans start behaving in "unexpected ways" (like humans), it makes her uncomfortable, as their actions are controlled by emotions and passions.

We finally cut back to Chief's home planet, where he's able to locate the hole in the ground from his childhood drawing. He jumps in, finding just what he had seen in his visions: the keystone.

Okay, so this episode was definitely better than the first two, but the third episode is still the best of the bunch. While this one had a bit more action than the others, the action was always short-lived—there was no epic, main scene like we got in the first one.

Overall, it was a bit slow-moving, mostly with the story of Kwan and Soren, as I was more interested in Chief finding the second keystone. The scenes between Kai and Dr. Reyes were surprisingly interesting, as it felt like the two made an unlikely bond. That'll be quite the relationship to explore, as Reyes wanted to keep information between the two of them, which is probably frowned upon in the UNSC.

Kai is actually turning into one of the most intriguing characters, as she removed the emotion-suppressing device from her back. Hopefully, we'll see a bit more of her in the coming episodes, as the story with Kwan and Soren seems a bit forced as no one in the city really cares about going against Vinsher.