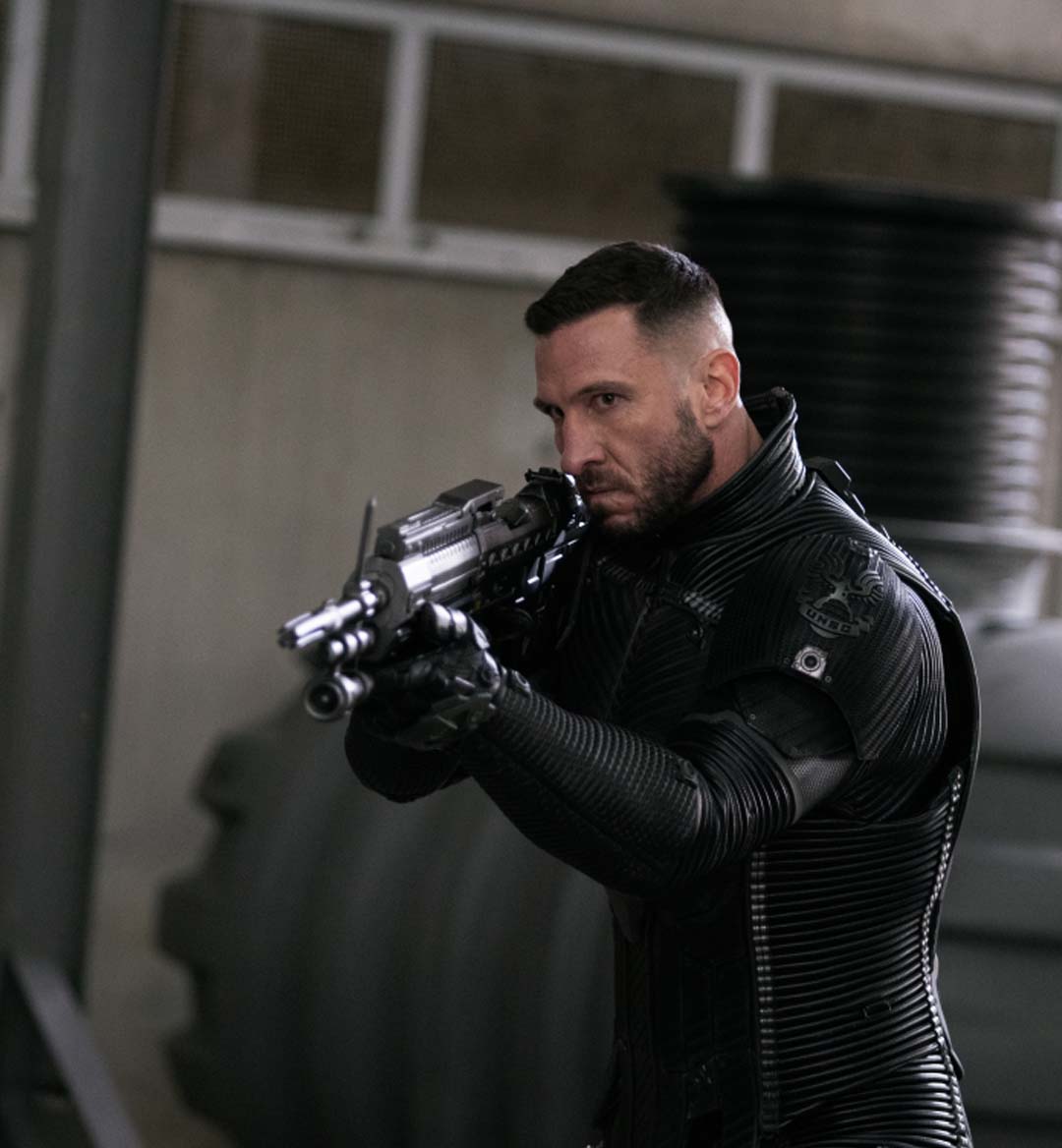 Don't even make me talk about last week's episode of Halo again. And surprise surprise, there was zero mention of Kwan in episode eight—someone make this make sense.

Thankfully, we were reunited with Master Chief this time around, and having just come off that major a-ha moment in the episode prior with Makee, Chief has some figuring out to do.

Aliens in Love and Angry Scientists? 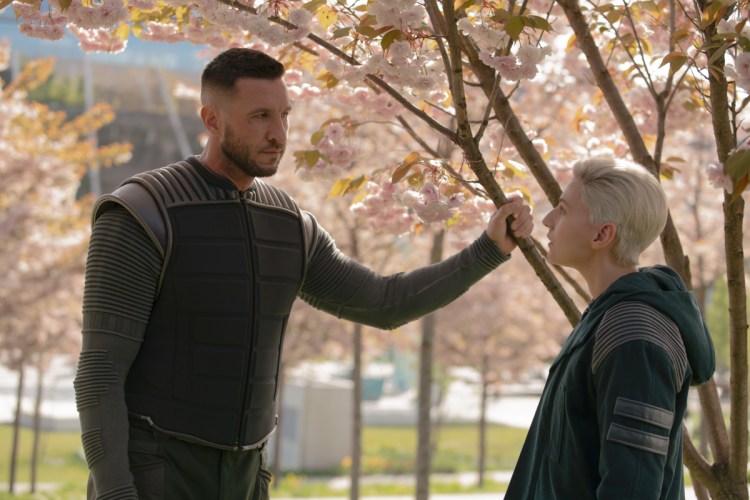 In episode six, Chief and Makee shared an intense experience after he touched the keystone, except this time, he took her advice and accepted the keystone, which brought both of them into an open meadow of calm and clarity. That moment seemed to change everything for the two, creating a bond that has only grown stronger since. I don't know if Halo is pulling a Star Wars and they're actually twins who were separated at birth, but it kind of seems like it. Well, except for the fact that they promptly sleep together afterward.

And what makes that even worse? Cortana watches on as this happens, bummed out because she has feelings for him. Well, I think she does.

Right after this, Makee gets out of bed and decides now would be a great time to casually rip out the tip of her finger in the bathroom. In the past, we've seen a blue, pointy thing pop out of her finger, and though I'm not completely aware of its full power, I'm pretty sure it's murdered quite a few people in the past.

For a much different reason, Dr. Halsey sets her sights on Makee, but for her, it's in an attempt to have her sway Chief to run away with her and the keystone. Halsey, being the narcissist that she is, wants full control of the keystone in order to observe it on her own terms and harness its power. Though Dr. Halsey is still being exiled from the UNSC base, she's using Cortana to tap into what's going on at the base. With the unlimited control of Cortana, she brings a holographic version of herself into Makee's room to sway her, though it's no use; Makee is dedicated to Chief now.

Cortana: Our Lord, Our Savior 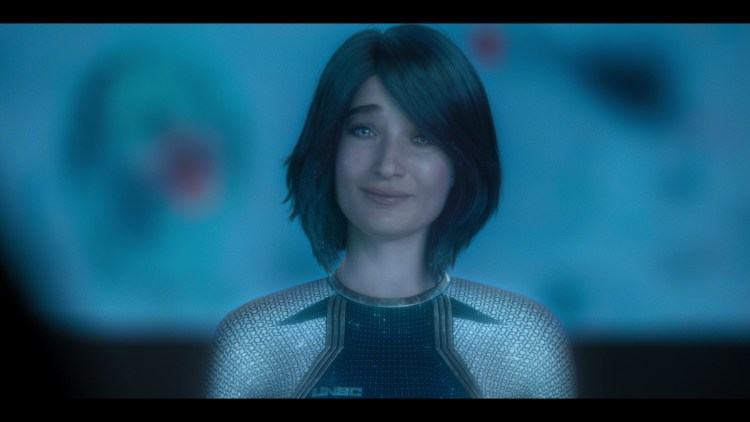 As Makee isn't giving in to Dr. Halsey's request, Halsey goes rogue and sends out a direct order only to three Spartans (Kai, Vannak, and Riz) to locate Chief, Makee, and the keystone and to bring all three back to her ship, where they'll take off for who knows where. This is considered the "Zed Protocol," which is put in place when the senior leadership of the UNSC isn't making the right decisions (which isn't true). Honestly, I don't know why they're even following her instructions given that Halsey has been fired.

Well, all except one decide to follow her protocol; Kai—as she has removed the chip from her back—doesn't feel right about these instructions, which she verbalizes to the others. Hearing this, Halsey secretly orders the other two to kill her, yet instead, they knock her out and tie her up against a pole to prevent any further action.

Knowing that Chief won't go along with this plan, Halsey instructs Cortana to disable him as she did once before, though she seems a bit skeptical of the whole thing.

Despite the fact that Dr. Halsey is technically Cortana's creator, she really serves to protect Chief, and it's no more evident than in this moment when she finally disobeys Dr. Halsey and clues Chief in as to what's actually going on. It's a bit hard to get her point across at first, as Chief tells Cortana to shut up and leave him alone (major teenager vibes), but when she yells for him to stop everything, he finally listens.

"Halsey initiated the Zed Protocol," Cortana says. "You're walking into a trap. Turn around and get out now."

Watching along from the monitors, Halsey notices that John and Makee have stopped walking, and it's at that moment that she realizes Cortana has betrayed her. To be fair, this shouldn't come as much of a surprise to Halsey as she treated Cortana like total garbage for the majority of the series—this was a loooooong time coming.

Although he was warned, Chief ends up being attacked by the two Spartans and basically gets his butt majorly kicked. Just when it seems like they're going to fully kill him, Kai swoops in, having broken herself out from being cuffed to the pole. She doesn't help much, though, as things end up in a stalemate with basically everyone pausing and pointing a gun at one another.

In another room, Makee has been taken away to be with the higher-ups at UNSC, attempting to get them to take the threat to the Chief's life seriously. They decide not to listen to her and instead proceed to tase her repeatedly, which eventually drives her into a rage great enough to reach over and touch the keystone. As we've seen before, this sends a massive shockwave through the building, and Chief is thrown back into the calm meadow from before. End scene.

Once again, the last 15 minutes of this episode is when this series shows what it does best: action and Cortana. How many times do I have to say it? ACTION AND CORTANA.

We need more of the back-and-forth relationship between Chief and Cortana—this is a genuinely intriguing relationship that's beyond worth diving into, yet I feel that it's like pulling teeth to get the Halo creators to give us more of this. In this episode, Cortana tells Halsey that she isn't capable of feeling emotion, yet it's abundantly clear that she does—especially when she goes to save Chief.

Now, we've only got one episode left of Halo and I actually don't know how they're going to effectively wrap this up. Of course, we know that we have a second season currently in the works so nothing needs to be completely concluded, but there are a few issues that could be resolved.

For one, what are they going to do with Makee at this point? Dr. Keyes just found out that it was her voice speaking the Covenant language, and at the end of the episode, we see Makee being violently tased on the floor. Are they going to kill her? Throw her in Halo-jail? I mean, I still don't like Makee, but this is pretty rough.

On top of that, what about Kai? Those other Spartans really showed no mercy with her; they even chained her to a pole while she was unconscious. She's either going to have to put them in their place or they'll just come right back and finish her off. Kai has become one of the most interesting characters in this series: do NOT kill her off.

As for the Master Chief-Makee-Cortana-Halsey love-hate quadrangle? This one could go in just about any direction, though I'd hope that Chief and Cortana find a better understanding of their relationship with each other. I worry that the UNSC will go ahead and kill Makee simply because they feel that they can't trust her, and for Halsey, I bet there's going to be some sort of showdown either between her and Cortana or her and Chief. Maybe this time around Cortana won't stop him from attacking her. With this show, anything is up for grabs—after all, we did just see a woman dismember her own finger.