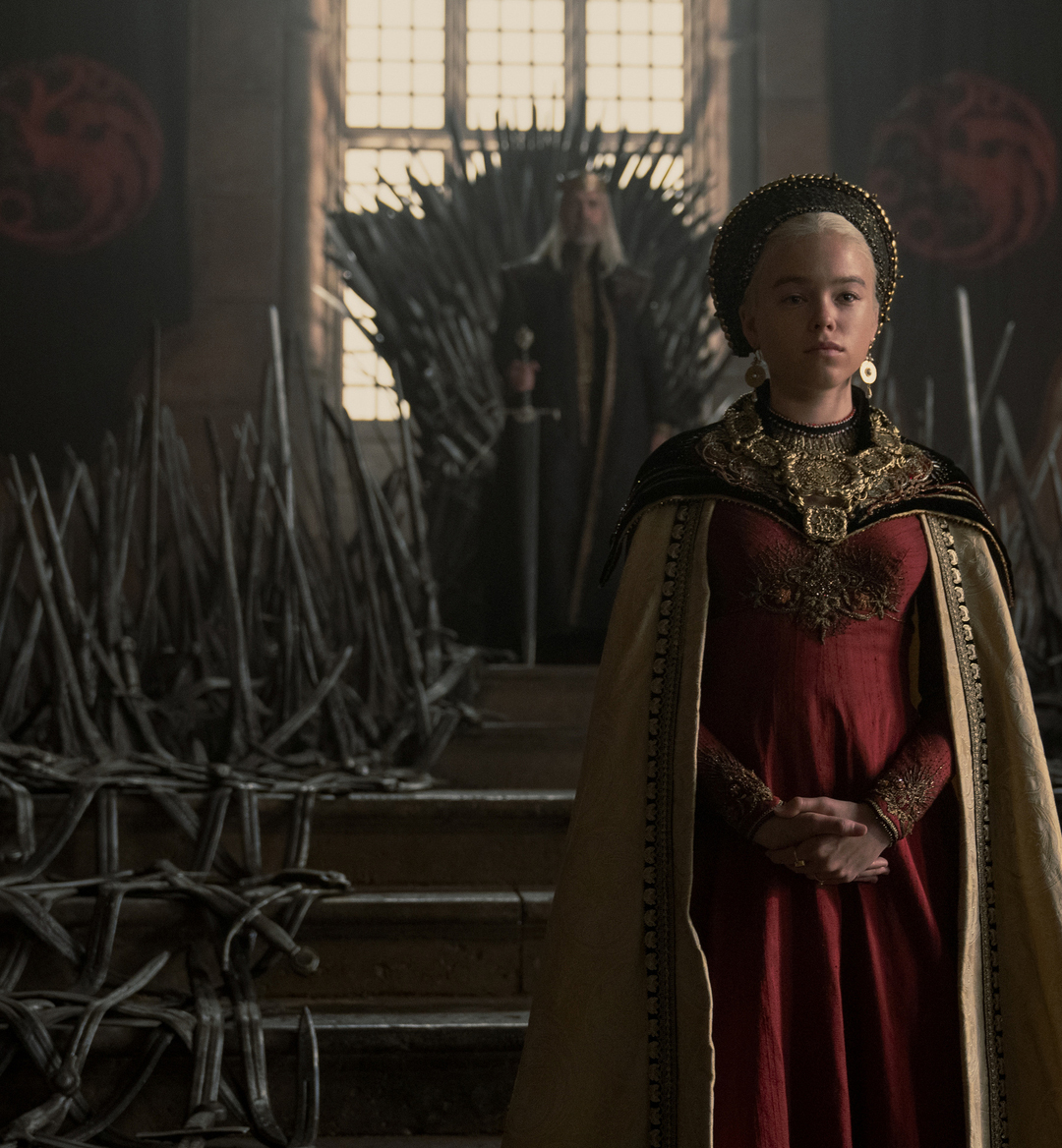 Game of Thrones' newest power struggle has everything: History lessons, squabbling meetings, violent roundups of criminals, castrations, forced c-sections, a jousting tournament, and plenty of people with silver hair. Called House of the Dragon, it's located in Westeros, a continent obsessed with determining who sits on the Iron Throne, a very uncomfortable chair made of swords.

Given how Game of Thrones ended, fans were right to be a little wary of any new shows set in Westeros. It's hard to remember any show dominating the pop culture consensus as much as Thrones did and then dropping out of it almost overnight. While fan and critical reactions were overwhelmingly adverse to the ending, the show was still immensely popular, and HBO capitalized by greenlighting numerous spin-offs to Thrones.

Enter House of the Dragon. A prequel set hundreds of years before the events of Game of Thrones; the series follows the beginning of the end of House Targaryen, the events leading up to and covering the Targaryen Civil War, known as the "Dance of the Dragons."

I Just Can't Wait to be King (Or Queen) 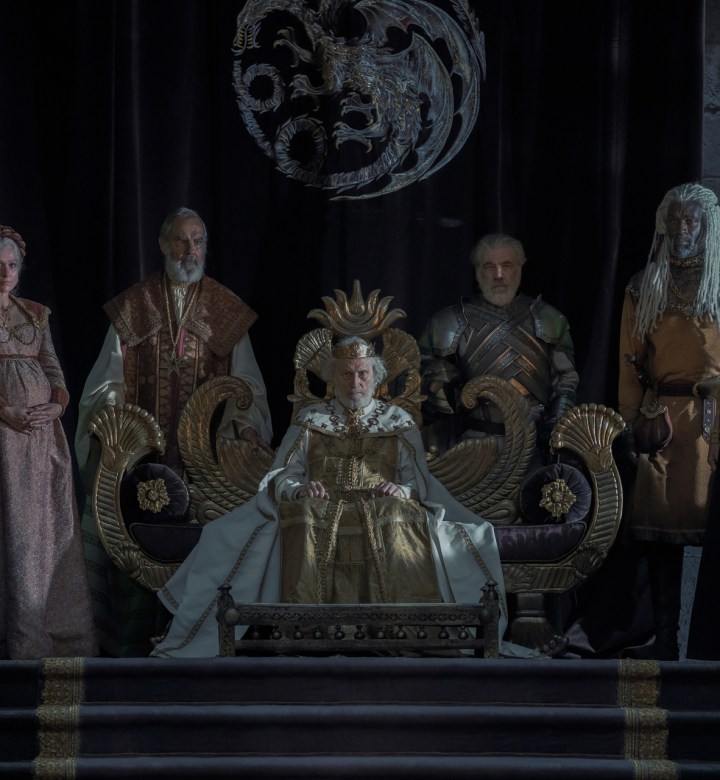 House of the Dragons begins with an exposition dump of the period, who some characters are, why they will be fighting, etc. After a hundred years of Targaryen rule, King Jaehaerys ruled over the seven kingdoms for 60 years, but he had no male heir to become King.

At a council of the various lords of Westeros, it was to be decided who would become the next ruler: Princess Rhaenys, the King's eldest descendent, or Viserys, the King's grandson. Given that Westeros was still patriarchal, Viserys was chosen to become the next King, despite Rhaenys being the older of the two. Rhaenys would then earn the unfortunate nickname of "The Queen Who Never Was."

As the series begins, the narration continues: "Jaehaerys knew the cold truth. The only thing that could tear down the House of the Dragon...was itself."

Nine years later, and 172 years before the birth of Daenerys Targaryen, we follow a dragon as it soars over King's Landing, a common sight in those days. It lands in the roost where the Targaryen dragons are kept, with Princess Rhaenyra riding the beast named Syrax, where she meets her friend Lady Alicent Hightower, daughter of the King's Hand Otto Hightower.

Rhaenyra goes to see her mother, Queen Aemma, who is pregnant with the King's next child, who he hopes to be a boy and his Heir. They have a conversation regarding roles and responsibilities, the conversation echoing one that Ned and Arya Stark would one day have. Rhaenyra would rather fight and rule than serve as a vessel for the King's heirs, as was tradition for women.

At a small council meeting, Lord Coryls Velaryon talks about how a new alliance in the Free Cities known as the Triarchy is growing in power, but the rest of the council pays him no mind. They also discuss that the King's brother, Daemon, had urged for a larger investment in the City Watch, which he received but gave no real updates on his progress.

They discuss the Heir's Tournament, meant to celebrate the birth of the new presumptive Heir to the Iron Throne. Viserys is overly excited for the child's birth, finally getting the son he's always longed for, to the neglect of Rhaenyra.

Rhaenyra finds her uncle Daemon sitting on the Iron Throne in the throne room. Daemon is the current Heir, and unless the Queen has a son, he will inherit the throne, to the dismay of many in the kingdom. He is not quite Joffrey Baratheon, but he's not a very nice guy either.

Viserys and Aemma talk about their future child, and he remains confident that they will be a boy, following a prophetic dream. Aemma tells him that regardless of the sex, this will be the last child she can birth. They've had one child die in infancy, two stillbirths, and two miscarriages, all within ten years. She apologizes for not delivering a male heir for him. 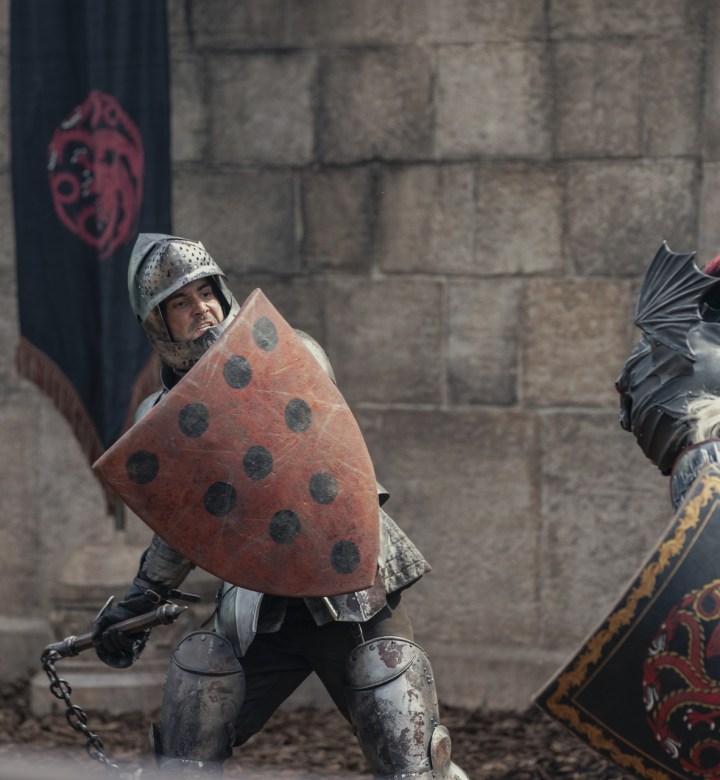 Daemon gives a speech to the members of the City Watch, right before they had out in a raid in the slums of King's Landing. They violently repress all crime in the area, killing any suspected criminals with Daemon acting as judge, jury, and executioner.

He is reprimanded by the King and the small council for the Watch's actions, most notably Otto Hightower. Daemon explains that the violence was necessary in order to provide peace and safety for all the lords coming to King's Landing for the Heir's tournament. Otto and Daemon argue, with Daemon cracking a joke about the death of Otto's wife. Viserys tells Daemon that any further violence like that will result in him being reprimanded.

Daemon and a woman named Mysaria have sex but it's clear that he is distracted by the events of the small council meeting. Something is troubling him, and Mysaria reminds him that despite his anxiety, he cannot be replaced by his brother.

At the Heir's tournament, Viserys thanks all those in attendance and announces that Aemma has gone into labor. Rhaenyra and Alicent gossip over the latest happenings at court, with the discussion spliced into the violence taking place in front of them. Rhaenyra asks about Ser Criston Cole, who is common-born but has managed to rise through the ranks to become a Knight of the Seven Kingdoms.

Daemon arrives at the tournament and chooses to fight Gwayne Hightower, Otto's son. Daemon and Otto lock eyes, and as the joust commences, Daemon takes a cheap shot on Gwayne by aiming for his horse's legs rather than for his shield. In a further act of disrespect towards Otto, Daemon asks for the favor of Alicent, who gives him a bouquet of roses to hang on his lance.

Viserys is told that Aemma is having a difficult birth and he rushes to her side. The Maesters tell him that the baby is breeched and that the lives of both Aemma and the child are in danger.

Meanwhile, the tournament continues with the fights becoming more violent and deadly. Rhaenys comments that since there hasn't been a war in decades, the knights fighting in the tournament have yet to taste actual battle, and their lords have sent them to fight, and possibly die, in a rather meaningless fashion.

It has become clear that both Aemma and the baby will not survive the birth but there is a chance to save the child. He is told that a technique has been taught, where the baby is surgically removed from the womb but it would likely kill the woman. As Criston Cole fights Daemon in the tournament, the c-section commences with Aemma being forcibly held down as the doctors cut her open to remove the child.

Daemon is knocked from his horse with his fight continuing on the ground against Cole. Cole wins the fight, with Daemon surrendering after a hard-fought duel. Contrasted against the dying Aemma, it recalls the conversation between the Queen and Rhaenyra, who told the Princess that childbirth is a woman's battlefield, where they go to fight and possibly die.

Tragically, both Aemma and the child, who was a boy, have died despite the doctors' best efforts. At the tournament, the High Lords are told of what has transpired and a new succession crisis has arisen. Aemma and their son, Baelon, are cremated by dragon's fire outside of King's Landing, with Rhaenyra uttering the famous Valyrian word, "Dracarys."

Immediately after, the small council holds a meeting with the King to discuss who will succeed him. The precedent and law have been set already, with Daemon being the Heir apparent as Viserys' brother. As Daemon listens in secret, Otto argues against this, seeing him as too violent and impulsive to rule properly. He suggests that Rhaenyra could be named the Heir but much of the council protests this, with Viserys saying that he would not be made to choose between his daughter and brother.

Cremations, Future Coronations, and Everything In Between 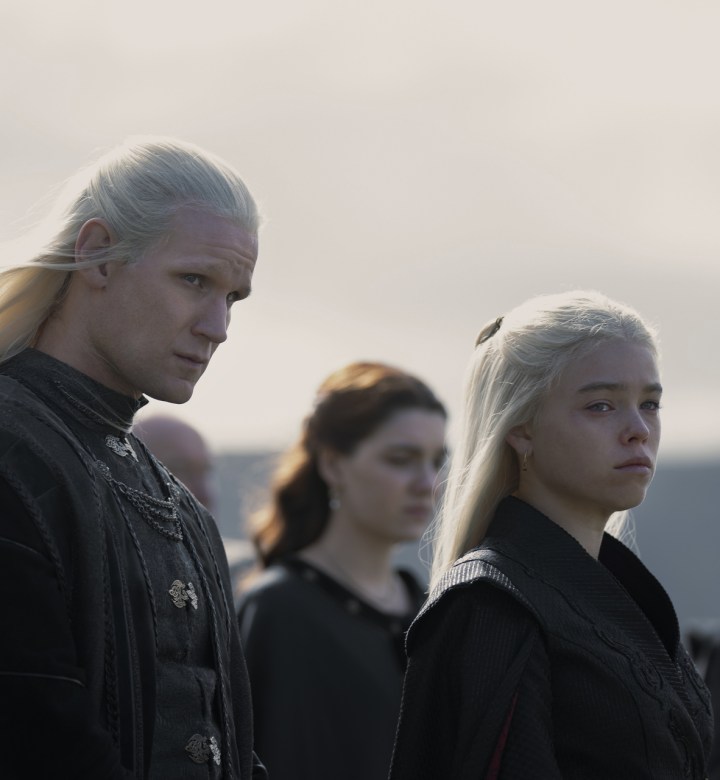 In the chambers of the Hand, Alicent and Otto meet, with him suggesting that she go to the King's chambers to provide him some comfort. She heads there, where Viserys is looking over a model, and she offers him a book that she thinks he'd enjoy.

Viserys summons Daemon to the throne room, where Viserys demands to know if Daemon gave the child the nickname. Daemon is cagey about it, with Viserys yelling and telling him that Daemon would be nothing without him. Daemon fires back and asks why, after ten years, he was never asked to be Hand of the King, why he was sent away, and that Otto is the one who is betraying him. Viserys orders Daemon to return to Runestone where his wife is and that Rhaenrys will be named Heir to the Iron Throne, the first woman in history to become the leader of the Seven Kingdoms.

Rhaenyra meets with Viserys in the tomb of the dragons, where the great skull of Balerion the Dread is located. He asks her what she sees when looking up the bones of the dragons, and she says she sees their family. "Everyone says that the Targaryens are closer to Gods than men. But without them, we're just like everybody else."

Viserys says that the idea they control the dragons is an illusion and that they very well could bring about the world's doom. He apologizes to her, saying he neglected her for all these years by longing for her son, not realizing that his Heir was right in front of him the whole time. Viserys informs her that she will be Queen upon his death and warns that the Throne is the most dangerous seat in the entire realm.

He also tells her of a prophecy seen by Aegon the Conqueror that the end of the world would come from the distant north after a terrible winter. Absolute darkness would ensue with whatever dwells within it, bringing about the extinction of humanity. He says that the King must keep this a secret and prepare the realm for when this war finally arrives. Westeros must be united in this fight; otherwise, the world will end.

As he clutches the dagger that Arya Stark will one day use to kill the Night King, he makes Rhaenyra promise that she will keep this secret and help prepare Westeros for what's coming. 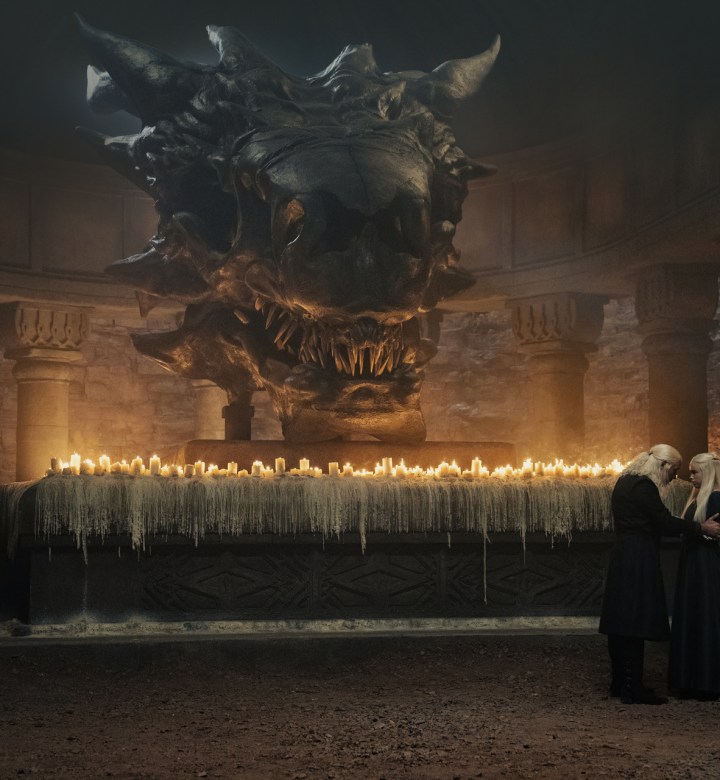 Like many of us, I was apprehensive about reapproaching the world of Westeros following Game of Thrones. The show ended up being so disappointing that it was hard to imagine any other content from that world being anything worth watching. However, House of the Dragon was a step in the right direction and has gotten me reinvested into this universe.

We're only one episode in, but it was a stark reminder that there is so much left to explore here and that George R.R. Martin's creation has so much potential to craft great stories.

House of the Dragon has a ton of potential, but the discussion towards the end of the episode regarding the future threat of the White Walkers didn't hit as hard as I hoped. Knowing how that storyline ends, it isn't easy to get interested once again in a plot surrounding keeping secrets regarding that prophecy.

Overall though, House of the Dragon was a welcome return to Westeros, and I can't wait to see what comes next.