'House of the Dragon' Episode 8 Recap and Review: "The Lord of the Tides" 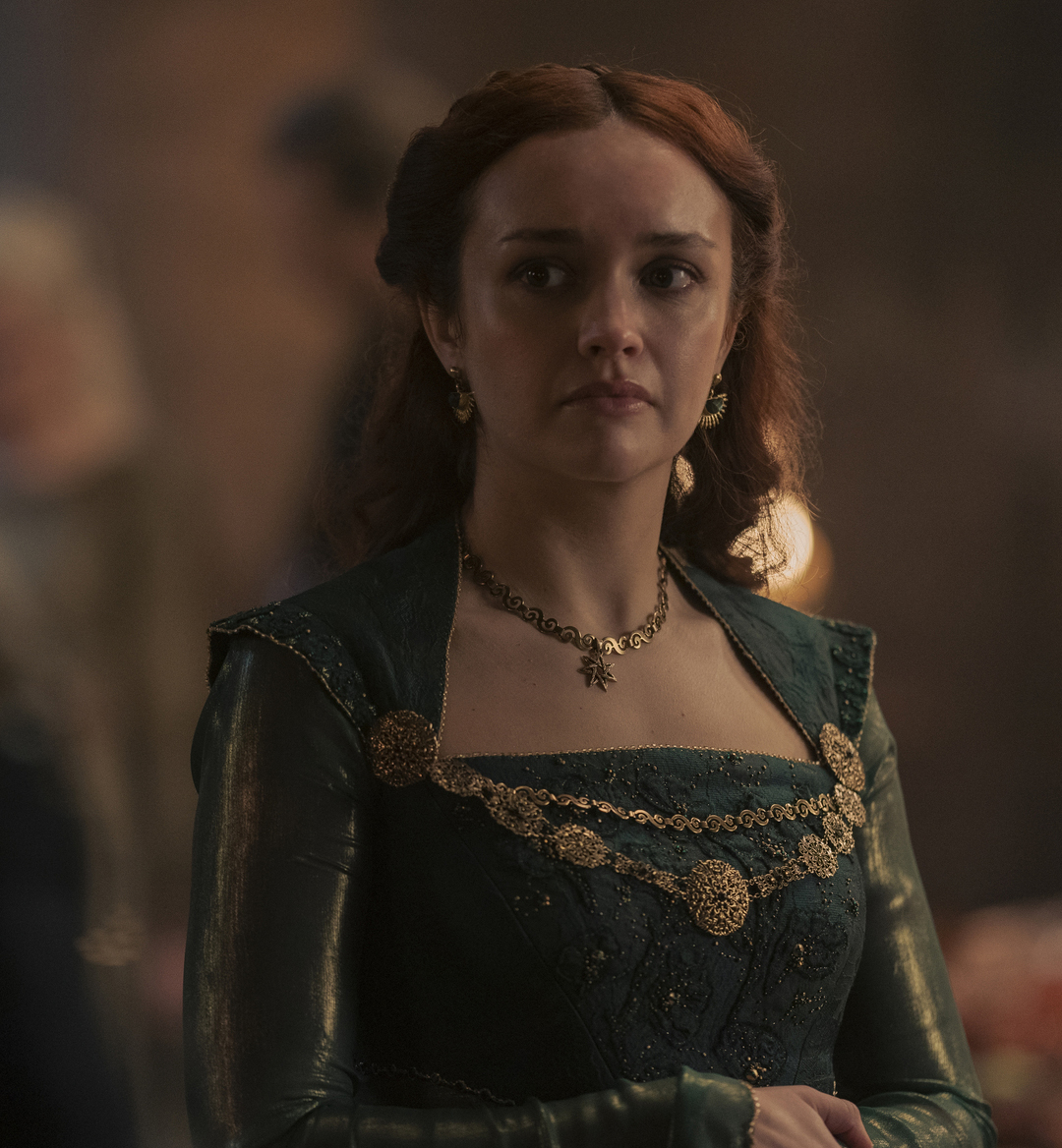 HBO loves to greenlight shows either named Succession or based around the practice, like House of the Dragon. While most of the first season, as well as the upcoming "Dance of the Dragons," revolves around who will sit on the Iron Throne, "The Lord of the Tides" centers on a different seat of power: The Driftwood Throne of Driftmark.

"The Lord of the Tides" saw the show undergo another time jump, possibly the last for now, bringing the major characters together for, perhaps, one final time. The conflict has been brewing for the entirety of House of the Dragon's run, but it is only now that we feel the war could start at any moment.

As much as Viserys hoped for peace, I doubt that a dinner about the importance of family would do much to settle the beef.

Sire, There are Succession Problems...Again 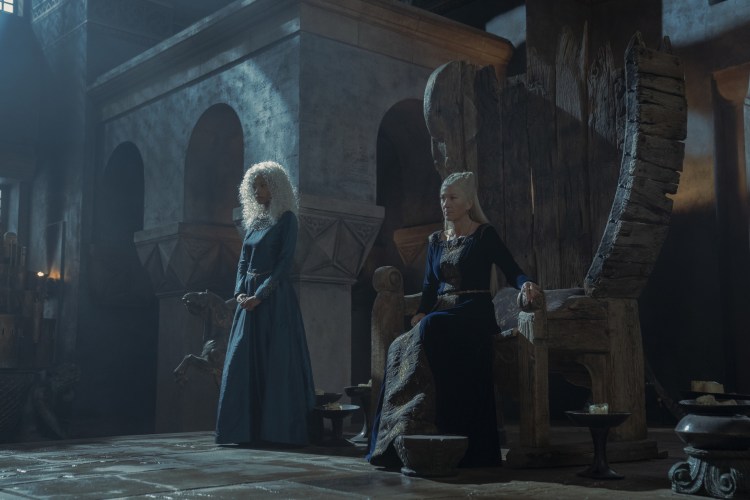 Six years have passed in House of the Dragon, and the Sea Snake, Corlys Velaryon, has been possibly fatally injured in a conflict in the Stepstones with the Triarchy.

Those Triarchy troublemakers just can't stop themselves from fighting. Come on, guys, let's give peace a chance!

Rhaenys, in Corlys' absence, sits on the Driftwood throne, and she asks a Maester whether or not her husband will live. He reports that things aren't looking good for him as his wound has likely become infected, and he is rather sick. Corlys' brother Vaemond brings up what will happen should Corlys die. Like many in the Realm, Vaemond doesn't believe that Rhaenyra's son Lucerys—the rightful heir to Driftmark by law—is his blood relative and has no claim.

Basically, he believes that Lucerys, "Luke," is a bastard, which is a treasonous offense to accuse someone of being if there is no proof.

Rhaenyra and Daemon, now married and living on Dragonstone with a couple of true-born kids of their own, receive a letter for everyone to gather at King's Landing to settle this dispute. Though not confirmed, it's hinted throughout the episode that Rhaenyra may be pregnant again.

Things have changed quite a bit at the Red Keep in the six years that Rhaenyra has been gone. Since her near stabbing of a child in the last episode, Alicent embraced the Seven and gave the castle a bit of a makeover. The symbol of the religion adorns the Red Keep's interiors, causing Rhaenyra to remark on how she barely recognizes her own home.

Rhaenyra and Daemon go to visit Viserys, who, after six years, is barely clinging to life and has decayed to such a point that he resembles Two-Face from The Dark Knight. As much as he can be, he's thrilled to see his daughter and brother. Daemon struggles to see his brother like this as he tries to inform Viserys of the latest developments. Rhaenyra introduces her father to his new grandchildren, Aegon and Viserys.

In a pair of scenes designed to show that, despite her skills as a cunning politician, Alicent can show compassion for those she does not see as her enemy. After being made aware that a chambermaid has been raped by her son Aegon, she ensures that the girl will not become pregnant (the Westerosi plan B strikes again) and confronts Aegon. Her son expresses no remorse for his actions, calling the rape "harmless fun." It isn't until she calls him "no son of mine" that he is genuinely shaken, but Alicent isn't buying it. As she leaves, she hugs another serving girl instead of her son.

Alicent greets Rhaenyra and Daemon, who accuse her of keeping him sidelined with medication so that she and her father can rule the Kingdom. Before their conversation ends, she tells them that she and Otto will preside over the proceedings concerning the Driftmark succession.

And the Next Lord of Driftmark Is... 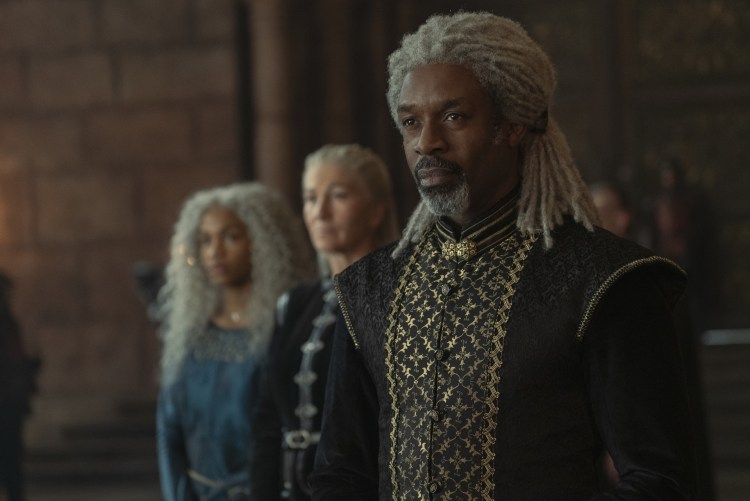 After he arrives at King's Landing, Vaemond meets with Alicent and Otto to discuss the succession and who will control Driftmark and the largest fleet in Westeros. Otto seems to be on Vaemond's side as he will be more loyal to the Hightowers, but Alicent remains unsure.

Rhaenyra and Rhaenys have a tense discussion at the Weirwood tree regarding Laenor's "death" in the previous episode. To settle their rift, Rhaenyra proposes that her son Jace, the heir to the Throne after her, marry Baela, making Rhaenys's granddaughter the future Queen. Rhaenys tells Rhaenyra that she cannot accept the offer, at least not yet, because she must maintain neutrality for the moment.

Rhaenyra visits her father, who at first thinks her to be Alicent. She asks him if she believes that the prophecy of The Song of Ice and Fire is true and confesses that the burden of power may prove to be too much. She asks him to defend her and her son's claim to the Throne, the only person in the realm whose opinion can genuinely settle the matter.

As the Maesters painfully dress his wounds and clean him up, Viserys tells Otto he wants the family to have dinner together. Despite his pain, he refuses Milk of the Poppy, which would alleviate his suffering but also will dull his senses.

As the Hand of the King, Otto presides over the succession hearings, with Vaemond laying his claim that his blood is true, implying his line is the only real Velayron one in the room.

Rhaenyra begins her defense of her son but soon, the doors to the hall open up. A crippled Viserys enters and, despite his wounds, injuries, and decay, makes his way without help to the Iron Throne. He takes his seat, ready to hear what everyone is complaining about.

Viserys only wants to hear from one person: Princess Rhaenys, who, as Viserys says, will have the best insight into what Corlys wants. Rhaenys affirms what Rhaenyra wants to hear: Her son Luke is the rightful heir to Driftmark, and her sons Jace and Luke will marry Rhaenys' granddaughters, Baela and Rhaena. Viserys declares the matter settled and reaffirms Luke as the heir to Driftmark.

He accuses Viserys of treason, saying he will not allow it, and finally does what everyone was waiting for him to do. He loudly calls Jace and Luke bastards in front of the whole court, which is, as mentioned above, a treasonous offense. Oh, and he also calls Rhaenyra a whore, just because he realllllllly wants to seal his fate.

Viserys pulls out his dagger, saying he will have his tongue for that. He never gets the chance because Daemon slices Vaemond's head in two, sending his body crumbling to the floor in a bloody mess.

Despite collapsing onto the Throne, Viserys refuses Milk of the Poppy, not wanting to cloud his mind. 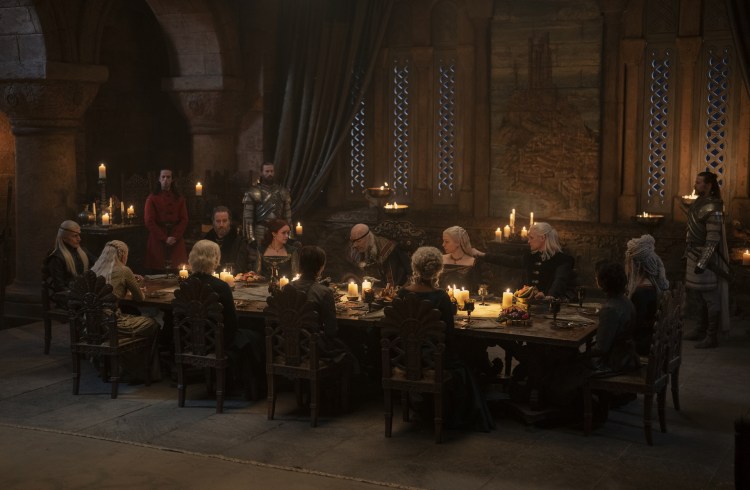 The family gathers for dinner as Viserys requested, with Alicent and Rhaenyra seated next to the King. Viserys longs for peace between both sides of the family, celebrating the future marriages of Jace, Baela, Luke, and Rhaena.

Viserys, knowing his time is nearly at an end, says that seeing his entire family together makes him happy. Longing to see them all, he removes a mask covering the side of his face that had decayed to the point of losing an eye. He says they need to be united for the crown’s sake to appear united, but if not for the Realm, then do it for him, whose life is at the end.

Rhaenyra raises a cup to Alicent, thanking her for staying true and loyal to Viserys as his health worsened. Alicent thanks Rhaenyra for her graciousness, saying they are both mothers who love their children and tell her that she will make a good Queen.

It seems the tensions have simmered for a moment, at least amongst the adults. Aegon has been insulting Jace the entire dinner and tells Baela that if she ever wants to be satisfied, she should let him know. Jace is ready to fight him but holds back, raising his glass to Aegon and Aemond, a development that disappoints Aegon: The guy who just wants to stir the pot.

Viserys looks around the room, seeing his daughter and wife both laughing, his grandchildren dancing and having fun, a final wholesome moment before he needs to be removed by the guards.

Feeling the need to ruin everyone’s good mood, Aemond raises his glass to “honor” Jace and Luke, calling them “Strong” boys, finally sending Jace over the edge. Jace punches Aemond, which he laughs off, shoving Jace to the ground, and Aegon slams Luke’s face into the table. Daemon and Aemond (who creepily look like one another) exchange glances before Aemond leaves. Rhaenyra tells Alicent that they’ll head back to Dragonstone, but she will return to King’s Landing by Dragon once they get home, which Alicent says she’d like very much.

As Viserys lays in bed, struggling to breathe and stay conscious, Alicent tries to ease his pain. Believing her to be Rhaenyra, he tells her about Aegon’s dream, The Song of Ice and Fire. Alicent only hears him speak about Aegon, but Viserys is trying to say that Rhaenyra is the one to unite the Realm against the coming threat. Alicent takes this as Viserys wanting Aegon to take the throne (and, in essence, Alicent herself.) She eases attempts to comfort him before leaving the room, saying, “I understand, my King,” and leaves the room.

Viserys, still clinging to life, says to the darkness, “No more.” As he clutches the ring Aemma gave him all those years ago, he utters his last words: “My love.” 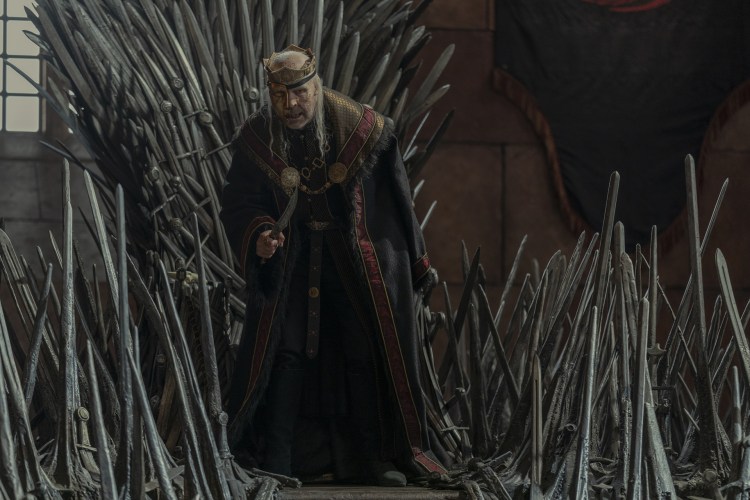 Allow me to raise a glass of my own to Paddy Considine, who, in what is likely his last appearance on House of the Dragon, put the whole damn show on his back this week. His performance as the decrepit King Viserys, longing for an end to both his and his family's suffering, was Emmy-worthy. Or, at the very least, worthy of a nomination.

His death had been a long-time coming, but now that it has happened, we should all be thankful that he will not see the chaos that is to come. House of the Dragon's entire narrative has been built upon Viserys' death and the war that follows. With the pieces now in place, the war between both sides, The Greens and The Blacks, is closer than ever. Viserys will rest in peace, but the Realm is about to explode in a fury not seen in over a century.

I'll miss Considine on the show, whose character, for all his shortcomings, seemed to be the only one who wanted to ensure conflict didn't begin. His decisions may not have always been the right course of action, but it's hard to deny that his desire for peace wasn't there.

War is imminent, and while it likely won't begin in earnest until the second season, the conflict will certainly bubble to the surface. The ninth episode of every season of Game of Thrones was known to be the entry where shit went down. Will House of the Dragon follow in its predecessor's footsteps?

Anything's possible in this world of ambition.