'House of the Dragon' Episode 9 Recap and Review: "The Green Council" 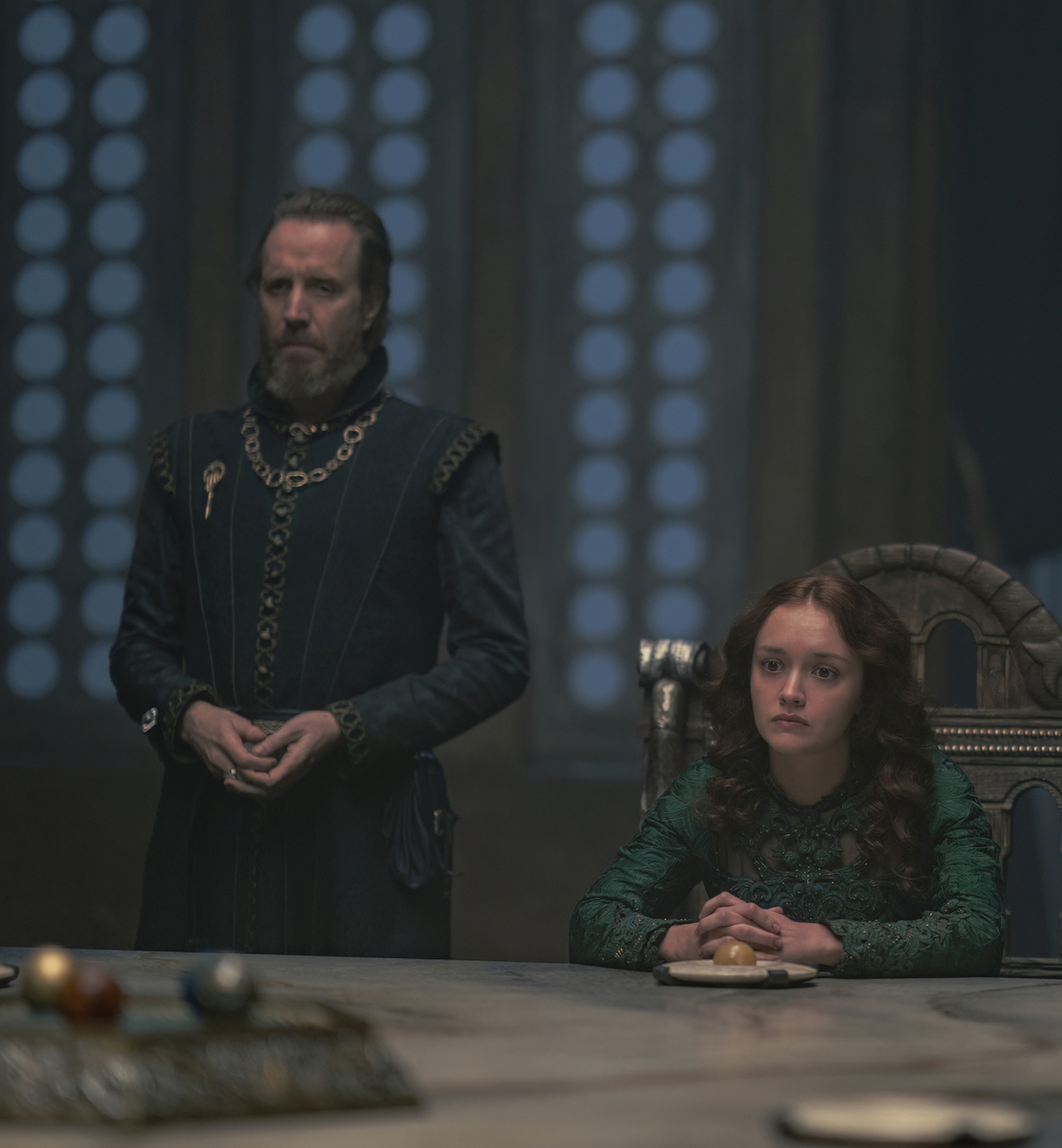 If we've learned anything throughout House of the Dragon, the adage "When you play the Game of Thrones, you win, or you die" has been proven true over and over again. In Game of Thrones, there were various lords and a distant Queen squabbling over who would sit on the pointy chair. In House of the Dragon, it's two sides of the same family, torn apart by ambition and a sense of duty.

Where In the World Is Aegon Targaryen? 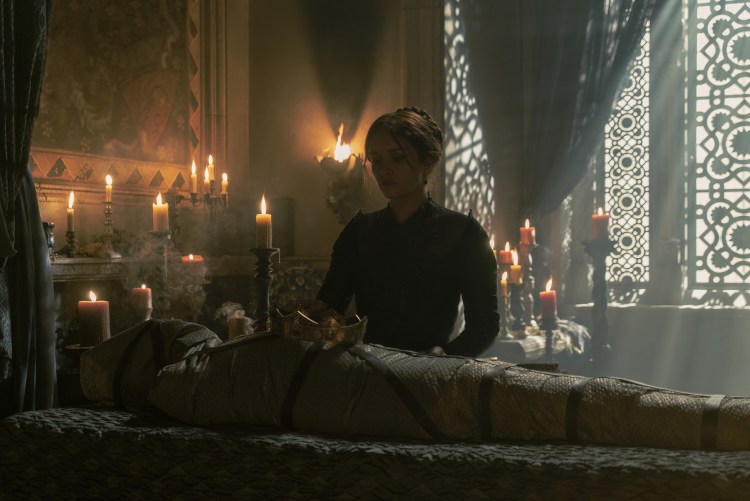 This week's House of the Dragon picks up in the immediate aftermath of King Viserys' death. As Talia, Alicent's Handmaiden and a spy on behalf of the "White Worm," is made aware, Alicent awakens in a panic, realizing what this now means. As will become important later in the episode, Talia lights a candle in the window of her room, a signal to the White Worm that the King has passed.

Alicent tells Otto that she believes that Viserys wanted their son Aegon to be King and not Rhaenyra. "It's the truth, out of his own lips," she tells him. Being the conniving bastard he is, Otto naturally seizes upon the moment to, well, seize power. They gather the Small Council to inform them of Viserys' death and what the plan for the future is.

Unsurprisingly, they were ready for this, and everyone on the Council, except Lord Beesbury and Alicent, was ready to get Aegon on the Throne. He might have been a bit of an oddball in his life, but Lord Beesbury says what we are all thinking: It's wrong, treasonous, and is theft.

What does he get for his honor? His face bashed into the table by Alicent's resident goon, Ser Criston Cole. It wasn't intentional, given the Queen's reaction, but this causes the Lord Commander of the Kingsguard, Lord Westerling, to pull his sword on Criston. Westerling demands that Criston take off his cloak and surrender for his crime. Criston backs down, but Lord Westerling, much like Beesbury, sees this as an act of treason.

Alicent asks what they will do about Rhaenyra, and she knows that both she and Daemon will not surrender or bend the knee. If they aren't imprisoned or exiled, the Council agrees they must be killed. After Otto orders Westerling to take his knights to Dragonstone, he throws down his cloak and leaves in disgust.

Alicent tells her children, Helaena and Aemond, that their father is dead.

Helaena, being ever the strange woman that she is, utters an incredibly mysterious phrase: "There is a beast beneath the boards" in response. So cryptic, but it'll make sense a little later.

Ser Erryk, one of the Kingsguard assigned to Prince Aegon, is assigned by Otto to find Aegon, who has left the Keep and gone into the city. Otto tells him to take his brother, Arryk, with him and go in disguise.

Rhaenys finds herself locked in her chambers, a prisoner of the Hightowers for the moment. Larys has also rounded up all of the servants who know of Viserys' death and locked them in the dungeons.

Alicent assigns Criston to find Aegon for her own aims, and Aemond volunteers to go with him. The two duos look for Aegon, one more conspicuously than the other, with no success so far.

Otto gathers some of the various lords and ladies of the Realm to tell them of Viserys' death, Aegon is the rightful heir, and they must swear allegiance to him. Some kneel immediately, but the Lord of House Fell tries to leave to "confer with his house," as well as Lord Caswell, who eventually bends the knee albeit reluctantly.

Caswell later attempts to escape King's Landing to warn Rhaenyra of what is to come and gets hanged, with his body left in the courtyard for all to see. 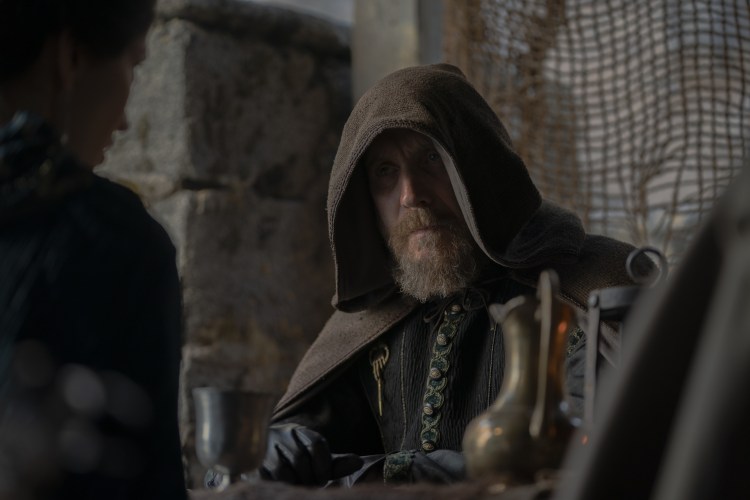 Erryk and Arryk (please, can we work on these names, House of the Dragon writers) find themselves in a children's fight club. A far cry away from the "dignity" of the Red Keep. They spot one of Aegon's bastards, whom Erryk knows about since he usually's at his side.

Aemond, believing he is more deserving of the Throne, vents his frustration to Criston. He doesn't outright say it, but you can tell he doesn't care if his brother is ever found.

The dynamic duo, Erryk and Arryk, are approached by an aide of the White Worm. The White Worm turns out to be Daemon's old flame, Mysaria, and claims to know where Aegon is. She will only negotiate with Otto, whom she has a working relationship with, as we saw in "King of the Narrow Sea."

Alicent meets with Rhaenys and tells her of Viserys' "wishes." Rhaenys, not easily fooled, doesn't believe her, seeing through her veiled attempts at winning Rhaenys over to her side.

Otto meets with Mysaria, who knows about Viserys' death, much to Otto's surprise. Mysaria found Aegon and has hidden him away, anticipating this meeting. Other than gold, she demands that Otto work on actually fixing the problems in the slums of King's Landing instead of ignoring them like they always have. She reminds Otto: "There is no power but what the people allow you to take."

Erryk and Arryk find Aegon hiding in a Sept and, despite his protests, manage to drag him outside, where Aemond and Criston confront them. Criston and Erryk begin dueling while Aemond gives chase to Aegon. Erryk yells for his brother's aid, but Arryk refuses and leaves his brother behind.

Eventually, Aegon and Erryk are subdued, with Aegon asking his brother to let him go, and he'll go into exile, allowing Aemond to become the King. Aemond looks to consider it, but Criston takes him away before Aemond can give an answer.

Meeting with her father, Alicent tells Otto that she has finally had enough of his scheming. They've found themselves on opposite sides of this debate over Rhaenyra, and it looks as if there's no going back. Alicent tells Otto that Aegon will be crowned by her terms and that Rhaenyra will not be touched. Otto, in a way, admires her for this and seems to agree to her terms begrudgingly.

If ever there was a person that embodied the "oh this fuckin guy!" scene from Uncut Gems, it's Larys Strong. The King of creepiness surprises Alicent in her chambers and tells her that Talia is a spy for the White Worm. In addition, Otto knows this and utilizes that spy network to his advantage.

As he explains this, he holds back a bit, getting Alicent to remove her shoes and stockings, showcasing her feet to Larys. He tells her that Mysaria should be killed to secure her secrecy. She basically gives him the green light as he looks at her feet and, well, pulls his pud, so to speak.

Eventually, we see that a hooded figure has set fire to Mysaria's home in an attempt to assassinate her. However, as we all know, no one is dead if there is no body.

Arryk attempts to sneak Rhaenys out of the castle, knowing that she's likely in a ton of danger. He tries to get her to the harbor, but they are split up in the city as the people are gathered by soldiers, forcibly being sent to the Dragon Pit to witness Aegon's coronation.

The Beast Beneath the Boards 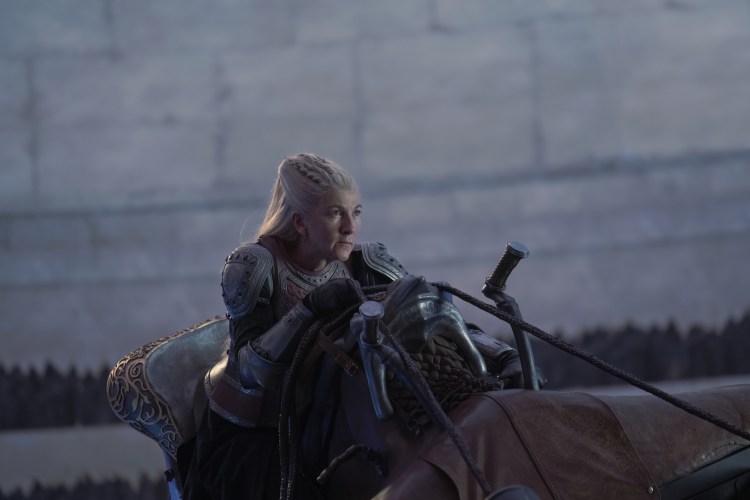 As the preparations are made for the crowning of Aegon, he is taken to the Dragon pit with Alicent. He still laments that he doesn't want the crown (okay, Jon Snow), but Alicent tries to remind him of all the effort that went into getting him here. Aegon, like so many, doesn't believe her when tells him that Viserys wanted this, "He had 20 years to name me heir and never did."

Alicent gives him Viserys' dagger, the weapon with the "Song of Ice and Fire" prophecy on it, and Aegon begins to believe his mother. He asks her if she, unlike his father, loves him. "You imbecile," she responds.

He reallllllllly fails to grasp the gravity of this situation, doesn't he?

The citizens of King's Landing gather in the Dragon pit to witness the coronation, something Alicent insisted on. Rhaenys is among them, having been unable to link back up with Arryk.

Otto announces Viserys' death and that Aegon will be the one succeeding him. A quiet pause falls over the crowd, followed by eventual applause, leading to Aegon's entrance into the pit surrounded by Targaryen soldiers.

As Aegon is blessed by a priest of the Seven, Rhaenys sneaks away from the crowd and down into where the dragons are kept. Ser Criston, now the Lord of the Kingsguard, places the crown on Aegon's head, with Aemond ominously looking on in envy.

The Royal Court bows to him, and the crowd slowly begins to clap in confusion but eventually erupts in applause. He unsheathes his sword triumphantly, with Otto looking upon his work in triumph. He made this day happen, and it's gone perfect-

Suddenly, a massive dragon, Meleys, comes crashing through the ground. The poor citizens of King's Landing are caught in the middle of this, with hundreds of them killed or injured. As is tradition in both House of the Dragon and Game of Thrones, no one seems to care about them.

Meleys is ridden by Rhaenys, who, clad in some fresh armor, turns the dragon toward Alicent and the Royals. Alicent closes her eyes, anticipating to be burned by Meleys but Rhaenys holds back and the dragon just roars instead.

As the dragon prepares to fly out of the pit, causing a bunch of destruction along the way, the gold cloaks try to shut the doors on the people fleeing, despite Otto ordering them to open them. Meleys and Rhaenys manage to escape the pit and flee King's Landing, heading to Dragonstone to inform Rhaenyra and Daemon of what the hell just happened. 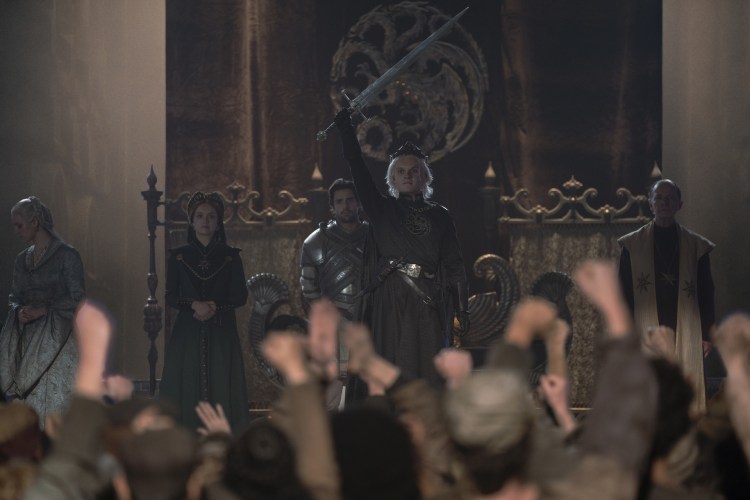 It's such a silly thing to get held up on, but the fact that Criston Cole murdered one of the members of the Small Council and nothing happened bothered me throughout my watch of this episode. The murder of Lord Beesbury might come back to haunt Criston, but for now, he is basically free to do whatever the hell he wants.

Also, I hope all the bad things happen to Criston Cole. Dude STINKS.

The biggest point of discussion at the end of this week's House of the Dragon is a logical one: Why the hell didn't Rhaenys just blow her enemies away? End the war before it starts? These are fair questions; I mean, it does make sense.

However, Rhaenys has never struck me as someone who was willing to kill members of her family to further her own goals. Other people in House of the Dragon (cough, cough, Aemond) certainly would, but Rhaenys has some sense of honor, at least as much as one can have when you're responsible for the deaths of hundreds of innocent people.

Rhaenyra and Daemon are about to learn of everything that has happened in King's Landing. With the war to follow, given that the crown has been stolen from her, one things's for sure: It's about to get ugly.