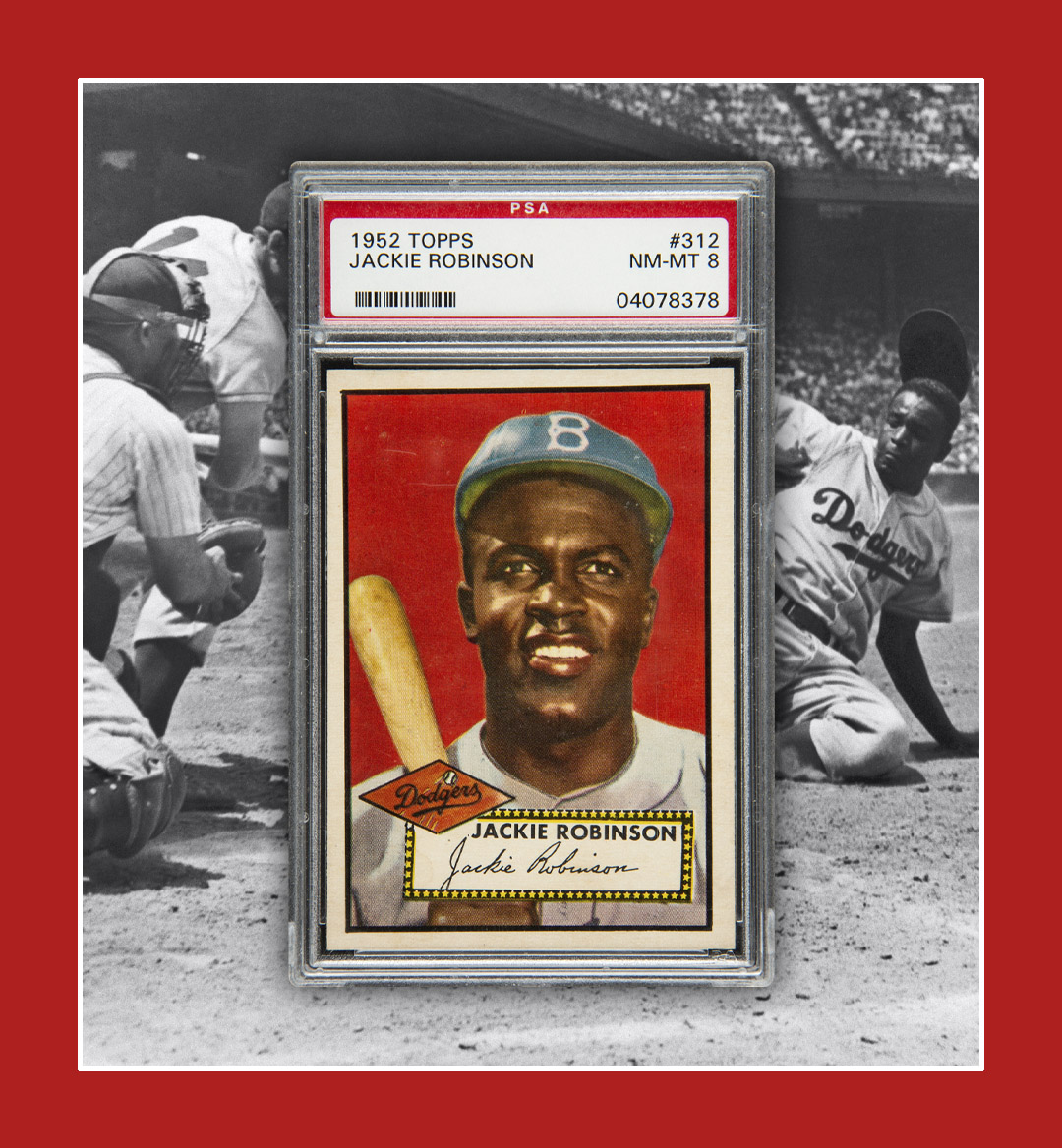 Before we talk about the top Jackie Robinson baseball cards, let's talk about the man. In all of sports, few individuals remain as iconic and revered as Jackie Robinson. He’s the only player in any professional sport to have his number retired by every franchise.  A paramount advocate of civil rights, Robinson endured unrelenting prejudice and scrutiny in his military and baseball career.  Nevertheless, he persevered through all of this and ended his playing days as an MVP and World Series champion.

Born in 1919, Jackie was a standout star at UCLA before playing for the Kansas City Monarchs in the Negro leagues.  After stints for minor league ball clubs, he made his Major League debut on April 15, 1947, becoming the first baseball player to break the color barrier.  He would go on to play for nine more years before retiring in 1956.

The Top Jackie Robinson baseball cards, much like the cards of his former teammate and rivals, remain as staples from the golden era of trading card collecting.  The vibrant hues and designs from early Topps and Bowman designs hold up exceptionally well.  And, in an increasingly digitized world, Jackie’s cards stand out as powerful remnants of postmodern Americana.

Today, we are going to do a deep dive into the top Jackie Robinson baseball cards.  We will also talk about the market for these vintage gems and their rarity. So, without further ado, let’s get right into it: 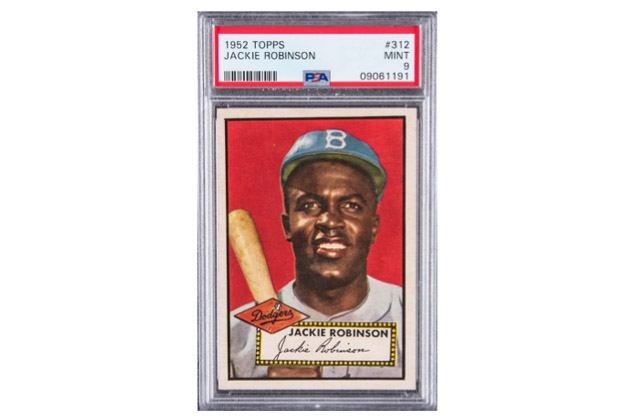 The importance of the 1952 Topps Baseball set has been well documented over the years. Containing some of the most valuable pieces of cardboard in existence, this set features unrivaled artwork and detail that we just don’t see in modern products.  And the Jackie Robinson #312 is no exception.  This is Jackie’s most expensive card to date, reaching a price of $960,000 in 2021.

The cards from ‘52 Topps are a slightly bigger size than the 2.5” x 3.5” dimensions we see in most products today.  These cards were also found in the bike spokes and baskets of many young collectors in the 50s. Finding one in the PSA 9 condition shown above is quite a daunting task.  There are currently no PSA 10s registered, and with 70 years gone by, it’s unlikely that an ungraded copy has remained in perfect condition all this time.

Lower graded versions of the #312 can be found online for a lot less than $960,000.  This is a card that stands at the top of many holy grail lists, and it’s undoubtedly one of the best baseball cards in history. 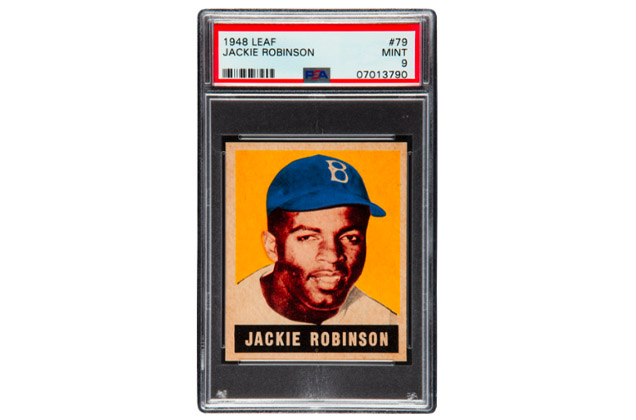 The 1948 Leaf #79 is considered by most to be his true rookie card. The sharp contrast between the blue Dodger cap and yellow background makes this card pop nearly 75 years later.  This PSA 9 sold for $336,000 in 2018. With no existing PSA 10s, it would probably bring an exponentially higher auction price in today’s market.

A PSA 8 copy sold in February for over $470,000, marking the highest price for any Leaf trading card.  This is one of the most sought-after post-war cards, and it deserves a spot on pretty much any vintage baseball card list out there. 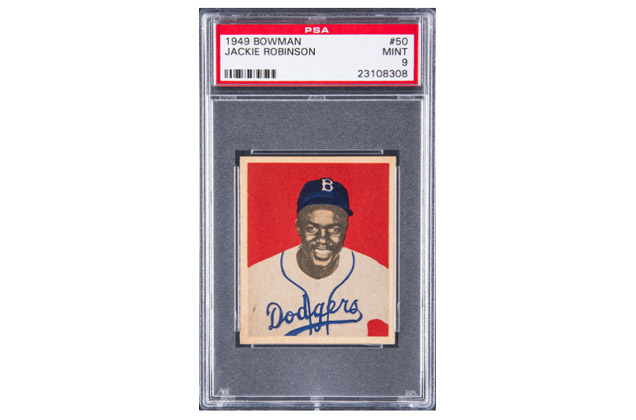 Here is the first showcased card from Bowman, who produced cards independently until being acquired by Topps in 1956.  Much like the 1948 Leaf, it doesn’t resemble the traditional trading card size that we see today. And, much like the 1952 Topps, it features a crisp red background that beautifully contrasts the famous Dodger blue on Robinson’s jersey and cap.

Like most on this list, this card has yet to produce a PSA 10 grade.  However, there are ten PSA 9s in the registry at this time, with one reaching a sale price of $510,000 in April 2021.  You can find lower-grade PSA, Beckett, and SGC copies for sale on eBay, and the color still pops on those seven decades later. 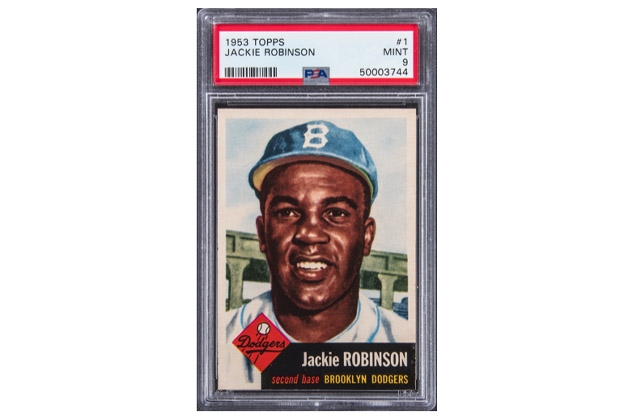 The ‘53 Topps is unique for this list because it’s the only card where Jackie is #1 in the set.  It is also an extremely tough grade due to the black edges and corners on the bottom right.  Remarkably, there is still a single PSA 10 in the registry, but it has yet to surface for an auction.

Jackie hit for a phenomenal .329 batting average in 1953 and helped to continue Brooklyn’s string of success.  This Topps design is almost as iconic as its predecessor., The PSA 9 copy above sold for nearly $300,000 last year, the second-highest sale for a 1953 Topps card, with Mickey Mantle’s PSA 9 being the only card to sell for more. 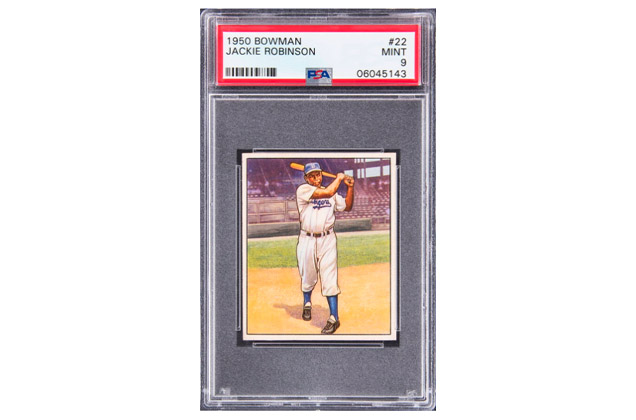 This beauty from 1950 Bowman is the first on the list to feature an “action” shot.  The card pictured shows Jackie’s follow-through after he takes a swing.  The background also showcases historic Ebbets Field, the former home of the Brooklyn Dodgers.

There are twelve of these PSA 9s, which is very impressive considering the card’s small 2-1/16" by 2-1/2” dimensions.  This is Jackie’s second and last appearance in a Bowman set, which also speaks to the rarity of the item.  You can find this mini piece of artwork here, as lower grades tend to sell for only a fraction of the $120,000 PSA 9 price. 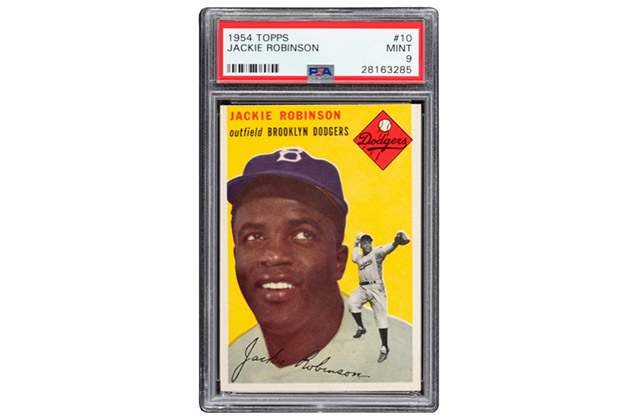 This card is the most affordable on the list so far, as ungraded singles can be picked up in the $200-300 range. A PSA 9, the highest grade for this card, sold for over $55,000 last year, marking another impressive price for a mint condition Jackie Robinson card. 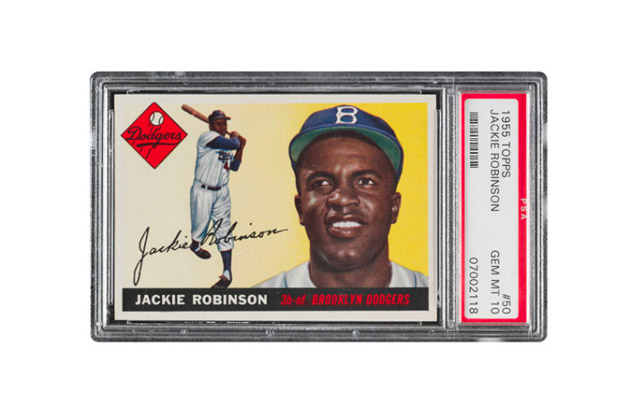 The first horizontal card on the list, 1955 Topps features Roberto Clemente and Sandy Koufax’s rookie cards. It's some of the most visually striking printed cardboard you will ever see.  Also of significance, it's the year of Jackie’s one and only World Series win, triumphantly defeating the Yankees in seven games.

This card is also the only one on the list to have a known PSA 10 sale.  In 2007, Memory Lane Auctions sold the sole Gem Mint copy for $44,000, and it would likely be 10x that price if it hit the market today. Conversely, a PSA 1 can be picked up for around $325, and it’s a necessary addition to any vintage baseball collection. 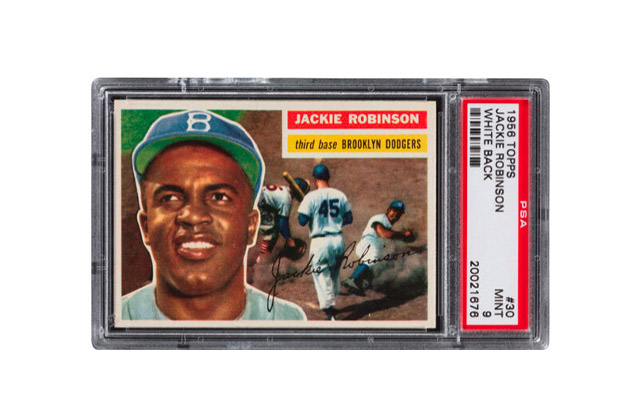 Number 8 on the list is Mr. Robinson’s last Topps card, and it is just as aesthetically pleasing as previous Topps copies.  In 1956, a 37-year-old Jackie hit for .275 and led the Dodgers to another World Series appearance, narrowly losing to the rival Yankees.

‘56 Topps also famously contains gray back and white back versions of its cards.  Cards #1-100 are typically sought after as a gray back, but the difference in rarity for series 1 cards is slim.  So, in the case of Jackie Robinson, you can typically find both for sale pretty easily. This includes a $75,000 sale of a PSA 9 copy last year, one of 17 in existence. 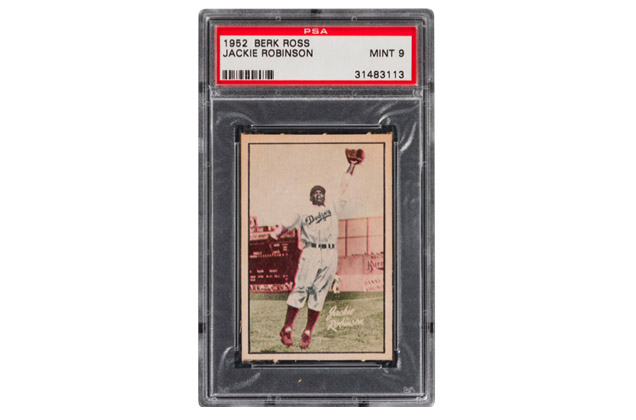 Here is the first “alternative” card on our list, which is a card produced by a smaller company that still remains relevant.  New York photographer Berk Ross released two sets in 1951 and 1952 that have achieved quite a fandom as time has passed.  Robinson does not have a card in the ‘51 set, but the slab above shows the Dodgers legend leaping in the air for his ‘52 photo.

Rare items like the Berk Ross set remind us of the importance of cards and the story they tell.  Almost every collector will know about Jackie’s 1952 Topps card, but cards like these just never appear.  There are only three PSA 9s out there and zero Gem Mint 10s.  The PSA 9 copy shown sold for over $100,000 last year, a true collector’s piece.  Lower-graded iterations for sale can be found here. 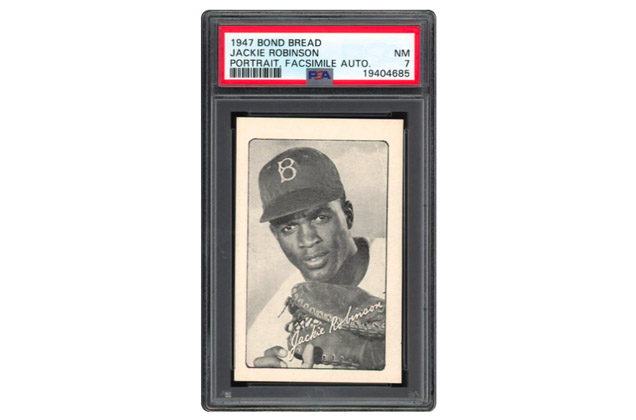 To round off our list, how about a card from … a bread company? In 1947, Bond Bread released a photo set that included 13 different cards of Major League Baseball’s first African American player. The copy shown above, which is the only one from the set to contain a facsimile autograph, sold for over $50,000 in May.  This is a big sale for alternative vintage cards, so it will be interesting to see if this set gains more traction in the hobby.

This is also the only card on the list from Robinson’s rookie campaign, a remarkable year where Jackie won ROTY and silenced many critics in the press.  This stunner from Bond Bread serves as a great reminder of that legendary rookie season.

Did we miss one of the top Jackie Robinson baseball cards? Let us know @CardTalkPod on Instagram and Twitter!