The 20 Best Movies Like 'Sicario' To Watch Right Now 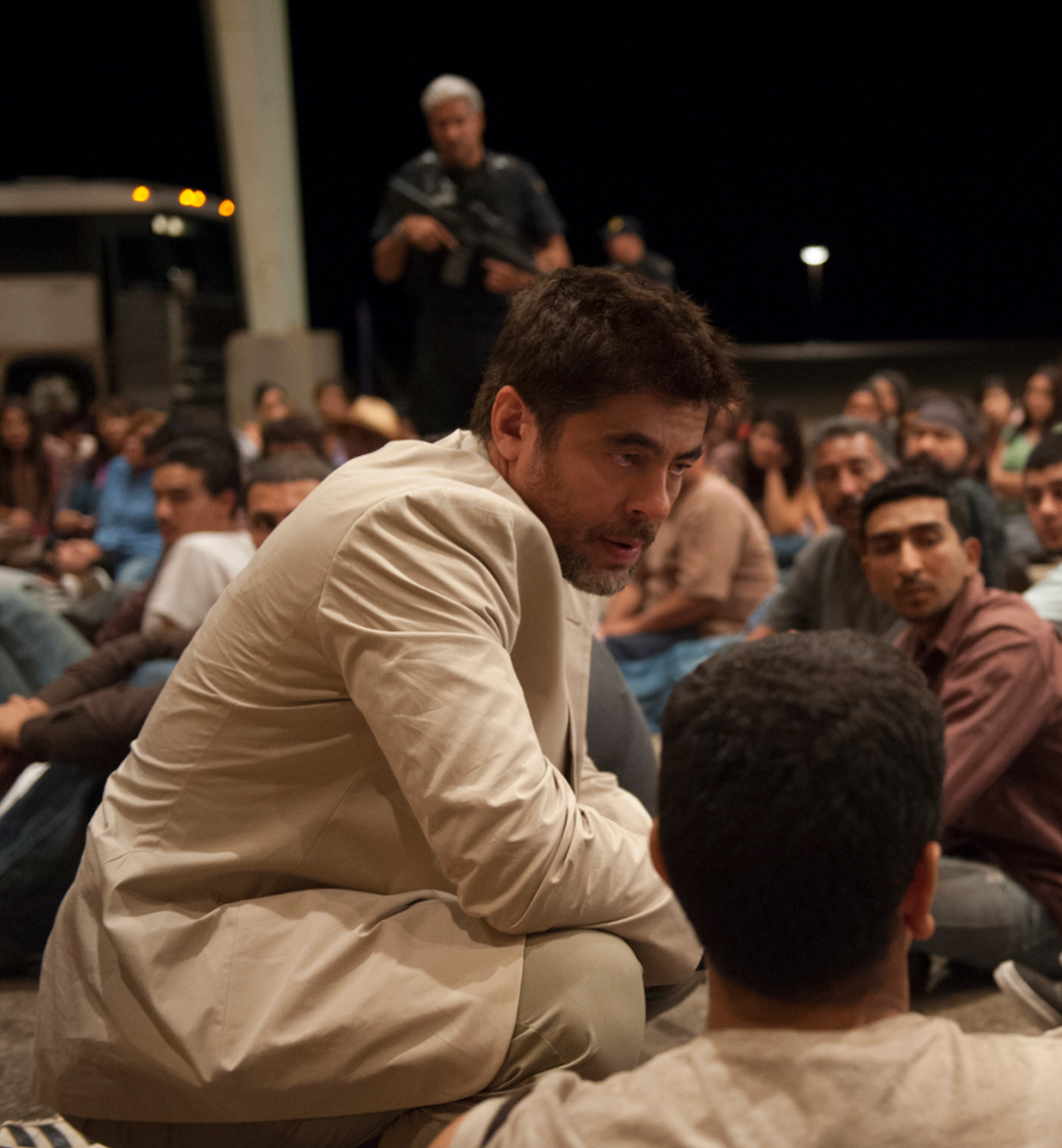 Modern audiences undoubtedly have an undying obsession with the drug cartel/drug war drama. Ever since the release of Sicario in 2015, audiences have been trying to find a new obsession within the subgenre. Television has provided the rabid fanbase with acceptable replacements, like Narcos and Ozark, but there's nothing quite like the experience of watching an unflinchingly brutal, repugnantly real depiction of the drug war on the big screen. Here are the 18 best movies like Sicario.

1. Sicario: Day of the Soldado

A directorial change didn't change much, except maybe for quality. Sicario: Day of the Soldado moved on from Denis Villeneuve and into the trustworthy hands of Stefano Sollima. Josh Brolin and Benicio Del Toro reprise their roles and deliver killer performances unsurprisingly. This film shares the brutal, mean, and raw qualities of the previous film, and possibly even ups the ante, but it falters in two specific ways.

Without Denis Villeneuve at the helm and Roger Deakins behind the camera, it never stood a chance of living up to its predecessor. So much of what made Sicario great was the overwhelming filmmaking prowess on display from those two masterminds. Hard-hitting, alienating cinematography, and clear and definitive direction and stylistic flair, Sicario: Day of the Soldado doesn't reach those heights, but it is a guaranteed hit for fans of the original.

Steven Soderbergh's moment in the Hollywood sun. A sprawling epic tale about the drug war told from multiple perspectives, so epic that it garnered Soderbergh an Academy Award for best director. Deservedly so, Traffic is a film that breaks the Hollywood norms in multiple ways, editing-wise, cinematography-wise, and structure-wise. A film so good that despite not following the typical oscar winner formula, it won anyway. Traffic, similar to Sicario is relentlessly brutal and realistic, while also being backed up by a filmmaker with a confidently bold vision. An absolute must-watch for Sicario fans.

One of Clint Eastwood's many late-career efforts that gives a middle finger to anyone who isn't already a fan. The Mule follows an elderly botanist, he becomes estranged from his family and fearing he might lose his business he unknowingly picks up a job as a drug mule. Tender, funny, and not to mention how thrilling it can be, The Mule is a film on the drug cartel from an unlikely point of view, and you certainly won't regret watching it.

The only feature film Hype Williams ever made, and it achieved borderline masterpiece status. Belly stars DMX and Nas as prominent figures in the hood, criminals, thieves, and drug dealers. Brutal and brilliantly made should be essential viewing for aspiring filmmakers and simple film lovers alike. Belly is less grand in scale than Sicario, but the stakes feel equally as high. From the opening scene (which the filmmakers nearly blew the whole budget on) you'll be hooked and never want the film to end.

Belly has to be seen to be believed.

I've mentioned the heavily stylized nature of Sicario a few times already, but Michael Mann's Miami Vice makes that look like a bland, uninspired exploit, for better or for worse. Michael Mann is a filmmaker who has been hailed for his understanding of the medium, while simultaneously ragged on for his insistence on unconventional decision-making. Miami Vice is off-putting in terms of visuals, a very "love it or hate it" type of thing, but enough of that.

In terms of content, this film shares many palpable similarities to Sicario. It has cartels, undercover missions, international consequences, and unflinchingly brutal action. Can't say that this one is a guaranteed hit, but it's worth a shot.

6. No Country for Old Men

This ruthless hunt film is another Academy Award winner, this time for Best Picture. Directing duo Joel and Ethan Coen teamed up with Roger Deakins, the cinematographer for Sicario, to provide a unique, beautifully violent visual experience. No Country for Old Men has everything a fan of Sicario wants, a three-way cat and mouse game with deadly consequences, drugs, money, and plenty of carnage.

One of the more recent entries on this list. American Made is an action-packed Tom Cruise feature directed by Doug Liman. Comedic, exciting, packed with criminal occurrences, and strangely down to earth. American Made follows Barry Seal, a pilot who transports contraband for the Medellin Cartel and the CIA. This film has been largely forgotten about since its release but its charm deserves credit and I recommend that fans of Sicario check it out.

Another one that shares a crew with Sicario. Wind River is directed by Taylor Sheridan, a recent breakout screenwriter turned director. Similar to Sicario, this film follows an FBI Agent thrown into a staggeringly dangerous situation. It is similarly brutal and unforgiving, but with the exact opposite setting, which makes it feel fresh and new.

A modern twist on Robin Hood set in New York with drug lords directed by Abel Ferrara, need I say anything else? King of New York is a political juggernaut of a film that follows Christopher Walken as Frank White, freshly released from prison drug lord dedicated to wiping out his competition and feeding the profits to the lower class. Tight, clean, and meticulous filmmaking, so much so that Ferrara has called his OWN filmmaking "fascistic." Despite that hyperbolized quote from the director himself, King of New York is a masterpiece of drug politics and thrilling violence.

Rest in peace to the king. One of Chadwick Boseman's final films was 21 Bridges, an exciting crime thriller featuring complicated internal relationships. Chadwick Boseman plays Andre Davis, an NYPD detective on a hunt for two cop killers amidst a large, layered, unexpected conspiracy. Relentless in its action and exciting in its chase format, 21 Bridges will not disappoint.

De Palma is perhaps the quintessential crime filmmaker out there. From Scarface, to Blow Out, to Black Dahlia, and finally back to Carlito's Way, this is a no holds barred look into the life of ex-con Carlito Brigante who, despite pledging not to return to a life of drugs and crime, gets sucked back in. Al Pacino gives the performance of a lifetime unsurprisingly, and with stellar set pieces and the violent thrills of the New York City underworld to go along with it, the film shines on all levels.

A recent Academy Award darling, garnering four nominations including Best Picture, Best Original Screenplay, and Best Film Editing. Yet another Taylor Sheridan screenplay put to film, so no surprise it has similarities to Sicario, with the same harsh setting, desperate visuals, and subtle build-up. In addition to this, the nomination for Best Film Editing will tell you that this is more than just an effort in storytelling, it's edited with style and flair in a similar way to Sicario, and that will not go unnoticed.

13. You Were Never Really Here

Short, sweet, and endlessly brutal. You Were Never Really Here is Lynne Ramsey's foray into the Action Thriller genre, but have no doubt, it packs an emotional and psychological punch. The film follows a PTSD-ridden veteran who has taken up the job of tracking down missing girls, and he is not afraid to use violence. In this film, Joaquin Phoenix's Joe uncovers a conspiracy that will send him spiraling down into the criminal underworld. This combined with his nightmares makes for a toxic cocktail of gore and psychological trauma. The action genre is stripped down to exactly what makes it great, and with a Lynne Ramsey mind games spin, an incredible film.

Worth putting on this list almost exclusively because Birds of Passage has what might be my favorite poster of any 2010's film. That personal bias aside, Birds of Passage follows Rapayet and his family, all of whom get caught up in the beginnings of the drug trafficking epidemic in Colombia. Getting wrapped up in this business leads to their lives, culture, and business getting destroyed. A political crime film that will satisfy the Sicario craving, despite it being noticeably less action-packed.

The criminal underworld of London, this movie features drug plots that admittedly are on a much smaller scale than Sicario, but strangely the same caliber of violence. The Gentlemen is a film that is centered around the leader of a successful marijuana empire in London, when word gets out that he wishes to leave the business, all hell breaks loose. Subplots with dastardly schemes, unrestrained violence, deception, bribery, and blackmail all run amuck. Fun, funny, and action-packed, do Guy Ritchie a favor and check this one out.

Yet another tale against the Colombian Drug Cartel, but this one features a prime Harrison Ford (did his prime ever really end?) Ford plays Jack Ryan, a CIA Analyst who gets thrown into the questionably "legal" war the U.S. government is waging against an ever-dastardly drug cartel. Fluctuating power dynamics, rough, gritty action, and a tasteful amount of off-the-cuff charm. Clear and Present Danger isn't exactly Sicario but it's as close to a guaranteed hit as I can see.

Blood Simple is the Coen Brothers' first feature film, and its dark hopeless pessimism truly shares similarities with Sicario. The owner of a small town bar throws himself into a deathly situation when he discovers his wife is having an affair with an employee. After this, a deliciously convoluted series of events, misunderstandings, lies, deception, and mischief ensues.

The beautiful part of the Blood Simple experience is that the viewer has to keep track of what each character knows, and how they use that information to fuel their actions. Potentially off-putting at first, but Blood Simple will pull you in whether you like it or not.

Had to include at least one other Villeneuve film on this list. Prisoners is not the most similar to Sicario content wise, following a father on an unending quest to find his missing daughter, but on a purely vibes level, it couldn't be more similar. Villeneuve's films whether you love him or not have an undeniable feel to them. A slow-burning, consistently tense action-packed thriller much like Sicario, but in a brand new setting.

A dramatic retelling of the singular most American moment to ever occur anywhere ever. The killing of Osama Bin Laden was the symbolic "end" to the war on terror but in reality the end to nothing. Zero Dark Thirty doesn't chronicle anything regarding drugs, but its breakdown of the intricacies of big government's war on evil is fascinating and strikingly real, this even more so than Sicario. This film was nominated for tons of awards, but most notably the Best Picture Academy Award, which it nearly took home over fellow American triumph, Argo.

A drug cartel tale literally titled Drug War, does it get any more similar? Johnnie To's Drug War is an action-packed crime film following a drug cartel boss as he deals with potentially needing to betray his accomplices and go undercover. To's films always feature incredible action so this is a safe bet. If you want a more exciting, unrelenting take on the Sicario drug-fueled drama, this is for you.