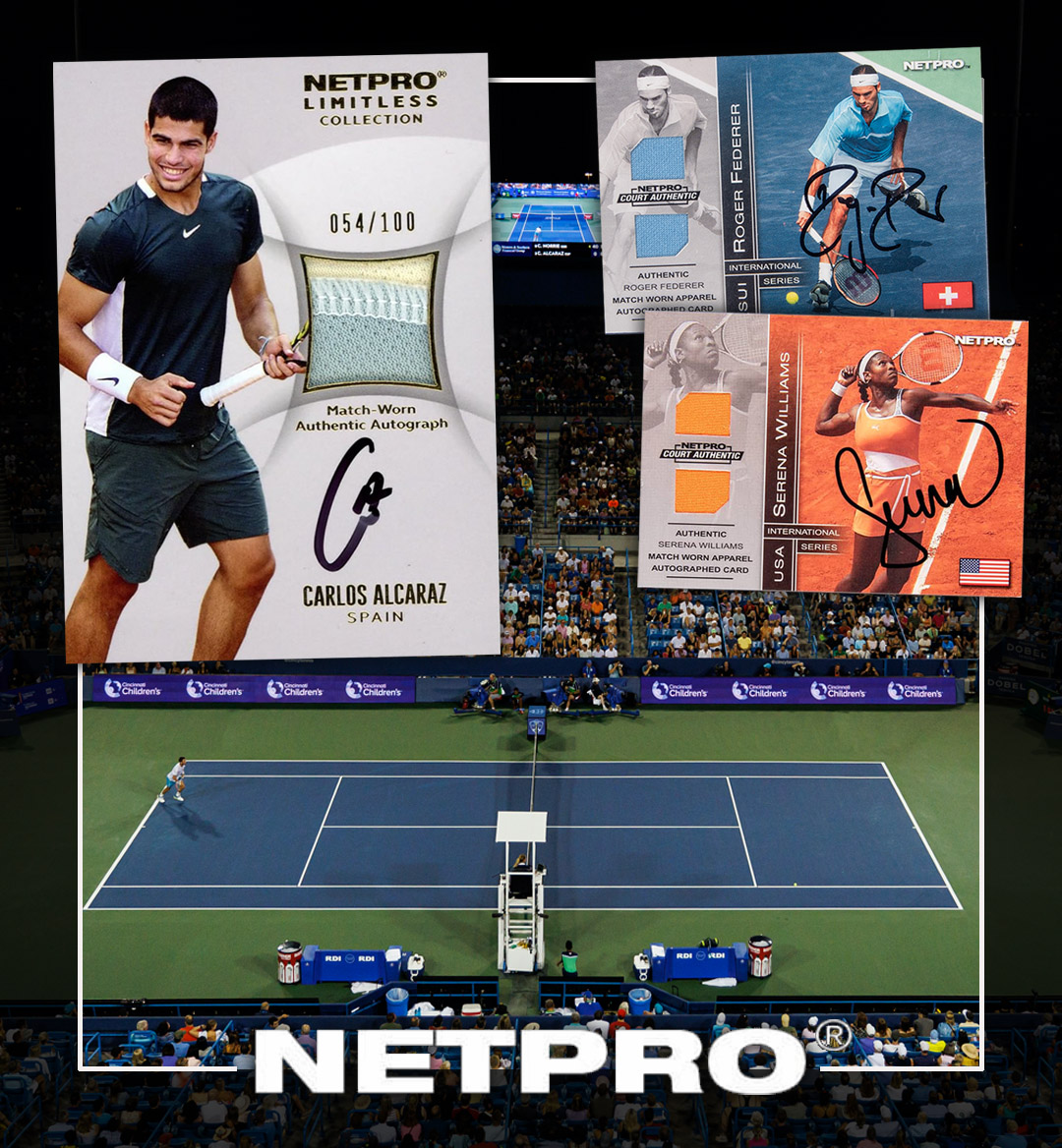 Before I dive in to the history of NetPro tennis cards, I first want to talk about the current state of tennis. With the U.S. Open inching around the corner, the tennis world is growing abuzz.  Millions will tune in to witness the best players from around the globe duke it out at one of the biggest events in the sport. This could also be the last time fans get to watch Serena Williams play, who announced her retirement a few weeks back.

Unlike most other mainstream sports, the tennis trading card industry has long been dominated by one company: NetPro.  The NetPro brand was the first to produce licensed trading cards of the biggest names in tennis way back in 1991.  And now, 30 years later, they are the premier name for tennis cards.

While the sport itself is ramping up in anticipation of next week’s U.S. Open, NetPro has also been in the lab creating new collectibles.  It was announced in May that the brand had signed an exclusive deal with young phenom Carlos Alcaraz, who has reached #4 in the ATP Rankings at only 19 years old.

With a major tournament and a slate of new releases lined up for next week, it seems only fitting that we outline the history of NetPro tennis cards. We will highlight some key sets from over the years and their accompanying market, which include some pretty enormous sales. Let’s jump right in and talk about the best tennis cards of all time and the brand behind them! 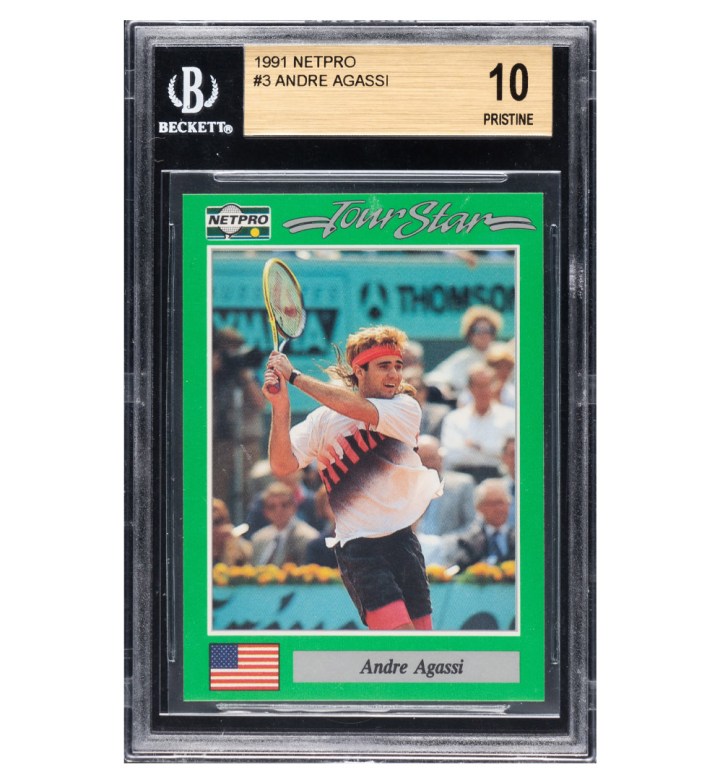 NetPro’s inaugural 1991 Tour Stars set featured some of the first licensed cards for many of the game’s greatest. This included Andre Agassi and Pete Sampras.  Interestingly enough, only 2,311 cards have been graded from this set, which seems low when compared to other flagship releases in the junk wax era.  The bold green border gives the card some flair, but it also made many of the copies a tough grade.  For example, the Andre Agassi RC shown above is a pop 227 as a PSA 10 and only a pop 9 with Beckett. This made the latter a very sought-after piece.  It has sold for as high as $3,120 back in April, but that number will pale in comparison to some of the cards from the 2003 set. 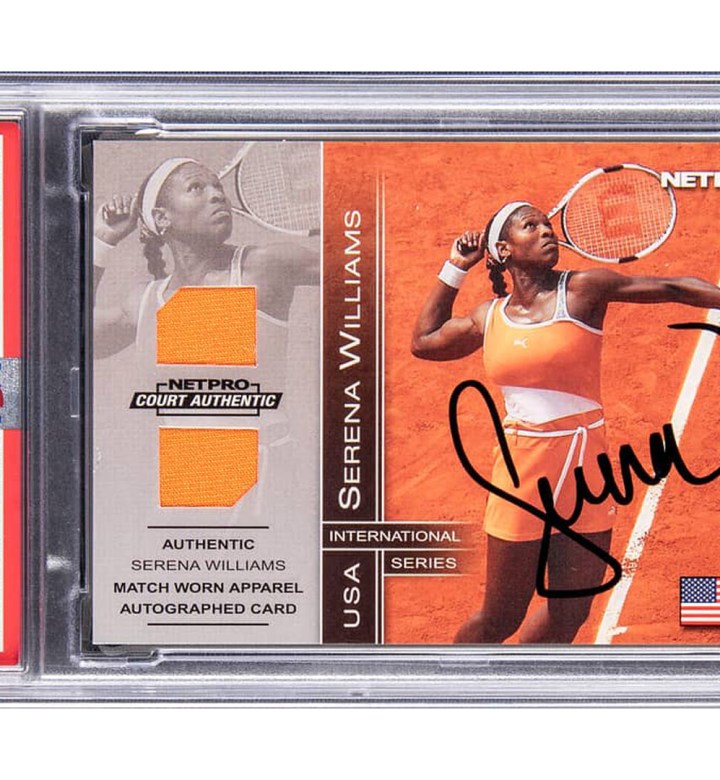 2003 was a year in the hobby where we saw the origins of many generational athletes. In basketball, we got our first cards of LeBron James.  In soccer, we got RCs of Cristiano Ronaldo.  And in tennis, NetPro produced the first licensed rookies/autographs of Serena Williams.  Regardless of what happens at the U.S. Open, Serena’s legacy has been cemented as not only one of the greatest tennis players of all time but as one of the greatest competitors in the history of sports.

While none of her cards have reached the million-dollar mark yet, the hobby is beginning to recognize just how valuable her rare rookies will be down the road.  Her 2003 NetPro International Series Apparel Autograph sold for $266,400 back in May. This marked the most expensive sale for a tennis card. And yet, Serena is still not the only noteworthy player with cards in the 2003 releases. 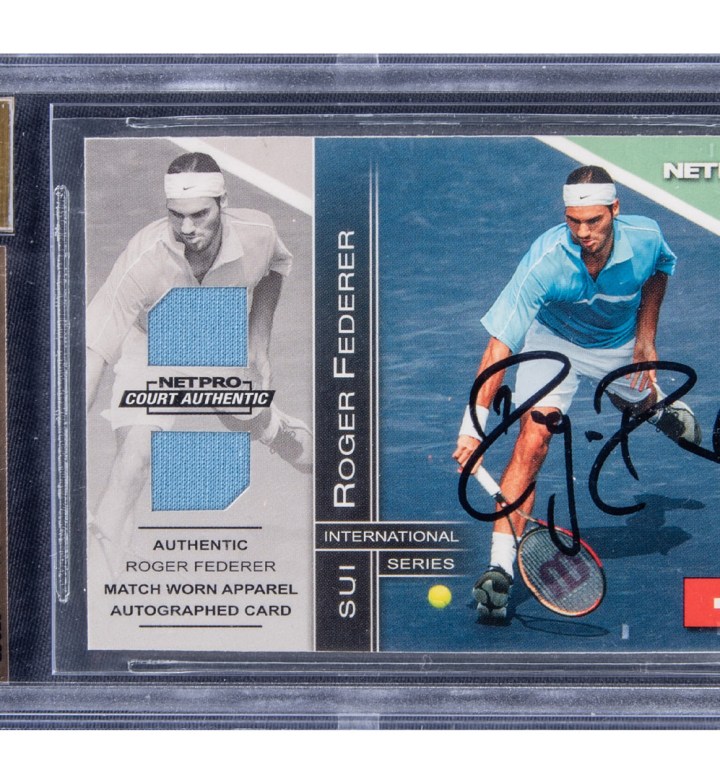 That same 2003 International Series also contains the first patch autograph of Roger Federer, a player whose name is etched on 20 Grand Slam trophies. The Swiss-born pro was once at the top of the world rankings for over 237 straight weeks. This stunning Beckett 9.5 copy reached a final auction price of over $181,000 in 2021. It is the definitive holy grail piece of one of the most recognizable names in tennis. 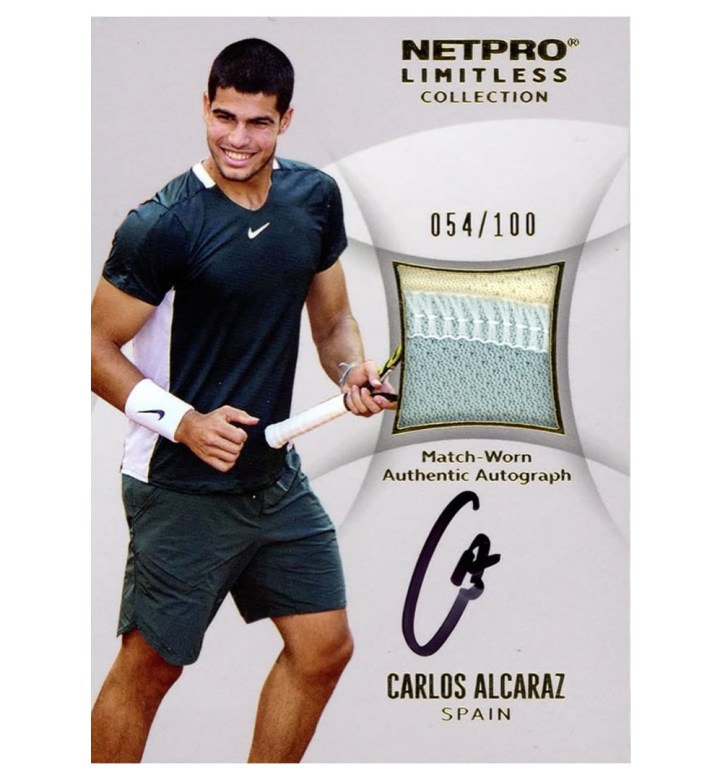 I was able to get in touch with the folks at NetPro ahead of their upcoming releases. We talked about the evolution of tennis cards and some specifics about new sets in the works. With many exciting developments to look forward to, here’s what they had to say about the future:

"NetPro has decided to focus on individual player drops. Each unique design will carry forward with the next athlete who will be announced in the near future. We are taking a page from the precious metals industry as this is the same format with how many rare coins are released today.

Carlos Alcaraz was chosen to be the first card in the new release for many obvious reasons. We spared no expense in putting these cards together, and we believe collectors will be very pleased with the result. If someone wants the first licensed cards of Carlos Alcaraz, this is how they can get them.

Our match-worn memorabilia cards have extremely limited production runs.  We issued only 50 Retro 2003 International Series cards and 100 of the Limitless Collection card. The match-worn material is not just from any event, but it was the actual shirt Carlos Alcaraz wore during the 2022 French Open Grand Slam Tournament.

Carlos’ autographed rookie cards will be offered in unique designs with the following production runs - 50, 100, and 250 depending on the card you choose.

Collectors and speculators know exactly what they are getting when they order on NetProCards.com. We feel that by keeping each release extremely limited, our cards will not only hold their value over time but potentially rise substantially if the athlete performs. In the case of our initial 2022 release kickstarting with Carlos Alcaraz, we believe the sky's the limit. Look at what happened to the Roger Federer and Serena Williams 2003 signed match-worn rookie cards. They increased in value between 100X to 500X+ over the past 15 years.

NetPro is focused on bringing quality licensed cards of some of the brightest tennis stars to collectors. If you look back over the past 20 years, it is the legends (Federer, Nadal, and Serena Williams) who obviously have the largest collector base. While there are no guarantees, Carlos Alcaraz has every trait to become a future GOAT within the sport. He turned 19 four months ago, and he's already achieved more than many players have achieved in their entire careers! We've all been waiting for the next big tennis star once Rafa, Fed, and Djokovic moved on, and it sure looks like the future has arrived."

Are you going to be picking up any Carlos Alcaraz rookies? Let us know @CardTalkPod on Instagram and Twitter!