How the NFL Playoffs Have Affected the Card Market 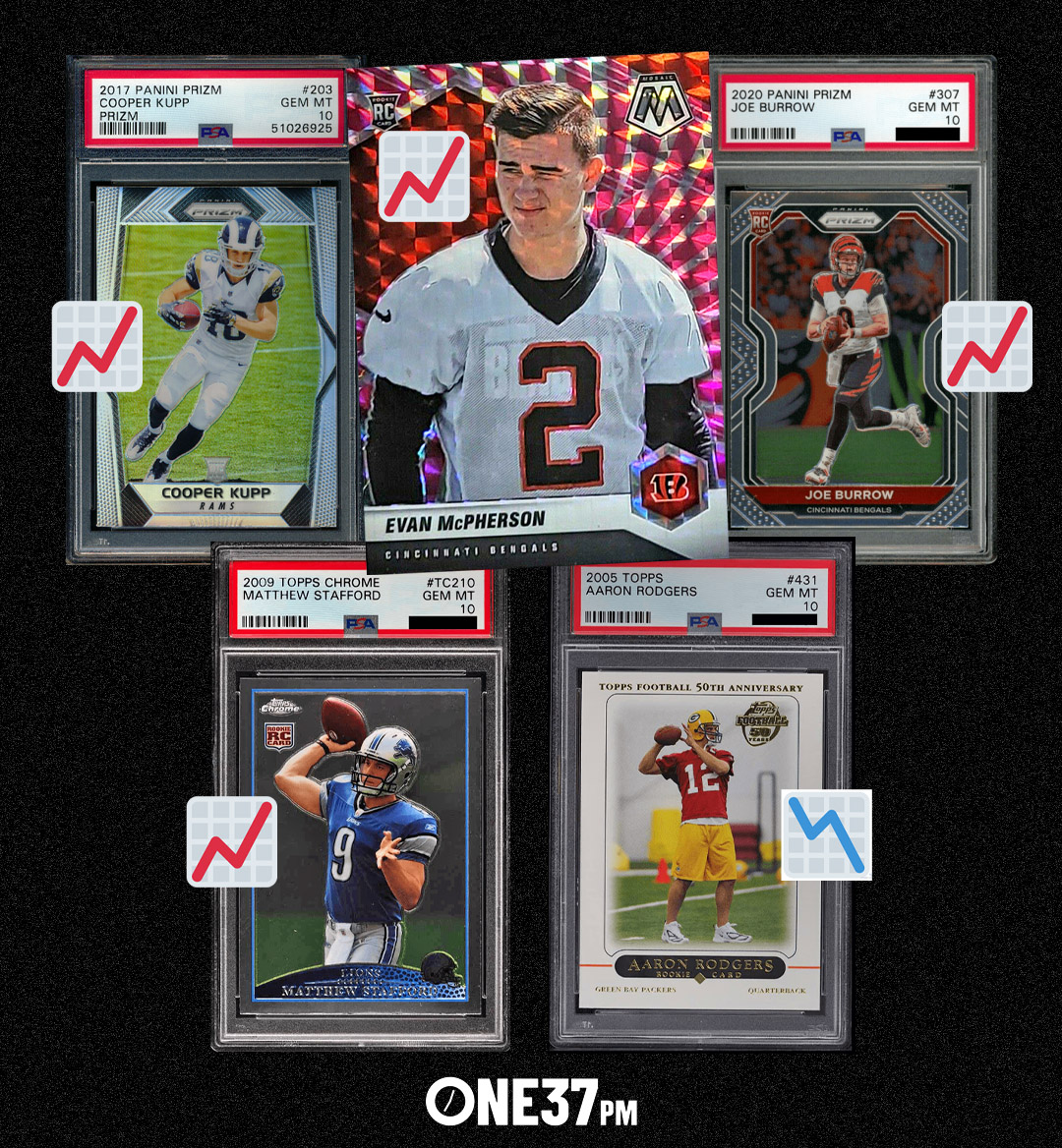 The 2022 NFL Divisional Playoff round was possibly the most wild and exciting weekend in the history of the sport, with all four games decided in walk-off fashion.

When the dust settled, three road teams advanced to Championship Weekend with the Bengals, 49ers and Rams all winning in hostile environments, while the Chiefs needed overtime to take care of business at home in one of the best football games you'll ever see.

These games had extremely polarizing effects on the football card market, with the values of some of the winning team's stars skyrocketing, while the cards of some of the players sent packing took a nosedive.

Let's take a look at ten of the most important players and how their rookie cards have performed from before the playoffs began until now. 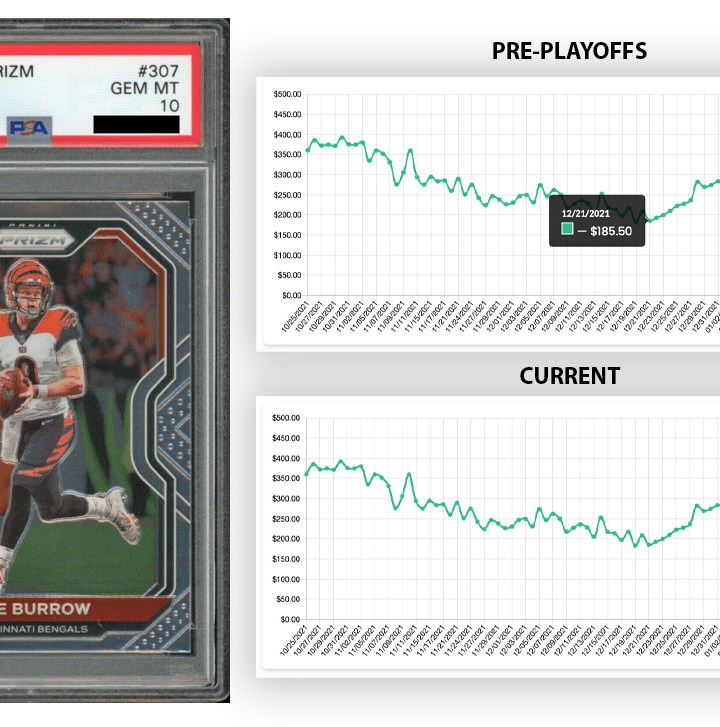 Joe Burrow didn't play his best game ever in Tennessee, but he did what he needed to do to escape with a win. He was sacked nine times (an NFL playoff record) and was under pressure all day, but still managed to throw for 348 yards including a perfect strike to Ja'Marr Chase to set up the game winning field goal.

It will be interesting to see what happens to these prices if the Bengals advance to the Super Bowl with a win over the Chiefs on Sunday. 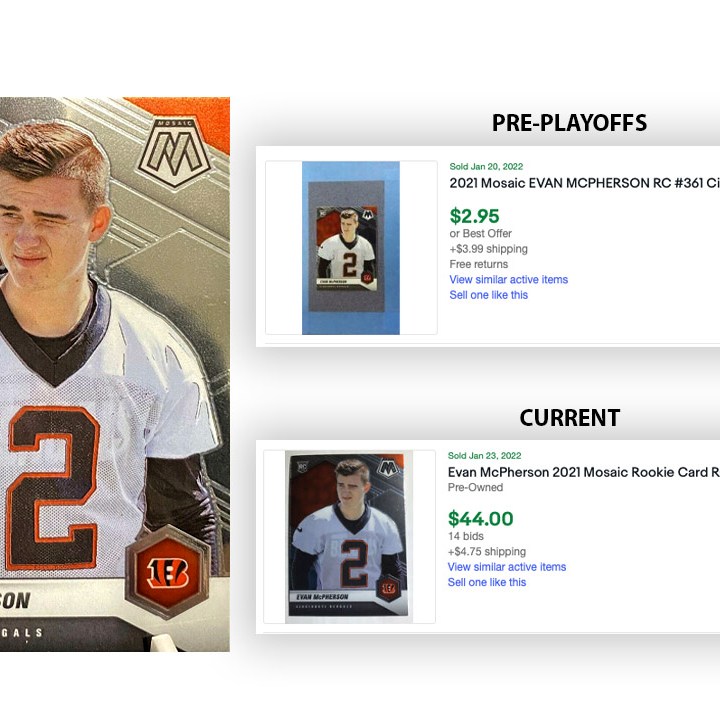 "Shooter" McPherson had an all-time great game for a kicker in Tennessee, splitting the uprights on all four of his field goal attempts including the game-winner as time expired from 54-yards out.

The game has earned the 5th round draft pick out of Florida legendary clout amongst Bengals fans, with the Bengals tweeting this after the game:

THAT'S WHY YOU DRAFT A KICKER!

His raw Mosaic base cards that were selling for under $3 before the game saw an enormous rise, with one selling at auction for $44 shortly after the game. We even saw his Pink Swirl Mosaic Prizm /10 sell for $390, which will likely go down as an all-time overreaction purchase.

With that said, if a Bengals fan bought this card because he loves the team and the player, more power to them. Collect what you love! 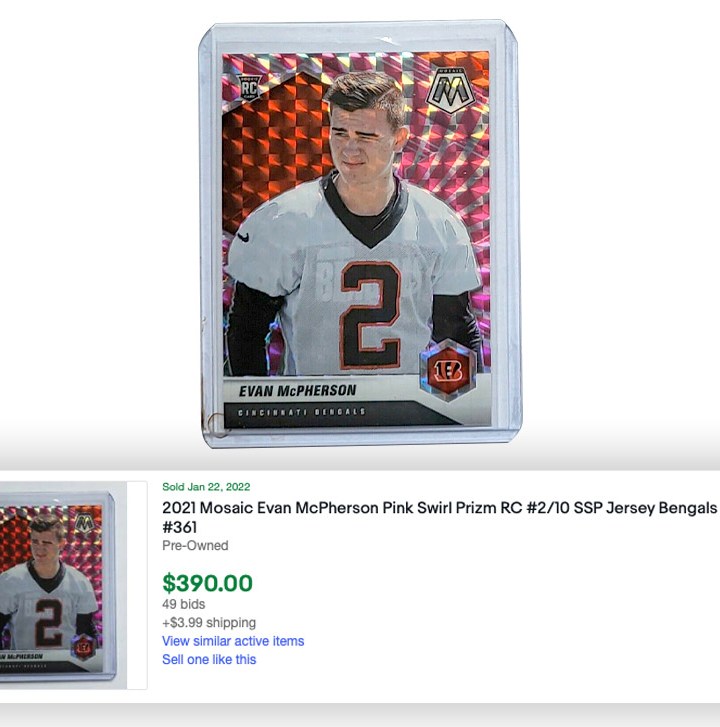 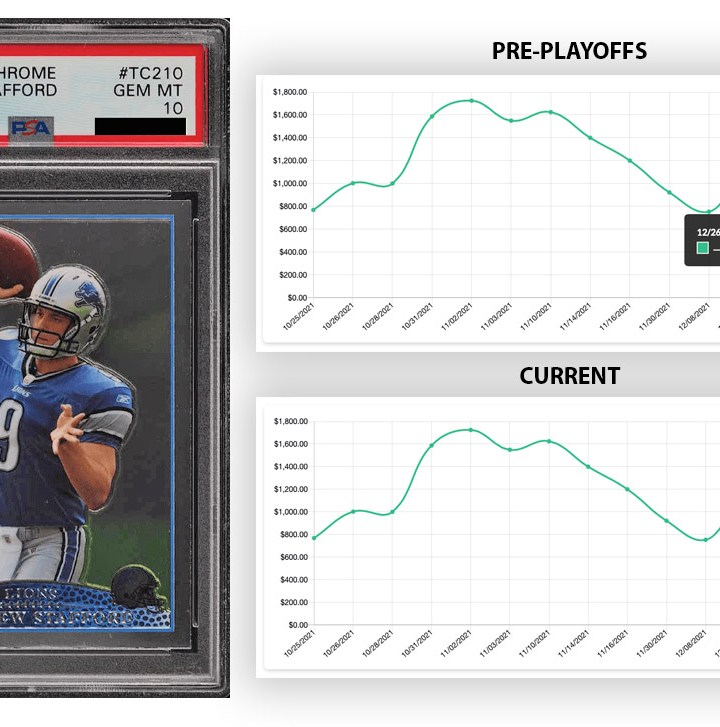 If it weren't for the Chiefs vs. Bills game that followed shortly after the Rams and Bucs, this game would likely be called the craziest playoff game ever.

The Rams led 27-3 in the 3rd quarter before watching Tom Brady work his magic and tie the game up at 27 with just :42 left to play. However, that was enough time for Matthew Stafford to hit Cooper Kupp twice, first for 20 yards, and then again for 44 yards to set up the game winning field goal as time expired.

Stafford's cards were hot early in the season, but cooled off in a major way as the season progressed. On 12/26, his Topps Chrome PSA 10 rookie bottomed out at just $503 after selling for almost $1800 in early November. However, it has rebounded nicely with a sale at $950 after the game. 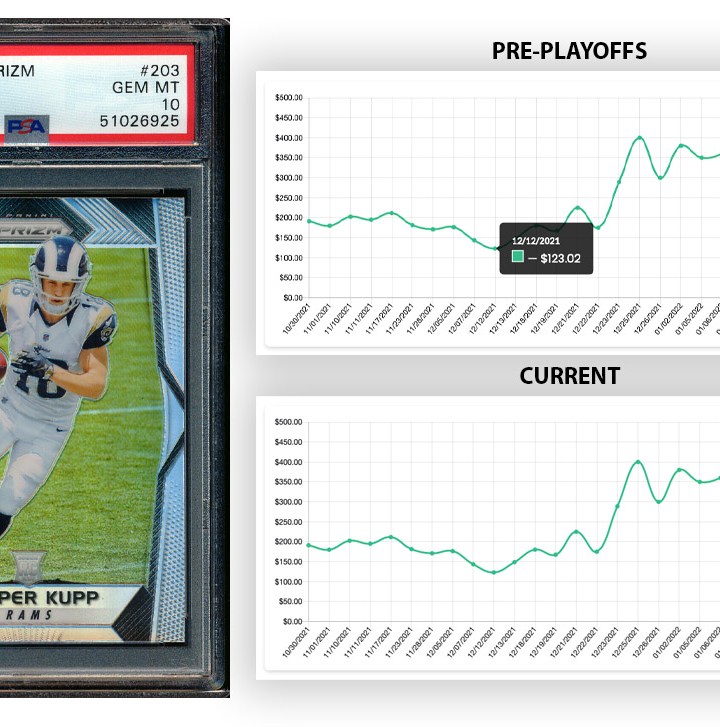 Cooper Kupp has turned in to an absolute superstar this season, but as things typically go with wide receivers in the card market, he was generating very little respect amongst collectors.

That has changed significantly.

His 2017 Prizm PSA 10 rookie was hovering around $200 all season long, hitting a low of $123 on 12/12. However, after earning the wide receiver triple crown for leading the league during the regular season in receptions (145), receiving yards (1947) and touchdowns (16), while putting up an eye-popping 9 catches for 183 yards and a touchdown against the Bucs, his cards are going to the moon. The same card sold for $450 after the game and if the Rams pull off a win against the 49ers at home next week, they could go even higher. 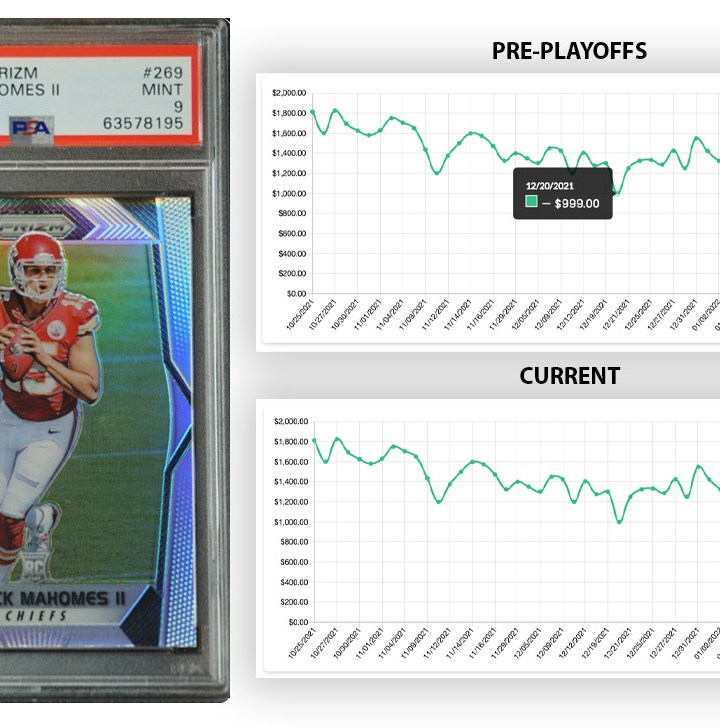 Patrick Mahomes had a game for the ages against Buffalo, further adding to his growing legacy in Kansas City. His box score was absolutely ridiculous, throwing for 378 yards and 3 touchdowns, while running for another 69 yards and a touchdown. The interesting thing with Mahomes is that winning games like this seems to have already been built in to his card prices. 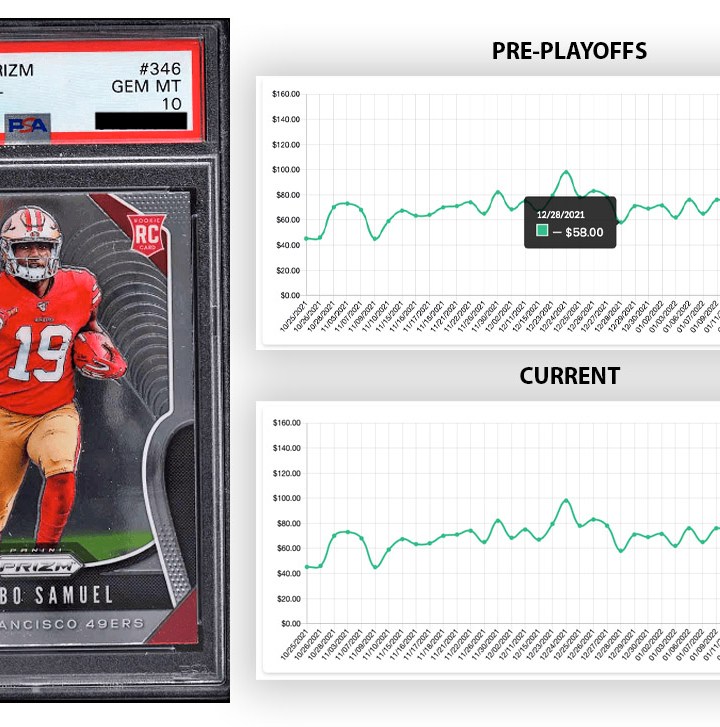 Deebo Samuel's cards have followed a similar path to Cooper Kupps, and while he was held in check in the 49ers huge win at Lambeau Field, his card prices continue to soar.

Deebo has become a bona fide star this season, acting as both a wide receiver and running back, and will obviously be a major part of the 49ers game plan in Los Angeles. If they pull off the victory and he has a big game, it could be enough to send this card to new highs. 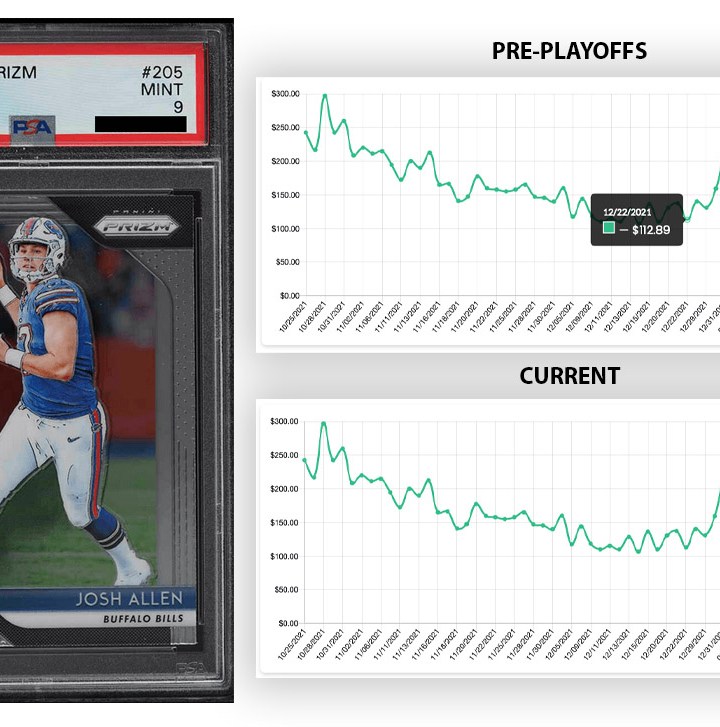 What can you say about Josh Allen in this heartbreaking loss for Buffalo? He flat out balled on Sunday. In one of the most impressive showings for any player in NFL history in a loss, it's a real shame that we didn't get to see him get one more chance in overtime.

While his 329 yard, 4 touchdown performance didn't earn him a win and a trip to the AFC Championship game, what it did earn is respect among those who still doubted him. He will be a star in this league for many years to come. 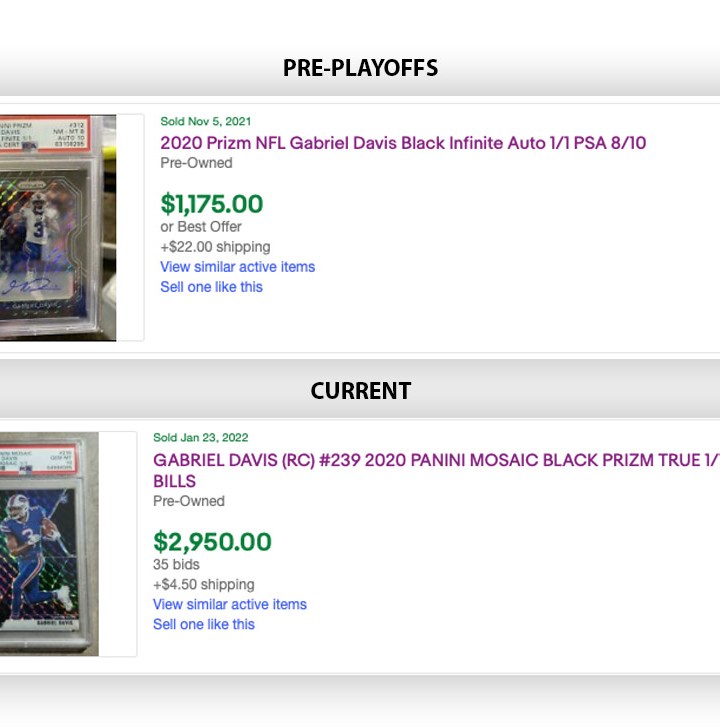 What an all-time performance for Gabriel Davis against the Chiefs with 8 catches for 201 yards and 4 touchdowns after putting up just 35 catches for 549 yards and 6 touchdowns during the regular season.

Clearly, the game did wonders for Davis' value in the market. However, it seems to be an overreaction to pay almost $3000 for a Gabriel Davis card based on one huge playoff game, considering his overall body of work. 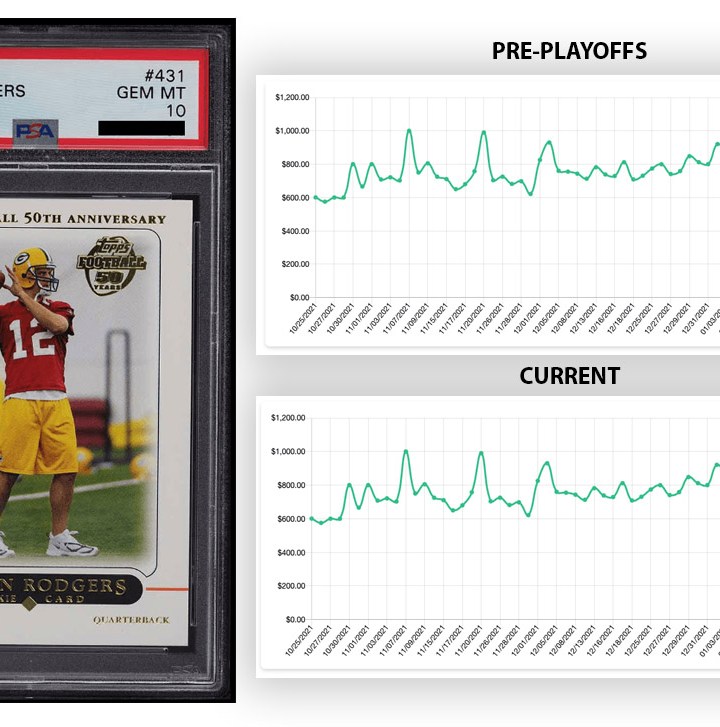 Aaron Rodgers legacy is an interesting one. He is about to win back-to-back MVP awards, joining Peyton Manning, Brett Favre, Joe Montana and Jim Brown as the only players in NFL history to accomplish that feat.

However, he is only 11-9 as a starter in the playoffs throughout his career and he has come under fire from football fans this year for his actions and outspoken takes on NFL covid policy.

While his play on the field has been first ballot hall of fame worthy, he hasn't exactly endeared himself to fans this season and his cards are paying the price after another early playoff exit.

With that said, I expect his cards to receive a significant bump if Rodgers does decide his time with the Packers is over and he goes elsewhere this offseason. Imagine if he signs with Pittsburgh to replace Big Ben?

My advice would be to NOT panic and sell right now. 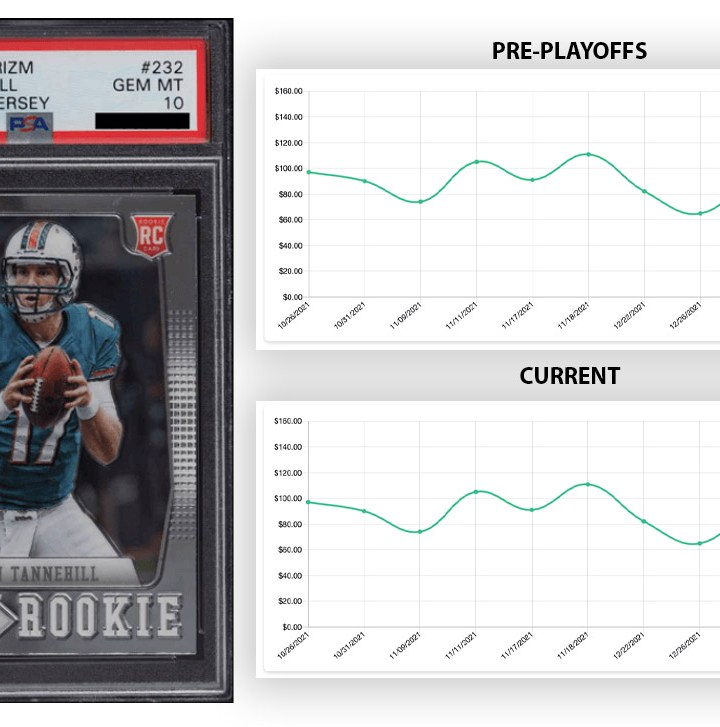 He had an all-time bad performance on Saturday for the Titans, crushing their hopes of moving on to the AFC Championship game one interception at a time. The first one came on his first pass, the second one inside of the Bengals 10 yard line as they were about to score a touchdown late in the 3rd quarter, and the third one on his last pass of the game, setting the Bengals up for their game winning field goal. It comes at no surprise that whatever value his cards did have entering the playoffs took a major hit after the loss.

It's possible that his time as Titans start is over after that stinker. With Derrick Henry, AJ Brown and Julio Jones on board, if the Titans were to upgrade at the quarterback position to a guy like... Aaron Rodgers (imagine?!) they would likely be the front runners to come out of the AFC next year.

With that said, I have no doubt that Tannehill would get another starting job in the league. He has won way too many games not to get another chance.