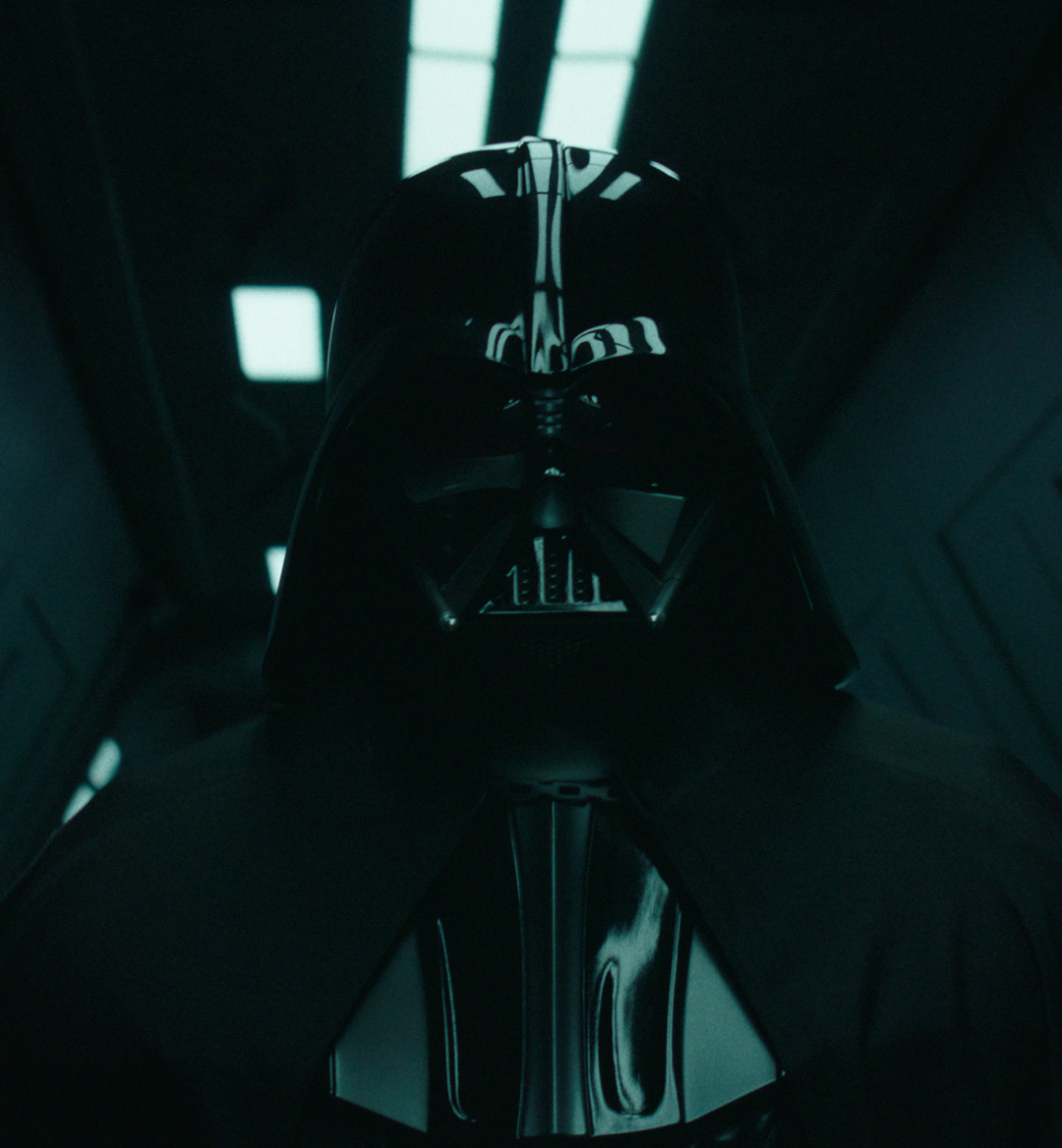 If you have been looking for some more Darth Vader since Obi-Wan Kenobi started, you sure got plenty of the Sith Lord this week. In "Part 5," the show explores the aftermath of Obi-Wan's rescue of Leia from the Fortress Inquisitorius in "Part 4."

Naturally, the Empire was not going to take such a thing lying down, and after Reva placed a tracker on Leia's droid friend Lola, Vader was hot on Obi-Wan's trail.

The Good Ol' Days and the Pretty Terrible Present Ones

Did you want more Hayden Christensen? Because Disney heard your pleas. "Part 5" opens up with a flashback that will make any die-hard Star Wars fan happy.

Anakin and Obi-Wan are training at the Jedi Temple, and based on their looks, it is either during or just before Attack of the Clones: Obi-Wan has his fantastic flow, and Anakin has the Padawan braid.

They are practicing dueling, and in what is no doubt of sign of tragedy that is to come, they are relatively evenly matched. We flash back and forth from the past to the present as we see that this is Vader remembering what it used to be like with Obi-Wan.

Before the Empire, before his fall, and before all his pain and suffering.

Reva arrives on Vader's ship, where she informs him of the latest news and that Obi-Wan has arrived on Jabiim. In recognition of her achievements, Vader gives her what she wants and names her Grand Inquisitor.

As Obi-Wan arrives on Jabiim, he comes across our old friend Haja who was forced to flee Daiyu after getting into his "fight" with Reva. He's now wanted by the Empire, so he's decided to join up with Roken and Tala's Resistance cell.

Obi-Wan asks Roken to help get Leia back home to Alderaan, but he tells Obi-Wan that they need to get the people out of there as they've been waiting to leave for months. They used the resistance's ships to help rescue Leia, but now they need to get back to business. Obi-Wan agrees to help them out in the meantime.

We return to Vader on his ship, where Reva informs him they are nearly at Jabiim. Reva intends to attack them immediately, but Vader wants to seal them in and crush Obi-Wan's spirit.

Due to the tracking device planted on it, Leia's companion LOLA is now evil LOLA, and it causes the blast doors on the facility to close prematurely, sealing in the resistance members and the civilians. Vader's ship has arrived above, and Obi-Wan knows the attack will be coming soon.

In the past, Obi-Wan and Anakin continue their training duel, with Obi-Wan calling out his Padawan for being too aggressive: "A Jedi's goal is to defend life, not take it." Anakin responds that mercy won't defeat an enemy and believes Obi-Wan will lose because of that compassion.

Obi-Wan speaks with all the civilians, telling them they must hold the Empire off so they can get away. They don't have to beat them here today, but they, unfortunately, need to fight. As the resistance prepares, Reva and a battalion of stormtroopers arrive and begin to break through the blast door of the complex.

Roken tries to get the hanger roof open but is getting nowhere fast. Haja suggests that they go in the vents to figure out a better way, to which Leia volunteers. Roken is initially against it, but after Obi-Wan backs her up, he agrees to let Leia give it a shot.

Obi-Wan gets a message from Bail, who has grown increasingly worried over his status. He tells Obi-Wan that if he doesn't hear from him soon, he will head back to Tatooine to help watch Luke.

Tala meets with Obi-Wan and reveals a bit more of her past, saying that the Empire told her that her mission was originally to round people up for not paying taxes. In actuality, they captured four different Force sensitive families and handed them to the Inquisitors. Fourteen people were killed, including six children, so now Tala helps fight the Empire.

They are both trying to outrun their past but know that the only way to heal is to fight to improve things.

The blast door to the complex is nearly broken through, but Obi-Wan moves to negotiate with Reva through the door.

Obi-Wan speaks with Reva through the door, where we learn more about who the Third Sister (and new Grand Inquisitor) is. Obi-Wan asks her how she knows who Vader is, and he figures out (as many of us had suspected) that she was a Youngling at the Jedi Temple during Order 66.

She grows increasingly frustrated, eventually telling him everything. She saw Anakin killing the Jedi at the Temple, she thought he was there to help, but he murdered the rest of her friends. She played dead, hiding amongst the bodies. Obi-Wan realizes that she isn't serving Vader but is plotting against him, waiting for her chance to get her revenge.

Reva asks where he was during the attack on the Temple and why he didn't help her. He initially offers to help her, but she refuses because they both have different ideas in mind for Vader's end. She seeks his death, but Obi-Wan remains conflicted.

Ever overconfident, Reva believes she can take Vader alone and proceeds to cut through the door, and a firefight ensues, with the stormtroopers breaching the base.

Tala and her droid compatriot, Ned-B, along with Obi-Wan and some other Resistance fighters, hold the troopers off long enough for the civilians to reach the hanger where the shuttles are.

Unfortunately, Tala is shot, along with Ned-B, and she tells Obi-Wan to get out of there. He tries to reach her, but as her droid leans down to protect her and is lit up, she pulls out a thermal detonator and sacrifices herself, saying, "May the Force be with you," as the doors close.

Vader is informed that they have Obi-Wan and the resistance boxed in, and he tells the soldiers to stand down until he arrives. Obi-Wan knows that the only way to stop this is if he surrenders to Vader, luring him into a trap to kill him. He gives his weapons to Haja, telling him to look out for Leia. He tells Roken and Haja that there are more ways to fight than using weapons.

As the stormtroopers bring Obi-Wan out to Reva, she lets him know that Vader is coming for him. However, Obi-Wan pulls the old Uno reverse card on her and says, "You're not bringing him to me; I'm bringing him to you."

Obi-Wan makes one last attempt to get Reva to allow the civilians to flee, saying that if they work together, they can take down Vader. He's so blinded by hatred of Obi-Wan then she can make her move and kill Vader.

In the past, Anakin and Obi-Wan continue their duel, with Anakin seemingly emerging the victor after disarming his Master. However, Obi-Wan teaches him a very valuable lesson: His need for victory blinds Anakin to what's right in front of him.

Obi-Wan isn't held by the stormtroopers long, disarming and killing them. Meanwhile, Leia is still working on opening the hangar doors and is attacked by LOLA until Leia figures out that the droid has a tracker on it. She removes it, and LOLA is once again her best friend, and she successfully manages to open the hangar doors. Leia reunites with Obi-Wan, and he gets onto one of the transports with her.

Marching through a sea of dead stormtroopers, Vader catches up to the ships and, in full-on Dark Side mode, rips one of the ships right out of the air and forces it to crash with the Force. He then tears the doors off the ship, seeing that it was on Autopilot and there's no one on it. Then, another ship flies off, with Obi-Wan escaping his clutches again.

Vader remembers his and Obi-Wan's training duel and how he thought he had defeated him then. Obi-Wan used the Force to take Anakin's lightsaber from him, showing that he still had much to learn.

"You're a great warrior Anakin, but your need to prove yourself is your undoing."

As Vader looks to the sky, Reva sneaks up behind him and attempts to strike him down but is stopped by Vader using the Force. Knowing that Obi-Wan had used Reva against him, Vader admits that his former Master was wise in this instance.

Reva attempts to kill Vader, but he toys with her, not even pulling out his lightsaber to stop her. He moves and dodges her attacks, using the Force to prevent her lightsaber from spinning, and breaks it apart, tossing one half to her.

She is hardly a match for him, and despite disarming him at one point, he rips her lightsaber from her and the other as well. She flashes back to seeing Anakin stab her as a child, just as he stabs her again in the present.

He knew all along what she was planning to do and, as a final twist of the emotional lightsaber, calls her Youngling, saying she is of no further use to him.

Then it's revealed that the Grand Inquisitor survived her attack and that he and Vader will leave her here to die, "in the gutter," as he puts it. As she lays there, struggling to maintain consciousness, she discovers Obi-Wan's communicator and sees the broken message from Bail, revealing that one of the children is on Tatooine.

Obi-Wan senses this, knowing something is wrong. We then cut back to Tatooine, and the episode closes with a shot of a sleeping Luke Skywalker.

Probably the best entry thus far, Obi-Wan Kenobi's "Part 5" stretched across the past and the present and did so brilliantly. Framing it around a training duel in the past that mirrors the present thematically, we get a better look at how Vader has yet to learn from his failures. Not to mention, it was great to see Hayden Christensen back as Anakin; the nostalgia was on POINT in this episode.

From a story perspective, we got answers to some of our questions. We see why Reva is doing what she's doing with such ferocity, whether or not the Grand Inquisitor survived her attack and more. It also sets the stage well for the finale, with everything, as expected, converging back on Tatooine. Reva is aware of someone important to Obi-Wan's presence, so there's no better place to lay a trap for him and Vader.

Outside of the narrative, it's unfortunate that the editing and direction of this show still remain sloppy at times. The sequence in this episode where the Rebels and stormtroopers are having a firefight 5-10 feet away from each other felt hastily edited and looked goofy.

Obi-Wan Kenobi has just one episode left, so it was smart to use this one to tie up a few loose story threads, especially with Reva's backstory. Next week will likely see the two former friends have another climactic duel as we head towards the finish.