From Heisman to Highsman: How Ricky Williams Has Grown Since the NFL 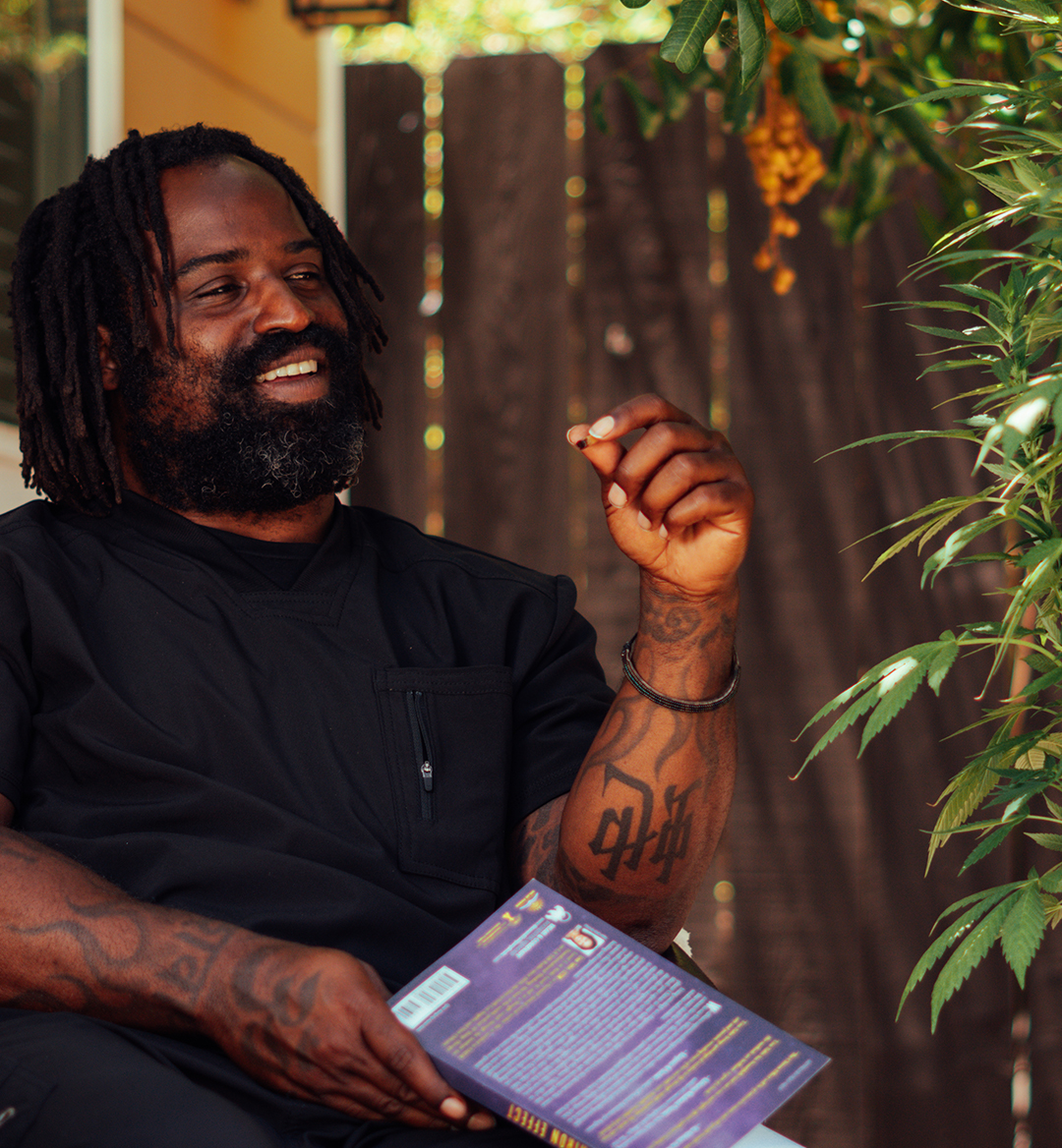 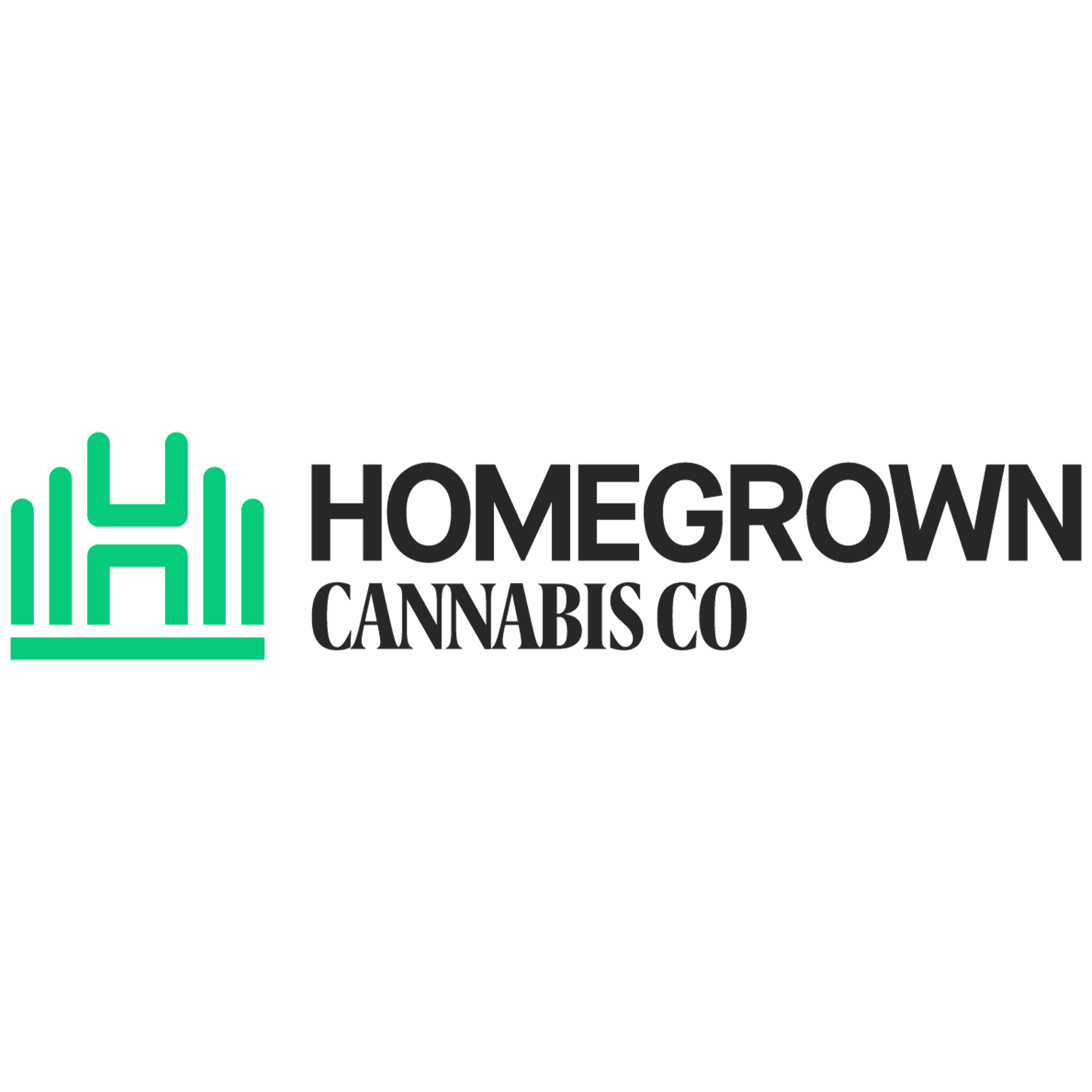 Ricky Williams is a giant.

He looks like he could throw you from one side of Miami Gardens to the other, without spilling his drink. But that’s the last thing you’d expect from such a good-natured, pleasant, and engaging soul like Ricky’s.

If you looked over his shoulder a few years ago, you’d likely see a football stadium. You’d hear the roaring thunder of the fans, the crack of shoulder pads, you’d smell hot dogs and body odor and you’d be screaming for the Dolphins.

Zoom out now and you’re more likely to see rows of quiet plants. You’d see Ricky with a watering can or a mister, and you’d smell something far, far more enticing.

Not content with simply consuming cannabis (he has his own range of flower, Highsman), Ricky, like many Americans since the end of prohibition, learned to grow his own. And to grow his own naturally, from seed.

What better way to follow his dream than to team up with the Homegrown Cannabis Co, who themselves have some interesting partnerships. They have indoor expert Kyle Kushman, they have their own outdoor, greenhouse and hash experts (see Nikki Lastreto & Swami Chaitanya, Eric Brandstad, The Dank Duchess), not to mention a close collaboration with the Father of the Cannabis industry himself, Steve DeAngelo. It’s little wonder Ricky chose a company with such a prestigious list of friendships.

Ricky’s as authentic as they come. His journey has many parallels with the rise of cannabis in the US. Cannabis grew from a vilified, demonized drug to a billion dollar industry, while Ricky grew from a troubled ‘baller to successful businessman, astrology expert and spiritual muse to thousands of adoring fans.

But where did Ricky’s journey with cannabis begin? What made him risk his football career for such a misunderstood herb? And what is it he finds so magical, so rewarding, so soulful and satisfying about turning a tiny seed into a giant, flowering cannabis plant?

Ricky, Weed and the NFL

It’s Ricky’s senior year at Texas and he’s just broken up with his girlfriend. To add humiliation to heartbreak, she immediately starts dating one of Longhorn’s quarterbacks. Ricky’s teammate!

One of Ricky’s friends had a suggestion: smoke some weed. It worked.

“The high was introspective. Calm. Like meditation. I made it a habit.” Ricky explains, “And as far as football was concerned, it actually made me a better player.”

Cannabis helped Ricky reflect on his on-field performances, it helped him analyze his game and make improvements. But there was a price.

“Pro-athletes and weed, it’s not a combination you hear very often. I often felt apart from my team, an outsider, especially during my early career.”

While his cannabis use led to feelings of conflict, Ricky knew he wasn’t doing anything wrong. Cannabis was natural. It was a plant. And it was keeping him centered.

It helped with the physicality of the NFL, too. Even after training sessions, most professional players are given a raft of injections for pain, inflammation etc. Ricky found cannabis worked a whole lot better than team doctors pushing opioids, at least for him. But this wasn’t a sentiment shared by many, especially those with the power to make or break careers.

Ricky would be suspended twice before finally hanging up his cleats. He was hounded by the NFL, forced to take more than 500 drug tests, and ostracized for his outspoken views on cannabis. Views that would only deepen in response.

Today’s NFL isn’t so draconian when it comes to weed. America as a society seems to have gone through its own introspection. Hostility has become acceptance. Ignorance has become understanding. Mandatory prison sentences have become jobs in a rapidly-growing industry. It’s all looking up.

It’s a change Ricky played a huge part in, setting the tone for his post-football growth. 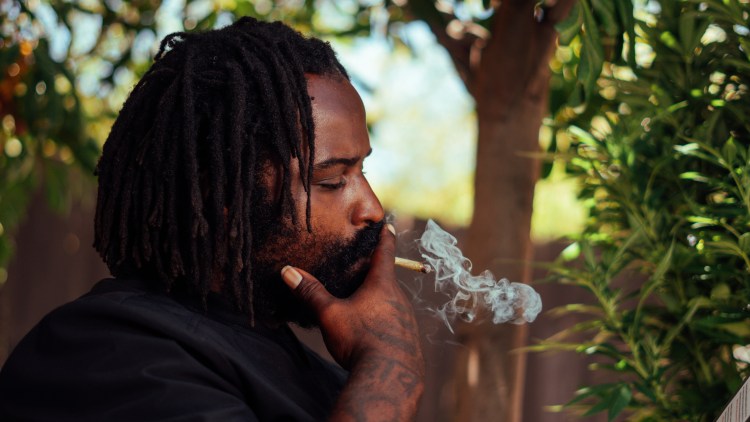 Grow Your Own Way

Ricky’s love of cannabis is no secret, and we’ll talk later about his superb range of Highsman flower. What’s less well-known is Ricky’s passion for home growing.

“There's something special about growing anything, especially something like cannabis that can open your mind and contribute to your spiritual growth. And to know that you can take a seed and put it in the ground and literally nurture yourself in that way, it’s truly something amazing.”

When it comes to the toke, he loves a powerful, cerebral sativa, but these aren’t the easiest plants to grow, especially for beginners. Sativas are taller, lankier plants. They take longer in flower than their indica or indica-dominant cousins, and require more light, more heat, and more skill. See below.

Classic sativa cultivars (we should stop calling them strains, it’s disrespectful… they’re plants, not bacteria) are challenging to grow. But Ricky loves them. So he gave Homegrown’s breeders a challenge. To develop easier-to-grow versions of his favorites. The result? Well, it took a long time to make him happy, to get the phenos just right, but see for yourself… 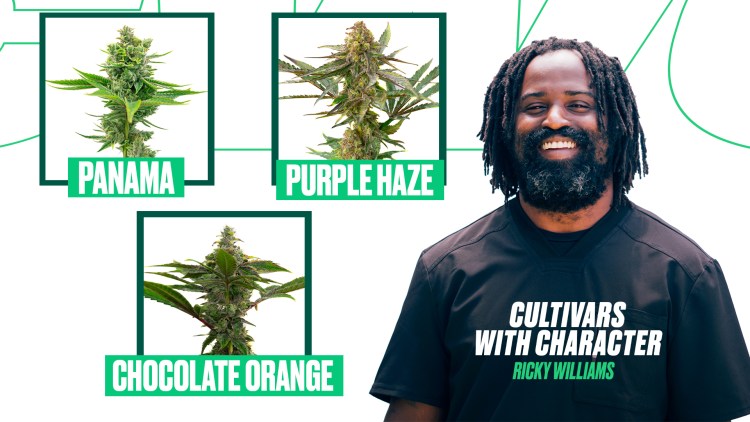 His choice of Homegrown cultivars is smart and relevant. They mean something to him. Much like his range of Highsman flower. You can enjoy his limonene-heavy Pre-Game, a refreshing sativa set to make you sparkle. You can relax with Post-game, a sweet indica that’s all about recovery. And you can always find room for Half-time, a delicious hybrid that delivers ‘a smooth, leveled euphoria’ perfect for time out of the game.

“I tested hundreds of cultivars before settling on the Heisman range, which was a lot of fun! Choosing the Homegrown seeds was different, more time-consuming, but I’m super-happy with the results. People are going to love growing my plants, they’ll find it therapeutic. There’s a certain serenity you can only achieve by spending time in the garden and nurturing new life.”

Written in the stars?

Growing cannabis is fairly predictable. If you give a plant too much (or too little) water, or you don’t feed it correctly, or starve it of enough light, you’re going to wind up disappointed. There’s cause and effect but at least you know you’re in control.

Ricky discovered something similar with astrology.

“Astrology gives you a rough outline of the life you’ll live. It’s by no means prescriptive, it’s more a template that shows how high you can reach.”

His discovery of astrology was somewhat fortuitous. Already a big fan of meditation, he visited a NorCal ashram in 2004, on his year out from the NFL. After the session, he met with the director, Swami Sita, who gave Ricky an impromptu astrological reading.

“I wasn't immediately hooked, but I for sure felt a moment of lucidity. Swami planted a seed that took more than ten years to grow.”

For Ricky, astrology provided enlightenment, a road, a knowledge of self that would make even time-served yogis jealous. He felt he understood his past, present and future with equal precision. It gave him the means to recognize and forge his own path. 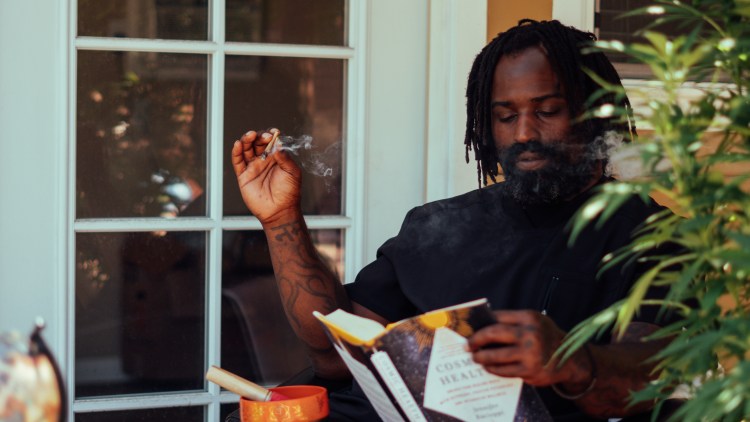 “Kyle Kushman tells us that once you learn the language of the plants, once you understand what they need and when they need it, you’re on the road to success. This might sound odd, but if you were able to produce the astrological chart of a cannabis plant, you’d see its capacity to become a huge, sticky, super-stinky beast, but you’d also perceive the potential for failure. The basic, abstract form of the plant is fixed. It’s up to the grower to produce something beautiful. That’s how it is with us, too.”

Ricky would love to combine astrology with healing, cultivation with meditation, perhaps creating his own holistic ashram with multiple paths to wellness.

“Yoga, meditation, readings, tending to cannabis plants in the garden, a place to smoke together… that sounds like the coolest place on earth.”

“I grow outdoors, at my place in Idyllwild. The San Jacinto mountains are a great place to cultivate cannabis plants. Long, hot summers. Not much rain. Spring starts slowly but by April we’re up into the 70s pretty consistently. I love sativas and sativas love Idyllwild. But it’s not just about being in the garden. There’s a bunch of amazing reasons to grow your own, not least because it’s now legal.”

The partial end of prohibition isn’t the only reason to make the step up from smoker to grower. Even complete first-time absolute beginners will likely end up with a better product, especially if you absorb all the free info and guides found at Homegrown.

You can grow safer weed, because you’ll know exactly what went into it. You’ll be the envy of your 420 friends. You’ll learn an amazing new hobby and you’ll likely start growing other things, too.

“I learned a lot from Nikki and Swami, Homegrown’s outdoor experts. They tell us that once you know how to grow cannabis, the temptation is to start growing your own herbs, your own vegetables. It connects you to the rhythms of nature and makes you feel whole.” 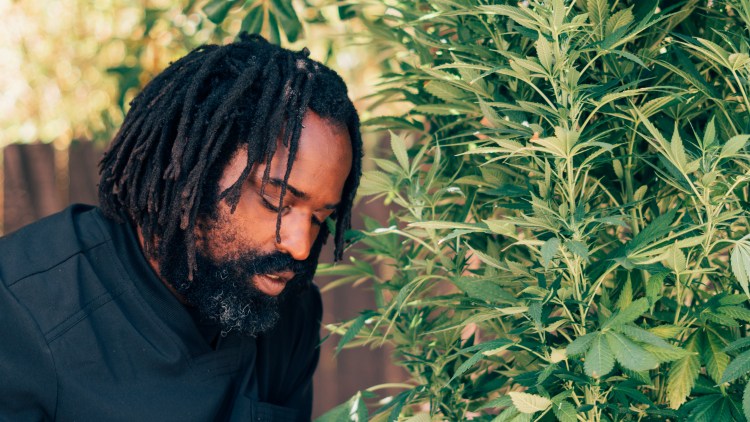 It’s not lost on Ricky that many growers cultivate primarily to save money, even with indoor set-ups. Homegrown cannabis is a far superior product and the cash savings can be staggering, especially for heavy tokers. It’s a win-win situation but Ricky wants more people to grow outdoors, naturally.

“Outdoor grows save even more cash. All you really need is sun, water, and nutrients. You won’t need lights or aircon or any expensive, energy-hungry equipment. At the most you’ll need a fan and maybe a dehumidifier for the drying room. But you’ll run these two weeks at most, not for the entire duration of the grow. And sun-grown weed is awesome. All the terps. All the THC. All the crystals. For me, it’s what it’s all about.”

If you’re interested in learning to grow cannabis, or checking out any of Ricky’s cultivars, please visit the Homegrown Cannabis Co.