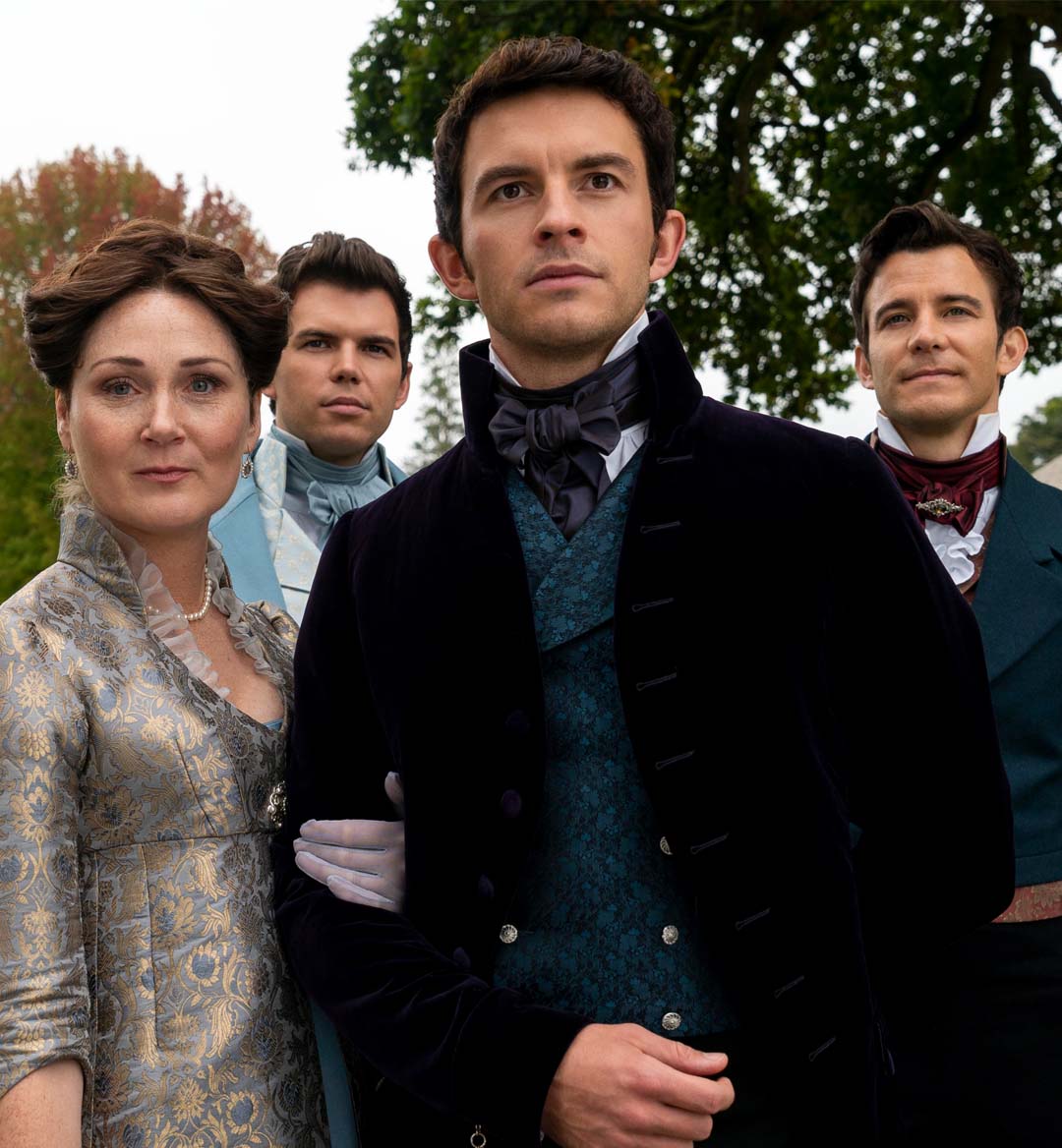 With a record-breaking first season and a second season that broke those records, Bridgerton is the most unstoppable show on Netflix, and given that they're already filming their third season, it's clear that they're not stopping anytime soon. These 21 shows like Bridgerton capture the essence of the series either in the time period they're set in or in how its characters navigate life.

The Great is set about 100 years before the events of Bridgerton, but even with that gap, the series evokes all of the same old-school feelings through its incredible use of costumes and sets. Though The Great is a comedy as opposed to the more serious nature of Bridgerton, both are by no means historically accurate, focusing on the development of the characters at hand instead of the history books.

Set a bit closer in time to Bridgerton, The Gilded Age brings the same level of drama, though it mixes in historical events of the time with the personal affairs of the characters in the show. Christine Baranski and Cynthia Nixon portray two very different sisters of "old money," while Carrie Coon takes on the role of a wife of "new money," creating a great divide between the two neighbors in New York City. Though it focuses more so on older characters, The Gilded Age is definitely one of the shows like Bridgerton that is closest fashion-wise.

Ah, Downton Abbey: the period drama of all period dramas. This show's influence truly knows no bounds, as it set the bar extremely high for shows of this type back when it first aired in 2010. Taking place in the early 20th century, Downton Abbey focuses on the inter-family drama of the Crawleys at their massive estate in England.

Based on the real-life reign of Queen Elizabeth and her family, The Crown tracks the Royal Family through all of its ups and downs, from Elizabeth's sudden rise to the throne to Princess Diana's induction into the family. The series has been praised time and time again for its stacked cast fit with unforgettable performances, especially those of Claire Foy, Olivia Colman, and Emma Corrin.

Though the series is based on the diaries of Anne Lister, Gentleman Jack is only semi-historically accurate. While many of the storylines in the show were heavily adapted from those very diaries, what really happened is still not completely known, so much of the show is based on assumptions. Regardless of that, the series stays true to the spirit of Lister and the trailblazing path she created for herself in England.

Hailee Steinfeld stars as Emily Dickinson in the aptly titled Dickinson, which follows the writer and poet as she gets a sense of the world she's living in and how she and her writing fits—or doesn't fit—into it. The series had a great three-season run, receiving mostly positive reviews and ending only because it was always meant to be three seasons.

The six-season-long Outlander sets its sights on Claire Randall (Caitriona Balfe), who's suddenly transported back in time from 1945 to 1743 while in Scotland with her husband. Finding herself in a completely new life, Randall has to carve out a future for herself and joins a group of rebellious Highlanders, embarking on a completely unknown journey.

Hulu's original series, Harlots, takes place in London in the 18th century and revolves around the owner of a brothel and her two daughters. However, when the business comes under fire, a new villain emerges, creating a divide between those who support and oppose the commercial use of sex.

While some have argued that Bridgerton is kind of a rip-off of Sanditon, the latter is actually based on Jane Austen's novel of the same name, which tracks Charlotte Heywood (Rose Williams) and Sidney Parker (Theo James) after Charlotte moves to Sanditon to open a new chapter of her life. While there, she's introduced to Parker, who decides to turn her new town into a massive tourist spot and resort. With its many parallels, Sanditon definitely solidifies itself as one of the main shows like Bridgerton.

No, not the magazine or the brand of paper plates.

Vanity Fair actually takes place right around the same time that Bridgerton does, except this series is based on the eponymous novel and tracks a young woman attempting to get herself out of the poverty that she currently finds herself in.

Lily James stars alongside Emily Beecham as two cousins looking for the perfect man in the early-mid 1900s. Though they're cousins, the two couldn't be more different, as Linda Radlett (James) is unapologetic and committed to finding the perfect man while Fanny Logan (Beecham) is more steadfast, narrating and leading us through her and her cousin's misadventures.

Gossip Girl's got all of the intertwined romantic drama just as Bridgerton does, though it's set in the modern world as opposed to the 19th century. And while the characters in Gossip Girl might not be royalty, they're certainly the modern version of it. In that sense, it makes this series one of the most unlikely shows like Bridgerton around.

Based on Phillipa Gregory's novels, The Constant Princess and The King's Curse, The Spanish Princess picks up directly after the Starz series, The White Queen, left off. Taking place in London in the 16th century, the series is all about Catherine, the Princess of Spain, and how her plans change after the man she was promised to marry suddenly dies.

A Netflix original series, The Cook of Castamar takes place about 100 years before Bridgerton and has a more gastronomic approach to things, as it follows the life of Clara Belmonte (Michelle Jenner), a chef who happens to take a job working in the kitchen of the Duke of Castamar (Roberto Enríquez). Their relationship evolves over the course of the series as they're both suffering from major losses in their lives at the same time.

Set just around the same time as Bridgerton in 1815, Belgravia is an adaption of the book of the same name by Julian Fellowes, who also happens to have served as a major writer and producer on both Downton Abbey and The Gilded Age, two other period piece series. Belgravia takes place in the eponymous London neighborhood and tracks the Trenchard family after they attend a ball on the same night as the Battle of Waterloo. As it takes place during the exact same time period, Belgravia has definitely earned its spot among some of the main shows like Bridgerton.

Adelaide Kane plays the Queen of Scotland, Mary Stuart, in Reign, which kicks things off with the Stuart attempting to get engaged to Prince Francis. However, the situation turns out to be a bit more complicated than expected as some personal and familial skeletons come out of the closet.

Cable Girls takes place about 100 years after Bridgerton and is set in Madrid, Spain, focusing on the first-ever telephone company to open up in the country. It follows the work and personal lives of four young women who work at the company, nicknamed the "cable girls" for their new jobs in the profession. While it doesn't take place during the same time period, Cable Girls is definitely one of the greater shows like Bridgerton, working in female independence and equality into its characters and plot.

Helen Mirren wows in this very limited, four-part series about the eponymous Catherine the Great, the basis of maybe one too many series and movies, but alas, this iteration finds Catherine much later in life during her oh-so scandalous affair with Grigory Potemkin. While Mirren was praised for her performance and secured a nomination for Best Actress at the Golden Globes, the show as a whole wasn't as well received.

An AppleTV+ original series, The Essex Serpent follows the aptly-named Cora Seaborne (Claire Danes) who moves all the way out to Essex in the UK in order to track an infamous and probably-fake serpent in the area. While there, she meets the pastor of the area, Will Ransome (Tom Hiddleston), and the two form an unlikely bond.

Based on the novel series of the same name by Winston Graham, Poldark is about Captain Ross Poldark's life upon returning home to England from the Revolutionary War in 1783. However, after being gone for almost three years, he finds his former life practically in shambles, forcing him to figure out how to move forward.

Based on Jennifer Worth's memoirs, Call the Midwife is exactly what it sounds like, although it's got a great comedic edge to it. The series revolves around a community of nuns and midwives in the 1950s, focusing specifically on Jenny Lee (Jessica Raine), though as the show progresses, we're introduced to an even larger slew of characters comprised of nurses, sisters, and more.

Watch on Netflix
Slide 1 of 3
Did you like this article?